Campus construction activity at Princeton during this academic year will focus on the Neuroscience and Psychology buildings, with important stages also under way on the home for the Andlinger Center for Energy and the Environment and Firestone Library, among other ongoing projects.

In addition, construction of the new Cordish Family Pavilion at the Lenz Tennis Center has been completed, and the High-Performance Computing Research Center is expected to open in mid-October. The work is part of the University's 10-year Campus Plan unveiled in 2008.

Updates on the following projects were provided by Anne St. Mauro, assistant vice president for facilities, design and construction, and Sean Joyner, deputy director of the Office of Design and Construction, except where noted.

• Neuroscience and Psychology buildings: After completing the structural steel work this summer, the metal decking and concrete slabs for floors currently are being installed at the site of the new Neuroscience and Psychology buildings, south of Icahn Laboratory and west of Washington Road. The 248,000-square-foot, two-building complex will house the Princeton Neuroscience Institute and the Department of Psychology. The work on the decks will be followed by placement of the mechanical and electrical infrastructure. The project, designed by José Rafael Moneo Vallés Arquitecto of Madrid, is expected to be completed in spring 2013.

• Andlinger Laboratory: The first step of a four-year process to build the new 127,000-square-foot structure at the corner of Olden and Prospect streets was completed this summer with the demolition of 86 Olden, the former site of the Fields Center. The Andlinger Center for Energy and the Environment was established in July 2008 to accelerate research on effective and sustainable solutions to problems of energy and the environment. As part of the site preparation for the home of the center, two stone lion statues were moved to a walkway at the southwestern corner of the Frick Chemistry Laboratory. Utility work also is under way at the site. The three-structure complex in the University's School of Engineering and Applied Science was designed by Tod Williams Billie Tsien Architects of New York. 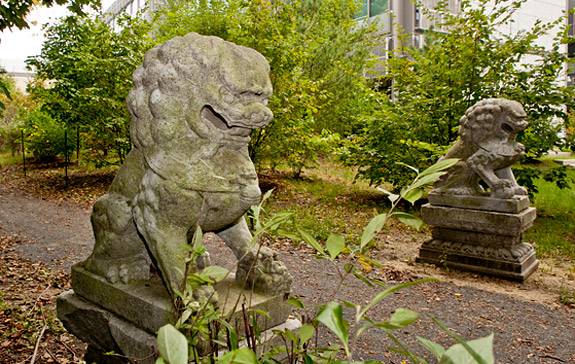 As part of the site preparation for the home of the Andlinger Center for Energy and the Environment, two stone lion statues were moved from 86 Olden to a walkway at the southwestern corner of the Frick Chemistry Laboratory. (Photo by Denise Applewhite)

• Firestone Library: The comprehensive renovation of Firestone Library, which will be done in multiple stages over the next 10 years, has entered the second phase, according to Jeffrey Rowlands, director of library finance and administration. The library will remain open and occupied throughout the project. This fall, the focus is on demolition work on the A level, in preparation for construction work starting in late January. Partition walls have been erected, and carrels and study areas in this zone have been relocated. For student use, 200 storage lockers have been placed near reading tables and open carrels where construction noise is minimized.

Over the summer, as part of the first phase of the renovation, work on a new book storage area on the library's C level and the extension of an existing stairway in the northwest corner of the building were finished. Also over the summer, work progressed on reclassifying some 750,000 books to use Library of Congress call numbers, a project that is expected to be completed by the end of October.

Signage has been placed throughout the library to help patrons find services and collections. Renovation architects Shepley Bulfinch of Boston are working with design partner Frederick Fisher and Partners of Los Angeles on the project.

• High-Performance Computing Research Center: Completion of mechanical and electrical systems, site work, and administrative office areas is among the final work at the new 46,765-square-foot facility located on the Forrestal Campus in Plainsboro, according to John Ziegler, director of the Office of Real Estate Development. The building, which will house the University's high-performance computing research systems and will be staffed by three people, is expected to open Oct. 15. The two-story building will serve as home of TIGRESS -- the Terascale Infrastructure for Groundbreaking Research in Engineering and Science -- and also will support approximately half of the University's administrative computing capacity, as well as a large number of departmental systems. The facility was designed by Gensler of New York, while AKF Group of Princeton provided engineering services and CS Technology of New York provided project management services.

• Jadwin Hall: Building renovations were completed within the fourth floor this summer. Heating, ventilation and air-conditioning systems were replaced, and new lighting, building controls and windows were installed. The focus now turns to the third floor. Work on the building, which is home to the Department of Physics, began in fall 2009 and is expected to be completed in fall 2013. Staff members displaced by renovation work will be housed in temporary space at 87 Prospect Ave. and Frick Chemistry Laboratory.

• Wilcox Hall: Julian Street Library, located in Wilcox Hall in the Wilson College residential complex, was renovated over the summer and reopened in September. New furniture, carrels and lighting were installed, and the library's computing and technological resources also were upgraded. Located on the second floor of Wilcox Hall, the facility's new interior was designed by Joel Sanders Architect of New York to create a more flexible and versatile study space for students.

• Blair Walk: Excessive rain and some technical difficulties delayed renovation of the walkway along the Pyne Hall upperclass dormitory this summer. The walkway will be cleaned up and covered with temporary paving before natural bluestone is placed later this fall. Some plantings will be put in place this fall. Over the summer, maintenance and waterproofing work was completed on the nearby archway, Dodge Gate.

• Lawrence Apartments: Exterior maintenance work that started in June at the Lawrence Apartments graduate student housing complex located off Alexander Road will be completed by the end of September. The facades of building No. 1 and buildings No. 8-14 have undergone routine maintenance, which has required some scaffolding to be placed outside the structures.