The University's science neighborhood along Washington Road will continue to develop amid a series of construction projects taking place on campus this summer. As the Chemistry building and Streicker Bridge move closer to opening, work also has begun on the Neuroscience and Psychology buildings and on renovations of Jadwin Hall.

Anne St. Mauro, assistant vice president for facilities-design and construction, and Sean Joyner, deputy director of the Office of Design and Construction, provided an update on these and other summer projects:

• Chemistry building: The 265,000-square-foot facility, which will be completed this fall after three years of construction, will be the largest single academic building, excluding Firestone Library, on the University's campus. The building, located east of Washington Road between Ivy Lane and Faculty Road just south of Jadwin Hall, incorporates sustainability elements throughout the facility. The building features laboratory and teaching spaces in one wing and offices in another wing, joined by a large skylit atrium. Summer work will focus on landscaping and final preparations for a six-month move-in period beginning in the fall. Classes are scheduled to be held in the building for the first time in spring 2011.

• Streicker Bridge: After two years of construction, the 300-foot pedestrian bridge connecting the two sides of the science neighborhood is expected to open to the public in mid-July. Spanning Washington Road, the bridge will have landings on the east side near the Chemistry building and Jadwin Hall and on the west side near Icahn Laboratory and the planned Neuroscience and Psychology buildings. 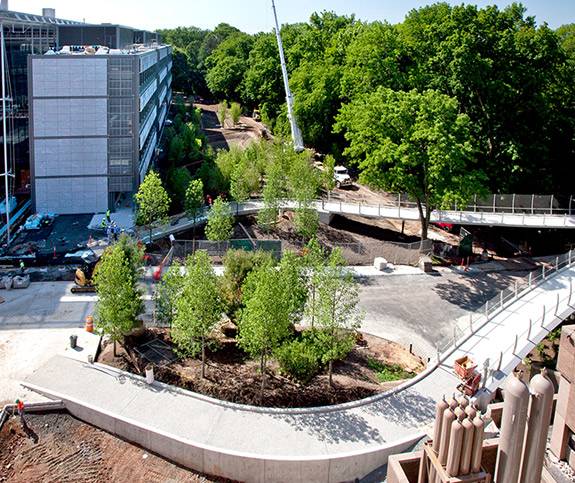 Two major elements of the University's science neighborhood along Washington Road -- the new Chemistry building (rear left) and Streicker Bridge (foreground) -- will be completed by this fall. (Photo: Denise Applewhite)

• Neuroscience and Psychology buildings: Excavation and utility work has begun and will continue throughout the summer at the site of the new Neuroscience and Psychology buildings, south of Icahn Laboratory and west of Washington Road. The two-building complex, which will encompass 248,000 gross square feet, will feature state-of-the-art research facilities, meeting rooms, faculty offices and instructional space. The facility will house the Princeton Neuroscience Institute, now located in the Thomas and Moffett laboratories, and the Department of Psychology, currently located in Green Hall. Construction is expected to be completed in 2013.

• Jadwin Hall: A series of renovations to Jadwin, home of the Department of Physics, will take place through fall 2013. Work is under way on a new rooftop mechanical room to house equipment that was moved from the basement of Jadwin to accommodate a new tunnel connecting to the Chemistry building. Work will begin this summer to replace heating, ventilating and air conditioning systems and to install new lighting, building controls and windows in Jadwin's bottom two levels. Similar work will be done in phases throughout the building over the next three years. Starting this fall, displaced members of the physics department will be housed in temporary space at 87 Prospect Ave.

• Princeton Stadium: Work this summer at the stadium, adjacent to the Chemistry building and Jadwin Hall, will include repainting its steel structure and replacement of railings, which will leave certain sections of the stadium blocked from access at various times. The surface of Weaver Track also will be replaced this summer.

• Firestone Library: Renovations will take place this summer on the library's lower A, B and C levels. Isolated areas on levels A and B will serve as temporary office space for current occupants of level C, where a new Department of Rare Books and Special Collections (RBSC) storage space will be constructed. Work on levels A and B will be completed this summer, while the RBSC area on level C will be completed by fall 2011. The existing stairway in the northwest corner of Firestone, which currently connects the lower three levels, will be extended to the third floor.

• New South: Renovations are under way at New South -- which has housed University administrative offices for 40 years -- to accommodate some academic functions of the Lewis Center for the Arts that currently reside at 185 Nassau St. The space was made available when Princeton's finance and treasury operations moved from New South to 701 Carnegie Center in fall 2009. The first floor of New South will be converted to acting, dance and warmup stations for the programs in theater and dance, which are expected to be completed by fall. The first-floor lobby also will be renovated to provide a larger and more attractive entrance to the building. By late summer, the Program in Creative Writing will occupy the sixth floor with offices, three classrooms and a library. The fifth floor will be renovated for new offices for the housing department, which will move this fall from its current space in the MacMillan building. This spring the Office of Human Resources relocated from the first floor of New South to the second and third floors, and the TigerCard Office moved from the A level to the third floor.

• Brown Hall: A new archway will be built on the south façade of the dormitory building this summer. In addition, interior renovations that include restroom, fire-alarm and heating system upgrades will be completed by the fall.