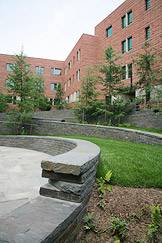 Crews are putting the final interior finishes and landscaping in place at Butler College this summer heading into the fall opening of the newly reconstructed residential college. This courtyard consists of an amphitheater and landscaping that is irrigated by a stormwater cistern. Other sustainable features include green roofs on 50 percent of the college's buildings.

The framework of the new pedestrian bridge spanning Washington Road will emerge as part of a series of summer construction projects that also includes continued progress on the new Chemistry Building and the completion of the Butler College renovation.

Anne St. Mauro, assistant vice president for facilities-design and construction, provided an update on the summer slate of projects:

Streicker Bridge -- The bridge connecting the two sides of the science neighborhood already is beginning to take shape, as crews are erecting the formwork to support the concrete arches that will make up the pedestrian walkway. By summer's end, the concrete for the arches will be poured and the slender metal pipe arch that supports the walkway -- intended to represent a gateway into the campus and the community -- will be installed. To accommodate this work, Washington Road will be closed from Faculty Road to Ivy Lane from 8 p.m. Friday to 6 a.m. Monday June 26-29, July 10-13 and July 17-20. Streicker Bridge, which spans 300 feet, is expected to be completed in fall 2010 in conjunction with the new Chemistry Building. On the west side of the bridge site, work is taking place to prepare for a tunnel connecting the Icahn Laboratory with the planned Neuroscience and Psychology Buildings, which are in the design phase. 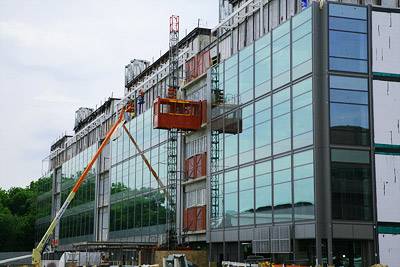 The installation of the new Chemistry Building's glass and aluminum façades will be completed this summer and will be followed by exterior finishing work. The 263,000-square-foot facility is expected to open in late fall 2010.

Butler College -- Final interior finishes and landscaping will occupy crews this summer heading into the fall opening of the newly reconstructed residential college. Green roofs have been planted on 50 percent of the college's buildings. The renovation of Butler College is the final phase of the University's transition to the four-year residential college system. Five dormitories were demolished in summer 2007 to begin converting Butler from a two-year to a four-year college housing undergraduates from all years as well as graduate students.

Wilcox and Wu halls -- Tying into the Butler College reconstruction, crews will demolish the serveries and kitchen in neighboring Wilson College's Wilcox Hall, then rebuild them to connect with Butler's Wu Hall and create a combined servery for the two colleges. Construction of a new entry to Wilcox, with a stair tower and elevator, on Goheen Walk on the building's south side will be completed this summer.

The new home of Fields Center for Equality and Cultural Understanding and Community House at 58 Prospect Ave will feature a historical restoration, a full interior renovation and a 5,000-square-foot addition.

Fields Center -- After a year of major construction, crews will complete exterior and interior finishes at the former Elm Club at 58 Prospect Ave., which will house the Fields Center for Equality and Cultural Understanding and Community House. The new tenants will move into the space in August for the beginning of the fall semester. The new site features a restoration of the former eating club to its original 1906 look, a full interior renovation and a 5,000-square-foot addition.

Campus Club -- The former eating club is expected to reopen this fall as a community space primarily for undergraduate and graduate students. Crews will complete remaining interior work over the summer. The University in 2006 acquired ownership of the 12,600-square-foot building at the corner of Washington Road and Prospect Avenue. The appearance and character of the building, which was designed in 1909, have been preserved and augmented with additions such as an elevator, accessible entries and restrooms, and a geothermal system for heating and cooling.

Art museum -- After five years on display in front of the Princeton University Art Museum, the recognizable "Big Figures" installation was taken down on June 16. The 20 large bronze sculptures, created by internationally renowned artist Magdalena Abakanowicz, were loaned to Princeton by an anonymous donor. The concrete pad on which the figures stood at the entrance to McCormick Hall will be removed, and the area will be seeded for a lawn over the summer.

Whig Hall -- The home of the venerable American Whig-Cliosophic Society will undergo replacement of its heating, ventilating and air conditioning system and interior renovations throughout the building. These renovations include accessibility improvements and enhancements to lighting, fire alarms, sprinklers and other safety features. Crews also will make repairs to the roof and building exterior.

701 Carnegie Center -- After slightly more than a year of construction, work is expected to be completed by the fall on an office building at 701 Carnegie Center that will house the University's Office of Information Technology (OIT) and Office of the Vice President for Finance and Treasurer. Work this summer will largely consist of interior finishes and moving in furniture. The new tenants are expected to move in from mid-October into early November. The facility will enable OIT to consolidate many of its operations at one location, and will allow portions of other buildings used by OIT and the treasurer's office, including New South, to be repurposed for the University's planned arts and transit neighborhood.

In addition to the treasurer and vice president for finance, offices in that organization moving to 701 Carnegie will be: asset administration; budget; controller; loans and receivables; operations support; payroll, payables and taxation; purchasing; risk management; and University financials. All OIT work groups will be moving to 701 Carnegie, including administrative information services, finance administration and planning, enterprise infrastructure services and support services. A few offices will remain on the main campus, including: the Educational Technologies Center (Lewis Library); hardware support (171 Broadmead); the Language Resource Center (East Pyne); media services (New South); the New Media Center (Lewis Library); and the Solutions Center (Frist Campus Center). In addition to offices, the building will include amenities such as training rooms, labs, flexible meeting rooms and collaboration spaces, a café with indoor and outdoor seating, and a fitness facility.

Jadwin Gymnasium -- A new station for collecting trash and recycling will be constructed in the parking lot between Jadwin Gym and DeNunzio Pool, replacing a dumpster corral that had been located on the west side of the gym.

College Road Apartments -- Five units in the 13-unit faculty-staff residence complex will reopen in July after being shut down for renovations due to damages from a January 2008 fire.

Crews have begun erecting the formwork to support the concrete arches that will make up the walkway of Streicker Bridge, which will span Washington Road and connect the two sides of the University's science neighborhood. This shot is from Icahn Laboratory looking east across the road toward the new Chemistry Building.