A light-filled atrium will connect the laboratory and office spaces of the new Chemistry Building, which is scheduled for completion in fall 2010. This facility and nearby Streicker Bridge, which is expected to open in the same time frame, will be the focus of construction activity on campus this academic year. (Photo: Denise Applewhite)

For information on other planned and approved projects, visit the Campus Plan Update website.

With the newly renovated Butler College opening this fall, a pair of major projects -- the Chemistry Building and Streicker Bridge -- will be the focus of construction activity on campus this academic year.

Anne St. Mauro, assistant vice president for facilities-design and construction, provided an update on continuing projects as well as those that were completed this summer:

Butler College -- In the final phase of the University's transition to the four-year residential college, five Butler dormitories were demolished and replaced over the course of two years with contemporary two- to four-story dormitories. Sustainability features are incorporated throughout the 113,000-square-foot complex, including green roofs on more than half of its buildings; a stormwater cistern that will collect and recycle rainwater to irrigate courtyard landscaping; an external envelope that is more energy efficient than construction codes require; and interior space that is extensively illuminated by natural light. As part of this renovation, the serveries and kitchen in neighboring Wilcox Hall in Wilson College were demolished this summer and rebuilt to connect with Wu Hall in Butler, creating a combined servery for the two colleges. The project is part of the University's efforts to transform its dining halls into more non-institutional, welcoming and distinctive eating spaces. Crews over the past two years also built a new entry to Wilcox, with a stair tower and elevator, on Goheen Walk on the building's south side.

Chemistry Building -- The glass and aluminum façades of the 263,000-square-foot building were completed this summer, while construction of the roof is now 50 percent completed. Occupants are expected to begin moving into the building in late fall 2010. Exterior work this fall will include installing the building's penthouse louvers and painting metalwork along the roofline. Much of the focus of the interior construction this summer was on piping and electrical work. Crews will spend this academic year concentrating on painting and on installing drywall, flooring and mechanical systems. Setup of self-closing, high-efficiency fume hoods in the laboratory spaces -- among the many energy-saving features of the building -- began this summer and will continue through the fall. Work also will progress on the plaza that will serve as the eastern entrance to Streicker Bridge. 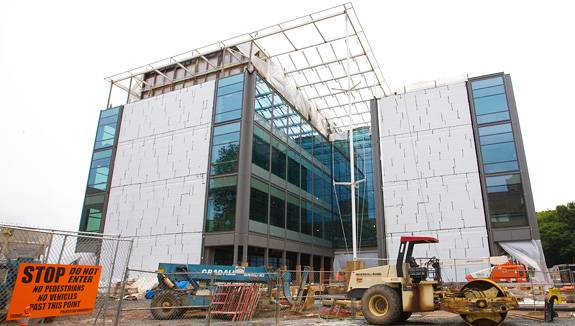 The glass and aluminum façades of the 263,000-square-foot Chemistry Building were completed this summer, while construction of the roof is now 50 percent completed. (Photo: Denise Applewhite)

Streicker Bridge -- The arches that form the walkway of the pedestrian bridge spanning Washington Road were cast in concrete over the summer and the slender metal pipe arch that supports the walkway was installed. Work will continue this year on the bridge's railings, lighting, landings and adjacent walkways as the project heads toward completion in fall 2010 along with the Chemistry Building. The 300-foot bridge will have landings on the east side near the Chemistry Building and Jadwin Hall and on the west side near Icahn Laboratory and the planned Neuroscience and Psychology Buildings, which are in the design phase.

The arches that form the walkway of the pedestrian bridge spanning Washington Road were cast in concrete over the summer. This view shows the expanse looking west toward Poe/Pardee Fields, with the Icahn Laboratory on the right and the white van below on Washington heading south. (Photo: Denise Applewhite)

58 Prospect Ave. -- The new home of the Fields Center for Equality and Cultural Understanding and Community House will open this fall after a year of major construction to renovate the former Elm Club. The 18,800-square-foot facility joins the century-old former eating club with a modern 5,000-square-foot addition to create larger and more flexible space for student programs and other groups supported by the Fields Center.

Campus Club -- The renovation of another former eating club was completed this summer, converting Campus Club to a community space primarily for undergraduate and graduate students. Campus Club, which is at the corner of Washington Road and Prospect Avenue, will hold a ribbon-cutting on its front lawn to celebrate its reopening at 4:30 p.m. Friday, Sept. 18. Tours also will be available at that event, followed by an open house from noon to 2 p.m. Saturday, Sept. 19. Renovations were made to preserve the appearance and character of the 12,600-square-foot building, which was designed in 1909, while adding an elevator, accessible entries and restrooms, and a geothermal system for heating and cooling. 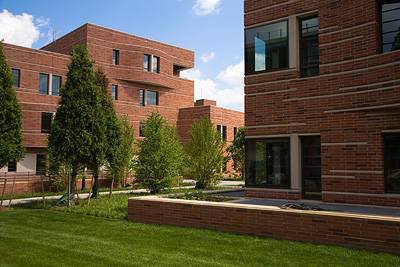 The renovated Butler College, which opens this fall, consists of five contemporary two- to four-story dormitories. Sustainability features include green roofs on more than half of the buildings, a stormwater cistern that irrigates landscaping and interior space that is extensively illuminated by natural light. (Photo: Brian Wilson)

Art museum -- After removing the "Big Figures" installation in front of the building and planting a new lawn this summer, crews at the Princeton University Art Museum began a renovation of its medieval gallery, which has been out of use. Workers have begun replacing windows and installing new flooring and lighting, among other improvements that are expected to enable the museum to display pieces from its medieval collection in the gallery by spring 2010.

Whig Hall -- Crews spent the summer completing numerous renovations in the building that houses the American Whig-Cliosophic Society student group. Work included replacement of the building's heating, ventilating and air conditioning system as well as improvements in accessibility and safety features, including lighting, fire alarms and sprinklers. In addition, the renovated Senate Chamber now offers a state-of-the-art videoconferencing system that is available for use by campus community members by contacting Whig-Clio.

701 Carnegie Center -- The Office of Information Technology (OIT) and Office of the Vice President for Finance and Treasurer are expected in November to move into a leased office building at 701 Carnegie Center after more than a year of construction. The facility will enable OIT to consolidate many of its operations at one location, and will allow portions of other buildings used by OIT and the treasurer's office, including New South, to be repurposed for the University's planned arts and transit neighborhood. 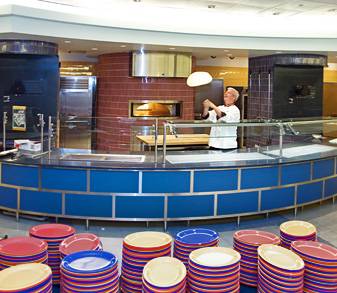 In addition to the treasurer and vice president for finance, offices in that organization moving to 701 Carnegie will be: asset administration; budget; controller; loans and receivables; operations support; payroll, payables and taxation; purchasing; risk management; and University financials. Five of the six OIT departments will be moving to 701 Carnegie: enterprise infrastructure services, administrative information services, administration and finance, project and consulting services, and a portion of support services. The sixth department, academic services, mostly will be housed at Lewis Library. This includes the Educational Technologies Center, computational science and engineering support, education and outreach services, the Broadcast Center and the New Media Center. The other offices that will remain on campus are hardware support (171 Broadmead), software support (228 Alexander St.), the Humanities Resource Center (East Pyne), media services (New South), the Solutions Center (Frist Campus Center) and the data centers at 87 Prospect Ave. and New South.

In addition to offices, the building will include computer training rooms, flexible meeting and collaboration spaces, a café with indoor and outdoor seating, and a fitness facility. OIT will conduct training classes at 701 Carnegie beginning in mid-November. University Services will manage operations at 701 Carnegie as well as public events in the space. Restaurant Associates will operate the 701 Café.