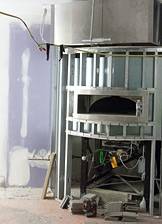 Numerous construction projects are underway at Princeton University, from cutting-edge laboratories to renovations of historic structures. Above, Forbes College, one of Princeton's six residential colleges, is getting a new pizza oven in its servery along with some renovated living and common areas.

The Princeton University campus is undergoing transformative changes this year with numerous construction, renovation and maintenance projects, including the beginning of the Arts and Transit Project and the completion this fall of the neuroscience and psychology complex.

The projects reflect the University's 10-year Campus Plan and its investment in historic buildings and park-like grounds.

Princeton Neuroscience Institute and Peretsman-Scully Hall: Construction of the 248,000-square-foot neuroscience and psychology complex is in its final stages, as the two buildings are to be completed this fall and move-in is scheduled to begin in December. Exterior work was completed over the last year, and landscaping was completed this summer. Interior work — ranging from electrical, mechanical and plumbing work to lab layouts and furniture installation — is ongoing, primarily in the neuroscience building. Designed by José Rafael Moneo Vallés Arquitecto of Madrid, the complex offers a number of shared spaces and sustainability features such as a two-part, energy-efficient outer façade of a ribbed sunscreen made of artisanal Spanish glass and an inner weather barrier of high-performance glass.

The exterior of the Princeton Neuroscience Institute and Peretsman-Scully Hall, which will house neuroscience and psychology facilities, is complete, with move-in scheduled for December. (Photo by Denise Applewhite)

Arts and Transit Project: Construction on the 22-acre site for the Arts and Transit Project began this spring with the demolition of University-owned buildings along Alexander Street. Over the summer, construction crews have completed utility work and construction of a new commuter parking lot and a temporary Dinky train platform, which will open Aug. 26. Over the next year, a roundabout will be constructed at the intersection of Alexander Street and University Place; a new permanent train station, Wawa and transit plaza will be opened, along with a new access road from Alexander Street to the West Garage. After the transit and infrastructure improvements are completed, work will begin on three buildings for the Lewis Center for the Arts and Department of Music, designed by Stephen Holl Architects; they are scheduled to open in fall 2017. 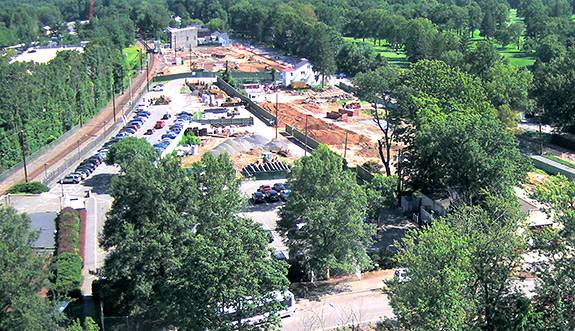 Construction on the Arts and Transit Project began this spring with the utility work and the demolition of buildings on Alexander Street and continues this fall with the development of a new transit plaza. (Photo by Christopher Lillja)

Andlinger Center for Energy and the Environment: The tops of the concrete towers of the Andlinger Center for Energy and the Environment are beginning to emerge over the construction fencing at Olden Street and Prospect Avenue. Over the past year, much of the work on the complex has been below street level; site utilities, footings and foundations have been completed, and waterproofing and framing is underway. Work on the brick and masonry façade will soon begin and is scheduled to be completed by next summer, with the building to be completed by fall 2015. The 129,000-square foot complex was designed by Tod Williams Billie Tsien Architects of New York. 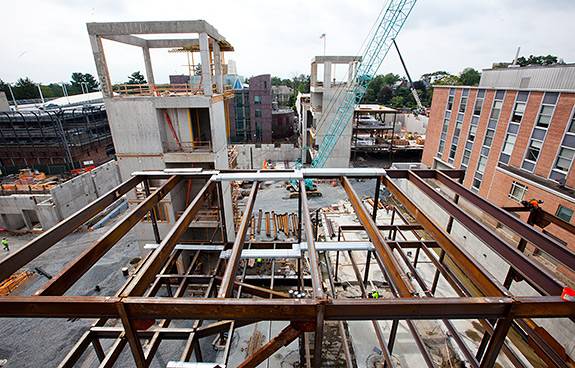 Framing for the main structure and towers of the Andlinger Center for Energy and the Environment rises from the construction site below street level on Prospect Avenue. (Photo by Denise Applewhite)

Lakeside Graduate Housing: Along Faculty Road, work is underway on the foundations for the Lakeside Graduate Housing buildings, which will house up to 715 residents in 329 units. The Hibben and Magie apartments were demolished over the past year to make way for apartments, townhomes, common areas and a parking garage. Work is being staggered on the numerous buildings on the site, and the parking garage will be the first completed structure. As foundations are completed, framing and exterior work will begin on the buildings, which are due to be completed in summer 2014. The project team includes the architectural firm Studio Ma of Phoenix and Princeton, and developer American Campus Communities of Austin, Texas. 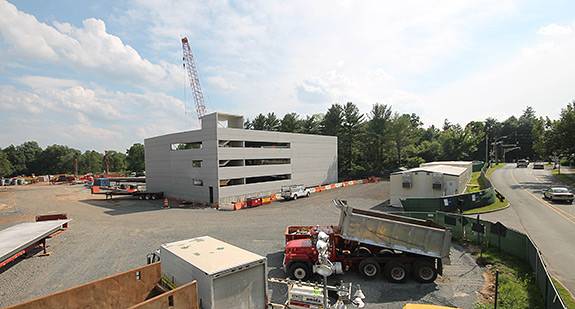 A new parking garage emerges from the Lakeside Graduate Housing site, formerly home to the Hibben and Magie apartments. (Photo by Christopher Lillja)

Stanworth Commons (Merwick-Stanworth sites): Foundation and infrastructure work began this spring on the first phase of the redevelopment of the Merwick and Stanworth sites along Route 206/Bayard Lane. The project will result in townhomes and apartments primarily for faculty and staff, with some affordable units for local residents. In the first phase to be completed by summer 2014, 11 buildings consisting of 128 units will be constructed on the previous site of the Merwick Care Center. The second phase of construction, on the Stanworth Apartments portion of the site, will begin in summer 2014 and result in 198 additional units. American Campus Communities of Austin, Texas, is developing the project, and design services are being provided by Torti Gallas and Partners of Maryland.

Olden House: An 11,779-square-foot apartment building for visiting faculty, Olden House will be completed near the end of the fall semester. The exterior walls are up, roofing is complete, and once doors and windows are added to weatherproof the space, interior finishing will begin on the building's 18 units. J. Robert Hillier of Princeton is the architect and developer of the property at the corner of Olden and Williams Streets. 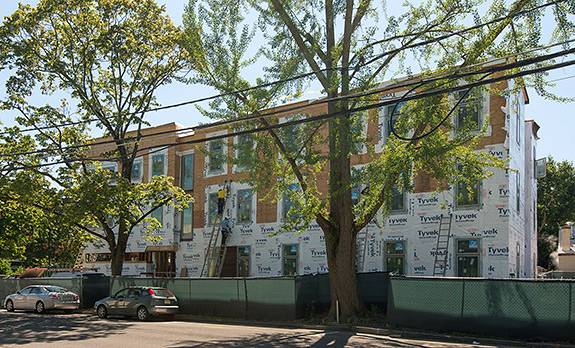 Olden House, which is made up of 18 apartment units, is intended to serve as a home for visiting faculty. (Photo by Denise Applewhite)

Bedford Field: Last summer the field hockey team's playing field was converted from grass to artificial turf, and this summer the University is installing new field lighting, building a grandstand, and constructing a team room building and restrooms for the field hockey team and lacrosse teams. The lacrosse teams use the adjacent Class of 1952 Stadium, and concourse area construction between the two grandstands will tie the facilities together. The field will be available for use at the start of the fall semester, though work on the team building will continue until the middle or end of the semester.

Firestone Library: The second phase of the comprehensive, 10-year renovation of Firestone Library continued over the last year. New cooling and heating infrastructure upgrades are in place, and additional stack areas and reading spaces were finished on A Floor. Summer work included completion of the new circulation desk on the first floor for use by the fall semester, and lower floor spaces were cleared and readied for use as temporary swing space in preparation for the upcoming third phase. Summer work also included window replacements as part of ongoing major maintenance work, with new windows in place on the entry façade and tower. Extensive reconfiguration of the second and third floors will continue through the winter, including construction of a signature reading room on the third floor. The executive architect for the project is Shepley Bulfinch Richardson and Abbott, and the design architect is Frederick Fisher and Partners Architects. 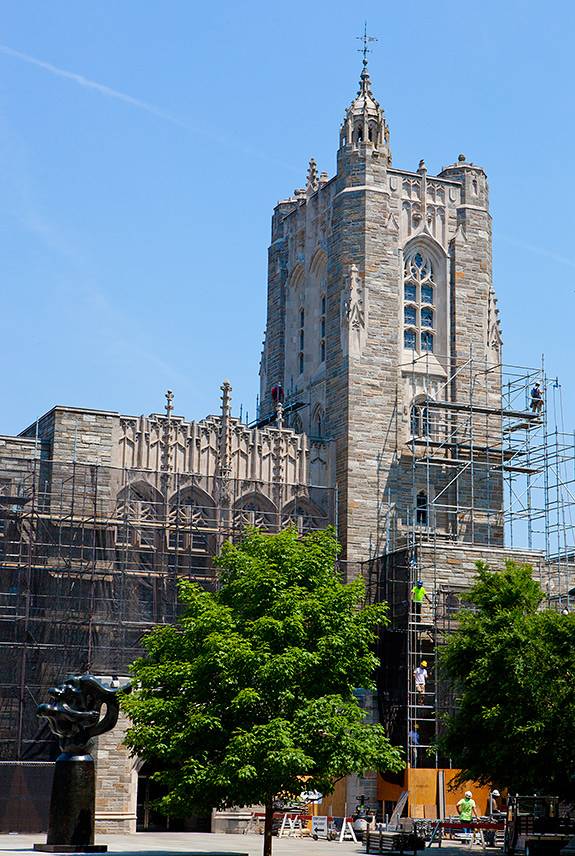 As work progresses inside as part of Firestone Library's 10-year renovation plan, regular maintenance continues as windows are being replaced on the tower and entry façade. (Photo by Denise Applewhite)

Forbes College: The seminar room for Forbes College, one of Princeton's six residential colleges, has been relocated from 99 Alexander St. to the main building. In addition, the servery has had a small renovation, which primarily involved the addition of a pizza oven; the café has received new finishes; and a new lounge area replaced the area of the former mailboxes. One resident graduate student, seven undergraduate rooms and a common room will now be housed at 99 Alexander St.

Maclean House: In June, Maclean House was vacated and workers began to prepare for interior and exterior renovations to the 10,000-square-foot structure, which was built in 1756. The next phase will be demolition of old piping and mechanical systems; interior walls, floors and ceilings; and the exterior brick chimneys and slate roof. Along with re-finishing the space, new elements will include installation of fire department standpipe connections and emergency power, and new designs will incorporate the re-use of a number of historic elements. The building, which is home to the Alumni Association, is scheduled for completion in spring 2014.

4 Mercer St.: Construction began this spring to convert this historic property, built in 1878 and formerly home of the Town Topics newspaper, into three faculty housing units on the upper floors and University administrative space on the ground floor. The building's brick exterior is being restored, and the 8,200-square-foot interior will feature new utility systems and finishes. Where an addition was removed from the back of the building, a stairway is being added. Work began in March and is due to be completed in September. The project team includes HMR Architects of Princeton. 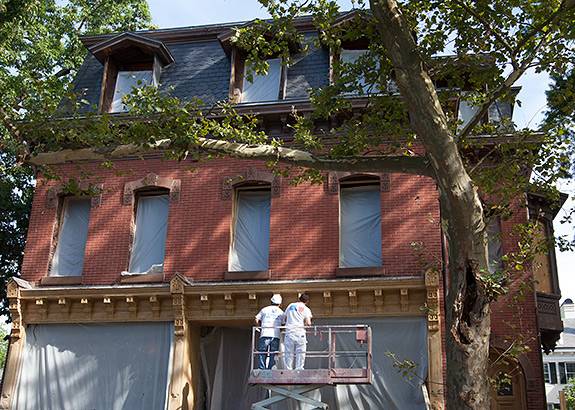 The structure at 4 Mercer St., built in 1878, is being restored and renovated for University administrative use and faculty housing units. (Photo by Denise Applewhite)

Guyot Hall: The Department of Geosciences gained a new laboratory this spring with the opening of the Princeton Grinder Lab, which houses the Grinding, Image and Reconstruction Instrument (GIRI). The instrument allows researchers to automate the sampling and imaging of materials such as stone, and then create 3-D models of items that may have been embedded in an object, such as animal fossils. The 800-square-foot lab is located to the south of the main building.

Eno Hall: Research laboratories are being renovated in the basement of Eno Hall, which houses some of the Department of Ecology and Evolutionary Biology, and the building was vacated in preparation for the renovation work. Summer construction included a new emergency power feed, fire water supply piping, sanitary piping upgrades, the installation of an elevator and utility shaft, a revised ADA compliant entrance, ADA compliant restrooms on the first floor, as well as fire code and common area finish upgrades on both the first and second floors. Re-occupancy of the first and second floors is targeted for fall 2013, while the work associated with the basement research laboratory and associated support spaces will continue into early 2014.

Hoyt Laboratory: Hoyt Laboratory, a 34,000-square-foot facility that serves the Department of Chemical and Biological Engineering, had its utility and laboratory systems upgraded and reopened in early spring. Additional work scheduled for this summer and fall will see the creation of a new loading dock on the east side of the facility adjacent to Lot 10. This loading dock will replace the existing one at 20 Washington Road and will contain nitrogen filling and emergency generator capabilities. The dock will be completed in early fall and the emergency generator will be placed during the winter of 2013-14. 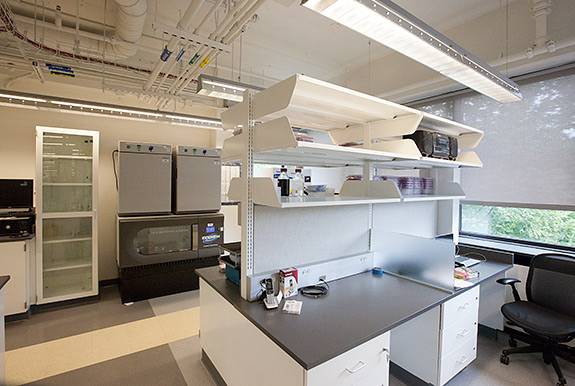 After renovations in the past year, laboratory systems at Hoyt Laboratory are upgraded for use by the Department of Chemical and Biological Engineering. (Photo by Denise Applewhite)

Jadwin Hall: The phased construction of Jadwin Hall continued this summer, and the main building renovations to windows and heating, ventilation, air conditioning, lighting, sprinkler and alarm systems are complete. The fire alarm and sprinkler work in the high bay area is scheduled to begin in the fall and end in spring 2014. Additional lab renovations in the high bay are being planned in coordination with researchers.

120 Prospect Ave.: This 39-unit apartment building for faculty and staff has been renovated over the past year with new utility systems; compliance with the Americans with Disabilities Act; complete kitchen and bathroom renovations; and upgrades to the façade and storage and laundry facilities in the basement.