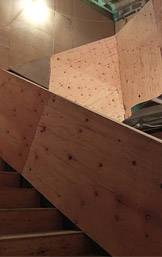 Following a summer buzzing with activity, construction and renovation projects around the Princeton University campus will continue this fall. In Firestone Library, improvements to the main staircase are among work scheduled for the second phase of the library's 10-year renovation. While the library will remain open throughout the project, the staircase will be temporarily closed until January 2013.

The start of the academic year marks milestones for campus construction projects, including the final phase of Princeton University's solar collector field, which will produce solar power to support the University's annual electrical needs.

Following a summer buzzing with activity, progress on new buildings and renovated facilities will continue this fall. Among the next steps for ongoing projects: Interior work will begin at the Neuroscience and Psychology buildings; the foundation will be laid for the Andlinger Center for Energy and the Environment; and demolition will commence to make way for the new Lakeside graduate community.

Updates on the following projects were provided by the Facilities Organization units, including the Department of Campus Energy and Utilities, Grounds and Building Maintenance, the Office of Design and Construction, and the Office of Real Estate Development, which oversee different projects within the University's 10-year Campus Plan.

Solar collector field: Installation of the solar collector field, comprising 16,500 photovoltaic panels, is nearly complete. The 5.3-megawatt system is now being tested in phases and an official opening celebration is scheduled for October. Located on 27 acres in West Windsor adjacent to Princeton's main campus, the collector field will be connected to the University's main campus electric power distribution system, and is anticipated to meet between 6 and 8 percent of the University's annual electrical needs when fully operational. New landscaping on the site will screen the panels from nearby Washington Road, Lake Carnegie and the Delaware and Raritan Canal towpath.

The University worked with SunPower Corp., a global solar technology company with East Coast offices in Trenton, N.J., to design and build the system. Key Equipment Finance, based in Superior, Colo., will fund and own the system, and will lease it to Princeton. 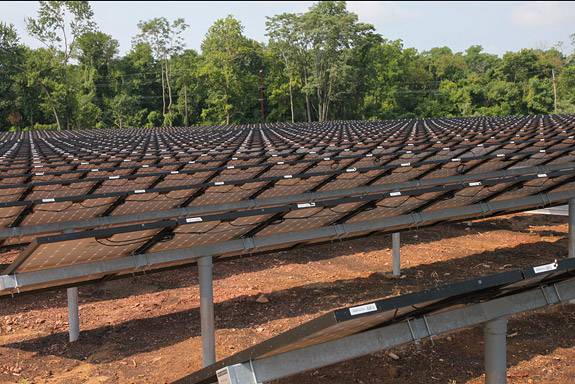 Installation of the University's solar collector field, comprising 16,500 photovoltaic panels across 27 acres in West Windsor, is scheduled to finish this fall. The system will produce solar power to support the University's annual electrical needs.

Neuroscience and Psychology buildings: Exterior work on the 248,000-square-foot, two-building project designed by José Rafael Moneo Vallés Arquitecto of Madrid is expected to finish early this fall. The state-of-the-art complex features energy-efficient outer walls composed of two "skins" of artisan glass with a three-foot-wide space for air circulation inserted between them. Construction will continue on the interior of the building through this fall, including electrical, mechanical and plumbing work. The new home of the Princeton Neuroscience Institute and the Department of Psychology, located south of Icahn Laboratory along Washington Road, is expected to open in fall 2013. 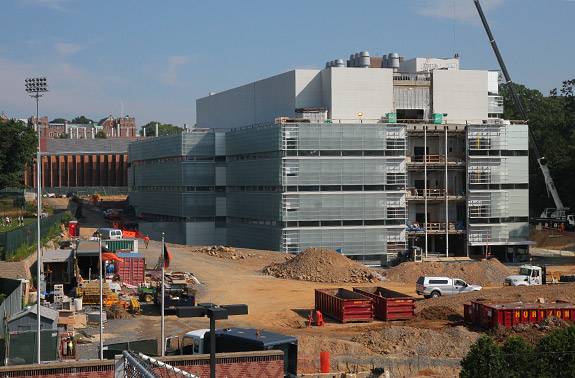 Exterior work on the Neuroscience and Psychology buildings should finish early this fall and the 248,000-square-foot complex is scheduled to open in fall 2013.

Andlinger Center for Energy and the Environment: This summer marked the completion of excavation of the site, a process that involved grinding — rather than blasting — bedrock in order to reduce disruptions for occupants in nearby buildings. The three-story facility, which will be home to the Andlinger Center for Energy and the Environment, will extend one story below grade and include specialized engineering laboratories, offices, support spaces and a lecture hall. Concrete operations to lay the foundation are underway, and erection of the building's steel frame is expected to start this winter. The 129,000-square-foot structure, to be located at the corner of Olden and Prospect streets, has been designed by Tod Williams Billie Tsien Architects of New York. 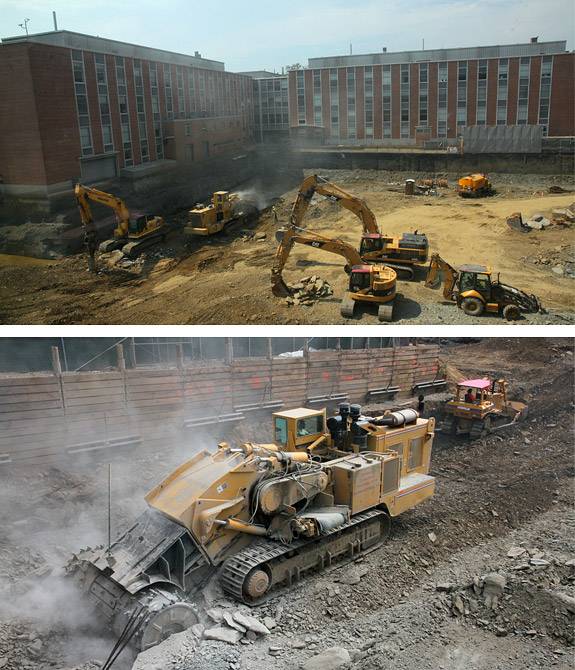 Trenchers and road miners were used this summer to grind away bedrock at the location for the new home of the Andlinger Center for Energy and the Environment. The excavation equipment was shipped from Texas in pieces and assembled on site. The next step for construction of the 127,000-square-foot structure is to lay the foundation.

Washington Road stream: The restoration of the Washington Road stream, which flows into Lake Carnegie near Faculty Road, was completed this summer. The project aims to reduce erosion and other damage to ecosystems in the area, as well as improve the water quality of the stream and lake. The reconfiguration was engineered by Vanasse Hangen Brustlin of Watertown, Mass., and involved: widening the stream; reducing its existing slope through the use of step pools; reconfiguring the flood plain; and placing approximately 300 new trees and 2,000 plantings around the Washington Road valley. The University will spend the next five years monitoring the success of improvements to the landscape and waterways. 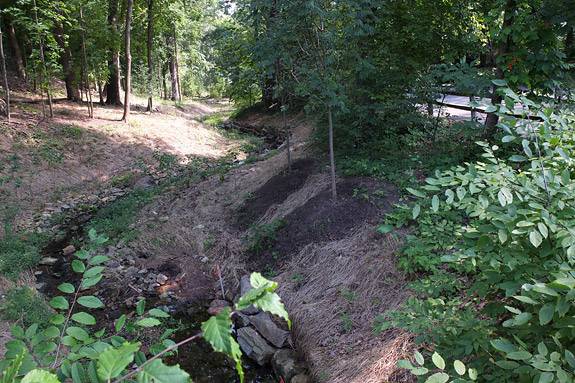 The restoration of Washington Road stream, shown here earlier this summer, aims to reduce erosion and other damage to ecosystems in the area, as well as improve the water quality of the stream and Lake Carnegie.

Firestone Library: A reconfigured lobby greeted students and faculty returning to the University as part of the second phase of the comprehensive, 10-year renovation of Firestone Library. Many of the changes, such as the temporarily relocated security desk and temporarily relocated circulation and reserve service counter, are interim steps toward creating a more open lobby and adding reader spaces on the first floor. The building's main staircase will remain closed until January 2013 for permanent improvements to the stairs, including a new skylight installation. Work also will continue in a large area of the A floor to upgrade mechanical systems, and improve much of the collection and study spaces. The library will remain open and occupied throughout the long-term project designed by Shepley Bulfinch architects of Boston with Frederick Fisher Partners of Los Angeles.

Bedford Field: Bedford Field recently opened as the new home of the Princeton field hockey team, following work this summer to convert the ground from grass to artificial turf. Drainage improvements also were completed as part of the project's first phase. The final phase will begin in spring 2013 and will include a grandstand, field lighting, press box modifications and a new building, designed by Marble Fairbanks of New York, with team rooms and bathrooms. The press box and outbuilding will be shared with the men's and women's lacrosse teams, which use the adjacent Class of 1952 Stadium. 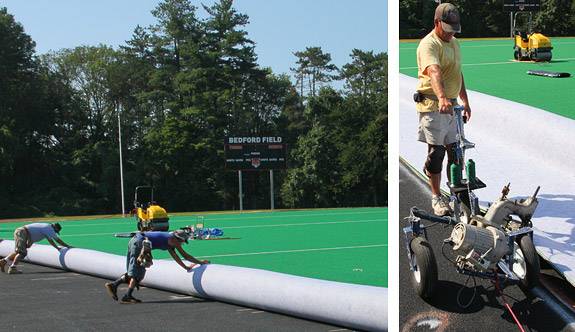 Workers from Play Safe Turf & Track of Ithaca, N.Y., installed artificial turf at Bedford Field earlier this summer. The process involved sewing the turf to the ground in the sections.

Jadwin Hall: The four-year phased renovation of Jadwin Hall, which houses the Department of Physics, continues this academic year with work focused on the 2nd floor and B level. By the time the project is completed in fall 2013, the entire building will be outfitted with new energy-efficient heating, ventilation and air-conditioning systems, energy-efficient lighting and building controls, new windows, and upgraded sprinkler and fire alarm systems. Offices, laboratories, classrooms and lobby spaces also have been refreshed and updated as part of the project. 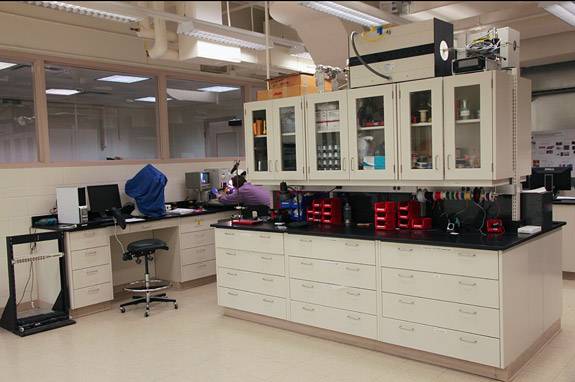 Department of Physics laboratories have been refreshed with new flooring, lighting and other mechanical systems, as part of Jadwin Hall's four-year phased renovation.

Hoyt Laboratory: The ongoing renewal of Hoyt Lab will provide new mechanical, electrical and laboratory systems throughout the 34,000-square foot structure, which is intended to extend the building's life and make it more efficient. Interior renovations will continue this fall to create specialized laboratory and administrative spaces to accommodate biological engineering research affiliated with the School of Engineering and Applied Science. Hoyt Lab has been offline since the chemistry department moved to the new Frick Chemistry Laboratory in fall 2010.

West College waterproofing: Waterproofing the West College basement was one of many University maintenance projects completed this summer, though working without damaging the historic structure's ivy presented a unique challenge. The project required digging a hole around the administrative building, near the ivy's base, to seal the exterior below grade. Grounds and Building Maintenance staff preserved the plantings by digging up the roots, wrapping them in burlap and placing them in wooden boxes anchored to the building. As the waterproofing was finished in sections, the ivy was replanted. 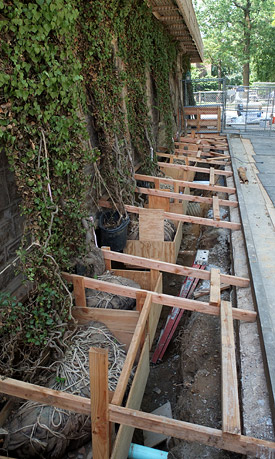 The ivy growing along West College was carefully preserved during work this summer to waterproof the historic structure's basement.

Lakeside: The former Hibben and Magie apartments will be demolished this fall to make way for the new Lakeside graduate student community, which will house up to 715 residents in 329 units. Preparations for construction of a parking garage and the facility's geothermal heating and cooling system will happen at the same time. The project, which is expected to finish in summer 2014, will expand housing capacity at the site located south of Faculty Road and east of Alexander Street along Lake Carnegie. The project team includes the architectural firm Studio Ma of Phoenix and Princeton, and developer American Campus Communities of Austin, Texas.

Merwick and Stanworth faculty and staff housing: The University will seek final site plan approval from the Princeton Regional Planning Board this fall for the proposed community of townhomes and apartments along Route 206/Bayard Lane. Phase one of the project is expected to be completed in summer 2014 with the construction of 128 units at the Merwick site. The second stage of work at Stanworth is scheduled to follow with the redevelopment of 198 units and is expected to be completed in summer 2016. Design architect Torti Gallas and Partners of Maryland is developing the project on behalf of the University.

Olden House: Olden House, developed by local architect and developer J. Robert Hillier of Princeton, will provide 18 apartments for visiting faculty members. Following demolition this summer of two unoccupied townhomes owned by the University, construction is expected to begin this month on the 11,779-square-foot building at the corner of Olden and Williams streets. It is scheduled to open in summer 2013.