Following the completion of the Frick Chemistry Laboratory and Streicker Bridge, campus construction activity during this academic year will focus on a replacement of the Lenz Tennis Center and work on several ongoing projects.

Anne St. Mauro, assistant vice president for facilities-design and construction, and Sean Joyner, deputy director of the Office of Design and Construction, provided an update on current projects:

• Lenz Tennis Center: The facility accompanying the courts used for varsity tennis matches was demolished this summer to make way for a new complex. The new 7,110-square-foot center will include a building with locker rooms for the men's and women's varsity teams, coaches' offices, a large meeting space and storage areas, and a 3,700-square-foot viewing deck. The previous facility, which opened in 1983, totaled 1,500 square feet. Work on the new center will not affect the playing courts and should be completed by the end of the academic year. The facility was designed by Dattner Architects of New York City. 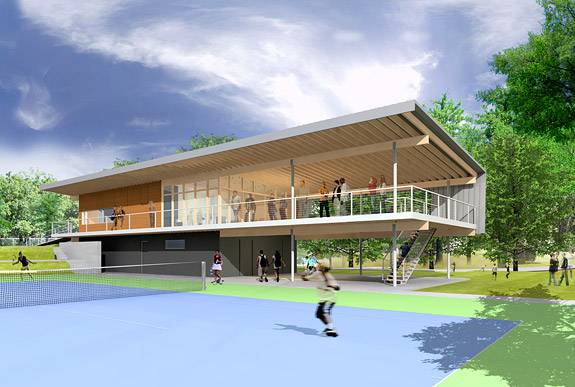 The Lenz Tennis Center will include a building with locker rooms for the men’s and women's varsity teams, coaches' offices, a large meeting space and storage areas, as well as a 3,700-square-foot viewing deck. (Image courtesy of Dattner Architects)

• Jadwin Hall: Renovations began in the fall of 2009  at Jadwin, home of the Department of Physics, and will continue through fall 2013. Work this fall will focus on replacing heating, ventilating and air conditioning systems and installing new lighting, building controls and windows in Jadwin's A level. Displaced members of the physics department will be housed in temporary space at 87 Prospect Ave.

• Firestone Library: As planning continues for a complete renovation of Firestone, two ongoing projects are expected to be completed by fall 2011: A new book storage area is being created  on the library's C level, and the existing stairway in the northwest corner of Firestone -- which currently connects the lower three levels -- will be extended to the third floor. An open house to discuss renovation plans with the campus community is being planned for later this fall.

• Washington Road stream: An ecological restoration of the stream, which flows into Lake Carnegie, will involve widening the stream, reducing its existing slope through the use of step pools, reconfiguring the flood plain and placing plantings around the Washington Road valley. The work, which will take place this fall, is aimed at decreasing the velocity of the stream to stop erosion and eliminate the constant deposits of sediment into Lake Carnegie, improving water quality of the stream and lake.

Renovations to A level at Dillon Gym completed