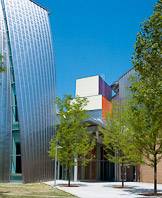 Bright colors and bold shapes mark the distinctive design of the Lewis Library, which is one of three new facilities that will be completed this summer and open in the fall. The finishing touches will be put on the Lewis Library, a new engineering building and Roberts Stadium this summer, in addition to a host of other construction projects across campus. Photos: Brian Wilson

Crews will work this summer to put the finishing touches on three additions to the Princeton campus -- the Lewis Library, a new building bridging engineering and the social sciences, and Roberts Stadium -- while progressing on several other construction projects.

Here is a rundown of these three new facilities, as well as other construction work planned for this summer, provided by Anne St. Mauro, director of the Office of Design and Construction:

• Lewis Library -- With the completion of construction this spring, summer work will focus on moving furniture and offices into the Lewis Library, which will be fully operational by fall. The distinctive, 87,000-square-foot structure -- marked by architect Frank Gehry's bold, curved stainless steel roofline -- is located on the corner of Washington Road and Ivy Lane. It will house several science and math library collections, the map collection and the digital map and geospatial information center, in addition to the Office of Information Technology's Education Technologies Center, New Media Center, Broadcast Center and computational science and engineering support group, and the Princeton Institute for Computational Science and Engineering. Construction on the Lewis Library began in late 2004.

The Department of Operations Research and Financial Engineering and the Center for Information Technology Policy will be housed in the new glass-faced building located between Mudd Library and Wallace Hall.

• Engineering building -- Interior finishing and landscaping work will be completed in August in time for the opening of the new glass-faced building, after more than a year of construction. Located between Mudd Library and Wallace Hall, it will house the Department of Operations Research and Financial Engineering and the Center for Information Technology Policy, which brings together engineers and social scientists to address issues arising from advances in computer technology. The 46,000-square-foot, four-story building includes office and research space for faculty and graduate students as well as two classrooms. As part of sustainability efforts, it will have a "green roof." 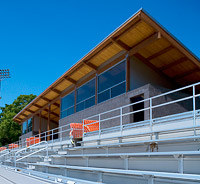 • Roberts Stadium -- Crews will spend the summer finishing the playing field and the landscaping at the new state-of-the-art soccer stadium that will open this fall. The facility, located on the south end of campus west of Washington Road, will feature a three-sided stadium, a playing field with a natural grass surface and an adjacent practice field with an artificial surface. Three free-standing pavilions will house a ticket office, press box, concession stand, team rooms, restrooms and other facilities. Work began last year on the stadium, which will have a 3,000-person capacity and lighting for night games.

• Butler College -- In the final phase of Princeton's conversion to the four-year residential college system, the University is replacing five Butler dormitories that were demolished last summer. Following excavation and foundation work conducted during this academic year, crews will spend the summer finishing the buildings' brick exterior and beginning interior mechanical, electrical and plumbing work. The project includes a strong focus on sustainability, including "green roofs" on more than half of the dorms, which will be planted in the fall. Butler will reopen in fall 2009, housing undergraduates from all four years as well as graduate students.

Crews working on the Butler College renovation will spend this summer finishing the buildings' brick exterior and beginning interior work.

• Wilcox Hall -- Crews will begin construction of a new entry to Wilcox, with a stair tower and elevator, on Goheen Walk on the building's south side. This project is expected to continue into the fall semester. In addition, mechanical, electrical and plumbing systems will be replaced in Wilcox over the summer. Next summer, work will begin on both Wilcox and Wu halls to merge the kitchens and serveries for Wilson and Butler colleges. The Wilson dining room in Wilcox also will be renovated beginning next summer. 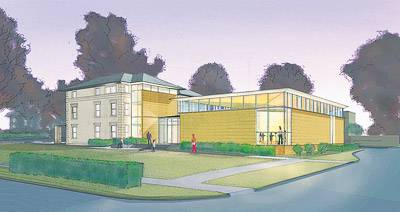 This view from Olden Street of the future home of the Fields Center at 58 Prospect Ave. shows the renovated main building at left with its original Italianate Revival-style architecture and the 5,000-square-foot addition at right. (Rendering: Courtesy of Ann Beha Architects)

• Fields Center -- The target date for completion of the center's new home at 58 Prospect Ave. is July 2009. Plans include a full renovation of the interior and construction of an addition on the north side.

• Campus Club -- Renovations this summer will prepare the former eating club for its reopening this fall as a community space primarily for undergraduate and graduate students. The University in 2006 acquired ownership of the facility at the corner of Washington Road and Prospect Avenue and agreed to preserve the appearance and character of the 12,600-square-foot building -- particularly its exterior and principal public spaces within the building. Additions include an elevator, accessible entries on the lower level into the tap room and on the first floor into the living room, accessible restrooms on the basement and second level and a more sustainable geothermal system for heating and cooling.

• Frist Campus Center -- Café Vivian will be closed this summer for renovations to reorganize its layout and seating. The venue will reopen in the fall with an expanded, healthier menu.

• Art museum -- Crews will replace the roof and skylights on one wing of the building, in addition to repairing exterior stucco, installing windows and adding insulation throughout the museum. The work is expected to be completed by fall.

• Peyton Hall -- With the astrophysics library moving into Lewis Library, crews will renovate the former library space in Peyton Hall this summer to create two floors with 10 new offices. On the east side of the building, the larger domed telescope room on the second floor will be converted into a conference space -- with the out-of-use telescope hanging from a new skylight. The smaller telescope room, which hosts public observations, will be closed during the renovations this summer but will reopen when the work is completed this fall.

• Chemistry building -- Work on the building's concrete foundations and basement walls will be completed over the summer. The installation of steel framing will begin over the summer and continue into the fall. The building, on the former Armory site on Washington Road, is due to open in fall 2010.

• Neuroscience and psychology buildings and Streicker Bridge -- Work will take place this summer on the eastern side of Poe Field to install utility lines for the new neuroscience and psychology buildings south of the Icahn Laboratory and Streicker Bridge that will span Washington Road. Some early foundation work on the pedestrian bridge also may begin this summer.

• 36 University Place -- The Princeton University Store is renovating the first floor of its longtime location to offer dorm supplies, convenience and prepared foods, stationery and educational learning supplies, small electronics, and health and beauty products. The Princeton Pharmacy and Pequod Printing also will continue to operate at this location. (The store has moved its insignia and apparel operations to Nassau Street and discontinued its textbook services.) After renovations of the first floor are completed this summer, the University will begin renovations of the second and third floors to accommodate four new occupants -- Career Services, the Study Abroad Program, Health Professions Advising and the Community Based Learning Initiative -- who are expected to move in during fall break in October.

• Dining Services -- The Department of Dining Services will move this fall from its current locations at 106 and 130 Alexander St. to the former Springdale Golf Club clubhouse on College Road east of the Graduate College. Crews will work this summer to seal the building and renovate the interior for new office space.

• Helm Building -- Renovations will be conducted on the building at 330 Alexander St. this summer to add three offices in the Office of Development.

• Parking lot 23A -- An expansion of the parking lot south of Faculty Road and just east of Alexander Street will provide 60 additional spaces and should be completed by fall.

• Guard booth -- The Department of Public Safety guard booth currently located between Whitman and Butler colleges on Elm Drive will be moved south on the road, near the MacMillan Building.