Princeton University has selected American Campus Communities (ACC) to assist with preparations associated with the redevelopment of the Hibben-Magie site for graduate student housing.

The Austin, Texas-based company is one of the largest developers of student housing communities in the country. The company will work with the University on predevelopment tasks such as conducting focus groups with graduate students and other stakeholders, obtaining regulatory approvals, evaluating design and financing alternatives, estimating costs, and scheduling services. A project design with all regulatory approvals is expected to emerge from this collaboration.

"After a great deal of research, including visits to a number of locations where ACC and others have developed similar complexes, we learned that there are several firms that produce very high-quality products and services," said Michael McKay, vice president for facilities, who directed a team of Princeton administrators through the search for a firm for the project. "ACC is clearly a leader in this field, and they impressed the selection team with both projects and operations that respond to the particular housing needs of graduate students. We're very much looking forward to partnering with them to meet the institution's goals for this site."

The University, with ACC, also has chosen an architect for the project, and negotiations are under way with that firm. The selection process included a request for qualifications from and interviews with a short list of architects. A member of the Graduate Student Government was an interviewer and was critical to the overall decision-making. 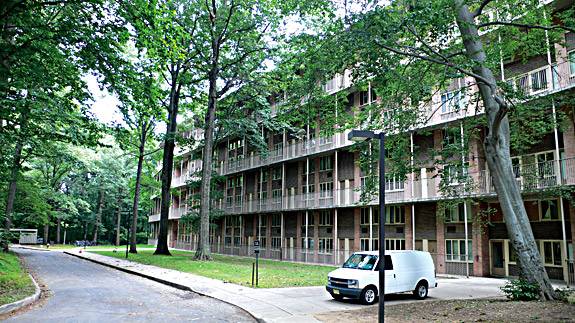 American Campus Communities will collaborate with Princeton on the redevelopment of the Hibben-Magie Apartments site to house graduate students. (Photo by Princeton University Office of Communications)

The Hibben and Magie apartments are two adjacent mid-rise buildings located south of Faculty Road and east of Alexander Street occupied during the 2009-10 academic year by 280 graduate students and 54 faculty and staff. Constructed in the 1960s, the 192 units have outmoded building systems and interior layouts, and do not offer residents amenities found in more contemporary housing facilities. Part of ACC's work will be determining the size and mix of units (studio, one-bedroom, two-bedroom or three-bedroom) and whether or not to retain all or part of the existing Hibben-Magie buildings as part of the design.

Members of the selection committee were particularly impressed with ACC's collaborative approach, as well as the standard of development and operations of student housing developments that ACC developed, owns or manages at the University of California-Irvine and Arizona State University, according to Chad Klaus, assistant vice president for facilities.

"It's an honor for American Campus to be selected by one of the world's most prestigious institutions of higher learning to address its graduate student housing needs," said Bill Bayless, American Campus CEO. "We look forward to collaborating with all University stakeholders, and are committed to providing a customized housing solution that meets the objectives and high standards of Princeton. We expect the Hibben-Magie project to set a new standard in graduate student housing."

Princeton's goal is to continue to house approximately 70 percent of its graduate students in University-owned and -operated housing. Graduate students, which number slightly more than 2,225, also live in the Graduate College and Lawrence Apartments, as well as in off-campus housing.