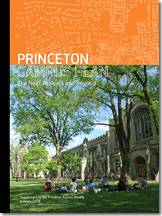 A downloadable version (in PDF format) of the 24-page brochure providing a synopsis of the plan is available on the Campus Plan website.

Members of the University community now can get a look at highlights of the final version of the Campus Plan. The comprehensive strategy to guide development through 2016 and beyond was produced over the last two years following thorough analysis of the 380-acre campus by a team of experts and significant involvement by stakeholders.

A 24-page brochure providing a synopsis of the plan is posted on the Campus Plan website in PDF format. It also is being mailed to alumni with the Jan. 23 issue of the Princeton Alumni Weekly and provided to local officials and other community leaders. The full plan is scheduled to be unveiled next month in a 180-page book.

"Out of the five master planning endeavors I have engaged in, the Campus Plan for Princeton has been the most complex," said Mark Burstein, executive vice president. "We not only decided to approach all issues in a comprehensive manner, attempting to integrate planned development with landscaping, sustainability and infrastructure objectives, but we also were forming concepts that were immediately implemented on campus."

This is not the first time many members of the University community will have seen the planning recommendations. As the Campus Plan was developing, organizers provided many opportunities for involvement and updates. In November 2006, a "Plans in Progress" event at Chancellor Green drew 900 people from the campus and community.

Key recommendations of the 10-year plan include:

• The creation of an arts and transit neighborhood that more fully integrates campus and community. This project is designed to support a significant expansion of the University's commitment to the arts, helping to achieve the goals of the creative and performing arts initiative announced by President Shirley M. Tilghman in January 2006. The area near the intersection of Alexander Street and University Place also would serve as a new gateway, with public plazas, cultural and retail spaces (including a relocated Wawa store), and reconfigured roads and transportation systems to improve traffic flow and transit connectivity.

• A reinvigorated commitment to environmental stewardship, including the use of landscape and stormwater strategies that will restore, enhance and expand the natural areas of campus; and sustainable building technologies that will reduce energy demand and conserve water.

• The location of strategic sites for new buildings for chemistry, neuroscience and psychology and for expansion for engineering, the humanities and the social sciences.

• The renovation and expansion of facilities to support improvements in campus life.

• The construction of a new parking facility, located south of Western Way near the natural sciences neighborhood, the academic buildings north of Prospect Avenue and Princeton Stadium, to meet the demand for new spaces based on the anticipated growth of faculty and staff associated with new facilities and the loss of existing parking spots on campus to development. A low-profile garage and landscaped surface parking lot will be set into the hillside.

• The reconfiguration and improvement of athletics fields near Princeton Stadium, including new flexible practice fields.

• The expansion of child care facilities near Broadmead and Western Way.

• The implementation of a comprehensive wayfinding program to help visitors and members of the University community navigate their way to and around campus more easily.

Groundwork for the campus planning effort began in 2003 when, under the leadership of Tilghman, a series of internal discussions took place with senior administrators, faculty, trustees, architects and other key stakeholders, producing a set of five guiding principles for campus planning and development:

• maintain a pedestrian-oriented campus.
• preserve the park-like character of the campus.
• maintain campus "neighborhoods" while promoting a sense of community.
• develop in an environmentally responsible manner.
• sustain strong community relations.

In 2005, the New York firm of Beyer Blinder Belle Architects & Planners LLP (BBB) was selected to lead the development of the plan. BBB assembled a team of specialists, ranging from landscape architects to parking experts, with whom it worked on various aspects of the plan. Neil Kittredge of BBB was the primary liaison between the firm and the University.

"This effort would not have been possible without the leadership of Neil Kittredge and his Beyer Blinder Belle team," Burstein said. "The University now has a resource that, as it is implemented, will significantly enhance our already extraordinary campus. The plan prepares for needed growth over 10 years as well as for the University's long-term future."

Many of the recommendations in the Campus Plan have already moved forward or soon will become part of the University's capital plan. Others will be incorporated into Aspire, the University's comprehensive fundraising campaign to raise $1.75 billion over the next five years. The plan concludes with a look beyond 2016, identifying potential sites for future buildings on the main campus and trying to ensure that actions taken through 2016 support coherent future expansion, consistent with principles of sustainable growth.

In addition to being available on the Campus Plan website, the brochure -- in its printed format -- will be placed on reserve at the University's Firestone Library and at the Princeton Public Library.