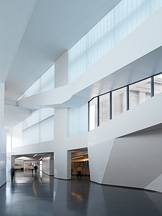 Steven Holl Architects designed an expansion and renovation of the Nelson-Atkins Museum of Art in Kansas City, Mo., which opened this past June. At left: Five translucent, rectangular pavilions placed in the hillside blend architecture with the landscape. The project won a 2008 Institute Honor Award from the American Institute of Architects. Above: The museum's design draws light down into the galleries that are banked into the hillside. Paul Goldberger, architecture critic for The New Yorker, described it as "a serene and exhilarating place in which to view art." (Photos: Andy Ryan)

Below left: The program for the School of Art and Art History at the University of Iowa pushed Steven Holl Architects to convince the school to change the building site in order to move it closer to other existing art buildings and to use a pond and a bluff as part of the landscaping. The building received a 2007 Institute Honor Award from the American Institute of Architects. (Photo: Christian Richters)

Bottom right: Steven Holl chose "A Gathering of Different Lights" as the guiding concept for the design of the Chapel of St. Ignatius at Seattle University. The metaphor of light is shaped in different volumes emerging from the roof whose irregularities aim at different qualities of light. At night, the light volumes are like beacons shining in all directions out across the campus. Most of the buildings furnishings and architectural details were designed by the architects and fabricated by local artisans. (Photo: Paul Warchol)

Steven Holl Architects, an award-winning firm with extensive experience in the arts, has been selected to design the initial academic buildings for Princeton University's new arts and transit neighborhood.

The firm, with offices in New York and Beijing, is led by Steven Holl, who was named America's Best Architect by Time magazine in July 2001 for "buildings that satisfy the spirit as well as the eye." 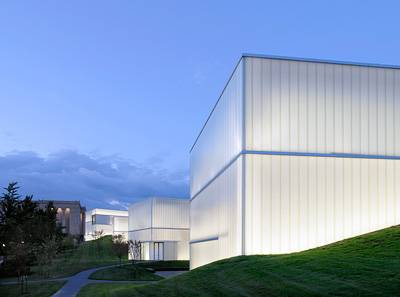 He most recently designed an expansion and renovation of the Nelson-Atkins Museum of Art in Kansas City, Mo., which opened this past June. Paul Goldberger, architecture critic for The New Yorker, wrote that Holl had produced a "striking and inventive a piece of architectural form," and described it as "a serene and exhilarating place in which to view art." The project won a 2008 Institute Honor Award from the American Institute of Architects.

At Princeton, the firm will be responsible for designing several buildings to house the Program in Theater and Dance, components of the Department of Music, the Lewis Center for the Arts and the Society of Fellows in the Creative and Performing Arts. Encompassing an estimated 135,000 gross square feet, the preliminary plans include a black box theatre, a large dance studio, an orchestral rehearsal studio, several smaller acting studios, dance studios, music practice rooms, classrooms, support spaces, a café and offices.

The move will allow the programs in visual arts and creative writing to expand at 185 Nassau St., the current location of the Lewis Center and theater and dance, and provide facilities in addition to those available in the Woolworth Center of Musical Studies.

The new buildings will be part of the arts and transit neighborhood to be created near the intersection of Alexander Street and University Place. The neighborhood is included in the University's Campus Plan, a comprehensive effort to guide development through 2016 and beyond that was produced over the last two years.

The area, already home to the McCarter Theatre Center's Matthews and Berlind theaters, is considered an ideal location for various facilities the University needs to meet the goals of the creative and performing arts initiative announced by President Shirley M. Tilghman in January 2006. Other arts facilities proposed, for which different architects will be named, are an experimental media studio and a satellite for the Princeton University Art Museum.

In April 2006, Renzo Piano Building Workshop, a firm based in Europe, was selected as the architect for the entire neighborhood design. In November that year, the firm withdrew because it was concerned it no longer had the time to commit to the project, given other commissions.

"In the end, we decided to go with more than one architect," said Mark Burstein, executive vice president. "The creative and performing arts development has a unique design challenge. The complex needs to be an extension of the existing campus and also feel very accessible by the surrounding community.

"Harmonizing buildings designed by different architects with different styles is a strength of the Princeton campus," he said. "People could also feel that one style is a little too monolithic and not as welcoming."

Burstein said one of the reasons the selection committee chose Steven Holl Architects was the firm's strength in using complicated programs as the basis for excellent architecture.

"We were looking for an architect who thrives on a complex program, and not only having a plan support that program but also having the buildings connect the programs together -- almost integrate the programs spatially," he said.

One example is the building Steven Holl Architects designed for the University of Iowa's School of Art and Art History, which received an Institute Honor Award from the American Institute of Architects last year. The school's program for the project led the architect to a compelling massing and floor plan, and also actually pushed Holl to convince the school to change the building site in order to move it closer to other existing art buildings and to use a pond and a bluff as part of the landscaping.

Burstein said the committee also was drawn to Holl because of his use of light to open up spaces. At the Nelson-Atkins Museum of Art, the firm created five glass pavilions that draw light down into the galleries that are banked into the hillside.

Steven Holl Architects has designed cultural, civic, academic and residential projects around the world, ranging from a number of other arts facilities to a public works project to a church. Paul Muldoon, chair of the Lewis Center for the Arts, is excited about the prospects of working with the firm.

"We're delighted to see the beginning of the next phase of development of the arts at Princeton, and particularly delighted to see that the responsibility of designing the first landmark buildings in the new arts and transit neighborhood falls to an architect of the first water like Steven Holl," he said.

"I use the term 'first water' advisedly, because Steven Holl has designed everything from the Whitney Water Purification Facility and Park in southern Connecticut to the Chapel of St. Ignatius in Seattle. In every case, he is clearly passionate about the relationship of his plan not only to the immediate place but the larger place of the planet," Muldoon continued. "Among my own favorites are his Kiasma Museum of Contemporary Art in Helsinki and the Center for the Arts in Herning, Denmark (currently under construction) -- buildings which are at once inspired and inspirational. We are thrilled to think that the buildings designed by Steven Holl Architects in which so much art will be made by successive generations of Princeton students will themselves be major works of art." 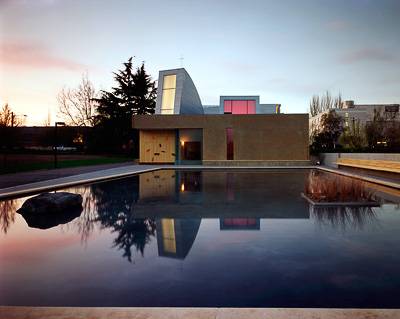 Holl sees the Princeton project as a chance to try new architectural means of promoting collaboration.

"Princeton University's campus environment presents unique challenges and opportunities for architecture to act as a social condenser," said Holl, who also is an associate professor in the Graduate School of Architecture, Planning and Preservation at Columbia University, where he has taught since 1981. "We envision a new architecture which might act as an instrument to bring different disciplines together. Unforeseen potential experiments by students and faculty for creative and performing arts might take place out of doors, partially on balconies or roofs as described in a passage on Naples by Walter Benjamin: 'Porosity results from the passion for improvisation, which demands that space and opportunity be at any price preserved.'"

Burstein noted that the landscape architect who collaborated with Holl on the water treatment facility in Connecticut was Michael Van Valkenburgh Associates, the same firm that will be working on the Princeton project. Sustainable building and landscaping practices will be of key importance.

Also participating in the project will be BNIM Architects of Kansas City, which collaborated on the Nelson-Atkins Museum of Art. Beyer Blinder Belle Architects & Planners LLP, the New York firm that led the development of the Campus Plan, will oversee the planning and design of the neighborhood.

Key members of the University's design and construction office, the Lewis Center for the Arts, the other architectural firms and Steven Holl Architects will meet soon to begin discussing the building program. At the same time, University officials will continue working with borough and township officials on zoning issues.

University Architect Jon Hlafter said there is not yet a clear vision of what the buildings will look like. He noted that there is no prevailing architectural style for the buildings in the surrounding area.

"Consequently the development of a new and coherent 'sense of place' that defines the neighborhood is not likely to take its cue from any one building already in the neighborhood," he said. "Creating a new sense of place does not imply that we should be looking for some grand and imposing gesture. It is very clear that our trustees are not interested in a megabuilding. What is needed is an open and welcoming place that the academic community and its visitors find attractive. I believe that Holl will find the right clues to design that place when he has had a good chance to understand the program."

The Campus Plan proposes a composition of smaller-scale architectural pieces arranged in an interesting and dramatic way that feels easily approachable. "The design solution should say 'come and see what interesting things are happening inside,'" Hlafter said.

Burstein noted that the University will be selecting a separate architect for the "transit" part of the neighborhood -- a proposed new transit station and retail establishments -- in the near future as well.

An open house for the campus and local communities on the arts and transit neighborhood is scheduled for 4 to 9 p.m. Tuesday, Feb. 19, at the Princeton University Store, 36 University Place.