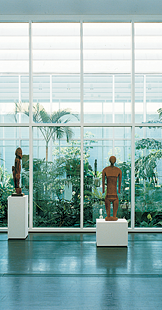 The design for the Menil Collection Museum in Houston was intended to draw upon the widest possible use of natural light. The museum's roof and skylight system, interior atrium gardens and large windows fill the galleries with natural light, reflecting subtle changes of weather, season and time of day. (Image: Hickey and Robertson)

Below left: The Auditorium Parco della Musica in Rome includes three concert halls with exteriors that have been compared to turtle shells. The halls were built as separate, sound-proofed structures, with a Roman-inspired outdoor theater providing a fourth venue between them. The complex also features a glass-covered arcade with a restaurant and shops. (Image: Maggi Moreno)

Bottom left: This experimental chamber designed by Renzo Piano Building Workshop for the Institute of Contemporary Research on Acoustics and Music in Paris features panels that can be adjusted to vary acoustic response. (Image: Berengo Gardin Gianni)

Renzo Piano Building Workshop, a world-renowned architectural firm, has been selected to develop a "neighborhood design" for Princeton University's property at the intersection of University Place and Alexander Street.

The firm, with offices in Genoa and Paris, is led by Renzo Piano, who won the Pritzker Architecture Prize in 1998. Along with his British partner Richard Rogers, he designed the Georges Pompidou Center, completed in 1978 and considered the symbol of modern architecture in Paris.

While the firm continues to work on some very large-scale projects -- the London Bridge Tower (known as the "shard of glass"), the Potsdamer Platz reconstruction in Berlin and a new headquarters for the New York Times -- it also has developed a skill in designing small-scale works such as a pilgrimage church and even subway stations.

It was the firm's affinity for spaces for the creative and performing arts and experience successfully designing projects for mixed use that attracted the University, according to Executive Vice President Mark Burstein.

The University Place/Alexander Street neighborhood already is home to the McCarter Theatre Center. The area also is being considered as a location for various facilities the University will need to meet the goals of a new creative and performing arts initiative announced earlier this year by President Shirley M. Tilghman. 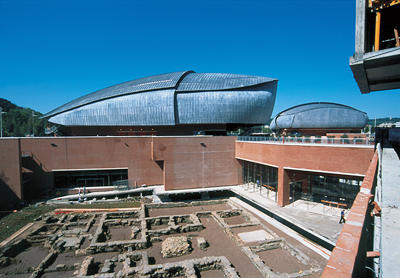 RPBW has designed many arts complexes around the world. The Auditorium Parco della Musica in Rome, completed in 2002, includes three concert halls as well as an open-air amphitheater. The buildings are surrounded by retail establishments. The Institute of Contemporary Research on Acoustics and Music extension, which houses a musical research institute in Paris, was completed in 1990. The Menil Collection Museum, completed in 1986, incorporates a main building modeled on the style of surrounding houses in the historic district of Houston, Texas, creating a "museum village."

More recent undertakings include an expansion of the High Museum in Atlanta completed last year, the renovation and expansion of the Morgan Library in New York slated to open this month (and the subject of a page 1 article in the April 10, 2006, New York Times) and the ongoing expansion of the Art Institute of Chicago. In an article about those projects in Newsweek last fall, the magazine's architecture critic wrote that Piano "works without a net, putting the basics of good design on clear display: impeccable proportion and details, inventive use of light and space, sensitivity to the surroundings."

In addition to serving as a center for the creative and performing arts, the firm's new venue at Princeton encompasses transportation and retail elements: the "Dinky" station, a depot for New Jersey Transit bus and train service; and a popular convenience store. Burstein said that RPBW has an excellent track record in designing for environments with population densities similar to Princeton and in areas where a number of different activities are taking place in one location.

"This is a place where the University and surrounding community connect, so it is a unique opportunity for us to think about neighborhood design in a way that improves the quality of residential life and also the quality of campus life," Burstein said. "Much of Renzo Piano's work is about design supporting social interaction."

Piano said, "It is a great honor and a pleasure for us to start to work with Princeton University. This area where the University and the borough and township meet provides a wonderful opportunity for a creative and performing arts neighborhood that will combine the activity of the surrounding community with the intensity of the University community." 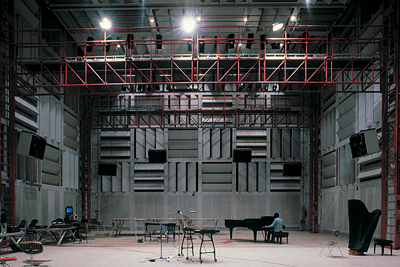 Paul Muldoon, chair of the new University Center for the Creative and Performing Arts, said he looks forward to working with the architects on the plans.

"What a thrill to have one of the greatest architects of the era design the space. This will be a site where generations of Princeton students will come into their own as creative artists and performers," Muldoon said. "Renzo Piano has an artist's vision that will help our students find theirs."

Joost Moolhuijzen, a partner in the firm, will take the lead on the Princeton project. He has spearheaded RPBW's work on the Art Institute of Chicago, a new campus for Columbia University and the London Bridge Tower.

Although the scope of the project is evolving, RPBW will be looking at elements such as the siting of buildings and the relationship between buildings and pedestrian and traffic circulation. The proposal could include new structures (such as a performing arts complex), renovated buildings (such as the Dinky facilities), a new central plaza and a new gateway to campus, according to Natalie Shivers, associate University architect. Considering possible ways to re-route pedestrian and vehicle traffic and to handle parking is a key part of the plan.

"Establishing pedestrian connections from locations such as Forbes College through the site and over to the campus is really important to knit the neighborhood into the campus," Shivers said.

RPBW also will be looking at how to incorporate retail space into the neighborhood, possibly increasing the amount of space available through mixed use facilities.

Work is expected to begin immediately, with a goal of having preliminary designs available for community review and conversation by fall.

The University Place/Alexander Street project is part of a larger effort to design several neighborhoods on campus. Last May, the University announced the selection of Hopkins Architects of London for its new chemistry building and surrounding natural sciences neighborhood off Washington Road.

The project also is incorporated in an effort to develop a long-term plan for the campus. That work is being led by Beyer Blinder Belle Architects & Planners LLP, which is collaborating with the architects selected for the neighborhood projects to ensure that their work is integrated with the campus plan. Beyer Blinder Belle and Renzo Piano Building Workshop already have worked together on the Morgan Library project in New York.