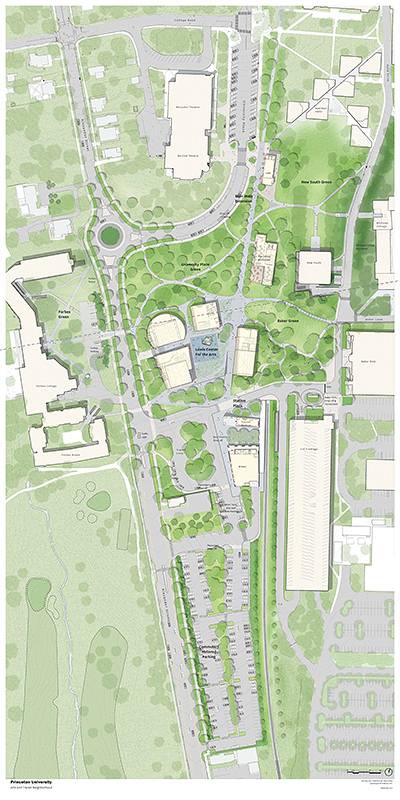 Princeton University's Arts and Transit Neighborhood project has been approved by the Regional Planning Board of Princeton, and the University will break ground in early 2013. The site plan, above, shows the location of new arts, transit and retail buildings, as well as infrastructure and landscaping improvements. Click to enlarge.(Image courtesy of Beyer Blinder Belle, Michael Van Valkenburg Associates and Steven Holl Architects)

The Regional Planning Board of Princeton approved Princeton University's proposed Arts and Transit neighborhood plan at a meeting Tuesday, Dec. 18, by a vote of 9-1. The approval clears the way for the University to break ground in early 2013.

The plan, for an area along University Place and Alexander Street just south of the McCarter Theatre Center and just east of Forbes College, includes three new arts buildings, which are being designed by the world-renowned architect Steven Holl, to house the Lewis Center for the Arts and some functions of the Department of Music. The plan also includes designs by the award-winning architect Rick Joy for a new Dinky train station and Wawa convenience store, and renovation of the existing rail station buildings for a restaurant and café. Infrastructure improvements to the site and adjacent roadways, a multimodal transit center and extensive landscaping are also part of the project.

Last fall, Princeton Borough and Princeton Township granted zoning approval for the plans. The planning board's vote Tuesday provided the final site plan approval needed for the Arts and Transit project, which was a major component of the University's 10-year comprehensive Campus Plan, announced in 2006. The project furthers University President Shirley M. Tilghman's initiative to make the arts a central feature of the academic experience at Princeton.

"I want to express my appreciation to the Planning Board members and staff for all of the time they devoted to this project and for giving us the green light to proceed with a project that I am convinced will have a transformative impact on the arts at the University and in the community," Tilghman said. "I believe the project will create an attractive new gateway into the community and will meet a broad range of goals related to transit issues and sustainability that are important to both the community and the University."

The Lewis Center for the Arts, established in 2007, will have office space, classrooms, galleries and performance venues within the new complex, which is expected to be completed in 2017.

"I'm delighted that we have moved on to the next stage of this project — one that will bring new artistic energy and excitement to our community as a whole," said Michael Cadden, chair of the Lewis Center for the Arts and a senior lecturer in theater. "Along with my colleagues at the Lewis Center and in the Department of Music, I look forward to collaborating with our students, our friends at the McCarter, and the greater Princeton community in making this neighborhood a site for the making and enjoyment of art that will be the envy of the world."

The plan builds upon on the neighborhood's existing arts and transit elements, the McCarter Theatre Center and the New Jersey Transit Dinky train that runs between Princeton and Princeton Junction.

"Over the past six years we have had numerous opportunities to discuss our plan with members of the Planning Board, municipal officials, and other members of the public in connection with the community's review of its master plan, in obtaining zoning that permitted the development of this site to support the arts, and in seeking approval for a plan that fully conforms to the zoning and integrates infrastructure improvements, exceptional landscape design, and buildings designed by two of the country's leading architects," said Vice President and Secretary Robert Durkee. "We will now do our best to keep the community fully informed about the construction schedule and to minimize disruption as much as possible as we now proceed with the development of the site."

The arts buildings, totaling 139,000 square feet, will be the Wallace Dance Building and Theater, a music building, and a building with multiple uses such as administrative space, a box office and a gallery. In addition, the Arts and Transit neighborhood will provide community spaces such as a broad public walkway, an Arts Plaza, a Transit Plaza and a large forum space that opens on to the Transit Plaza as well as each of the buildings on the Arts Plaza.

The transit portion of the project will include a new roundabout at the intersection of University Place and Alexander Street; a new pedestrian crossing at Forbes College; and a Transit Plaza featuring the new station, the new Wawa store, stops for buses, taxis and shuttles, bicycle rental and storage facilities, permit and meter parking, and a new access road to the University's West Garage.

Sustainability — in the form of reduced carbon emissions and improved stormwater management — is a key consideration in the traffic flow improvements to the area and the design of the new buildings and spaces.