Princeton University has selected Terra Momo Restaurant Group, owner and operator of four local restaurants, to serve as its partner in operating the café and restaurant that will be housed in the current Dinky station buildings in the Arts and Transit Project.

The project, which covers an area along University Place and Alexander Street just south of the McCarter Theatre Center and just east of Forbes College, includes a new Wawa convenience store and new Dinky train station for the NJ TRANSIT train that runs between Princeton and Princeton Junction. The project also includes three new campus arts buildings and renovation of the rail station buildings for the café and restaurant. 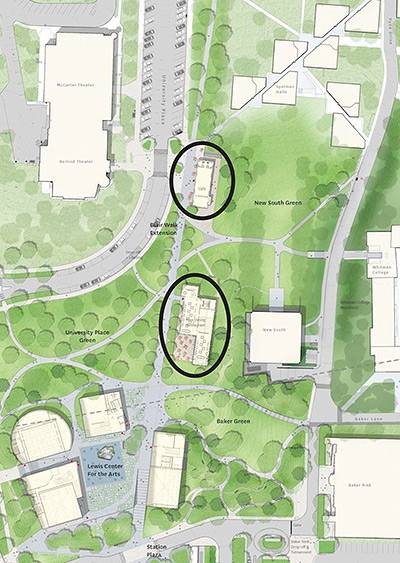 As shown in the site plan above, the current Dinky Station buildings, located along University Place near McCarter Theatre, will be converted into dining establishments in the planned Arts and Transit Project. The north building will become a cafe, and the south building will be expanded and turn into a full-service restaurant. (Image courtesy of Beyer Blinder Belle, Michael Van Valkenburg Associates and Steven Holl Architects)

"Terra Momo presented thoughtful and exciting plans for both the café and restaurant that would meet the needs of commuters, McCarter Theatre, local residents and the University. They have strong ties and demonstrated success in Princeton," said Kristin Appelget, director of community and regional affairs and a member of the University selection committee. "We are looking forward to collaborating with Raoul and Carlo Momo and their team at Terra Momo on these new dining options that are such an important component of our Arts and Transit Project."

The University will immediately enter into a letter of intent with Terra Momo, owned by brothers Raoul and Carlo Momo, confirming the group's selection, and the two parties will now negotiate lease terms.

The café and restaurant will focus on serving locally grown and produced fare. Terra Momo plans to establish a pizzeria-style café in the north terminal building, with 54 seats including bar seating. The café will serve breakfast, lunch and dinner as well as wine and beer. Opening is projected for summer 2015.

In the south building — formerly used for baggage handling — the group has proposed a farm-to-table restaurant serving lunch and dinner, with seating for 116 patrons inside and 60 seats outside. The University will expand the building before Terra Momo begins interior renovations, and the anticipated opening date is spring 2016.

"We're happy and very excited and looking forward to this," said Carlo Momo. "Even though there's some sense of comfort knowing we're involved, we're also going to surprise people. We hope the café and restaurant will add, with the arts neighborhood being scheduled for that part of town, a whole other dimension and attraction to Princeton itself. Princeton is becoming more and more of a destination and we'd like to make it a dining mecca too."

The University contacted area restaurateurs in summer 2012 to gauge their interest in the project, and a request for proposals went out in the fall.

The selection committee consisted of representatives from a variety of University offices, assisted by independent food service consultant Tracy Lawler, who is based in the town of Princeton.

Tucson, Ariz.-based Rick Joy Architects will design the exterior and addition of the existing station buildings; the firm is also designing the new Dinky station building and Wawa. The north station building currently serves as a waiting room for the Dinky train, and renovations on this building and expansion of the south building will not begin until fall 2013, when a temporary train platform opens to the south. For the south building, one of the conditions for Terra Momo is that the east-facing exterior stone wall, which will become an interior wall after the addition is built, must remain visible.

This spring, construction begins with the construction of a new commuter parking lot, a roundabout at Alexander Street and University Place and the temporary train platform. Next, the new station and Wawa will be built and the existing station buildings will be renovated and expanded. The final phase of the Arts and Transit Project — construction of the three academic buildings — will be completed in summer 2017.