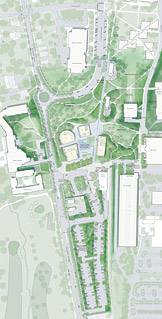 The proposed Arts and Transit project on the western edge of the Princeton campus would form a public space that is a nexus of both campus and community life. New public plazas and improved traffic circulation would complement new facilities to support the arts and a new New Jersey Transit Dinky station. Click to enlarge.

As Princeton University officials prepare to submit plans for the proposed Arts and Transit project to the Regional Planning Board of Princeton for site plan approval, they have selected an architect to design the new Dinky station building and Wawa and to renovate the existing station buildings for use as a restaurant and café.

The architect, Rick Joy, of Rick Joy Architects, is one of the leading young American architects. He is based in Tucson, Ariz., and has experience designing train stations and retail space, and in working in university settings. He will design the proposed building that would house the new Dinky station and Wawa, and will redesign the current station buildings, which are intended to become retail restaurant spaces. Joy will be joining a design team that includes Steven Holl Architects, the firm that is designing the project's academic buildings, neighborhood planners Beyer Blinder Belle and landscape architect Michael Van Valkenburgh Associates.

"Rick was selected for his ability to understand the significance of a place and its landscape and for his focus on the way the public experiences architectural space. He has an international reputation for creating timeless architectural form and space with a beautiful sense of material and craft," said University Architect Ronald McCoy. "We are confident he will be able to create a meaningful civic place, one that will have a rich interaction with the Steven Holl design for the Lewis Center for the Arts."

Joy is the recipient of the 2002 American Academy of Arts and Letters Award in Architecture and the 2004 National Design Award. He has served as a visiting professor at the Harvard University Graduate School of Design, Rice University, the Massachusetts Institute of Technology and the University of Arizona.

The plans for construction of the new station and renovation of the existing station buildings will be included in the University’s submission to the Planning Board, which is expected to occur later this spring. In a Feb. 2 letter to the Planning Board, Vice President and Secretary Robert Durkee noted that while the University has had numerous opportunities to discuss the concepts behind the project with the Planning Board and other members of the community, it has continued to make adjustments "to accommodate specific requirements in the new zoning ordinances and to reflect both suggestions from members of the community and the more detailed design that can be done now that zoning is in place to allow us to proceed with the project." Princeton Township and Princeton Borough adopted new zoning ordinances last fall to allow development in this area for the arts.

"The location and orientation of the Steven Holl buildings have been shifted a bit to the south and the buildings themselves have been repositioned on the site," Durkee wrote. "These modifications allow us to meet zoning requirements, but they also respond to some community concerns about whether the site will be sufficiently open and accessible to members of the community. The relocation and reorientation also respond to community interest in making sure that the site can accommodate possible future mass transit options by introducing greater flexibility in the area near the roundabout north of the first-phase academic buildings.

"The modified design also improves walking paths from Forbes College to the campus (increasing the likelihood that these paths will be utilized); provides a greater sense of connectedness between the first-phase arts buildings and the transit area (by increasing the orientation of the buildings toward the transit plaza and the station building); significantly improves traffic patterns and short-term parking options in the transit plaza; and reserves the possibility of a later-phase building at some point in the future on the site between the Steven Holl buildings and University Place."

The proposed Arts and Transit project on the western edge of the University's campus would form a public space that is a nexus of both campus and community life. New public plazas and improved traffic circulation would complement new facilities to support the arts and a new New Jersey Transit Dinky station 460 feet south of the current station. These new activities in the area will build upon and strengthen the longstanding presence of two anchors of the Princeton community: McCarter and Berlind theaters and the Dinky.

The proposed Arts and Transit area will be the home of the new Lewis Center for the Arts with the requisite new teaching, rehearsal, performance and administrative spaces for drama, music and dance. Future phases could include an experimental media studio and a performance hall. Combined with other facilities on the University campus and in the community, the neighborhood is expected to become a vibrant cultural destination for the region.

Detailed information about the history and design of the Arts and Transit project is available on the project's site. The project is part of the University's comprehensive Campus Plan.