Princeton University administrators shared updated plans for the design and phased construction of the Arts and Transit Project at a campus meeting Feb. 11.

Ron McCoy, the University architect, discussed the design of the project while Anne St. Mauro, assistant vice president for facilities, design and construction, discussed the construction schedule at a meeting of the Council of the Princeton University Community (CPUC), a deliberative body made up of faculty, students, staff and alumni.

The project, which covers an area along University Place and Alexander Street just south of the McCarter Theatre Center and just east of Forbes College, includes a new Wawa convenience store and new Dinky train station for the NJ TRANSIT train that runs between Princeton and Princeton Junction, three new campus arts buildings, and renovation of the existing rail station buildings for a restaurant and café. It also includes infrastructure improvements to the site and adjacent roadways, a multimodal transit center and extensive landscaping.

With the Regional Planning Board of Princeton's approval of the project in December, the site is being prepared for construction. Some University-owned buildings along Alexander Street have already been marked for demolition, with placards for first responders as to the condition of the building. Some of the buildings were vacant and University offices in other buildings have been relocated.

"Within the next month, we envision the (construction) fences coming up, and the buildings coming down," St. Mauro said. 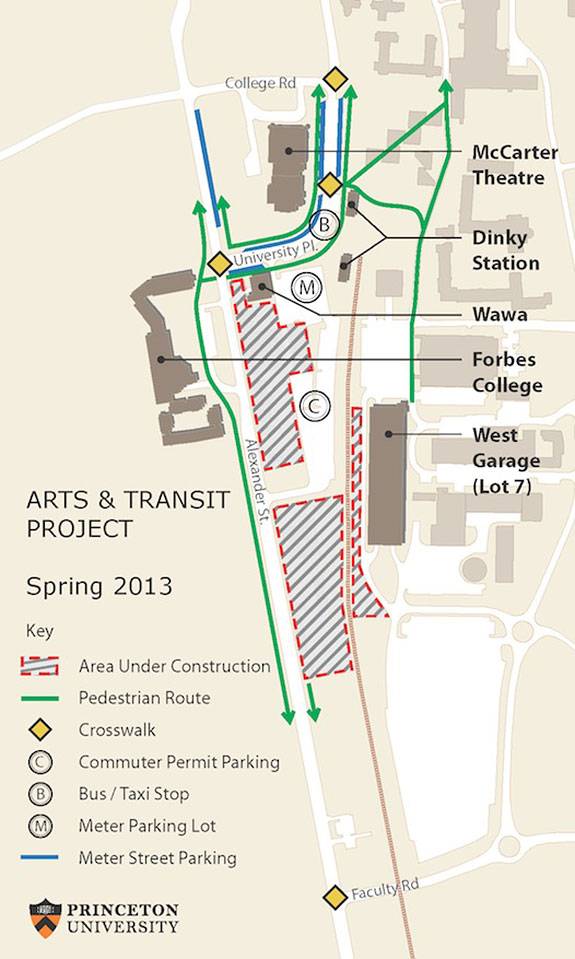 Construction on the Arts and Transit Project begins this spring. The map above, which shows the site during the first stage of construction, includes landmarks such as the Dinky station and Wawa, construction zones, parking and new pedestrian routes. (Image courtesy of the Office of the University Architect and Office of Design and Construction)

The planned project schedule is:

St. Mauro said the construction phases were designed to minimize disruptions, and the University will be notifying affected groups about work that will impact them. As pedestrian and vehicular paths shift to accommodate construction, signs will be posted to advise the public about new routes. In addition, maps that identify construction zones and new routes will be available on the Arts and Transit Project website.

Much of the construction information discussed at the CPUC meeting also has been posted on the Arts and Transit Project website, along with a new set of frequently asked questions about construction and a page for individuals to sign up for email alerts about new construction or transit information.

The project is a major element of Princeton President Shirley M. Tilghman's initiative to make the arts a central part of the academic experience at the University. The three arts buildings to be constructed will provide additional space for the University's Lewis Center for the Arts and the Department of Music, and will bolster an arts neighborhood that includes McCarter Theatre Center and creating writing and dance spaces in the New South building.

McCoy presented detailed illustrations of the academic buildings and pathways, public and commercial buildings, open spaces, traffic improvements, and landscaping. He began by noting the scope of the project.

"This is a transformation of the western side of campus in a large way," McCoy said. "It's 22 acres. It's the largest single development in the history of the campus, larger than the original campus of Princeton University."

Highlights of the project include: