A major entry to the Princeton campus and community is being redesigned as a 21st-century portal with the door lodged firmly open.

At an open house for the community Wednesday, Sept. 17, Steven Holl Architects unveiled concepts for the initial academic buildings in the new arts and transit neighborhood. In addition, Beyer Blinder Belle Architects & Planners presented updated information on traffic circulation and other plans for the area near the intersection of Alexander Street and University Place.

A model and visual displays set out at the Paul Robeson Center for the Arts showed a proposed three-sided complex situated on Alexander and University across from Forbes College and McCarter Theatre. It will be home to the University's Lewis Center for the Arts, as well as several performance and teaching spaces for the Program in Theater and Dance, the Department of Music and the Society of Fellows in the Creative and Performing Arts.

"Among the many things I love about Steven Holl's initial design is the extent to which it incorporates a very potent feature of the archetypical Princeton courtyard," said Paul Muldoon, chair of the Lewis Center. "One has heard the architecture of Princeton likened to that of Oxford. There's a subtle, but significant, difference. The Oxford quadrangle has four sides and a door that says, 'Stay out.' The Princeton courtyard has three sides and no doors or gates. It says, emphatically, 'Come in.'

"Steven Holl's design echoes that three-sided aspect," he continued. "It is an embodiment of Princeton University's deep desire to open its arms to the Princeton community. The building is itself offering an embrace."

In an interview before the open house, Holl said, "This is not like the other squares of the campus. It's more like another town square. There will be events at night. People will come here. It isn't like the campus is pushing out; this is like an indentational space that becomes a shared space that everyone is invited to. There are no closed gates here."

This area, already home to the McCarter Theatre Center's Matthews and Berlind theaters, is considered an ideal location for various facilities the University needs to meet the goals of the creative and performing arts initiative announced by President Shirley M. Tilghman in January 2006.

Emily Mann, artistic director of McCarter Theatre, said, "We are very excited by the potential of the arts and transit neighborhood. The opportunities that it will present promise to be a great addition to McCarter Theatre and our patrons." 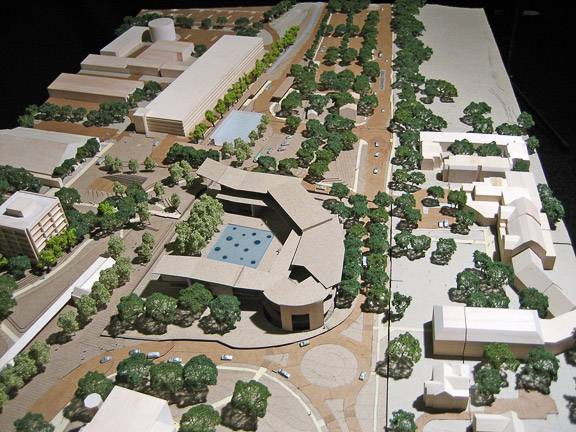 This model shows the proposed three-sided arts complex on the left and Forbes College on the right looking south down Alexander Street. The large pool with skylights in the center of the buildings is shown, while the green roofs are not in this model. The traffic circle leading to a reconfigured University Place is mirrored by the arced-corner lecture hall. Image: Princeton University

Holl's award-winning firm, which has extensive experience in the arts, was named as the architects for the project in January.

"It's a very special project for me because I know that it's so complicated," Holl said.

He said he was inspired by a talk Muldoon gave to the community about the ability to view arts activity serving as a catalyst.

Encompassing about 130,000 gross square feet, the three contemporary buildings will share a common reception area and will house several public spaces, including an art gallery, a black box theater, a dance studio and a music rehearsal room. The latter three are designed to serve as both rehearsal and performance venues. While materials for the buildings have yet to be chosen, Holl is intending a transparency that will allow inviting views into the arts activities.

"You will feel like you're almost inside when you're outside and you're passing through," he said. "Paul Muldoon's inspiration mixed really well with my idea of porosity."

University Place would be extended as a pedestrian walkway and pass the complex along a courtyard before coming to a new transit plaza and Dinky station to the south.

In the plans, the courtyard is built around an 89-by-89-foot pool that is filled with recycled and filtered stormwater. The shallow water would be allowed to freeze in the winter, so in all seasons the pool is translucent and a piece of art itself. The pool would have skylights that would provide natural light to the large reception space below called the forum, which would connect the buildings on the lower level.

According to Chris McVoy, senior partner at Steven Holl Architects, the buildings are designed to be set into the site in a way that minimizes their height. "This gives it the right scale relative to the community as well as the adjacent University facilities," he said.

The complex will be a model when it comes to sustainability, McVoy said. In addition to having the pool for daylighting the forum, stormwater collection, and graywater treatment and reuse, the facility will be covered with green roofs made of sedum. Geothermal wells beneath the site are planned to provide all of the energy necessary to heat and cool the complex, as well as the new Dinky station proposed nearby.

Holl said he looks forward to working with those involved to see his vision come to fruition.

"I'm very confident that we can make something that's really inspirational," he said. "It will be fresh and new." 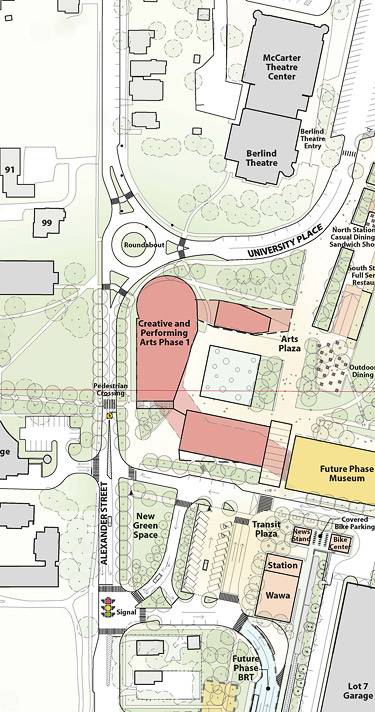 This neighborhood design schematic plan shows the arts complex in relation to the transit plaza to the south and the new Dinky station and Wawa convenience store proposed nearby. Image: Princeton University

Traffic and other plans

In the coming months the University will be working with the Regional Planning Board and municipal officials on further planning for the project and on potential rezoning for the area, which lies in both Princeton borough and township.

Neil Kittredge, a partner at Beyer Blinder Belle, provided an update on traffic circulation, parking, retail space and other plans for the neighborhood. As discussed at earlier gatherings, the intersection of Alexander Street and University Place would be reconfigured from a "T" with a traffic light to a roundabout to ease traffic congestion. Traffic lights would be installed south of the roundabout at a pedestrian crossing for Forbes College and at a roadway that would connect Alexander to a relocated Dinky station and the University's Lot 7 parking garage, which currently can be reached only by driving through the campus on Elm Drive.

The plan includes incorporating the Wawa convenience store into the Dinky station, along with a newsstand, bicycle storage facilities and other amenities such as a heated/air-conditioned waiting area and restrooms. A carefully designed transit plaza would provide convenient access to the Wawa and the station, and would accommodate an enhanced University shuttle service, a community jitney service and potential bus rapid transit service.

"The drop-off area would be off the main corridor of Alexander Street," said Kittredge, pointing out how congested the area on University Place near the Wawa and Dinky station currently is, with cars regularly backing into heavy traffic.

A relocated Dinky commuter lot south of the station also is included in the plan as are long-term as well as short-term parking spaces, enhanced wayfinding and extensive landscaping.

The creation of an arts and transit neighborhood that more fully integrates campus and community is part of the 10-year Campus Plan unveiled by the University at the beginning of this year. Beyer Blinder Belle led the development of the plan and is continuing to work on various aspects of its implementation. Other arts facilities proposed for the area, for which different architects will be named, are an experimental media studio and new contemporary galleries for the Princeton University Art Museum.