"Behind the scenes" is a common phrase in the performance world. At Princeton University, one "performance" in particular that has been going on behind the scenes for nearly a decade will premiere in one year. On the weekend of Thursday through Saturday, Oct. 5-7, 2017, the new Lewis Center for the Arts — a dynamic multi-facility complex that will greatly expand the performance, rehearsal and teaching spaces for the arts — will open its doors and spaces to the University and greater Princeton community.

The celebratory opening weekend will reflect what is unique about the arts at Princeton, and include performances, readings, concerts, exhibitions and the biennial Princeton Poetry Festival. It will showcase the work of Princeton students, faculty, alumni and guest artists. Audiences will be invited into the creative process through open rehearsals, scholarly discussions, readings and other events. 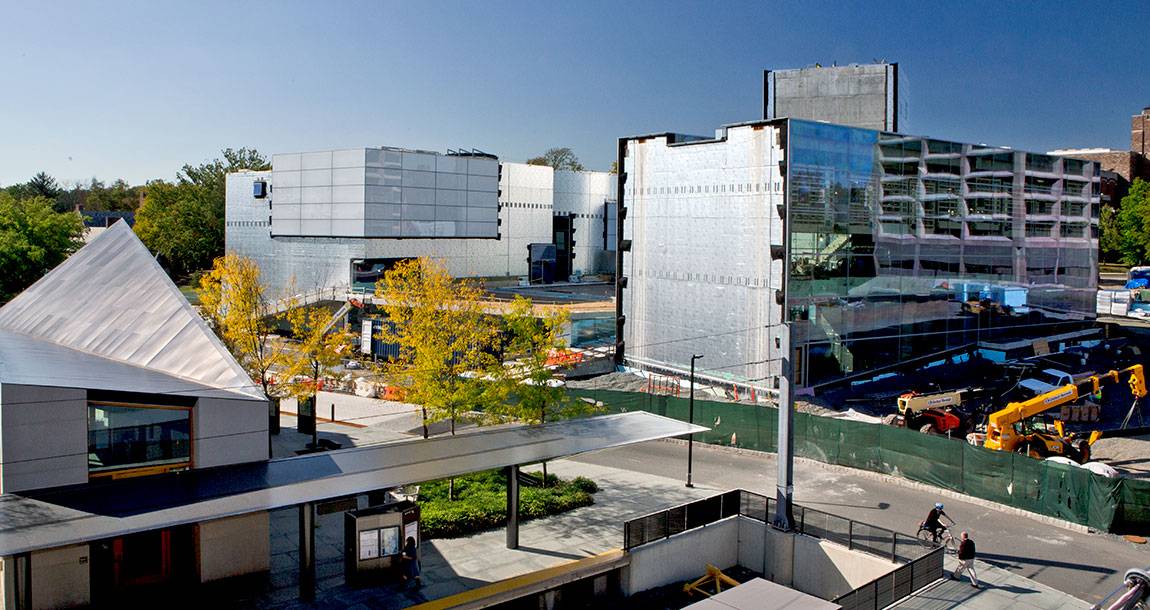 The village-like cluster of buildings that comprise the new Lewis Center for the Arts, near University Place and Alexander Street on the south edge of campus, anchors the 22-acre arts and transit complex. The new center will support the University's academic programs in dance, theater, music theater, the visual arts and music — and open with a weekend of festivities from Oct. 5-7, 2017. (Photo by Denise Applewhite, Office of Communications)

The arts complex, designed by Steven Holl Architects, occupies about 145,000 square feet. It includes three buildings: the Music Building, the Wallace Dance Building and Theater, and a six-story tower. Together, this village-like cluster of buildings and public spaces will support the University's academic programs in the arts, particularly dance, music, music theater and theater, offered through the Lewis Center for the Arts and the Department of Music.

The buildings near University Place and Alexander Street on the south edge of campus anchor the 22-acre arts and transit complex, a $330 million development that includes a restaurant and café located in two renovated train station buildings, a convenience store, and a new train station. The NJ TRANSIT train station, Wawa convenience store, and Dinky Bar and Kitchen café have opened. The complex will be surrounded by a park-like setting with extensive landscaped plazas, pathways and green spaces.

Holl, a 2012 American Institute of Architects Gold Medalist, has designed landmark arts venues around the world, including the forthcoming expansion of the Kennedy Center in Washington, D.C. In 2014, he received the Praemium Imperiale award for his contributions to the development, promotion and progress of the arts.

Across the street from the complex is the McCarter Theatre Center, which includes the Matthews and Berlind theaters, considered among the leading regional performance venues in the country.

The new arts center, along with program expansions in the arts, was made possible, in part, by an unprecedented $101 million gift from the late Peter B. Lewis, Class of 1955, given to the University in 2006. Brothers Monte J. Wallace, a 1953 alumnus, and Neil W. Wallace, a 1955 alumnus, contributed $15 million for the Wallace Dance Building and Theater. A Princeton alumnus and his wife gave $10 million in support of the Music Building, and numerous other individuals have made generous gifts towards the project for interior performance and practice spaces. 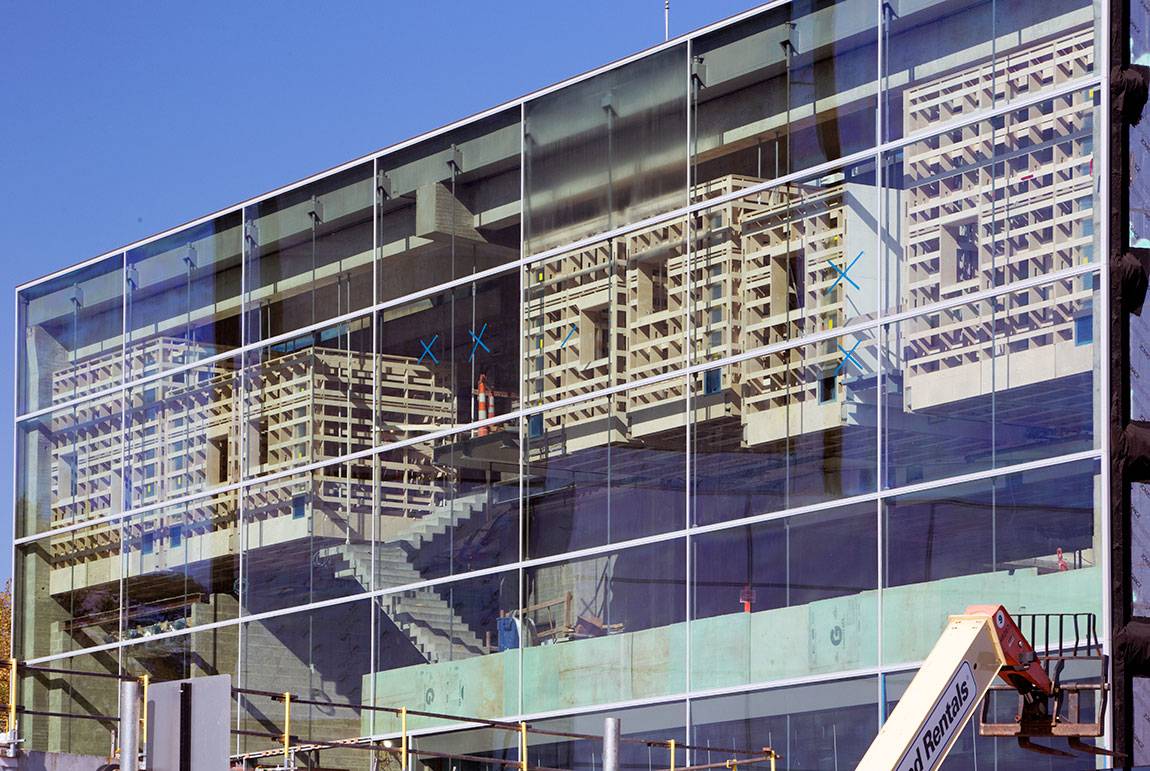 The practice rooms and teaching studios in the Music Building are suspended from the roof structure to assure sound isolation. The three-story building will include a two-story acoustically isolated Instrumental Rehearsal Room with soaring 30-foot ceilings, and equipment for professional-quality audio recordings. (Photo by Denise Applewhite, Office of Communications)

The sound of music

The 23,000-square-foot Music Building will supplement the 47,000-square-foot Woolworth Center of Musical Studies near the center of campus. The three-story building will include a two-story, 3,500-square-foot, acoustically isolated Instrumental Rehearsal Room with soaring 30-foot ceilings, a flexible seating configuration allowing for performances, and equipment for professional-quality audio recordings. The space's adjustable acoustics will accommodate diverse groups such as the Princeton Laptop Orchestra (PLOrk), the chamber orchestra Sinfonia, a multitude of jazz ensembles, and the 90-piece Princeton University Orchestra.

An 800-square-foot jazz studies studio is one of several specialized teaching facilities in the Music Building. A large number of acoustically advanced practice rooms and teaching studios are located on the second and third levels, featuring new pianos from Steinway & Sons.

The practice rooms and teaching studios are suspended from the roof structure to assure sound isolation. Each teaching studio has room for a teacher, student and up to two grand pianos. Several rooms also include audio recording and playback systems.

"I think what is most exciting about the new center is knowing that we now have the facilities — pianos, performance spaces, technology — that are worthy of the extraordinary talent of our students and faculty," said Wendy Heller, chair of the music department and the Scheide Professor of Music History.

"For many decades, music performance at Princeton was in the basement of Woolworth," Heller said. "This was an activity that happened 'under the stairs,' so to speak, in windowless rooms, often in the dead of night. We're not merely expanding into a new building; our students — and the music that they play — will come out of the depths and into this extraordinary new space, full of light and energy.

"I am excited about how the new center will shape thinking about the arts on campus, and attract students, faculty and community members who might not otherwise have even known anything about the creative work that happens at Princeton," she said. 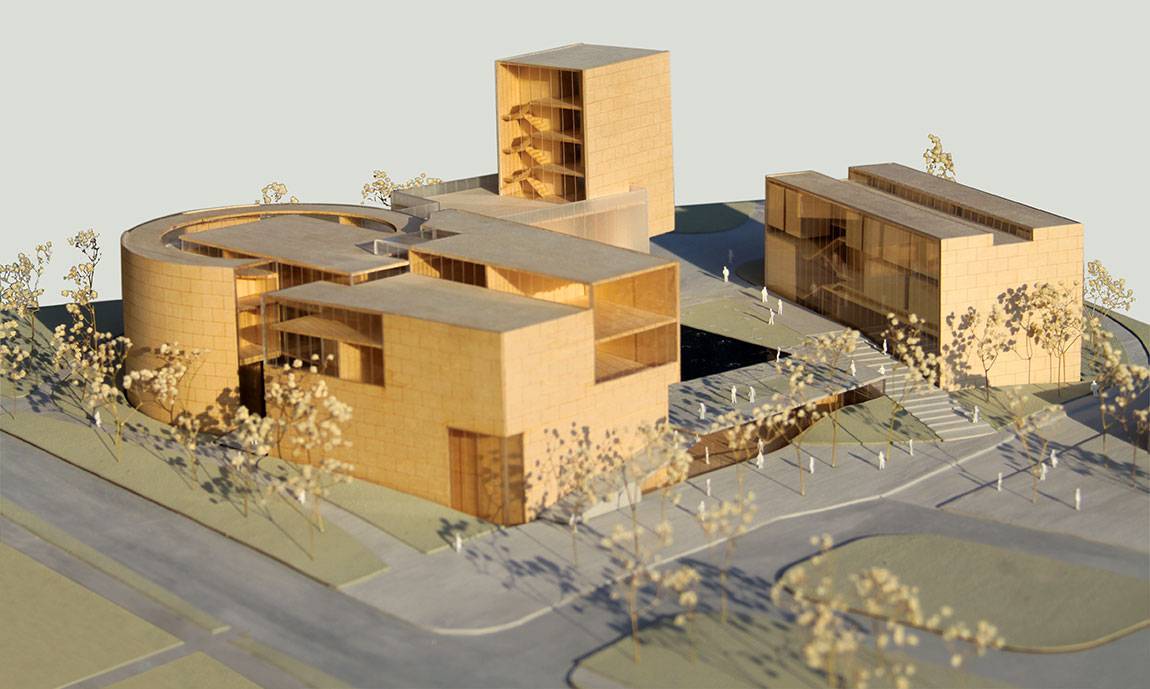 The Wallace Dance Building and Theater, shown in a model, features a visually striking curved structure (visible at left) and will greatly expand teaching and performance spaces across campus. The complex will be surrounded by a park-like setting with extensive landscaped plazas, pathways and green spaces. (Courtesy of Steven Holl Architects)

Lights up on center stage

The Lewis Center buildings will greatly expand the rehearsal and performance spaces available on campus — including 185 Nassau St. and studios in the New South building. Inside the Wallace Dance Building and Theater is a 3,600-square-foot dance theater with flexible seating for 120 and a 3,600-square-foot black box theater with flexible seating for up to 150. Each venue is a two-story performance space equipped with professional lighting and rigging and recording capabilities. A 2,000-square-foot acting studio is designed for smaller, more intimate performances with seating for 75. It includes a permanent raised stage, resilient floor and flexible seating that can be arranged in multiple configurations. The building also contains four smaller acting studios, a warm-up studio, a theatrical design studio and two dance studios, one of which can also serve as a performance space.

The buildings incorporate transparent, translucent and opaque materials, a design that provides glimpses into what is happening inside and will make the buildings glow at night. Observing this play of light, Michael Cadden, chair of the Lewis Center for the Arts and a senior lecturer in theater, said: "What's really going to make the place shine, of course, is the work that gets done there. The arts have needed more 'lab space' since I came to Princeton almost 35 years ago and the need has only grown."

He said that the spaces of the new Lewis Center are "built specifically as laboratories for the exploration of the arts we practice and venues to share that work with the community."

The Arts Tower is a six-story structure with an additional dance studio, an art gallery, box office, arts library, conference room and administrative offices for faculty and staff. The Program in Visual Arts will remain centered at 185 Nassau St., while New South will continue to house the Program in Creative Writing, as well as additional dance and theater studios. The programs will support each other and a host of interdisciplinary opportunities in each venue. 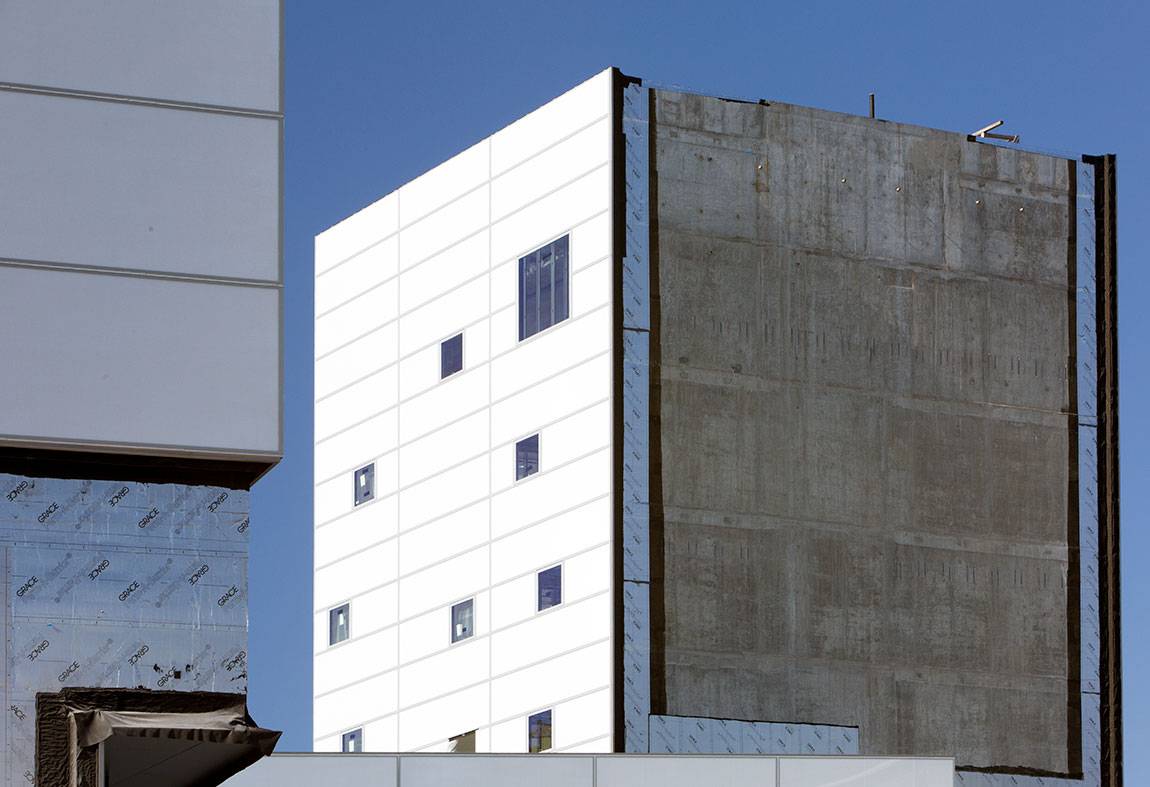 'A locus of artistic energy'

All three buildings are connected by a forum on the ground level, an 8,000-square-foot lobby and gathering space that contains entrances to the three main performance venues: the black box theater, the dance theater in the Wallace Dance Building and Theater, and the Instrumental Rehearsal Room in the Music Building. The forum also connects to a collaborative lab, or CoLab, which will seat 75 people and be used for interdisciplinary projects and multimedia presentations. Above the forum is an outdoor plaza with a reflecting pool; skylights in the pool will bring water-filtered light into the forum.

"Buildings change the way people feel about themselves and each other; I can't wait to see how the new center will inspire students and faculty, to think in new ways about themselves, their relationships, and their work, and to imagine a different kind of future that would surprise all of us in 50 years," Heller said.

Cadden said that he is "equally excited about the synergistic potential of the outdoor spaces we're creating," including the plaza, with its courtyard, and another outdoor space, Baker Green, just behind the music building. "[These] will also be an open invitation to the imaginative student looking to collaborate with both the natural world and Steven Holl's dancing architecture," he said.

"The new buildings will create a locus of artistic energy unprecedented in Princeton's history and will undoubtedly lead to more collaborations among folks at the University, with our friends at McCarter Theatre Center and with the broader Princeton community. I never thought I'd live to see this day!" Cadden said.