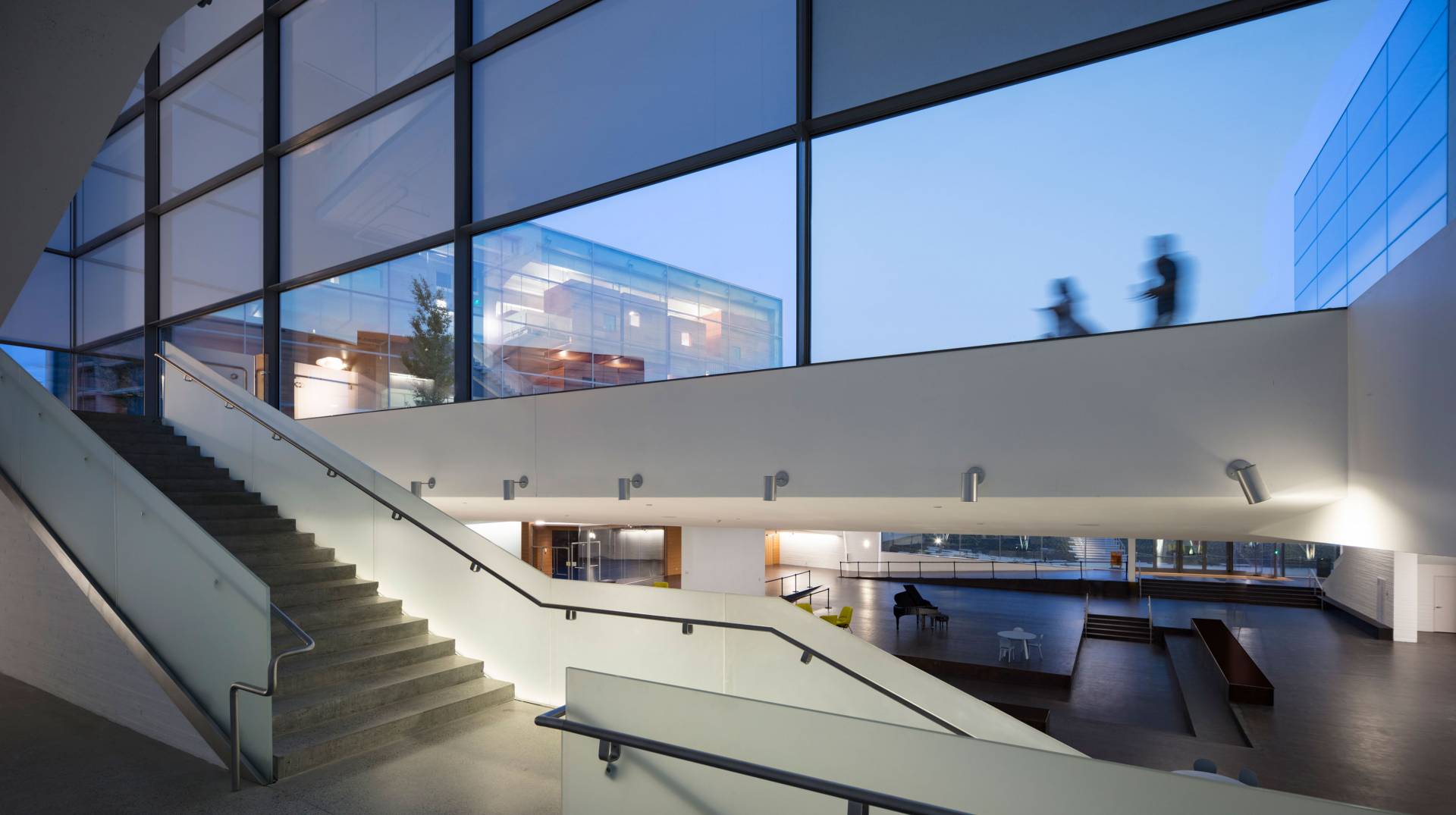 View of the plaza and New Music Building from the forum of the Lewis Arts complex.

The Princeton community has only been able to glimpse the construction of the new Lewis Arts complex through mesh-covered fences over the course of the past three years. Slowly but surely, its three distinct buildings have risen higher and higher, finally reaching over the fences. Now, the fences are gone and everyone can walk straight through the main pathway from the new train station, along the plaza that connects the buildings, to the heart of campus.

The Lewis Arts complex was designed as a "project inside a larger project, which in its original days was the arts and transit neighborhood," said Ron McCoy, University architect and a 1980 graduate alumnus.

"It is part of campus-making but also community-making, because we have now created a new transit plaza with the station and the Wawa [convenience store] and transformed the former buildings of the train station into the Dinky Bar and Kitchen, and Cargot restaurant," he said.

McCoy added: "And all of this was chosen partly because of its synergy with the McCarter and Berlind theaters. The complex is inside a larger neighborhood that is really part of the arts in Princeton. So people can come off the train, park in the parking garage and get access to the restaurants and performances here. This is a project that tries to weave together ... facilities for the students, for the community and for the larger University." 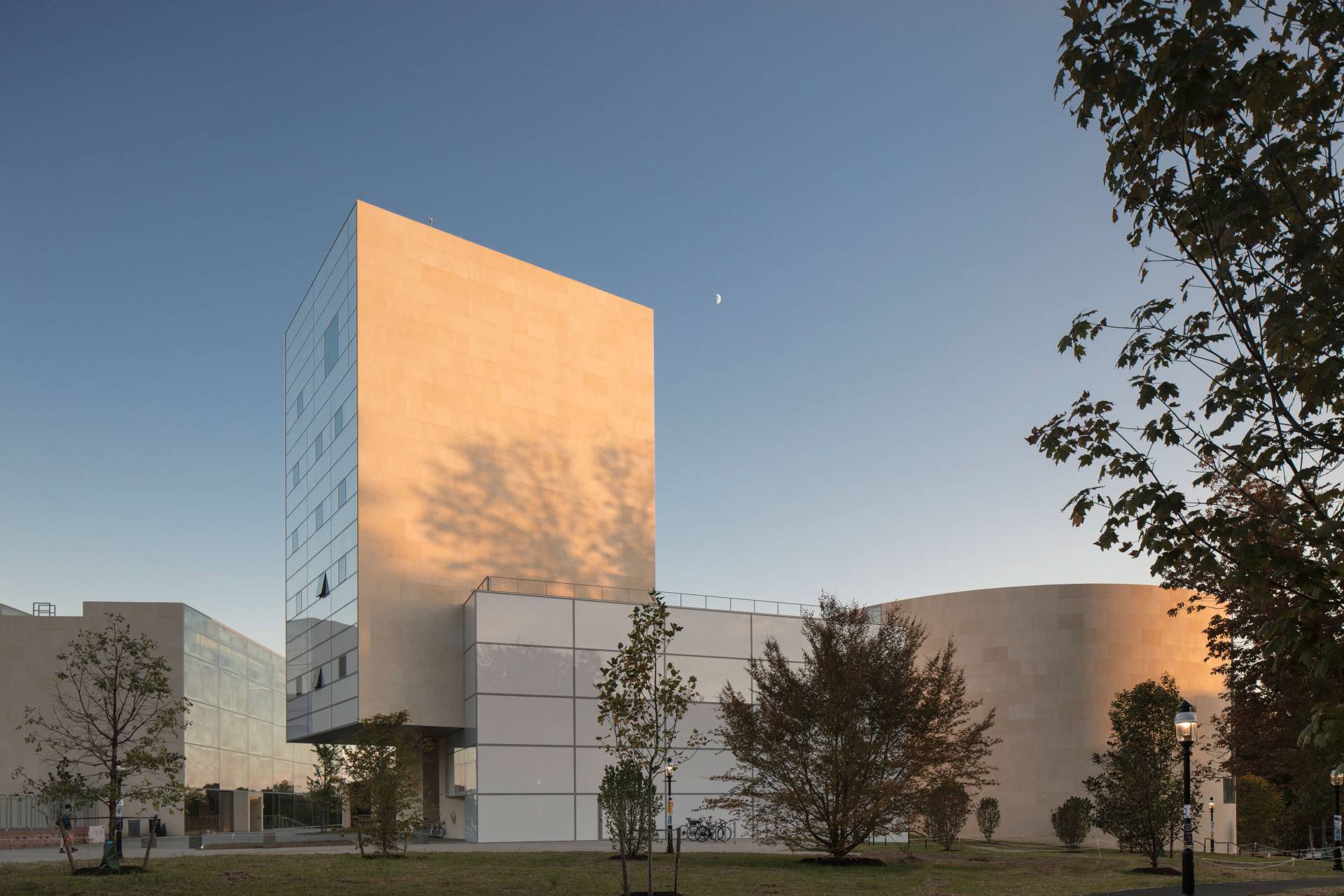 On a Sept. 25 media tour, Noah Yaffe, a partner at Steven Holl Associates, the architecture firm that designed the complex, described how the buildings work both independently and synergistically, connected by a large underground Forum that promotes collaboration and community.

"It's a rare opportunity to have a project to work on that is both transformative on a campus level and also transformative for the departments and programs housed within," Yaffe said.

He said the architects worked carefully to create easy ways for students to move in, through and around the buildings. "Along these campus networks and paths, students would have a glimpse of the arts in action, and that that chance encounter would pique their curiosity and possibly be a life-transformative experience."

The artistry of the architecture is apparent in the details.

For example, encased in soaring cherrywood walls, the Lee Music Performance and Rehearsal Room resembles the belly of a giant violin. The pattern in the perforated white metal sides of a "dancing staircase" in the Wallace Dance Building and Theater is inspired by labanotation, a system used by choreographers to record human movement. The back wall of the Wallace Theater, a state-of-the-art black box, can open up to expand the performance area, revealing the curve of the cylindrical tower it sits within — a nod to ancient Greek amphitheaters.

Each of the 20 practice rooms in the New Music Building has a skylight or window to create a hospitable space for students practicing for hours at a stretch. Holl personally designed the rugs outside the practice rooms based on a piece by 20th-century American composer Morton Feldman. The lighting fixtures on the walls — five short horizontal bars — are inspired by the lines on a musical staff.

In the video below, McCoy and Holl discuss some of the ways in which the complex reflects the larger architectural elements of the campus. 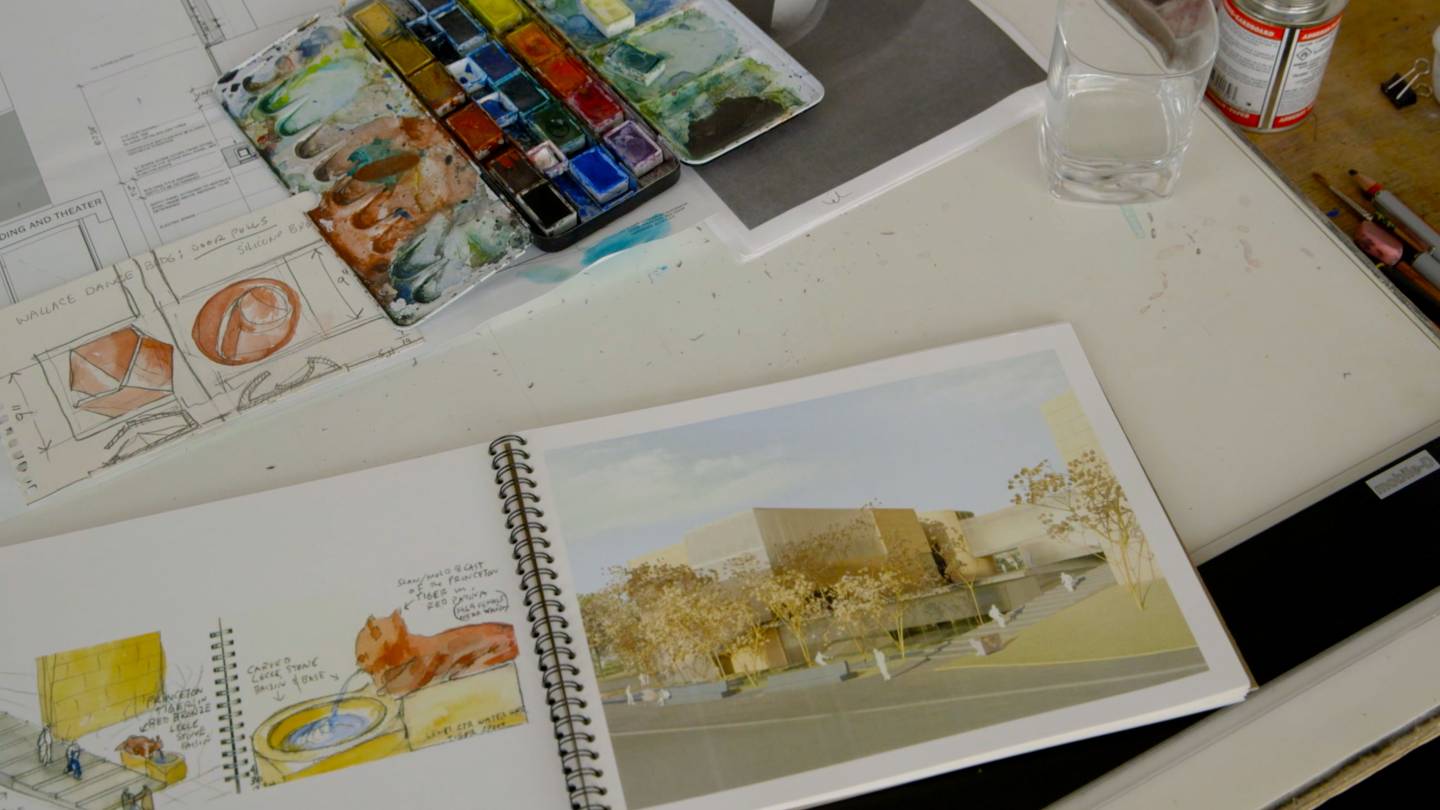 Video by Jon Roemer for the Office of Development Communications

Below are architectural highlights of the complex:

Academic elements: The Lewis Arts complex includes a new home for the Lewis Center for the Arts' programs in dance, music theater and theater, and the Princeton Atelier. The new building for music expands facilities for the Department of Music. The complex also includes a gallery for the Program in Visual Arts. These new facilities supplement other arts spaces on campus and help the University realize its vision of a vibrant campus suffused with the arts.

Location: The Lewis Arts complex, on the south edge of campus, anchors a 22-acre development that includes two restaurants, a Wawa convenience store and the new Princeton train station. The complex is surrounded by a park-like setting with extensive landscaped plazas, pathways and green spaces. It is adjacent to the McCarter Theatre Center. 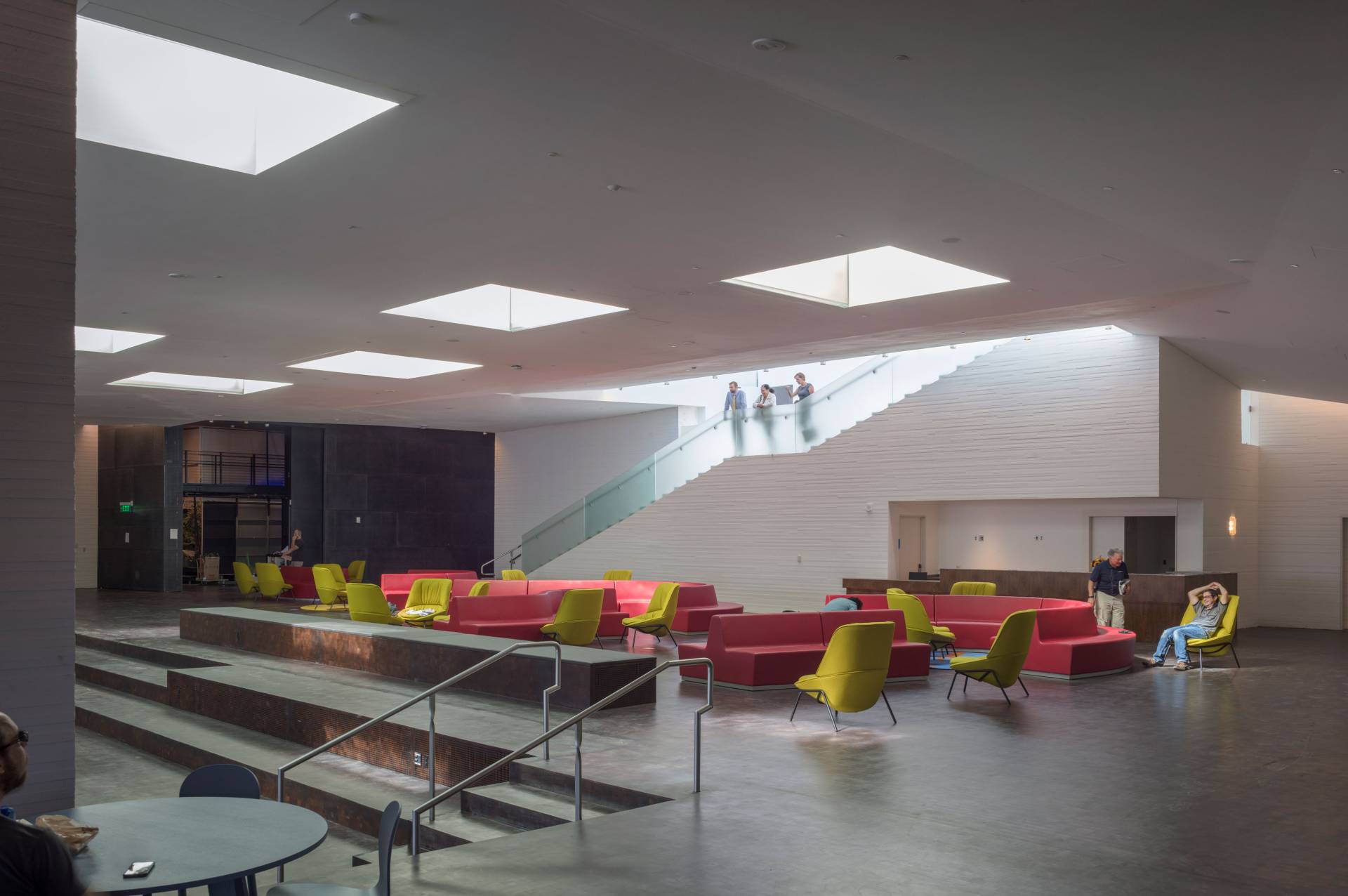 The buildings are connected underground by an 8,000-square-foot open Forum, designed to promote collaboration, community and connectivity. Natural light filters through skylights from the reflecting pool directly above the Forum. On the left is the entrance to the Wallace Theater — a black box theater, finished in perforated black steel, that features state-of-the-art LED theatrical lighting.

The buildings are connected underground by the 8,000 square-foot open Forum below the outdoor plaza. The Forum serves as an indoor gathering space and lobby for the various arts venues in the complex. The outdoor plaza, which features a reflecting pool with skylights that filter natural light into the Forum below, is a gateway space to connect the local community to the University and to invite curiosity and interaction.

Building materials: The steel and cast-in-place concrete structure of the three buildings is faced in thick, 21-million-year-old limestone from a quarry in Lecce, in southern Italy, that has been continuously mined for 2,000 years. If you look at the stone closely, you can see small fossils. 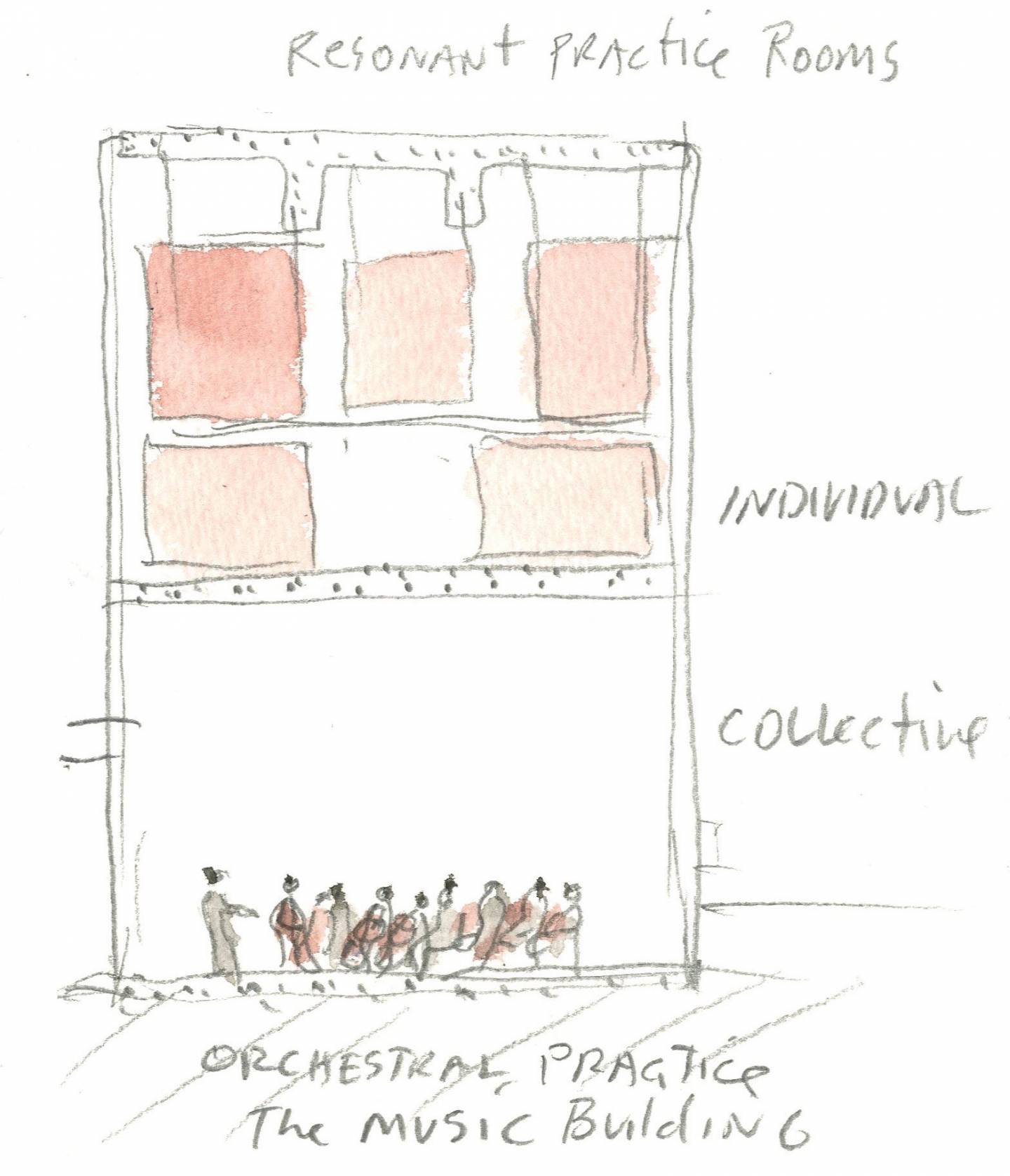 This watercolor rendering illustrates one of the core architectural concepts of the complex: the idea of the individual and the collective. In the New Music Building, for example, students can rehearse in the 17 individual practice rooms — and gather to rehearse or perform in the large ground-level Lee Music Performance and Rehearsal Room.

Trees: Some 490 new trees planted on the arts and transit project, 21 of which are on the Lewis Arts complex site, including several American Beech trees and a variety of oak species. Seventeen existing trees were protected to remain, including a Civil War-era Ohio Buckeye.

Other landscaping highlights: The Arts Plaza, formed between the three main buildings, is a 5,250-square-foot planted pavement green roof over the Forum space. At its center is a 4,500-square-foot reflecting pool with 12 skylights that bring natural light down to the space below. Stone benches are integrated in the stone facades and reflecting pool edge for seating, and bluestone pavers are placed in different densities including open planted joints. The landscape was developed with Michael Van Valkenburgh Associates. A new work by the internationally acclaimed artist Maya Lin has been commissioned for the grounds. Additional details about the commission will be announced later in the fall. 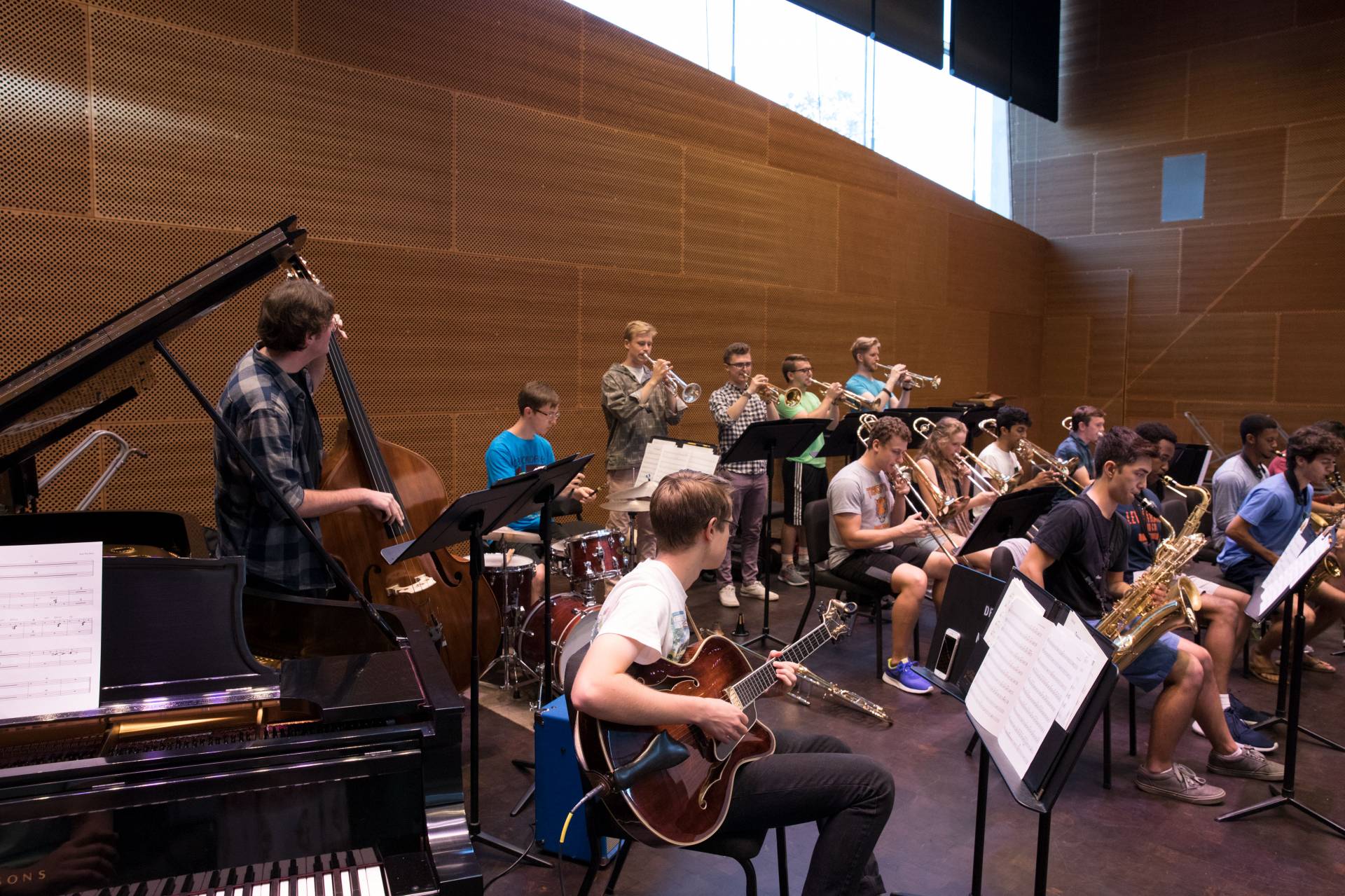 The Creative Large Ensemble, one of Princeton's jazz groups, tunes up for one of its first rehearsals in the Lee Music Performance and Rehearsal Room. 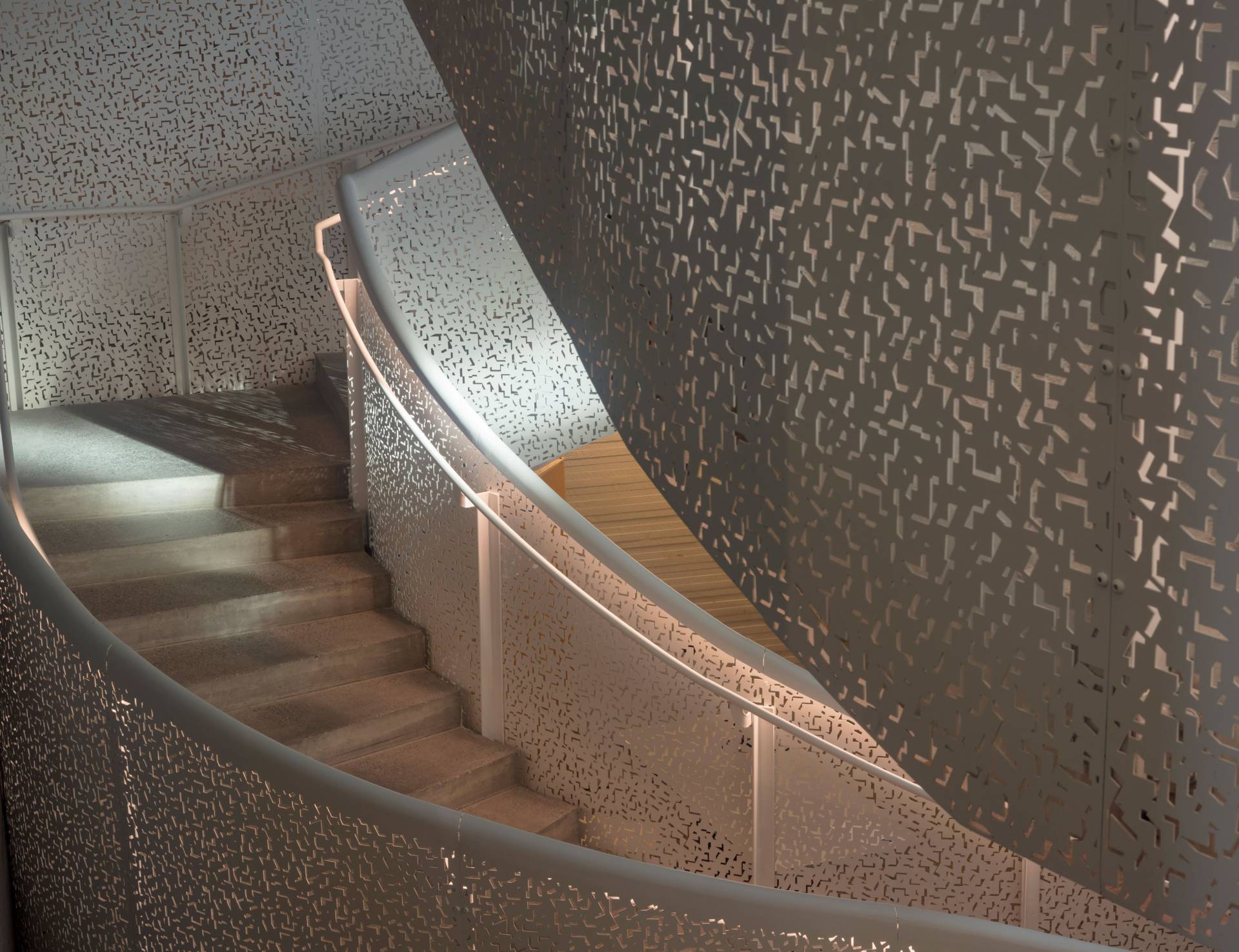 The complex is full of arts-inspired architectural detail. For example, the perforated white metal sides of a "dancing staircase" in the Wallace Dance Building and Theater is inspired by labanotation, a system used by choreographers and others to record human movement 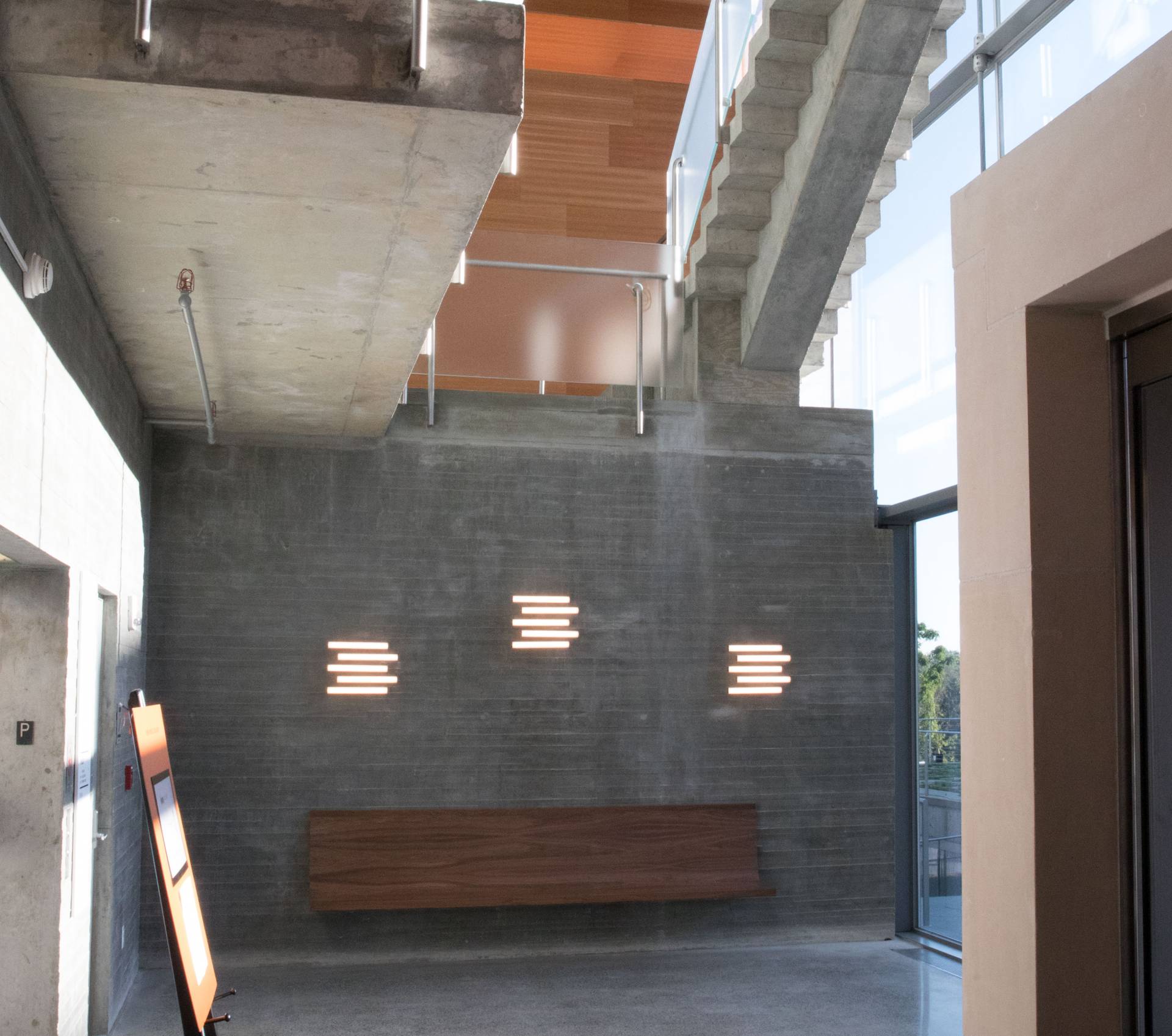 The lighting fixtures — five short horizontal bars — in the lobby of the New Music Building are inspired by the lines on a musical staff.