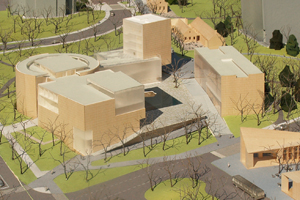 This architect's model of the arts complex shows the Wallace Dance Building and Theater at left. (Image courtesy of Steven Holl Architects)

"We have made great strides in establishing Princeton as a leader in integrating the creative and performing arts into the broader curriculum," said University President Shirley M. Tilghman. "Thanks to the Wallaces' generosity, our students will soon have much-needed spaces in which to pursue their artistic visions, both in rehearsal and performance. I am grateful to Monte and Neil for giving them such a beautiful 'stage' on which to perfect and demonstrate their talents."

The Wallaces said: "We believe that the opportunity to perform an art form can give students a deeper understanding of that art form than can be articulated in words. We are, therefore, pleased to be one of numerous expected contributors to a vibrant performing arts center at Princeton."

After graduating from Princeton, the Wallaces, who both were English majors, earned law degrees from Harvard University. They founded the Boston-based General Investment & Development Cos., a privately held real estate and investment holding firm, in 1959, and spent their careers there.

Both have supported Annual Giving over the years and have been volunteer leaders for the University. Monte served as chair of the $125 million development program for Princeton, which began in 1968 and ended in 1979, and as vice chair of the Council for University Resources, on which they both served as members from 1973 to 1979. During that time they also were major University supporters, and they underwrote the renovation of Moffett Laboratory in 1979-1982.

With a gift during the Anniversary Campaign for Princeton, the brothers created Wallace Hall, home to the Department of Sociology since 2000 and a central location for the social sciences at Princeton.

The 58,000-square-foot, multi-story Wallace Dance Building and Theater will be one of three structures in the arts complex near University Place and Alexander Street designed by architect Steven Holl, a 2012 American Institute of Architects Gold Medalist. The other two are a music building and a building designated primarily to house offices for the Lewis Center for the Arts and the Fellows in the Creative and Performing Arts program. The structures will be part of a larger arts and transit neighborhood that also includes a new train station and a new restaurant and café.

The Regional Planning Board of Princeton is expected to take action on the project's site plan this fall. If approved, infrastructure work could begin in 2013, with groundbreaking in 2014 and completion in 2017.

The Wallace gift is part of Aspire, the University's five-year fundraising campaign that concluded on June 30 after raising $1.88 billion. The campaign included a commitment to the visual and performing arts as an essential element of the Princeton experience.