Princeton University's Arts and Transit Project will reach a major milestone when the new Princeton Station opens Nov. 17, marking the final stages of the transit portion of the project.

As workers prepare for the station opening, NJ TRANSIT train service between Princeton and Princeton Junction will be temporarily replaced by bus service from Monday, Nov. 10, to Sunday, Nov. 16.

With the Arts and Transit Project, the University is redeveloping an area along Alexander Street and University Place to create a complex of three arts buildings, new dining establishments, a new location for the Wawa convenience store next to the new station building, and a modern, multimodal transit hub, along with roadway and landscaping improvements.

An official opening ceremony for Princeton Station will be held on Nov. 25 at 1:15 p.m. 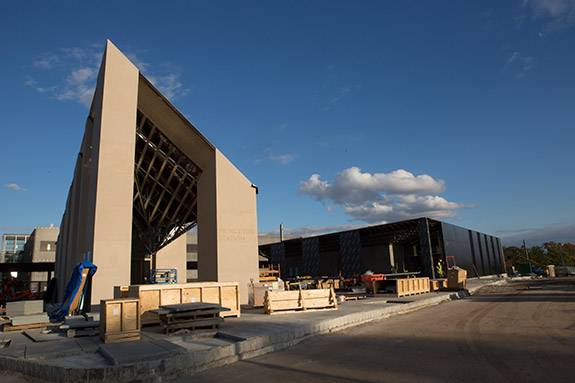 Tucson, Arizona-based Rick Joy Architects designed the new Princeton station and the new Wawa building. Angled concrete pillars and a blackened steel-paneled roof create the station's dramatic shape. The enclosed portion of the station is 1,265 square feet with bluestone flooring. The station will be climate controlled, will have seating and information kiosks, and will open 30 minutes before the first train each day and close 30 minutes after the last train.

There will be canopied platform along the tracks, and ticket vending machines will be located on the platform.

The NJ TRANSIT train known as the Dinky provides service between Princeton and Princeton Junction, which provides connections to rail service along the East Coast. The station is 460 feet south of the former station building on University Place.

The transit plaza includes short-term parking for Wawa patrons and "kiss-and-ride" parking; a drop-off and pickup area for motorists; bike racks; a new bike rental program; bus stops for NJ TRANSIT, the University-operated TigerTransit and the freeB operated by the Town of Princeton; and a taxi stand.

A new road has been constructed leading from Alexander Street to the University's West Garage. The new North Station Drive will have a traffic signal at the intersection with Alexander Street. Access to the parking garage will be restricted to University drivers on weekdays from 5 a.m. to 5 p.m. and open to the public in the evenings and on weekends. 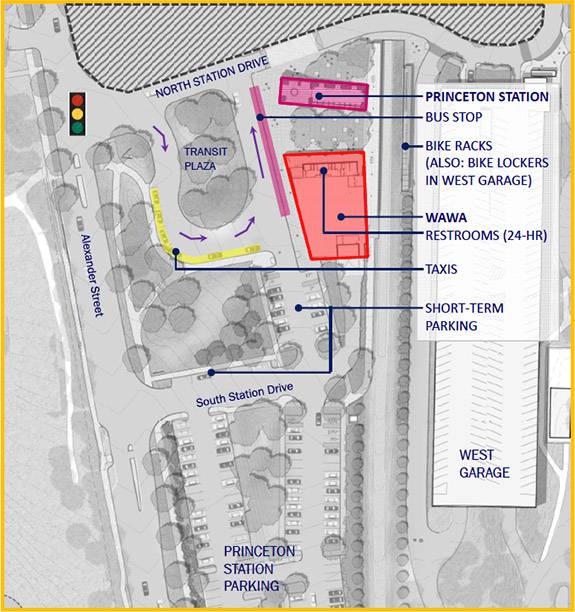 The multimodal transit plaza includes amenities for bikes, buses, cars and trains, as well as links to pedestrian paths. (Image by Kate Jones, Office of Design and Construction)

The Wawa, which will open Nov. 21 without an interruption in service, will be open 24 hours a day and will have public restrooms. A planted "green roof" tops the building, which has an exterior of blackened steel panels and one concrete wall.

Maps showing new services and routes around the plaza — for pedestrians, vehicles and mass transit — are on the Arts and Transit Project website.

When the Dinky stops running from Monday, Nov. 10 to Sunday, Nov. 16, bus service will be provided by NJ TRANSIT and the University's TigerPAWW shuttle. The TigerPaWW shuttle program will end with the opening of the new station.

Construction on the project began in spring 2013. In August 2013, the new parking lot and a temporary train station opened. In February, a new roundabout opened at the intersection of Alexander Street and University Place.

Dining and arts buildings in progress

Over the next few years, construction will continue on the dining and arts buildings that are joining the other arts buildings in the area, including McCarter Theatre Center and creative writing and dance spaces in the New South building.

The café and restaurant, to be operated by the Terra Momo Restaurant Group and also designed by Rick Joy Architects, will focus on serving locally grown and produced fare. The eateries will be located in the former train station buildings.

In summer 2015, a 54-seat pizzeria-style café will open in the former north station building, serving breakfast, lunch and dinner as well as wine and beer.

In fall 2016, the restaurant will open in the south station building formerly used for baggage handling. Terra Momo has proposed a farm-to-table restaurant serving lunch and dinner, with seating for 116 patrons inside and 60 outside. The University will expand the building before Terra Momo begins interior renovations.

In time for the 2017 fall semester, the three arts buildings will open. The site will house the Lewis Center for the Arts' administrative offices, a gallery, the Wallace Dance Building and Theater, practice rooms for music students, a garden and an arts plaza. Construction crews are currently working on the building's concrete foundations and structure, and geothermal well drilling.