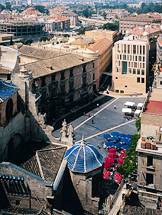 The Murcia Town Hall, at the far end of the plaza in this photo, represented a contextual challenge for Spanish architect José Rafael Moneo, whose firm has been selected to design Princeton's new neuroscience and psychology buildings. The city's most public place was defined by an imposing 16th-century cathedral on the east (foreground) and the quieter cardinal's palace dating from 1768 on the south (at left). Moneo's solution was to create a building "content in its role as spectator, without seeking the status of protagonist" held by the cathedral and the palace. It was completed in 1998.

Below left: Moneo designed the Kursaal Auditorium and Congress Center in San Sebastián to reflect the area's geography, which encompasses hills, beaches and capes. The outside of the building uses panels of curved glass that turn the façade into a dazzling source of light at night. The cultural complex, which houses an auditorium, chamber music hall, exhibition halls, meeting rooms, offices, a restaurant and musicians' services, was completed in 1999.

Moneo, who is known for integrating contemporary architecture into rich physical contexts, has taught architecture as well as practiced it. He was chair of the Department of Architecture at Harvard University from 1985 to 1990 and currently lectures there as the first Josep Lluis Sert Professor of Architecture.

He has taught at a number of other institutions including Princeton, where he served as a visiting professor in 1982.

"It is with great pleasure that I return to the Princeton University campus for the design of the buildings for neuroscience and psychology -- a project that aims to redefine science in the 21st century," Moneo said. "I look forward to our close collaboration with the University and the departments to design buildings that will merge the strict requirements of research with the demanding complexities of the site."

The two buildings will be located south of the Icahn Laboratory and will be part of a natural sciences neighborhood the University is creating in the area south of Ivy Lane that straddles Washington Road. One will house the Department of Psychology, which will move from Green Hall farther north on Washington Road. The other will house the new neuroscience institute, announced in fall 2005, which will bridge many disciplines, including psychology, and take an innovative approach to studying the brain and nervous system. The buildings will be in close proximity and will be connected by shared space.

"Moneo is very thoughtful and analytical in his approach as an architect, and that's a nice fit for the buildings' uses," said Princeton Executive Vice President Mark Burstein. "He's an architect whose strength is in understanding the context of a site and designing structures to be successful within that context."

Burstein noted that one of the challenges of the project will be to design buildings for two academic units that want to maintain separate identities yet foster cross-disciplinary work. The two structures will be built on a site that borders a natural area. A sustainable design strategy will be key, he said.

The buildings represent Moneo's first work at Princeton, which in the last four years has selected several noted architects and their firms for construction projects, including: Frank Gehry for the Lewis Library to be completed in 2007; Demetri Porphyrios for Whitman College, also to be completed in 2007; Frederick Fisher and Partners for a new building for the Department of Operations Research and Financial Engineering, a one-year project expected to begin in 2007; Pei Cobb Freed & Partners for the reconstructed Butler College, set to begin in 2007 and be finished in 2009; Hopkins Architects for the chemistry building, slated to be started in 2007 and finished in 2010; and Renzo Piano Building Workshop for an arts neighborhood design at the intersection of University Place and Alexander Street, for which preliminary plans will be unveiled this fall. 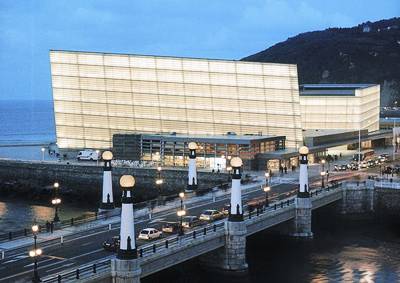 Moneo, who established his firm in Madrid in 1965, is considered one of the most important figures in Spanish architecture. In 1992, he received the Spanish government's highest honor, the Gold Medal for Achievement in Fine Arts. In 1996, he earned both the International Union of Architects Gold Medal and the Pritzker Architecture Prize. The citation for the former noted his great success in "creating a balance between tradition and innovation."

In Spain, his projects include the Bankinter Building in Madrid, the Museum of Roman Art in Mérida, the L'Illa building in Barcelona, the Pilar and Joan Miró Museum in Palma de Mallorca, the town hall in Murcia, the Kursaal Auditorium and Congress Center in San Sebastián and the extension of the Prado Museum in Madrid.

In the United States, Moneo has designed the Davis Museum and Cultural Center at Wellesley College, the Houston Museum of Fine Arts, the Cathedral of Our Lady of the Angels in Los Angeles and the Laboratory for Integrated Science and Engineering under construction at Harvard University.

Moneo will work on the Princeton project with Davis Brody Bond, a New York City firm with extensive science experience. The two currently are collaborating on a science building at Columbia University.

The buildings should encompass about 200,000 gross square feet and consist of multiple stories, according to Mark Wilson, program manager in Princeton's Office of Design and Construction. They will incorporate classrooms, laboratories, offices, meeting rooms and some specialty spaces, such as a place to house the University's functional magnetic resonance imaging (fMRI) scanner.

The buildings will be the focus over the next several years of fund-raising efforts, which will determine the construction schedule. The project site currently serves as a parking lot. Spaces for those vehicles will be created elsewhere on campus as part of the University's overall campus planning initiative.

The science neighborhood will include Fine, McDonnell, Jadwin and Peyton halls and the new Lewis Library and chemistry building on the east side of Washington Road and Thomas, Schultz, Moffett and Icahn labs, Eno and Guyot halls and the new neuroscience and psychology buildings on the west side. The two halves will be connected by a pedestrian bridge being designed by noted Swiss engineer Christian Menn in collaboration with HNTB, a New York-based architectural firm.