Construction will start in late March on Princeton University's new Neuroscience and Psychology Buildings to be located south of Icahn Laboratory and west of Washington Road.

The complex has been in development for several years and was part of the Campus Plan unveiled in 2008. Now that the University has raised sufficient funds, the project, which has been on hold, can move ahead while further fundraising continues. The construction cost is estimated at $180 million.

This image shows the east side of the Neuroscience and Psychology Buildings as they will look from Washington Road. The outer walls, composed of two "skins" of glass with a three-foot-wide airspace sandwiched between them, will have a luminous quality and will be energy-efficient. (Image: Princeton University)Images for news media

"Thanks to generous support from our loyal alumni, the University will start construction of the Neuroscience and Psychology Buildings immediately," said Executive Vice President Mark Burstein. "This complex provides critical space for these two connected research and teaching endeavors in carefully designed structures that will add to the design quality of our campus and meet our sustainability goals. We are very pleased to be able to fund this essential project in light of present economic conditions."

The two-building complex will house the interdisciplinary Princeton Neuroscience Institute, which has been located in the Thomas and Moffett laboratories near the south end of campus since it was established in 2005, and the Department of Psychology, currently located farther north on Washington Road in Green Hall, which was built in 1927. Construction on the new facility is expected to be completed three years from the start date.

The Princeton Neuroscience Institute draws most of its faculty members from the departments of molecular biology and psychology, and also attracts researchers from chemistry, computer science, ecology and evolutionary biology, electrical engineering, mathematics, mechanical and aerospace engineering, operations research and financial engineering, and physics. The institute -- with its interdisciplinary emphasis and theoretical and computational strengths -- takes a distinctively different approach to the study of neuroscience than most such programs.

Princeton President Shirley M. Tilghman has said that having a first-class program and facilities in neuroscience is critical to Princeton maintaining its stature among the leading institutions in the world. "We cannot be a great university in this century without a major presence in neuroscience," she said. "Neuroscience will be as important in the 21st century as physics was in the early 20th century and molecular biology was in the late 20th century."

The contemporary structures have been sited to take advantage of the landscape, with two of the psychology building's five stories nestled into the ground on the north side emerging to ground level on the south side. The neuroscience portion of the complex, which is on the west portion of the site, will have two above-grade stories. There will be many areas of shared space between the two, especially on the A and B/C levels below grade throughout both buildings. 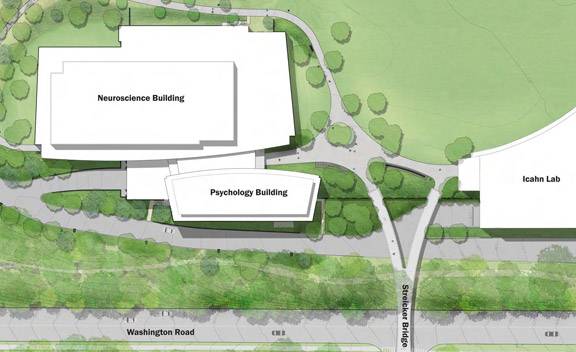 This site plan shows the location of the complex south of Icahn Laboratory and west of Washington Road, with the main entrance on the north side. The buildings' placement follows the ellipse around Poe and Pardee fields. (Image: Princeton University)

The main entrance to the complex will be on its north side off a path leading from the Icahn Laboratory and from the Streicker Bridge, the pedestrian walkway over Washington Road that will open this fall when the new Chemistry Building opens across the street. The complex will be the southwest cornerstone of the University's "natural sciences neighborhood," which includes Fine, McDonnell, Jadwin and Peyton halls, Lewis Library and the new Chemistry Building on the east side of Washington Road, and Thomas, Schultz, Moffett and Icahn labs, and Eno and Guyot halls on the west side. The buildings' placement follows the ellipse around Poe and Pardee fields that begins with Bloomberg Hall near Elm Drive.

The first-floor entrance will open to a glass-walled lobby and a central stairway leading to the common areas below. On the south end, doors will open to a terrace with a plaza below on the A level. On level two, a bridge-like corridor will connect the two sides of the complex.

On the first and second floors of the neuroscience side of the complex, faculty offices and study spaces will line the windowed perimeter, and laboratories will form the central core. On the psychology side of the complex, faculty and administrative offices again will take up the perimeter space on each floor as well as data labs, with precept rooms, conference rooms and student spaces filling in the center.

This design maximizes natural light, with interior skylight shafts that penetrate almost to the basement and external walls of opaque glass bisected by clear ribbons of "vision glass." The nonconnecting walls of the two structures will have a luminous quality. They will be composed of two "skins" of glass with a three-foot-wide airspace sandwiched between them. The outer skin is a ribbed "glass curtain" that serves as a sunscreen, and the inner skin is a smooth weather barrier of high-performance glass. The insulating space between them is open at each end to allow air to circulate.

Sustainability elements are a major focus of the architectural design, which is intended to meet the equivalent of the U.S. Green Building Council's Leadership in Energy and Environmental Design (LEED) Silver standards. Features will include the use of low volatile organic compound (VOC) materials and natural lighting wherever possible. Stormwater will be collected in a 12,000-gallon cistern for nonpotable use; the high-performance exterior and enhanced heat recovery for mechanical systems will reduce energy needs; and low-flow plumbing fixtures will help to conserve water.

One flight down from the main entrance, the A level will contain a common space with an outside plaza, teaching spaces that include a 140-seat lecture hall and several classrooms and seminar rooms, and a central core of faculty labs. The common area and teaching spaces will be shared with the psychology building. The A level will be connected by tunnel with Icahn Laboratory.

This rendering views the new complex on the right from Poe and Pardee fields. Icahn Laboratory is on the left, and the new Chemistry Building is visible in the distance between the two across Streicker Bridge. (Image: Princeton University)

Because imaging and microscopy areas must be in contact with the ground (due to vibrations and electromagnetic field restrictions), the lowest level (B/C) is reserved for the building's unique joint-use facilities. Advanced instrumentation for measuring brain structure and activity from the cellular to the systems level will be shared between neuroscience and psychology faculty and open to researchers from other University departments, as well as outside scholars. The facilities are expected to include laboratories for magnetoencephalography (MEG), to measure magnetic fields generated by neural currents; human electrophysiology and electroencephalography (EEG), to measure electrical activity in the brain; transcranial magnetic stimulation (TMS), to stimulate or suppress brain activity with focused magnetic pulses; two-photon laser scanning microscopy (TPLSM), to measure brain activity at the level of individual neurons; connectomics, instrumentation for determining the wiring diagram of neuronal networks in the brain; and three separate suites for functional magnetic resonance imaging (fMRI).

The complex will be constructed on the site of a 350-space parking lot (Lot 20) used by faculty and staff. They have been notified to park in either Lot 21 near Jadwin Gymnasium or in the West Garage during the first phase of construction through June 11 and to ride TigerTransit buses. During the summer months beginning June 12, they also may park in the University parking lots along Ivy Lane. New parking plans will be developed for fall 2010 and for after the completion of the project, when a new 57-space lot will be constructed south of the complex.

The new lot will be constructed of a porous paving material, decreasing the amount of impervious surface in the area to meet campus goals for stormwater reduction. Plants that are drought resistant and will provide biofiltration for stormwater also will be established around the new building.

Once vacated by the Department of Psychology, Green Hall eventually is slated to be converted into space for the humanities or social sciences. Thomas, Schultz and Moffett laboratories will remain the home of the Department of Molecular Biology.