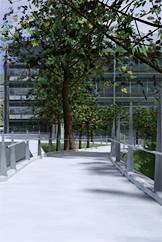 At left: This bird's-eye view of the chemistry building from the northwest shows the side of the building housing offices in front, the atrium in the middle and the portion with laboratory and teaching spaces behind. The main entrance to the building will be on the left, where a new plaza will be created. (Image courtesy of Hopkins Architects)

Below Left: The new pedestrian bridge will link two halves of the science neighborhood. The span will reach across Washington Road from the Icahn Lab to the new plaza near the chemistry building and Jadwin Hall. (Image courtesy of HNTB)

Plans are progressing on schedule to transform the part of Princeton's campus that straddles Washington Road south of Ivy Lane into a natural sciences neighborhood, highlighted by a new chemistry building and a pedestrian bridge over Washington Road.

The projects have been presented to University trustees and submitted to the regional planning board, and will proceed into the next phase of design development after site plan approval.

The chemistry building is being designed by Hopkins Architects, a London-based firm that has earned numerous awards for its work in the United Kingdom. The company, known for its innovative approach to construction and its energy-efficient designs, is collaborating with Payette Associates, a prominent architecture firm based in Boston that has done previous work on the Princeton campus.

The pedestrian bridge is being designed by noted Swiss engineer Christian Menn in collaboration with HNTB, a New York-based architectural firm. The project will help connect two halves of the science neighborhood by linking the new chemistry building, Fine, McDonnell, Jadwin and Peyton halls and the Frank Gehry-designed Lewis Library, which will be completed in 2007, on the east side of the road with Thomas, Schultz, Moffett and Icahn labs and Eno and Guyot halls on the west side. 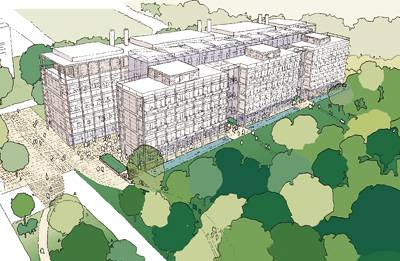 The four-story chemistry building will encompass between 240,000 and 250,000 gross square feet and will be located on the site of the Armory south of Jadwin Hall. Current designs call for laboratory and teaching spaces on the east side of the building and offices on the west side of the building facing Washington Road. The two sides will be joined by a skylit atrium that will feature pedestrian connectors at three levels and public meeting spaces. The building will be clad primarily in glass and stone panels set in a structural framework.

The plans are being developed under the University's new Sustainable Building Guidelines that provide parameters for issues such as energy management and environmental impact. The footprint of the building will be smaller than the area occupied by the Armory and its surrounding parking. The new structure will be set to the east edge of the site near Weaver Track, in order to maximize the development of a wooded landscape between the building and Washington Road. Plans call for creating a nature walk and for restoring the existing stream valley as a way to sustainably handle storm water runoff through bio-filtration.

"The new chemistry building and pedestrian bridge will be significant additions to our campus while creating state-of-the-art research facilities for the chemistry department," said Mark Burstein, Princeton's executive vice president. "The research building, thanks to the hard work of Hopkins Architects, will place the University's highest users of energy into our most sustainably designed building. This project also will test a new method of managing our storm water in a more environmentally beneficial fashion."

In addition to bio-filtration of storm water, some of the measures in the design for the chemistry building include high-efficiency fume hoods, heat recovery systems and even possibly a rain water retention system for use in flushing toilets.

The chemistry department will be moving from its current home farther north on Washington Road in the 77-year-old Frick Lab, one of the oldest functioning chemistry facilities at an academic institution in the United States. The new building will enable the department to better integrate its teaching and research programs as well as to develop collaborations with physics, molecular biology, genomics and other science departments that will be located nearby.

"Moving the entire chemistry department into a newly constructed building is an extremely unusual thing to be doing as an institution," Burstein said. "Most institutions add on and renovate. The University is making a very significant investment in chemistry teaching and research through the construction of this building and the accompanying faculty recruitments and equipment purchases."

Mike Taylor, a director at Hopkins Architects who is managing the Princeton project, said that a key goal of the project is to convey the importance of this discipline within the University, especially since the site is located at a gateway to the campus.

"As you come up Washington Road, this structure becomes very important as the first building you see as you enter the environs of the campus," Taylor said. "We wanted to make a building that will be a center of world excellence for chemistry, that will be state of the science for that particular discipline. And we wanted very much to put the chemistry on show so that it would inspire people coming into the building and inform them as to what goes on in there -- it should feel like a workshop, a place where you can see what people are working on. We felt very much that the building could transmit the energy and the excitement of the research that goes on in the laboratories."

According to James Wallace, project manager in Princeton's Office of Design and Construction, the building's east side will house teaching labs on the ground level and research labs on the three levels above. The west side will be home to faculty and administrative offices and meeting spaces, such as conference rooms. Each office will have a view to the outside, while the conference rooms will overlook the atrium on the interior. The offices will be located in three interconnecting "pods." The spaces between the pods have been designated as "interaction zones," with furniture and fixtures conducive to informal gatherings.

The atrium will extend through the building, connecting all floors. The lower level will feature a 250-seat auditorium and also include lab equipment and supplies. Some of the areas housing lab equipment will have glass ceilings, allowing those in the atrium above to observe ongoing work.

Taylor said that another goal of the design is to create relationships between the internal and external environments.

"We have a lot of transparency from the central atrium space that will benefit the occupants not only in increasing communication between researchers but also in providing very pleasant views to the natural landscape," he said.

The main entrance to the building will be on the north side, where a new plaza will be created. The plaza will extend on the east to Princeton Stadium and on the north to Jadwin Hall, where the loading dock will be reconfigured and a new entrance on the A level will be constructed. This entry will connect through interior spaces to McDonnell Hall's Brush Gallery and the Lewis Library.

On the west, the plaza will flow into the new pedestrian bridge that will be built over Washington Road. 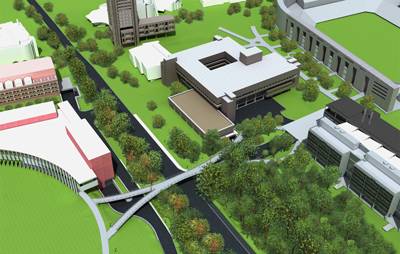 In addition to connecting the science neighborhood, the bridge will ease the flow of pedestrian traffic and create a safer and more convenient way to cross the street. Student-athletes and spectators often travel that route to get from locker rooms and parking lots to athletic venues.

Menn is collaborating on the design with Ted Zoli, a vice president of HNTB and a 1988 Princeton alumnus who also is a visiting lecturer in Princeton's Department of Civil and Environmental Engineering. Their current design incorporates three arches -- one of which is a slender weathering steel "pipe arch" under the span with elements that branch out to support the walkways. The other two structured arches, made of concrete, converge to form the pedestrian walkways, which will be wheelchair accessible.

"The bridge has been designed for its presence at road level," said Wallace, who also is managing this project. "It will look very elegant from that view, with aspects of a gateway to the campus and the community set within the wooded landscape."

Access points to the bridge on the west side of Washington Road will begin at the Icahn Lab and on the path from parking lot 20. Access points on the east will be at Jadwin Hall and the chemistry building. The design for the landing area on the east has evolved since the initial concept to incorporate gradually sloped paths leading to the new plaza.

The 300-foot span will rise 20 feet above Washington Road at its highest point. The walkways are expected to be at least 10 feet wide and will have stainless steel mesh railings.