Drivers making their way north on Washington Road from Faculty Road travel under a canopy of trees before emerging into the more developed area of Princeton's campus.

The concept for the new pedestrian bridge at that location, spanning the road between the Icahn Laboratory and Jadwin Hall, carries the arborescent theme a bit further.

The current design by renowned Swiss engineer Christian Menn calls for a span with three arches -- one of which is a slender metal "pipe arch" with elements that branch out like a tree to support the walkways.

"The bridge will be a welcoming gesture that complements the experience of driving through the trees," said Jon Hlafter, University architect. 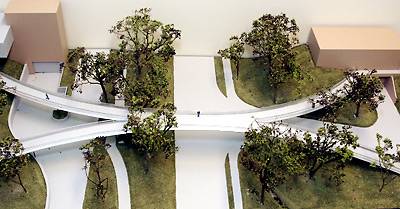 This model shows the two concrete arches converging to form the pedestrian walkways over Washington Road south of the Icahn Lab (at left) and Jadwin Hall (at right).

The other two structured arches, made of concrete, converge to form the pedestrian walkways over the road. "What is special about the pedestrian bridge is that it's a very innovative way of using the pedestrian walkway as an integral part of the structure itself," said Ted Zoli, a vice president of the New York engineering firm HNTB and a 1988 Princeton alumnus who is collaborating with Menn on this project. "Because the walkways change quite a bit in grade, they actually act as arches leaning against each other. The third arch, the pipe arch, is therefore as elegant and efficient in terms of structure as possible."

Although it's early in the process, Menn's concept has those involved excited about the project. "His work epitomizes the view that the engineering of bridges can be an art," Hlafter said.

The University has decided to build the bridge over Washington Road to ease the flow of pedestrian traffic in that area. With the recent construction of the Icahn Lab and the pending construction of a new chemistry building on the site of the Armory, a safer and more convenient way to cross the street was sought. The new bridge, which will be wheelchair accessible, will be the most direct connection between the two sides high above the roadway, Hlafter said.

The project is part of an effort to consolidate a "science neighborhood" in the area that would incorporate the new chemistry building, Fine, McDonnell, Jadwin and Peyton halls and the Frank Gehry-designed Lewis Library, which will be completed in 2007, on the east side of the road as well as the Lewis Thomas, Schultz, Moffett and Icahn labs and Eno and Guyot halls on the west side.

Under the current concept, access points to the bridge on the west side of Washington Road will begin at the Icahn Lab and on the path from parking lot 20. Access points on the east will be at Jadwin Hall and the new chemistry building. Hlafter expects that the bridge will be used not only by those connected with the science complex, but also by student-athletes traveling to athletic sites east of Washington Road or from locker rooms in Caldwell Fieldhouse to athletic venues such as 1952 Field and by spectators walking from the parking lot to Jadwin Gym or Princeton Stadium.

Hlafter said that the final design of the bridge is dependent on the design of the chemistry building, for which an architect soon will be named. Construction on the building is expected to begin in two or three years and to be completed in five years.

In addition to connecting the two sides of the road, the bridge will have a symbolic role as a gateway to the campus and the community. "The arch, in some ways, represents the strongest sort of gateway you could have," Zoli said.

From afar, the bridge will appear "almost floating," he said. Only as one gets closer will the slender pipe arch appear and represent the gateway. "There's a subtlety about it, but there's also something fascinating about the structural element being absolutely as efficient as possible," Zoli said. 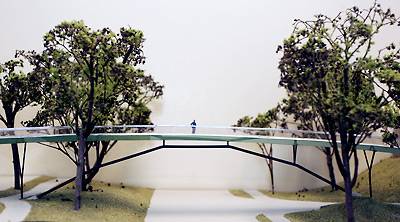 The slender metal "pipe arch" is designed to represent a gateway into the campus and the community.

Under the current concept, the 300-foot span will rise 30 feet above Washington Road at its highest point. "It will feel, especially in the summer when the trees are in leaf, like you're walking in the trees," Hlafter said. "We think that it's going to be a very pleasant experience."

The walkways are expected to be at least 12 feet wide and will have structural glass railings, he said, "one of the details that makes the bridge look especially light and graceful."

Menn has devoted his life to teaching engineers about the design of bridges as well as designing his own bridges. He taught structural engineering at the Swiss Federal Institute of Technology for many years, and since 1959 has designed some 15 bridges, constructed primarily in Switzerland. He is renowned for his exploration of the technical and aesthetic possibilities of prestressed concrete and other materials.

Menn has completed one project in the United States: the 10-lane Leonard P. Zakim Bunker Hill Bridge completed in Boston in 2002. Zoli served as lead engineer for the sleek, cable-stayed bridge for vehicular traffic. Zoli said that their relationship will work much the same on the Princeton project, with Menn developing the conceptual design and the two collaborating on the final design.

"Most of Dr. Menn's projects have been for vehicular bridges on a much larger scale," said Zoli, who also is a visiting lecturer in Princeton's Department of Civil and Environmental Engineering. "I think he's captured the elegance that he has in his other structures at the pedestrian scale. That to me is remarkable about his solution."