Infused with reflections and light, two new buildings on campus are helping to expand Princeton University's study into the recesses of the mind.

After three and a half years, construction is nearly complete on the two linked buildings for the Princeton Neuroscience Institute (PNI) and Peretsman-Scully Hall, the new home of the psychology department, with move-in to be completed in January. Designed by architect José Rafael Moneo of Madrid in collaboration with Davis Brody Bond of New York City, the 248,000-square-foot complex includes classrooms, laboratories, office space and common areas. The project site, formerly a parking lot, is on the west side of Washington Road, across the street from Frick Chemistry Laboratory. 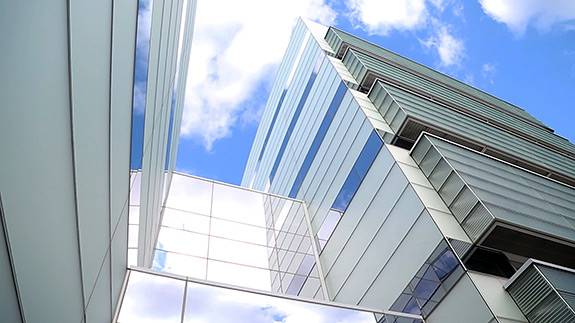 The complex's façade is composed of two types of glass — artisanal glass (right) and high-performance glass (left and center) — that work together to control sunlight and temperature and to limit energy use. (Video still courtesy of Danielle Alio, Office of Communications)

Moneo said the location and the complex's multiple roles — serving two academic units, connecting various science buildings, sitting at the end of the ellipse created by other buildings and fields in the area, bridging the lower section of Washington Road and the elevated Streicker Bridge for pedestrians — all factored into his design.

"On the one hand, it's belonging to campus, and yet it's very much like a private house for researchers and students," Moneo said. The goals, he said, were based on "giving the campus continuity but trying to provide the right atmosphere for working in such an exciting subject." 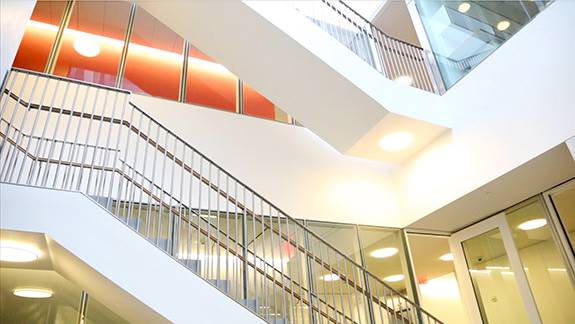 The main entrance, on the north side of the complex, leads to the two-story atrium connecting the two buildings. Complementing modern white or red walls and metal accents, finishes include serrated white oak paneling that echo the serrated glass and bluestone floors. The finishes, which are carried through the faculty and student spaces, Moneo said, were meant to be familiar, "even domestic," to match the close relationship between faculty and students and to make the spaces feel more personal. 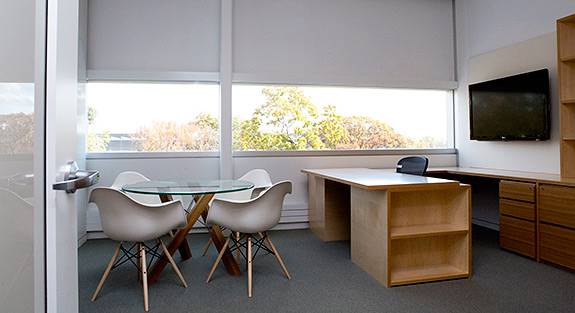 Faculty offices include work and meeting space, large windows, and furniture designed by the architect. (Photo by Denise Applewhite, Office of Communications)

Moneo's design brings light into the building through the glass façade that carries it into offices and into hallways through glass doors, and via large, open stairwells. "Light plays a very important role," he said. The light and openness of the building is meant to enhance the value of community for the building's users, he said.

"This is a deeply felt understanding of some timeless conditions of form, material and, particularly, light," McCoy said. "Those conditions of intimacy and variety are characteristics of the campus that have been with us since the 19th century, and this is just a modern interpretation of some of the conditions."

The psychology and neuroscience units share a 147-seat auditorium with serrated white oak paneling and custom seats made in Italy. (Photo by Denise Applewhite, Office of Communications)

The complex is intended to meet LEED Silver standards under the Leadership in Energy and Environmental Design rating system developed by the U.S. Green Building Council. Conservation features include:

The Princeton Neuroscience Institute now has a variety of state-of-the-art laboratories. (Video still courtesy of Danielle Alio, Office of Communications)

Tasked with the project's landscaping, Michael Van Valkenburgh Associates' plan includes a pedestrian plaza linking the complex to athletic fields to the west, Streicker Bridge to the east and Icahn Laboratory to the north, as well as a continuation of the naturalistic woodland of Lake Carnegie and the Washington Road stream valley to the south.

The complex completes the natural sciences neighborhood outlined in the University's Campus Plan. The psychology and neuroscience units are now in close proximity to researchers in astrophysical sciences, chemistry, ecology and evolutionary biology, geosciences, mathematics, molecular biology and physics. A tunnel connects Peretsman-Scully Hall to Icahn Laboratory. In addition, the complex marks the western endpoint of Tilghman Walk, which connects the sciences neighborhood with the arts neighborhood under construction on Alexander Street.

PNI faculty, staff and students are moving from a variety of spaces — Green and Guyot halls, and Icahn, Thomas, Moffett and Schultz laboratories. The Department of Psychology is relocating from Green Hall.

In total, the complex has office and lab space for up to 50 faculty members, 30 departmental staff, and 250 to 300 graduate students, postdoctoral fellows and research staff. Teaching spaces include a 147-seat auditorium; teaching labs that accommodate 25 students; and two classrooms with 30 and 40 seats, respectively; and a 20-seat computer room. Shared spaces include a study hall with an adjacent outdoor patio, lounges, kitchenettes and conference rooms.

Said Cohen, "Princeton is fully dedicated to being at the forefront of this field, both in its teaching and research missions. Being in closer proximity to other major science buildings on campus, including physics, chemistry and, of course psychology, genomics and molecular biology should greatly help facilitate collaborations — both existing ones and the creation of new ones."

Tank said that the PNI facility represents a milestone in the continuing development of neuroscience teaching and research at Princeton. 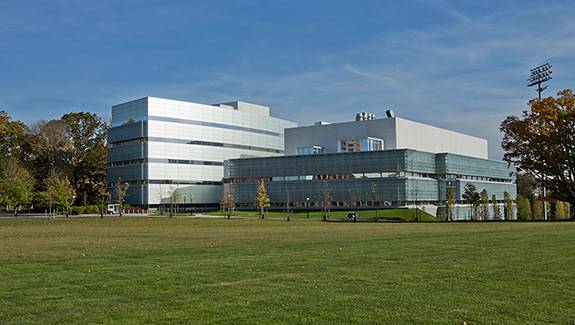 Peretsman-Scully Hall (left), the future home of the psychology department, and the Princeton Neuroscience Institute (right), join the sciences neighborhood outlined in the University's Campus Plan. (Photo by Denise Applewhite, Office of Communications)

"For the first time, neuroscience faculty, students and postdocs will be together under one roof, with state-of-the-art teaching labs and research facilities," Tank said. "It will be home to our growing undergraduate neuroscience certificate program and our recently established Ph.D. graduate program."

Peretsman-Scully Hall is named after Princeton alumni Nancy Peretsman and Robert Scully, who made a $20 million gift to the University in 2012 to support the project.

The complex indicates the University's support of the department and its vision for how the study of the mind fits into the greater scientific community at Princeton, she said.

"The decision to build buildings for both psychology and neuroscience in the same complex — a decision taken under the difficult financial circumstances of the economic downturn — spoke volumes about the administration's commitment to an integrated science of mind, brain and behavior," she said. "That commitment has been critical to our success."

View the online media kit for additional information and images.