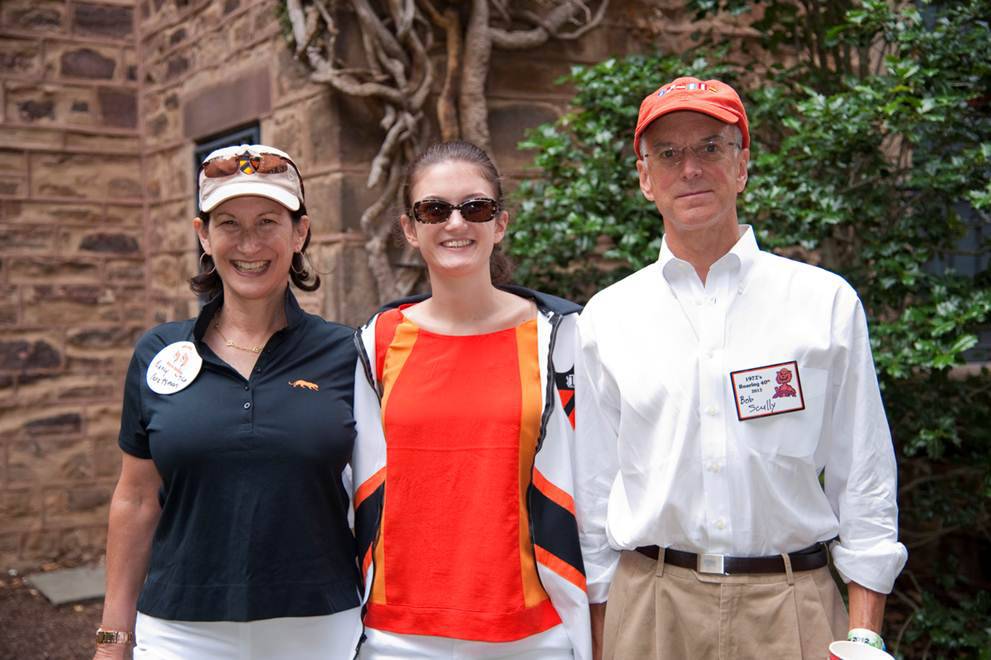 Princeton alumni Nancy Peretsman and Robert Scully, who attended Reunions with their daughter Emma Scully of the Class of 2012 this past June, are contributing $20 million for the psychology building under construction on campus. (Photo by Jon Crispin)

A $20 million gift from Princeton University alumni Nancy Peretsman and Robert Scully of New York City has named the psychology building under construction on the south edge of the campus.

Peretsman-Scully Hall is part of a two-building, 248,000-gross-square-foot complex south of Icahn Laboratory and west of Washington Road that also houses the Princeton Neuroscience Institute. Designed by José Rafael Moneo Vallés Arquitecto of Madrid, the three-year project is expected to be completed in spring 2013.

Peretsman is a University trustee and was co-chair of Princeton's Aspire campaign, which concluded on June 30 after raising $1.88 billion.

"This is a splendid addition to our campus and to its natural sciences neighborhood," said University President Shirley M. Tilghman. "Thanks to Nancy and Bob's extraordinary generosity, our pioneering faculty in the Department of Psychology and the Princeton Neuroscience Institute will have an opportunity to work in close proximity, yielding new scope for scholarly collaboration and the cross-pollination of ideas.

"Peretsman-Scully Hall is an eloquent expression of Nancy's commitment to the Aspire campaign," Tilghman continued. "Her work as co-chair over the past seven years has been critical to the campaign's success, and now she and Bob have given an enormous boost to one of its core priorities. I am deeply grateful to them both."

Peretsman, in her 21st year as a trustee, said, "It is a privilege for us to support the work of Princeton's distinguished researchers and faculty members, and to contribute to the campaign's goal of strengthening the University's position at the forefront of this critical field."

Peretsman, who earned an A.B. in the University's Woodrow Wilson School of Public and International Affairs in 1976, received a master's degree in public policy and management from Yale University. She is a managing director at Allen & Co., an investment banking firm in New York City specializing in media and communications. She founded and chaired the University's Women in Leadership initiative and is now a member of its advisory committee. She also served as chair of the New York City region during the Anniversary Campaign for Princeton in 1995-2000. She is on the boards of Teach for America and the Institute for Advanced Study.

Scully, who earned an A.B. in psychology from Princeton in 1972, holds an MBA from Harvard Business School, where he serves as a member of its board of dean's advisors. He retired in 2009 from Morgan Stanley after 35 years in the financial services industry and is a member of the board of directors of Bank of America Corp. and KKR & Co. He also co-chairs the New York advisory board of Teach for America.

Their daughter, Emma Scully, graduated in Princeton's Class of 2012.

In addition to their gift to the neuroscience and psychology complex, the couple generously supported other priorities of the Aspire campaign, including Annual Giving, 1976 Hall in Butler College and a fund for holistic yoga. Previously, they were donors to the Class of 1972 Dining Room in Whitman College, among other initiatives.

The new complex will feature state-of-the-art research facilities, meeting rooms, faculty offices and instructional space. The contemporary structures have been sited to take advantage of the landscape, with two of Peretsman-Scully Hall's five stories nestled into the ground on the north side emerging to ground level on the south side. The neuroscience portion of the complex, which is on the west side of the site, will have two above-grade stories. There will be many areas of shared space between the two, especially on the A and B/C levels below grade throughout both buildings.

The Department of Psychology currently is located farther north on Washington Road in Green Hall, which was built in 1927. The Princeton Neuroscience Institute shares space with the Department of Molecular Biology in the Thomas Laboratory, also in the natural sciences neighborhood.