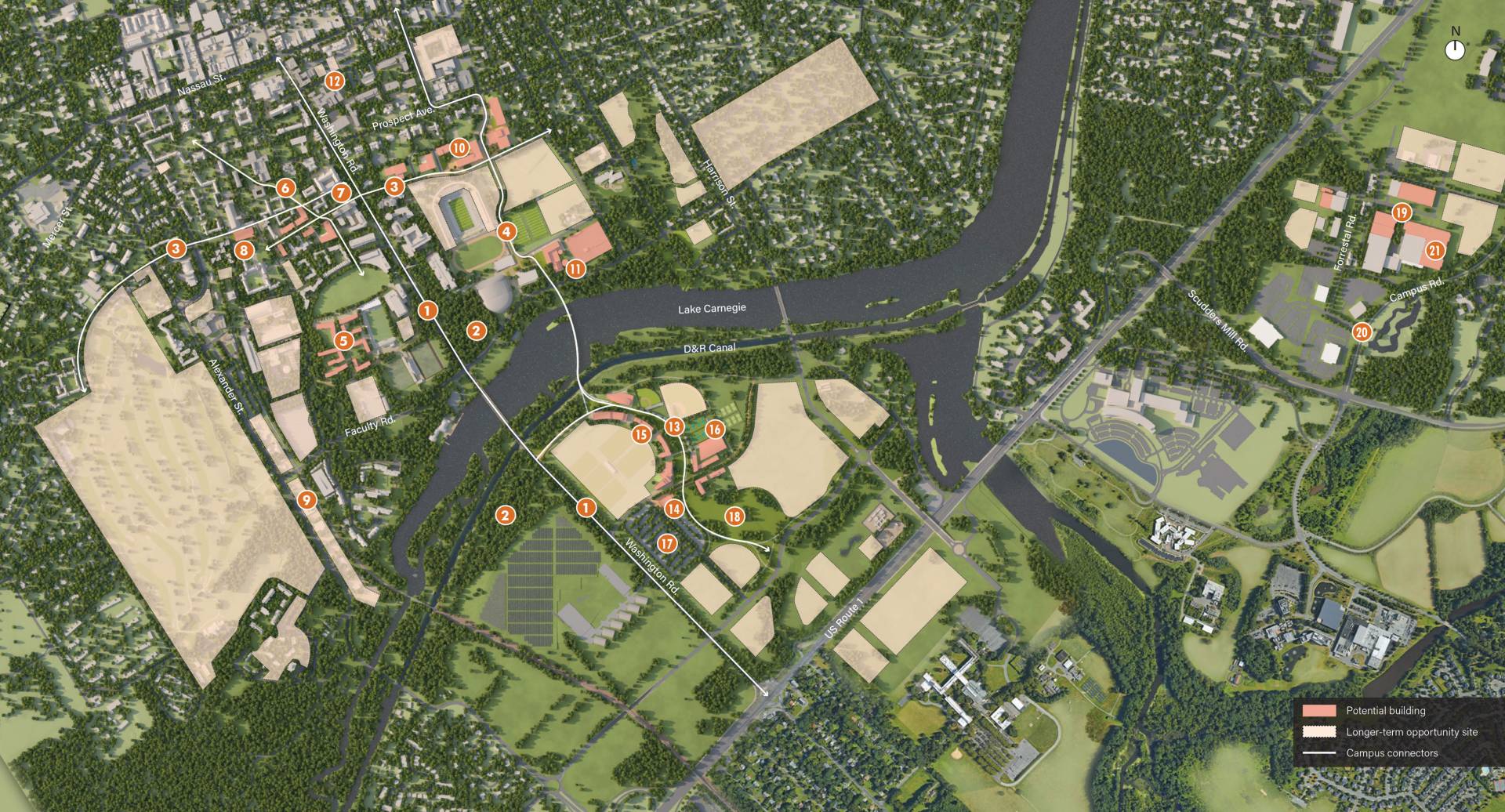 The framework proposes locations for several priority projects that were identified in a strategic planning framework that the University adopted in January 2016. These include a new residential college or colleges to permit the University to expand its undergraduate student body by 10 percent, new and improved facilities to support teaching and research in engineering and environmental studies, and space to accommodate academic partnerships with the corporate, government and nonprofit sectors in an expanded innovation ecosystem.

The framework identifies opportunities to improve the already developed portions of the University’s campus, with particular attention to its lands east of Washington Road where new facilities for engineering and environmental studies would be located and a number of new walkways and other improvements are proposed. The framework also proposes the development of a new Lake Campus on lands south of Lake Carnegie that the University purchased almost a century ago.

In an introductory essay, Princeton President Christopher L. Eisgruber notes that the framework provides “options that allow Princeton to achieve its strategic objectives over the next 10 years, while preserving its capacity to respond flexibly to changing needs over the next 30 years and beyond.” The campus plan, he says, “develops a mission-centered vision both for the campus’s more historic precincts and for areas whose identities are still being shaped — including the campus lands east of Washington Road and south of Lake Carnegie.”

He notes that the "ultimate value” of the plan “will reside in its capacity to promote the activities that define Princeton’s mission. The campus must not only house programs and people; it must also foster collaboration, invite serendipity, nurture inclusivity, cultivate argument, inspire creativity, generate community, and facilitate the rigorous, fearless and path-breaking pursuit of truth.”

These goals are incorporated in a set of five principles that the framework proposes to guide the evolution of the campus: 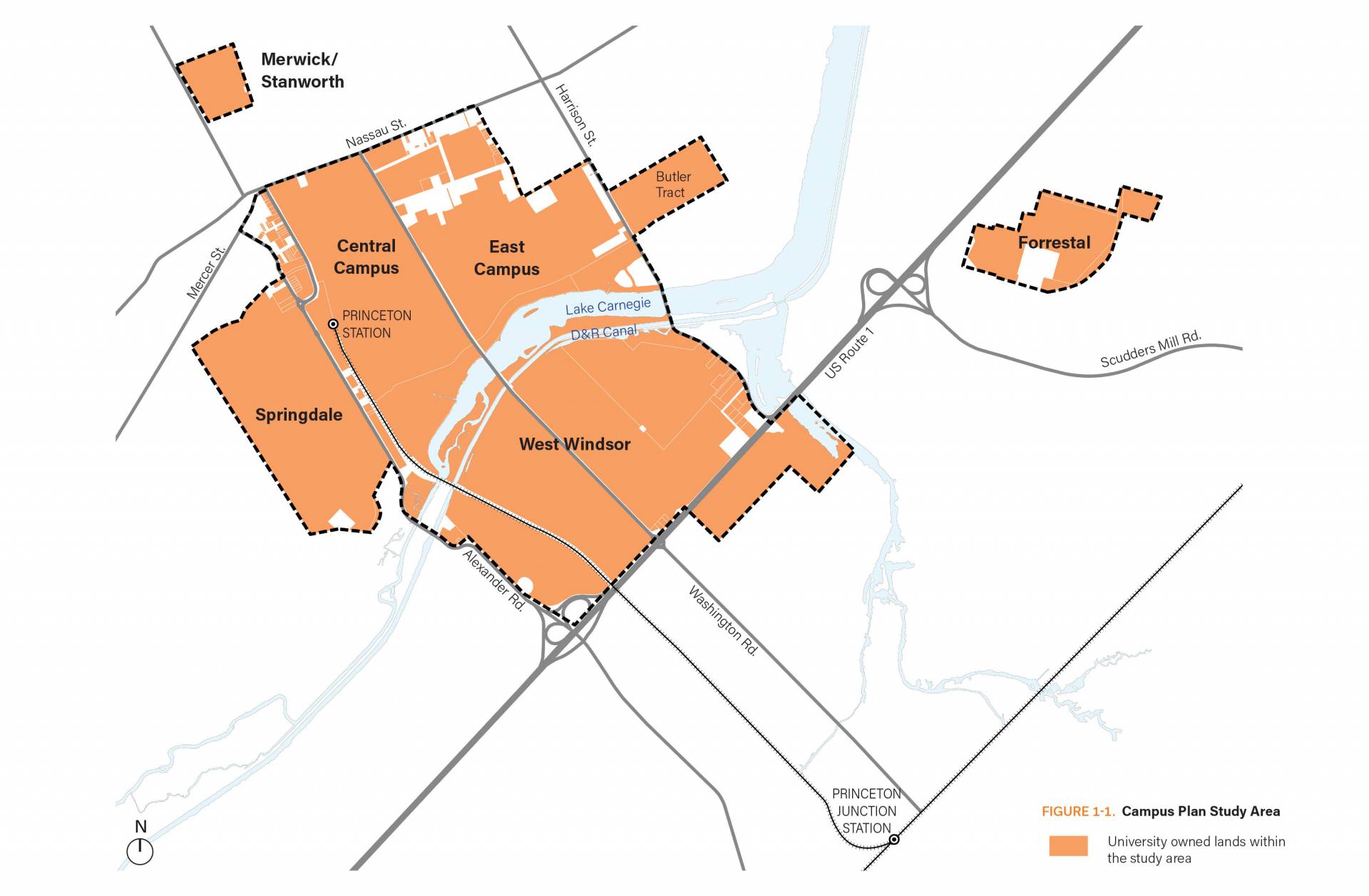 The development of the planning framework looked at all of the University’s campus-related lands.

Unlike the University’s previous 10-year plan that extended through 2016, this process looked at all of the University’s campus-related lands, including its lands south of Lake Carnegie in West Windsor. In addition to questions of land use and landscape, it addresses issues related to sustainability, movement patterns through and around the campus, and the University’s utility infrastructure. “The breadth and depth of this multi-dimensional approach to planning are exceptional and rare if not unique among institutions of higher education,” Williams said.

In an essay included in the framework, McCoy predicts that “the 2026 plan will be remembered for providing flexible options for stewardship of the central campus, renewal of the eastern campus, and, with the option to expand across Lake Carnegie, a vision for a fundamentally new era in the history of the campus.”

The proposed Lake Campus south of Lake Carnegie is envisioned as a dynamic, mixed-use community in a gently sloping landscape that could accommodate athletic facilities; administrative and academic partnership space; housing for up to 500 graduate students and potentially for postdoctoral researchers; convening, retail and amenity space; and a parking area and transit hub with shuttle, pedestrian and bicycle connections to other parts of the campus and the community. 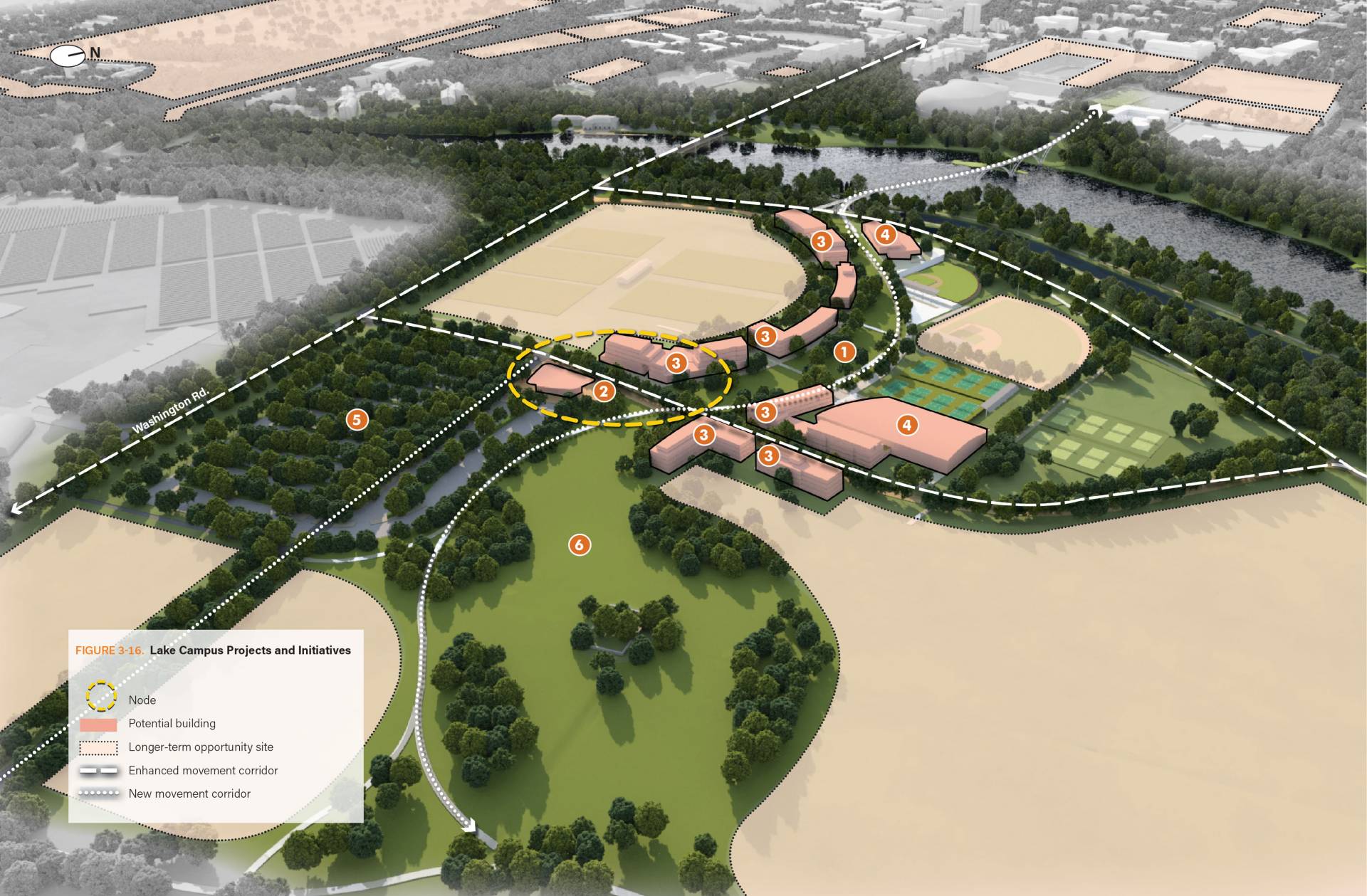 The campus planning framework envisions a new Lake Campus as an integrated extension of the existing campus. This drawing shows a perspective looking north toward Lake Carnegie and the Delaware and Raritan Canal.

The framework proposes walkways and bike paths to and through the Lake Campus, including a pedestrian bridge that would cross the lake and the Delaware and Raritan Canal at a location between Washington Road and Harrison Street. The bridge would be designed to preserve the historic canal’s character and the natural features of the area while providing members of the campus community, visitors to campus and the general public with a safe and scenic way to cross the lake without having to use existing heavily travelled vehicular roadways. The bridge would be integrated into the regional bicycle and sidewalk networks in Princeton, West Windsor and Plainsboro.

The University’s strategic planning process identified expansion of the undergraduate student body as a priority. This expansion requires at least one new residential college, which has been proposed for a site south of Poe/Pardee Fields that also could accommodate a second college, either in the near or longer term.

Development of the first residential college on this site would require the relocation of the Class of 1895 Softball Field and the Lenz Tennis Center. The framework proposes that new and improved facilities for softball and tennis be included on the Lake Campus, which already includes a rugby field and cross-country course. The new tennis site would include a racquet center for indoor tennis and squash, along with other outdoor courts for recreational use.

Over time it is anticipated that other sports might be located on the Lake Campus, including potentially a hockey arena with two sheets of ice to replace the aging Baker Rink. A proposed athletics hub would include locker rooms, coaches' offices, training facilities and other amenities, and the campus shuttle would be scheduled with careful attention to the needs of student athletes. 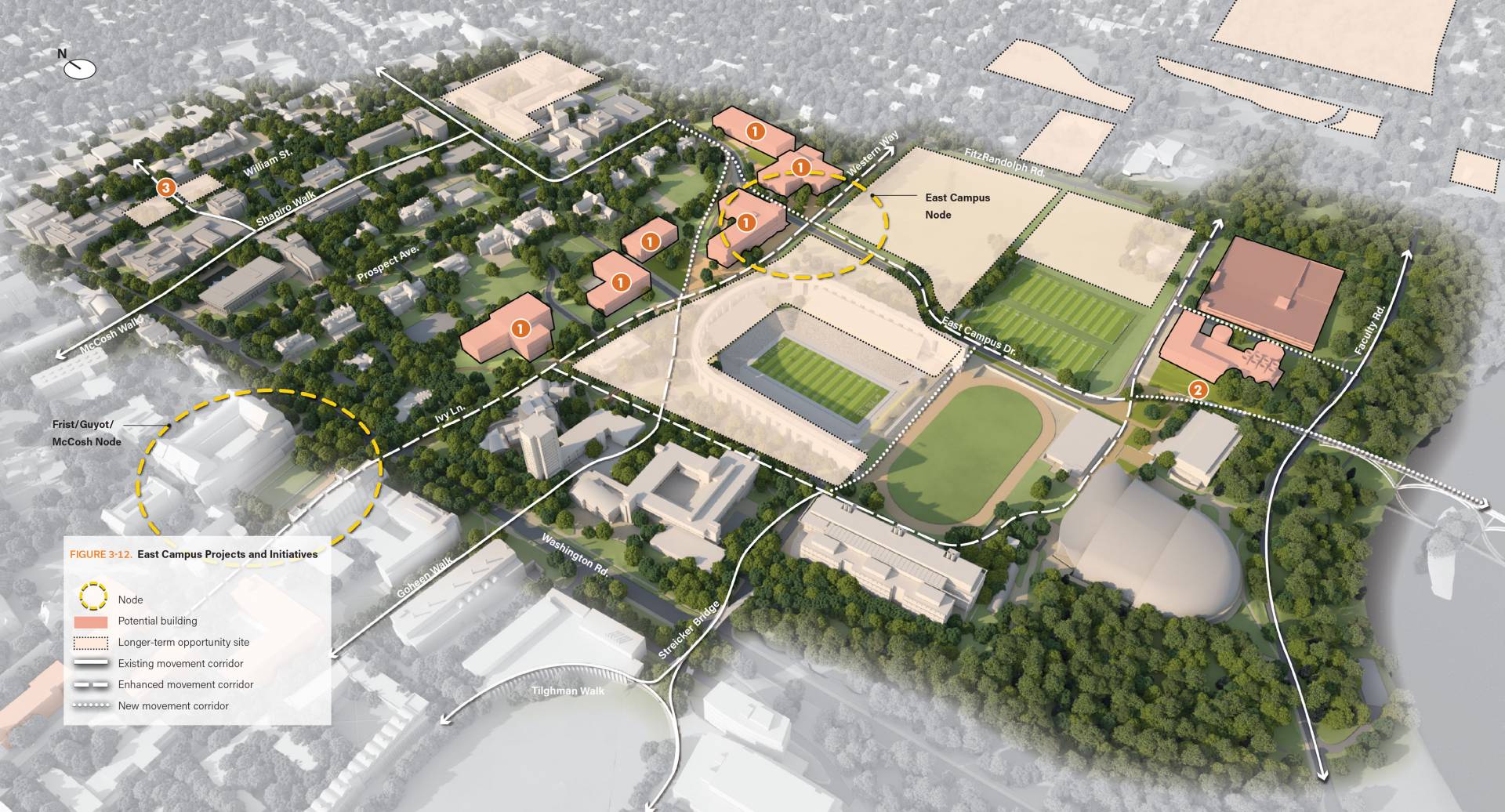 Significant development on the East Campus and a transformation over time from its existing street and block pattern to a finer grained and variegated campus setting akin to the Central Campus is part of the campus plan framework.

The proposed location for engineering and environmental studies along the north side of Ivy Lane and Western Way would facilitate regular interaction between these programs and with nearby natural science departments and the Woodrow Wilson School of Public and International Affairs. The location is near existing engineering spaces that will remain in place, and once new spaces become available, decisions will have to be made about whether to renovate, repurpose or replace some or all of the existing Engineering Quadrangle buildings. Decisions will also have to be made about best uses for the spaces in Guyot and Eno halls that would be vacated by the Department of Ecology and Evolutionary Biology, the Department of Geosciences and the Princeton Environmental Institute.

To facilitate pedestrian and cycling movement throughout the campus, the framework proposes two enhanced “campus connectors” — an east-west connector from the Graduate College on the west of the Central Campus to a new activity node on the East Campus near the new engineering and environmental studies buildings, and a north-south connector on the East Campus from Nassau Street to the proposed pedestrian bridge and the Lake Campus. 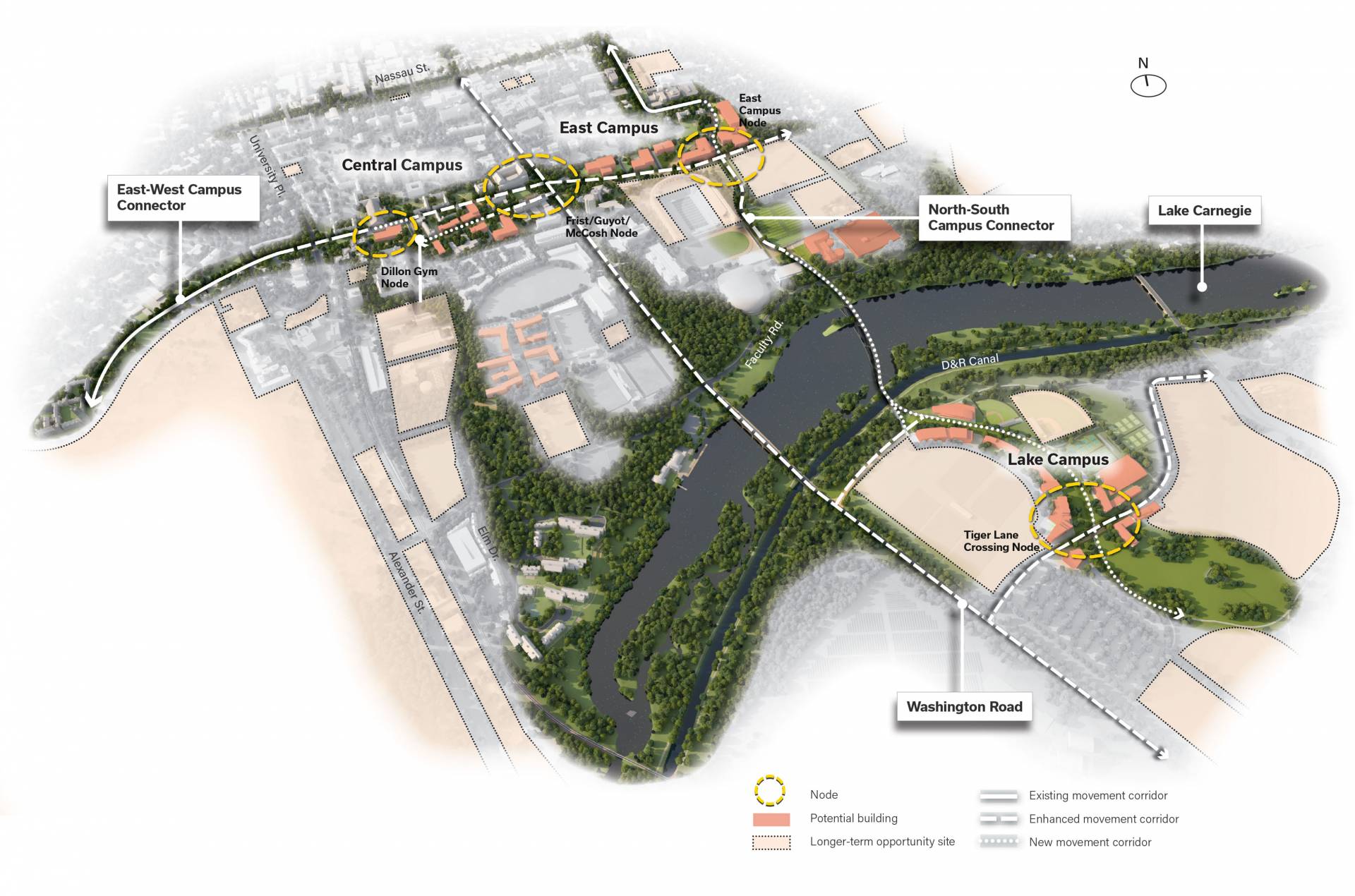 The framework envisions a campus with three distinct yet cohesive areas: Central Campus, East Campus and Lake Campus. The campus could be connected through multiple internal walkways and pathways, but also by Washington Road, an east-west campus connector, a north-south campus connector and Lake Carnegie.

The framework also proposes an enhanced “diagonal walk” from Mathey College in the northwest of the Central Campus to McCosh Health Center; options for expanding the capacity of University Health Services; the development of an enhanced activity node in the area near Frist Campus Center, Guyot Hall and McCosh Health Center; and reconfiguration of the site where Wilson College is located.

The framework incorporates a number of sustainability objectives and identifies strategies to promote cycling, walking, mass transit and other alternatives to single-occupancy vehicles. To meet the University’s parking needs it proposes a parking structure on the current lot 21 on the East Campus and a new surface parking lot on the Lake Campus that would be connected to the rest of the campus and the community by pathways for walking and biking and by TigerTransit shuttles. The framework also identifies potential locations to reserve for future housing for faculty and staff as well as for graduate students and postdocs. 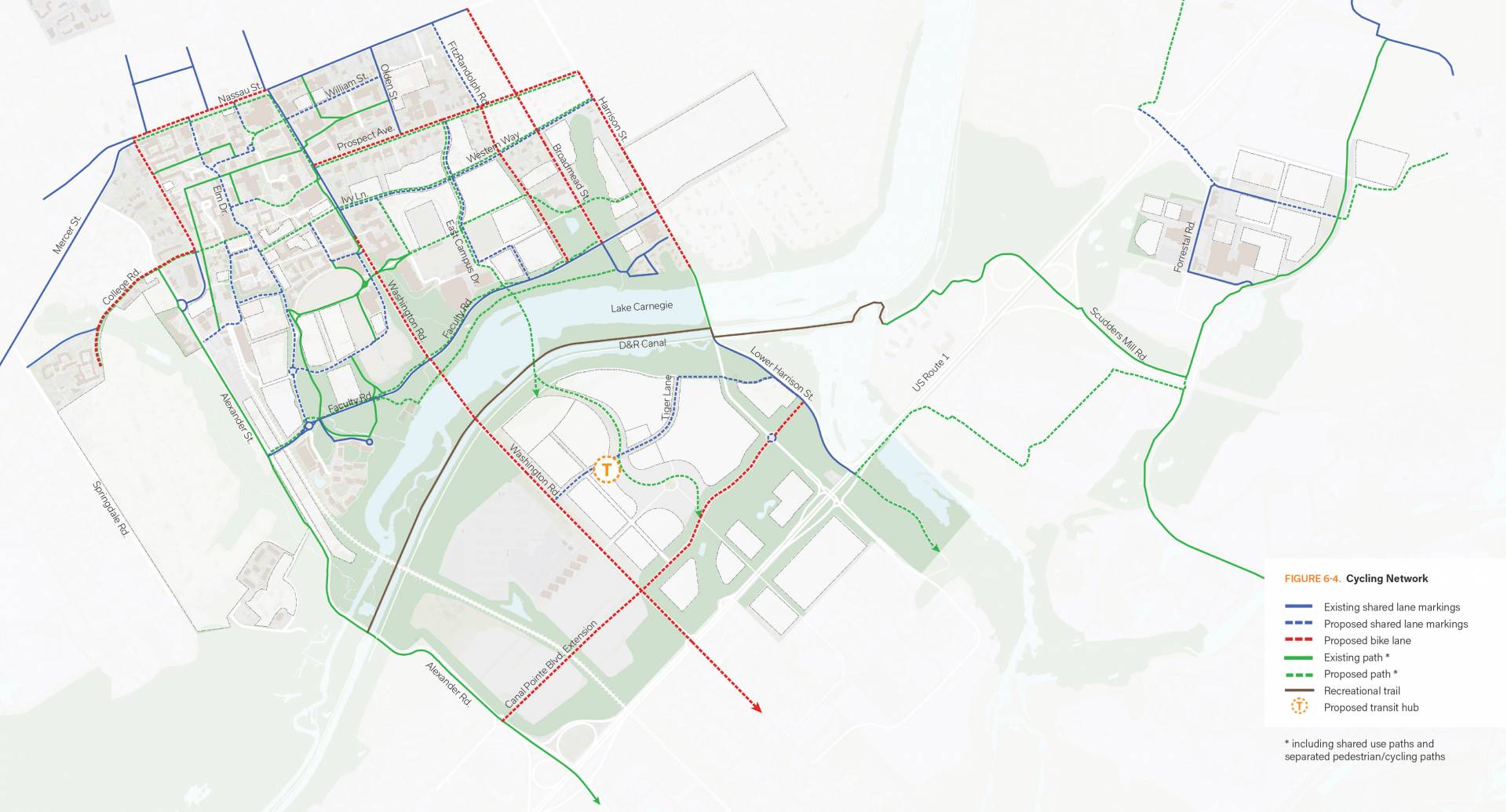 To achieve its full potential, a cycling network would comprise an interconnected system of both on- and off-road paths as well as a range of bike amenities at appropriate campus locations.

The planning process recommended preserving the Butler Tract for future use for University-related housing and preserving future flexibility for long-term use in support of the University’s educational mission for the lands currently leased to the Springdale Golf Club. The framework makes no recommendation regarding specific uses of the Springdale lands, although it notes that any future development would not occur for at least 10 years, and that any development would be “sensitive to potential impacts on the adjacent neighborhood; would enhance the stream corridor through these lands and recognize the historic attributes of the property; and would seek to improve public access to open space on the site, including via pedestrian and cycling pathways.”

While the planning framework suggests possible locations and options for campus development, it does not determine whether or when the University will proceed with the projects or what they will look like. The University is developing a capital plan to determine which structures it will aim to build and when, and it is engaged in a campaign planning process to determine how much it will be able to raise to help pay for the projects.

“In reading this framework,” it says, “it is important to remember that the purpose of campus planning is to provide guidance for where development might occur, but whether, when and how such development will occur depends on the outcomes of these other capital planning and campaign planning processes.”

In its final section, the framework notes that “just as the Princeton campus will continue to evolve as projects are approved and new opportunities and priorities emerge, so too is this planning framework intended to evolve over time and with experience…. [I]t leaves the door open to multiple possible directions for the future, while providing enough guidance to inform decision-making over the nearer term. By integrating planning for development with planning related to land use, sustainability, infrastructure, transportation and landscape, it allows the University to pursue multiple objectives in a comprehensive way.”

It concludes: “This framework envisions a campus with an expanded student body and one or more new residential colleges; substantially expanded and improved space for engineering and environmental studies; a thoroughly reimagined East Campus; a lively and attractive Lake Campus fully integrated into the rest of the University; a geography in which Lake Carnegie has moved from the periphery to the center of campus; enhanced achievements in multiple forms of sustainability; a significant shift from single-occupancy vehicles to other modes of transit, including walking, cycling, shuttling and mass transit; and new academic partnerships in an innovation ecosystem that supports the mission of the University and increases its capacity to have a positive impact on the world.

“The purpose of the planning framework is to help the University make wise and informed decisions as it pursues these goals and others that undoubtedly will emerge over time, while sustaining the distinctive sense of place that has long characterized the campus lands that have been entrusted to its care.”