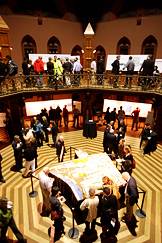 About 875 people filled Chancellor Green Wednesday, Nov. 8, for "Plans in Progress," an open forum intended to provide members of the University and local communities with an opportunity to learn more about the University's new campus plan and to offer feedback on the effort. 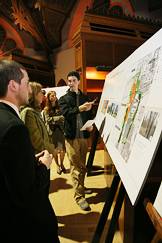 The event featured dozens of visual displays set up around both floors of the rotunda on all aspects of the campus plan. Members of the planning team were available at each station for discussion and to answer questions. As ideas were generated, team members wrote them down on large pads of paper on easels. At left: A major attraction was a large model of the campus set up in the center of the rotunda.

"How can you improve access for arrivals coming from Alexander Street?" "What are the exterior finishes on Butler College going to look like?" "Where will the Dinky station be located?"

Those were just a few of the questions asked in Chancellor Green Wednesday, Nov. 8, during "Plans in Progress," an open forum intended to provide members of the University and local communities with an opportunity to learn more about the University's new campus plan and to offer feedback on the effort.

About 875 people attended the four-hour event, which featured dozens of visual displays set up around both floors of the rotunda on all aspects of the campus plan, with themes ranging from landscaping and sustainability to parking and transportation. Stations also focused on the various campus "neighborhoods" that are part of the plan, such as Alexander Street/University Place, which the University is considering as a location for various facilities to meet the goals of its new creative and performing arts initiative. A major attraction was a large model of the campus set up in the center of the rotunda.

"I think this is a superb event for the University to put on to bring in the community," said Wendy Benchley, a member of the Princeton Borough Council. "It's a very healthy step. The displays are fascinating, and I compliment the University on the amount of detail included." 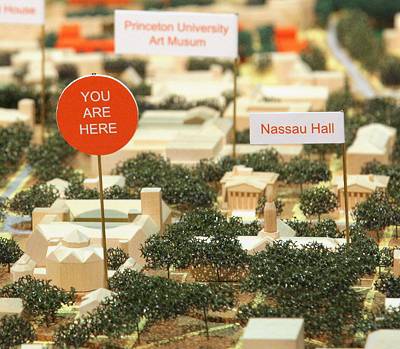 The University is midway through a two-year effort to create a comprehensive plan for the campus that will guide development over the next 10 years and beyond. Through the open forum, the planning team was seeking to learn more about issues that matter to the University and local communities as well as to make available more specific information on the planning effort.

Members of the planning team were available at each display station for discussion and to answer questions. As ideas were generated, team members wrote them down on large pads of paper on easels. Those attending also were encouraged to fill out feedback cards with ideas about how the campus should grow.

"I've had conversations with people all along the way, and they are writing down suggestions and promising to give them some thought," said Jotham Johnson, a staff member in the development office who attended the event.

Executive Vice President Mark Burstein said, "We're very pleased that members of all communities have turned out. The conversation has been very engaged."

The planning initiative follows an intensive series of internal discussions with senior administrators, faculty, architects and other key stakeholders through which the University has developed a set of overarching principles for campus planning and development: maintain a pedestrian-oriented campus; preserve the park-like character of the campus; maintain campus "neighborhoods" while promoting a sense of community; develop in an environmentally responsible manner; and sustain strong community relations.

When complete, the plan is intended to ensure that the next 10 years of growth is designed within the context of a clear vision for the campus and its role in the community. It will emphasize sustainable growth that is supported by improvements to infrastructure and open space and is sensitive to the natural environment. It will balance development critical to the vitality of a major teaching and research institution with the preservation of the qualities that make the historic campus one of the community's most beloved places.

"I'm blown away by how seriously the University is taking [this process] and how beautiful the exhibits are," said Micky Weyeneth, a Princeton resident for 30 years, who added that she appreciated being involved.

The planning effort is being led by the award-winning firm of Beyer Blinder Belle Architects & Planners LLP, which is working with a team of seven other planning and design firms specializing in transportation engineering, landscape design, storm water management, parking and wayfinding. BBB is taking a fresh look at the 400-acre campus, providing a framework for campus growth that seeks to strengthen and reintroduce a landscape network throughout the campus while improving traffic, parking and pedestrian circulation between the campus and surrounding neighborhoods.

Neil Kittredge, a partner at BBB and the primary liaison between the firm and the University, said toward the close of the open forum, "This is one of the best events of this kind I've ever seen. The traditional way of doing this is in an auditorium with a PowerPoint presentation. This is so much more personal. We're really able to talk to people and walk them over to a station where they can ask their specific questions."

Those with additional questions can visit phase one of the initiative's website, which incorporates and expands on many of the materials presented at the open forum. It includes a timeline describing the development of the campus since it was established in Princeton in 1756, along with maps and images. Like the open forum, it is organized by theme and by neighborhood.

As work progresses during the year, additional information will be posted on the site. Feedback also is being sought through a mechanism on the site.