Princeton University is moving ahead with plans to redevelop graduate student, faculty and staff housing, with several major steps taken in the past few months.

• The selection of Studio Ma of Phoenix and Princeton as the architect and planner for the redevelopment of the Hibben-Magie site south of campus for graduate student housing in conjunction with American Campus Communities (ACC), the developer chosen to oversee the project.

• The presentation of initial plans for the Hibben-Magie site showing two- to five-story energy-efficient structures that preserve most of the existing healthy woodlands. The current plans for the redeveloped site allow for 715 graduate students, an increase of more than 200 over the current capacity.

• The selection of The Georgetown Co. of New York City as the developer for Stanworth and Merwick. These sites are north of campus and include the current Stanworth Apartments and former Merwick Care Center rehabilitation facility.

• The intention to use most of Stanworth for short-term housing for graduate students during the redevelopment of Hibben-Magie, but to allocate Stanworth and Merwick, in the long-term, for faculty/staff housing.

The projects are part of the University's Housing Master Plan, begun in 2005 to enhance housing programs for faculty, staff and graduate students, as well as the Campus Plan, begun in 2006 to guide campus development through 2016.

"We're making significant progress toward our goals of better meeting the needs of our graduate students, faculty and staff as well as improving the condition and sustainability of our buildings, while limiting our impact on the surrounding neighborhood. And we’re accomplishing this by leveraging the expertise of the residential development sector," said Michael McKay, vice president for facilities.

The development of projects in the Housing Master Plan and other off-campus ventures are being managed by the Office of Real Estate Development. The office reports to McKay and provides property development and project management services for properties located off campus.

"For projects like these, we accomplish our objectives by leveraging outside partners and the University's real estate assets for their most appropriate uses," said John Ziegler, director of real estate development. In addition to residential projects, the office oversees administrative buildings and multi-user facilities. 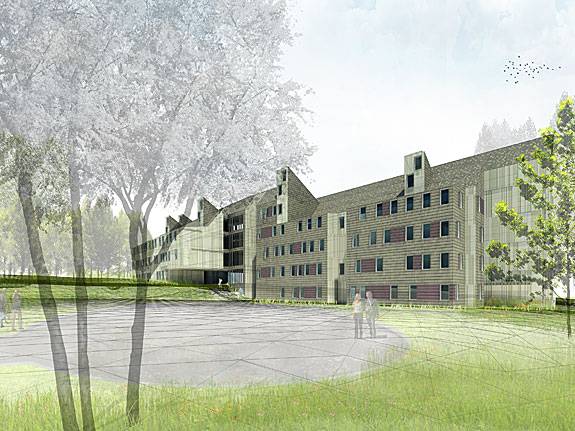 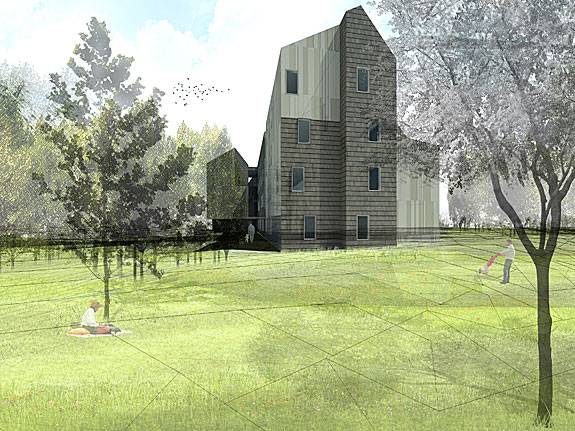 The Hibben and Magie apartments are two adjacent eight-story buildings located south of Faculty Road and east of Alexander Street near Lake Carnegie. Constructed in the 1960s, the 192 units with a capacity for 512 residents have outmoded building systems and interior layouts, and do not offer residents amenities found in more contemporary housing facilities.

Princeton has been working with ACC since last year to choose an architect, determine the size and mix of the new units (one-bedroom, two-bedroom, three-bedroom or four-bedroom) and decide whether or not to retain all or part of the existing Hibben-Magie buildings as part of the design. Graduate students and the Graduate School staff have been engaged throughout the process.

Studio Ma is an award-winning architecture and environmental design firm that embraces the philosophy of "ma," a Japanese term that acknowledges the dynamic relationship between objects and their surrounding environment.

"Princeton and ACC focused on selecting an architect that is experienced in student housing and is particularly sensitive to the traditions of campus architecture, as well as the beauties and environmental sensitivities of the woodland site," said University Architect Ron McCoy. "We interviewed several excellent firms and agreed that Studio Ma would be best for this project."

Studio Ma and ACC's plan for the site begins with taking down the current buildings. In their place, the firms propose erecting, primarily on existing impervious surfaces, some 13 structures with 329 units and a capacity for 715 graduate students and their families. Plans include a mixture of one- to four-bedroom townhomes (on multiple levels) ranging in size from 1,300 to 1,600 square feet and apartments encompassing 650 to 1,100 square feet. The larger units are intended to address the desire of some graduate students to have privacy, but also to pay lower rents by sharing common areas such as kitchen and dining spaces.

When planning began for the Hibben-Magie site, those involved realized that the development capacity was more than initially thought, according to Andrew Kane, director of housing and real estate services. The Housing Master Plan had called for Stanworth to change from housing for faculty and staff to housing primarily for graduate students, but the additional capacity at the Hibben-Magie site will make that unnecessary.

"It makes economic and programmatic sense to build out the Hibben-Magie site to its full capacity," Kane said. "The opportunity to house more graduate students on the site while still retaining a community feel is very appealing. This allows us to meet our commitment to house 70 percent of eligible graduate students and to maintain Stanworth for faculty and staff."

Plans also call for a "commons" facility for residents of the Hibben-Magie site, including a fitness center, social lounge, multi-function room, computer cluster, children's playroom, and outdoor social and recreation areas. In addition, a parking deck with at least 432 spaces will be built. The site is served by the University shuttle system. (Graduate students in University housing are not provided with on-campus parking passes.)

"This graduate housing will, above all else, look and feel like a community," McCoy said. "The mixture of townhomes and apartment buildings will enhance the experience of the site and the views of the lake. The buildings are related to each other through pathways, landscapes and vistas. The architectural design recalls the scale and richness of form that is characteristic of the historic residential buildings on the Princeton campus."

In addition to preserving the woodlands, the plan uses the natural slope of the site to locate taller buildings toward the lower part of the grounds and smaller buildings toward the higher ground levels, minimizing the perception of mass. The two- and three-story townhomes will be constructed primarily of wood frame. The four- to five-story apartment buildings will be constructed primarily of structural steel framing. The project is aiming for LEED Silver in the U.S. Green Building Council's certification program by using sustainable strategies for lighting, plumbing, heating and cooling. The site -- in addition to the buildings -- will be developed under the University's Sustainability Plan, with creative methods for stormwater management, in particular.

Construction is anticipated to begin in 2012 and to be completed in time for graduate students to occupy the new complex in the summer of 2014.

The existing (at left) and proposed (at right) site plans demonstrate how the new structures will be constructed primarily on existing impervious surfaces and how many of the current woodlands will be preserved. (Click on image for larger view)

The Georgetown Co. is assisting the University with the creation of a strategic real estate development plan for the Stanworth and Merwick sites.

Georgetown is a real estate company that has developed, owned and overseen a variety of residential, office, retail and recreational properties. It served as development manager for New Albany, Ohio, an 8,000-acre planned mixed-use community near Columbus that has received widespread recognition for its planning and architectural achievements.

"We were very impressed with Georgetown's development versatility, and its focus on quality planning and design," said Assistant Vice President for Facilities Chad Klaus, who directed a team of Princeton administrators through the search for a firm for the Stanworth and Merwick project. "We visited several projects by Georgetown -- each one was unique, yet contextual."

Stanworth, located along Route 206 (Bayard Lane), is a 16-acre site that includes 23 buildings featuring 154 units with a mix of studio, one-bedroom, two-bedroom and three-bedroom apartments. The brick and shingled buildings were built in the 1940s and are situated in a grassy, park-like setting, giving the complex the feel of a neighborhood.

The nine-acre Merwick site is adjacent to the Stanworth Apartments. The site was acquired from the Princeton HealthCare System when the building was vacated in late 2010. Due to Merwick's proximity to Stanworth, it is anticipated that the two sites will be planned as an integrated community. The planning process also will seek to relate these sites to an adjacent site occupied by the YMCA-YWCA and to the surrounding neighborhood.

Plans for the Merwick site and the current Stanworth apartments have not yet been finalized. Focus groups with faculty and staff members are being conducted to determine preferences for size and other features.

The University hopes to select an architect and planner for the project this spring, and to begin work on the Merwick site in 2014. Units there are expected to be ready for occupancy in 2016.

The development timeline for the Stanworth site is yet to be determined. Currently, 103 of the 154 units are occupied, primarily by faculty, staff and their families. During the construction at Hibben-Magie (beginning in 2012), most of the Stanworth units will be occupied by graduate students. Once the Hibben-Magie project is completed, Stanworth/Merwick will become a faculty/staff housing site.

The University intends to take down the 70-year-old buildings at Butler Tract (bounded by Harrison Street, Hartley Avenue and Sycamore Road), after the Hibben-Magie work is completed. However, Princeton has no immediate plans for construction at that site.