Below left: An architect's rendering shows the open nature of the design for the new Butler College complex. This view is looking east on Goheen Walk, with Wu Hall on the left and the new dormitories on the right.

As part of the project to enhance the University's residential college system, officials are moving ahead with plans to demolish five dormitories and construct new dormitories on the same site.

The current scenario calls for Lourie-Love, 1922, 1940, 1941 and 1942 halls to be razed starting in the summer of 2007. A new set of buildings with room configurations more conducive to residential living and exteriors better suited to the surroundings will be erected in their place. The site is located on the south end of campus, east of Elm Drive and north of Bloomberg and Scully halls, which border Poe-Pardee Field. 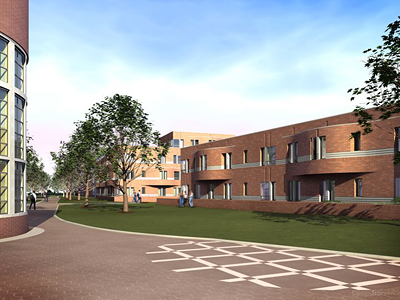 Jon Hlafter, University architect, said that the Modernist dorms slated for demolition historically have not been as well liked by Princetonians as the Collegiate Gothic dormitories constructed early in the 20th century. "Most people think the dark-colored brick and some of the design elements just feel wrong in a dormitory setting," he said.

In addition, the room configurations are not ideal, he said. "There are no suites. Most of the rooms are either singles or one-room doubles and so are not well suited for being a substantial part of a residential college where having students get to know one another is a goal," Hlafter said.

As planning for the new residential college system progressed and as this complex made its way to the top of the list for major maintenance under the University's dormitory renewal program, architects and campus planners began weighing the alternatives. "We actually spent the better part of a year testing out options to see if we could keep some of the dorms -- re-use those spaces in a different way and cover the existing exterior materials," Hlafter said. "After trying hard to see if that would work, the conclusion was that the very small savings just weren't worth it."

The architect selected for the project is the renowned firm Pei Cobb Freed & Partners of New York. Henry Cobb, a founding partner in the firm, is designing the new dorms. He also was the architect for the University's Friend Center for Engineering Education, which opened in 2001.

They will be constructed of a lighter red brick more the color of nearby Wu, 1915 and Bloomberg halls. Current architect's renderings also show horizontal stripes of limestone accenting the design. "The new buildings are inspired in many ways by Wu Hall, a contemporary building with some traditional references and decorative elements that make it more interesting than the dorms that are to be demolished," Hlafter said.

The closed-in courtyards of the existing dorms will be replaced with open courtyards and walkways providing longer vistas that are a trademark of the Princeton campus. "The way the new buildings are being arranged will offer a much more permeable complex than the existing set of buildings," he said. "The front door of Wilcox Hall, for example, will open out to a walkway that leads to the playing fields instead of the side of a dormitory."

The buildings will have two, three and four stories. But perhaps their most distinguishing characteristic will be what is planned for below grade. Architects intend to connect the separate buildings at that level and fill the space with common areas, including a café, study areas and seminar rooms. In a big departure from most dormitory basements, these spaces will have large windows and open out to courtyards. "This whole lower level will be a very vital place of activity," Hlafter predicted.

A majority of the dormitory rooms will be suites, with two bedrooms, a common area and a bath. The bedrooms, Hlafter said, will be the largest of any suite on campus. The complex also will have some paired singles that share a bath.

The new Butler dormitories will house 242 undergraduates and four graduate students -- a new component of the residential college plan -- as well as a suite for a visiting faculty fellow. Hlafter noted that a wing on the far east side of the complex will house 43 juniors and seniors who will not be affiliated with Butler College but will be more closely aligned with Scully Hall, a nearby upperclass dorm. Scully contains primarily paired single rooms, and the new wing will offer juniors and seniors the option of living in large suites.

Bloomberg Hall, currently an upperclass dormitory, will become part of Butler College in 2009. Butler residents presently eat in the Wu Hall dining facility and will continue to do so with the new system.

Hlafter said that the project also will involve the construction on the current site of 1942 Hall along Elm Drive of three houses for the faculty members who serve as masters of Butler, Wilson and Whitman colleges.