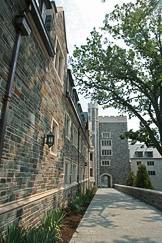 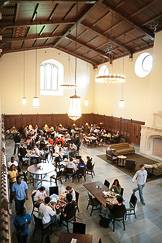 The rooms are finished with wood trim, including the oak beams forming the peaks of the gabled ceilings in the main dining hall.   Above left: Fisher Hall (right) and North Hall (left) are viewed from the terraced North Court. 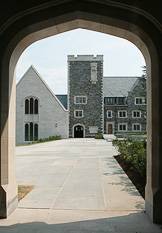 Seen through an arch, Community Hall (at left) is one of two buildings in the college whose limestone walls are a visual punctuation set apart from the fieldstone of the dormitories (North Hall is at right).     At left: Students pass by arches along the walkway on North Hall known as "Wright Cloister," one of Whitman College’s many architectural highlights. 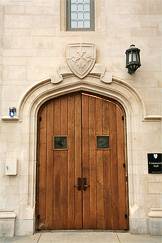 The doors to Community Hall are topped with the Whitman College shield that is carved into the limestone. 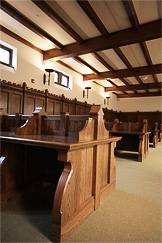 The reading desks in the library also were designed by college architect Demetri Porphyrios. At left: From left, Lauritzen Hall, Hargadon Hall, Murley-Pivirotto Family Tower and North Hall, including Wright Cloister, are shown from the South Court.

View a time-lapse video taken from a camera mounted on Patton Hall, which archived images of the Whitman College construction project every hour for the past three years. Below, from top to bottom: The entrance to Community Hall, which houses the college's dining facilities, is through a row of finished oak doors beneath a raised belvedere into a gallery. The servery is designed around a cook-to-order format. This detail of the stone work shows a carving in limestone of two tigers on North Hall. More than 175,000 pieces of fieldstone from quarries in Alcove, N.Y., and Susquehanna, Pa., were used in the construction. At the peak of the project, some 80 stone masons were supported by 70 additional laborers while they worked with more than 6,000 tons of stone.   The college's 405 bedrooms have dark stained floors and custom-made, triple-glazed mahogany casement windows. Jennifer Ross (in orange shirt), a member of the class of 2011, had help from her family when she moved in this fall as one of the college's first residents. For more details about Whitman College, see "By the numbers" in the Sept. 24, 2007, Princeton Weekly Bulletin.     Photos: Denise Applewhite

The Collegiate Gothic buildings rise in individual gestures of counterpoint that come together in a single composition.

Walls of hand-set stone rise from 20 feet to as high as 100 feet to make up the complex of residential, social and academic buildings that sweep upward above terraced courtyards. Bluestone walkways criss-cross at the feet of dorms and communal buildings, which include a large gabled dining hall and a great tower that announces the entry into the college near the south end of Princeton's campus.

"The beauty of the buildings of Whitman College," Porphyrios said, "arises from their unity in multiplicity -- from their rhythm and syncopation, the color and texture of their materials, from the sculptural quality of the stone profiles." 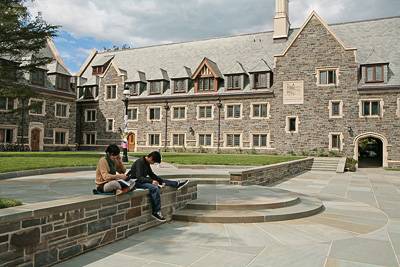 Designed as the University's sixth residential college, the 250,000-square-foot Whitman College is as unique for its design as for the techniques employed to build in a traditional manner in the 21st century.

"Whitman College is important for the revival of traditional architecture in the States," Porphyrios said. "Whitman College is about an architecture of place-making and of robust, sustainable construction. It continues and furthers Princeton's tradition of collegiate campus life that is conducive to social interaction while fostering the values of leadership."

Construction began in July 2004, and the college opened this fall to host its first group of students as part of the launch of Princeton's four-year residential college system.

The college is named for the family of Meg Whitman, the president and chief executive officer of eBay and a member of Princeton's class of 1977. Porphyrios, a 1980 Princeton graduate alumnus, designed the project with his London-based firm Porphyrios Associates. The firm Einhorn, Yaffee, Prescott of Albany, N.Y., was executive architect and engineer.

Porphyrios' firm was selected to reintroduce the Collegiate Gothic that first came to campus in 1896, when Princeton's leaders celebrating the school's 150th anniversary sought inspiration for their buildings from colleges in England known for academic excellence. 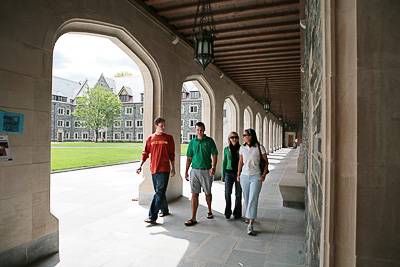 "Demetri continues the wonderful tradition of Collegiate Gothic at Princeton, but thought about it through a modern lens," said Mark Burstein, executive vice president of the University. "He took the tension between historic and modern design, which is one of the strengths of the Princeton campus, and integrated this dynamic into the project."

Princeton selected Porphyrios because, as an architect and planner, he approaches building projects in the context of their surroundings, Burstein said. As the University completes a master planning effort for campus development, administrators wanted to choose an architect who could design a project to improve one of the significant growth areas of the campus.

"Whitman College is at the center of a pivotal point of the campus," Burstein said. "It anchors our new southern edge and strengthens the connection between the historic campus and property to the west -- a gateway to future development."

Throughout its construction, architects and planners from across the country have toured Whitman College to learn more about the features and techniques in realizing Porphyrios' Collegiate Gothic vision. True to the style's tradition, Whitman College was completed with stone wall masonry, slate roofs, and copper and wood detailing.

Unlike previous colleges built at Princeton dorm by dorm, Whitman was completed as a single project, making it one of the University's largest single construction projects in Princeton's 261-year history.

"Whitman College is much larger than other buildings I have designed for Oxford and Cambridge colleges," Porphyrios said. "One of the early challenges, therefore, was to come up with design strategies that encouraged a sense of individuality of the various parts while giving an overall cohesion to the college as a whole."

"We broke down the program into [separate] buildings, each with its own identity of composition and detailing, yet all within the language of the Princeton Collegiate Gothic," Porphyrios said. "The result has been a community of buildings arranged around three collegiate courts, each one with its distinct spatial sense of place. Whitman College is a family of buildings: small and large; some normative, others honorific; some simple, others more ornate; some built in random fieldstone, others in coursed Indiana cut-stone -- yet all speaking to each other in a genuine dialogue of purpose and propriety."

Among the many distinctive features of Whitman College, Community Hall is one of two buildings in the college whose limestone walls are a visual punctuation set apart from the fieldstone of the dormitories. Trefoils top the wall of an adjacent raised overlook that carries a view east over a sloping courtyard that greets visitors entering the campus from one of its gateways on Elm Drive. 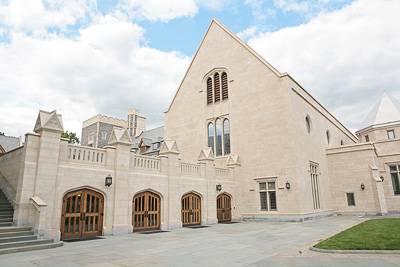 A row of finished oak doors beneath this raised belvedere brings students into a gallery, where they pass through an ornate wood screen topped with finials to enter the main dining hall. Here, as is the case throughout the buildings of Whitman College, the rooms are finished with wood trim, including the oak beams forming the peaks of the gabled ceilings in the main dining hall and the octagonal private dining room. The college's 405 bedrooms have dark stained floors and custom-made, triple-glazed mahogany casement windows.

Another highlight is a series of arches forming an arcade along the walkway on North Hall known as "Wright Cloister." The feature was named in honor of Thomas Wright, a 1962 Princeton alumnus who retired as vice president and secretary in 2004 after more than 30 years of service to Princeton.

The traditional touches of stone-cut niches and 85-pound bronze light fixtures on the building exterior were married to interior features that include custom-made reading desks designed by Porphyrios for the library. 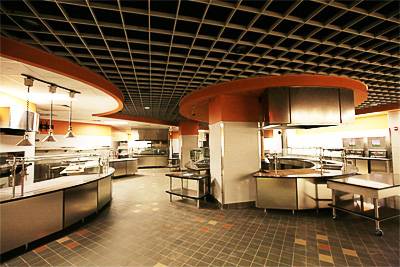 Adding to the modern conveniences located inside are a digital photo lab, dance practice studio, student TV lounge, a state-of-the-art servery with retail and cook-to-order features that include a brick oven, and a 65-seat drama theater, complete with dressing rooms. Renowned interior designer Sheila Bridges of New York City designed the lounges and dining spaces to complete the interior, just as landscape architect Michael Van Valkenburgh Associates of Cambridge, Mass., was enlisted to create a greenscape of new trees, varieties of mature oaks and dogwoods, towering cedars of Lebanon, Japanese zelkovas, and a lush woodland glen to complete the aesthetic of the building's exterior.

Stone masonry in the 21st century

Perhaps most distinctive is the buildings' stonework, or specifically, the process through which it was completed, said University Architect Jon Hlafter.

"Stone masonry today is a true art, and at one time, the biggest single challenge we were concerned about was being able to find enough of the appropriate stone and then the artisans to successfully set that stone," Hlafter said.

Porphyrios insists that the materials and the skilled craftsmen for stonework are readily available to institutions willing to make the commitment to build with stone, and project managers succeeded in recruiting stonemasons from along the East Coast. Fewer than one in three stonemasons who applied was selected because of the quality of the work required.

"They were custom fitting every piece of fieldstone on site as they were building the walls," said John Ziegler, assistant to the vice president for facilities and the project director for Whitman College. "We knew that we wanted to give the artisans an opportunity to work their artistry, but to ensure consistency, we also knew we had to establish some guidelines."

The architects and contractors established a long list of guidelines for setting the stone, including rules for how the five types of stone could be stacked by size and color, limits to the protrusion of the face of the stone to no more than 1 inch, limitations on installing wavy and rippled stones, and ratios for the average of the stone's face width compared to its height.

At the peak of the project, almost 80 stone masons were supported by 70 additional laborers while they worked with more than 6,000 tons of stone.

The University set up a stone blending operation in West Windsor to mix the five types of fieldstone from two quarries in New York. The bluestone used for walkways came from quarries in Pennsylvania, while the limestone was transported from Indiana.

A stone masonry wall will have a life of 300 years or more, Porphyrios said, pointing out that "the achievements of architecture are measured in long strides." Building and architecture always have permanence as their goal because buildings set the stage for daily life, he added.

"The use of stone, timber, metals or plaster has nothing to do with tradition or modernity," Porphyrios said. "I have always found stone more beautiful than concrete or plastics on account of its texture, color variation, the way it breathes, the patina it accumulates over time, etc. A broken reinforced concrete beam is debris, but a broken stone threshold is a ruin."

A dedication ceremony celebrating the opening of Whitman College is scheduled to take place Sept. 26-27, including a public lecture delivered by Porphyrios. He is expected to share his insights about the project with the campus community, local architects and students, including the first student residents of Whitman College.

The college houses approximately 200 freshmen, 100 sophomores, 200 juniors and seniors, and 10 graduate students. It also includes a suite of offices for college staff and faculty advisers, and serves as the home of the Princeton Writing Program. 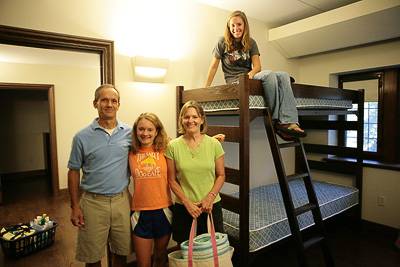