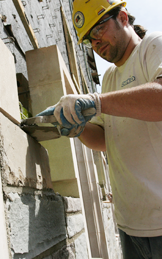 Some 200 workers, including stonemasons, are at work each day building Whitman College, the University's sixth residential college. 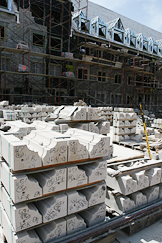 Palettes of limestone are used for accents surrounding the windows.

At left: A view of Whitman College from New South looking east.

On any given weekday, some 200 workers from just about every trade group converge on the site of Whitman College. The University’s sixth residential college is quickly taking shape between Baker Rink and Dillon Gymnasium, involving crews of everyone from carpenters to masons to plumbers.

Stonemasons have been working on the walls since last summer with materials from quarries in Pennsylvania and New York. “We are very happy with the progress of the stone and the aesthetics of the stone,” said John Ziegler, special assistant to the vice president for facilities and project director. “That was one of the biggest challenges on the project, and it appears that we’re going to have a building that is absolutely meeting all the criteria for Collegiate Gothic.”

The 255,000-square-foot facility, designed by Princeton graduate alumnus Demetri Porphyrios and the firm of Einhorn, Yaffee, Prescott, is scheduled for occupancy in fall 2007. Work on the nine structures that make up the college is progressing roughly from north to south, with the slate roof and mahogany casement windows already being installed on the building closest to Dillon Gymnasium. In another couple of months, according to Ziegler, mockup rooms — dormitory rooms fitted with furniture — will be completed in that building, enabling the project team to get a better idea of what’s in store.

In addition to fieldstone, the exterior walls feature limestone as an accent surrounding the windows. The limestone is cut and carved in Indiana and then shipped to campus. “If you walk around the construction site, you’ll see palette upon palette [below left] of limestone,” Ziegler said. “The ends of the limestone have numbers written on them — it’s like a big three-dimensional jigsaw puzzle. Each of those pieces has a specific place to go in the building.” 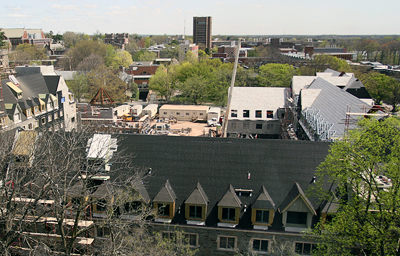 The dining hall on the east side of the complex and a “gatehouse” on the west side will be finished entirely in limestone. “You can see the limestone going up on the gatehouse right now, and it provides significant distinction in appearance from the fieldstone buildings right next to it,” Ziegler said. The gatehouse will contain classrooms, graduate student rooms and singles, and will be connected by a footbridge to Pyne Drive and New South.