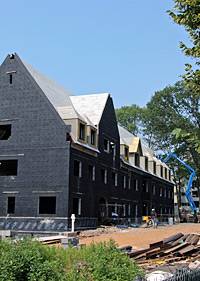 Walls are going up for Whitman College, the University's sixth residential college, and masons are expected to begin erecting the stonework in early July. The 255,000-square-foot structure, designed by Princeton graduate alumnus Demetri Porphyrios and the firm of Einhorn, Yaffee, Prescott, is scheduled for occupancy in fall 2007. 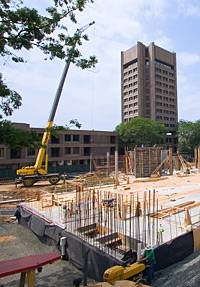 The first-floor slab has been poured for the Lewis Library, which is being constructed on the corner of Washington Road and Ivy Lane. The 87,000-square-foot building, scheduled to be completed in spring 2007, is designed by acclaimed architect Frank Gehry.

Summertime is primetime for construction on the Princeton University campus.

A total of 22 projects are included on a schedule compiled by the Office of Design and Construction in the facilities department.

• Whitman College, the University's sixth residential college, which has begun taking shape between Baker Rink and Dillon Gymnasium. Walls are going up and masons are expected to begin erecting the stonework in early July. The 255,000-square-foot structure, designed by Princeton graduate alumnus Demetri Porphyrios and the firm of Einhorn, Yaffee, Prescott, is scheduled for occupancy in fall 2007.

• The Lewis Library, which is being constructed on the corner of Washington Road and Ivy Lane. The first-floor slab has been poured, and steel erection is slated to begin in November on the 87,000-square-foot Frank Gehry-designed building. Construction is scheduled to be completed in spring 2007.

• Burr Hall, which is undergoing a major renovation that is scheduled for completion in January 2006. The building, which will house the Department of Anthropology, the Program in Latin American Studies and the Princeton Institute for International and Regional Studies, also is being retrofitted with an elevator.

• Clio Hall, one of two distinctive marble buildings south of Cannon Green. Slated for occupancy in September, it will house the offices of the Graduate School and a portion of the undergraduate admission staff following an interior renovation and small addition.

• Jones Hall, which is undergoing a complete renovation. Mechanical space was added in the basement and the outside of the building also was cleaned. Work on the building, which houses the East Asian and Near Eastern studies departments and programs, is expected to be completed by September.

• The Engineering Quadrangle, which is being renovated to include a lobby café in time for the fall semester.

• Holder and Hamilton halls, on the north edge of campus, which are being upgraded as part of the dorm renovation program that began in 1999. The work -- which includes the installation of state-mandated automatic sprinkler systems -- began on Holder last summer and is expected to be completed there at the end of this summer. Although Hamilton has been closed for the past year due to its proximity to Holder, construction on that dorm just started and should be finished by August 2006.

• Lawrence Apartments high-rise, which is getting new kitchen cabinets, bathroom fixtures and heating systems as well as sprinklers. That work should be finished in July.

• Six tennis courts near 1952 Stadium, which are scheduled to be completed by the end of this month. The three hard courts and three clay courts are in addition to nine hard courts completed last summer. The 15 courts replace the Pagoda Tennis Courts, which were cleared for the construction of Whitman College.

• The old "boiler house," now known as 200 Elm Drive, which is being renovated to house Department of Public Safety and part of the facilities staff. The work should be finished by October.