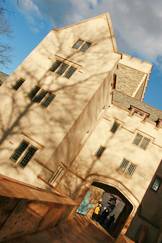 Hargadon Hall will serve as a gateway to Princeton's Whitman College on the west edge, linking by a bridge to the steps near New South and the Dinky station beyond. The Murley-Pivirotto Family Tower, shown above the roofline, provides a prominent landmark for the new residential college, which opens this fall. 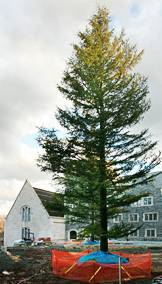 This Cedar of Lebanon was one of two 50-year-old trees recently planted in the north court at Whitman College. When finished, the college's grounds will be landscaped with 200 to 300 trees. 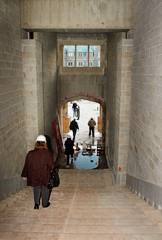 Stairs through the North Hall passageway connect the north and south courts on the east side near Community Hall. 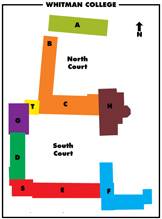 A map of Princeton's Whitman College shows the building names and how the structures are arranged around the two courtyards. 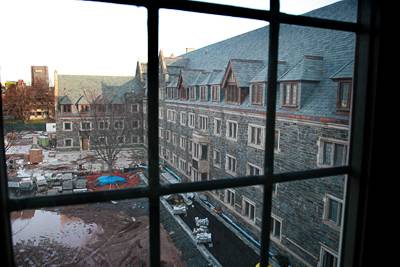 A tour of Princeton's Whitman College that begins with a bird's-eye view from the top floor of Lauritzen Hall (above) reveals the massive scope of this project.

Peeking through a window on the fifth floor of Lauritzen Hall shows the 190-by-200-foot south court. It is bounded by: (see map) 1981 Hall and South Baker Hall on the south side closest to Baker Rink; Lauritzen Hall, Hargadon Hall and the Murley-Pivirotto Family Tower on the west side; North Hall on the north side; and Community Hall on the east side. North Hall, which is shaped in an “L,” also forms the southern and western borders for a second courtyard to the north. Fisher Hall is on the north edge of the complex closest to Dillon Gymnasium.

The college is named for Meg Whitman, president and chief executive officer of eBay and a member of Princeton's class of 1977, and her family.

The exterior of the structure is made of fieldstone and limestone in the Collegiate Gothic style. Finishing touches include slate roofs and 1,500 custom-fabricated, tripled-glazed mahogany casement windows. All buildings will connect at the lower level, and many will connect at other levels. Hargadon Hall will serve as a gateway on the west edge, linking by a bridge to the steps near New South and the Dinky station beyond. 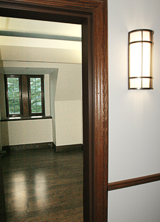 In the fall of 2007, Whitman will house approximately 200 freshmen, 100 sophomores (drawn mainly from Mathey and Butler colleges) and 200 juniors and seniors. In 2008-09, the population of Whitman will stabilize to its "steady state" with approximately 200 freshmen, 200 sophomores and 100 juniors and seniors. The college also will include housing for 10 graduate students.

About 60 percent of the college's rooms are singles, with the rest being predominantly three-room quads. The rooms will have dark oak furniture, floors and trim (at left). Studies, lounges, kitchenettes and laundry facilities will be scattered throughout the buildings, and wireless access for computers will be available. 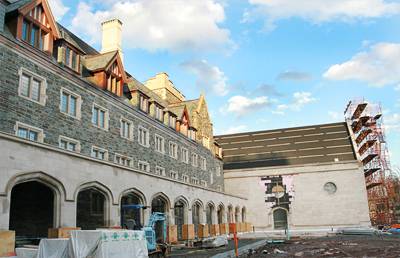 One distinctive feature of the college includes a row of arches on North Hall (above) to be known as "Wright Cloister" in honor of Thomas Wright, a 1962 Princeton alumnus who retired as vice president and secretary in 2004 after more than 30 years as a University administrator. The arches cover the entryway to the college administrative offices and library, which will contain reading tables and alcoves for computers.

The grounds surrounding the college will be landscaped with 200 to 300 trees by the time it is finished, according to James Consolloy, grounds manager. Planting has already begun, with the recent installation of two 50-year-old, 55-foot-tall Cedars of Lebanon in the north court. The landscaping in the north court required 24 feet of fill over the tennis courts that formerly occupied the site as well as specially designed drainage. 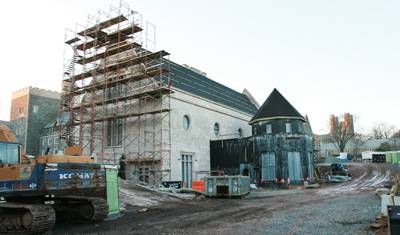 Stairs through the North Hall passageway connect the north and south courts on the east side near Community Hall (above), which will house the college's dining facilities. The main dining room and flanking café (below) will seat 220 and will feature wood-paneled walls, bluestone floors and a decorative fireplace. Two adjacent dining rooms will provide venues for smaller groups: an octagonal room that seats 16 to 24 (at bottom); and a rectangular room that seats 24. The servery will be designed around a cook-to-order format. 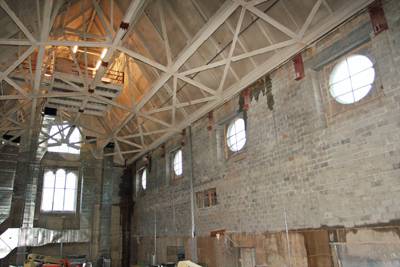 Other amenities that will be in the college include a theater with seating for 65, a dance practice room with mirror, barre and fully-sprung floor, a dressing room, and a common room with comfortable sofas, chairs and tables that opens into a TV room. In order to enhance the integration of residential and academic life, the college also will include a classroom that seats 30 students and several spaces that can be used to conduct seminars.

In addition, Whitman will house the offices and seminar rooms of the Princeton Writing Program.

A festive dedication is being planned for the afternoon of Thursday, Sept. 27. 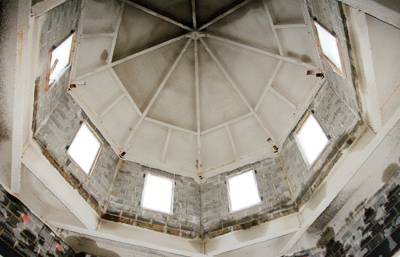