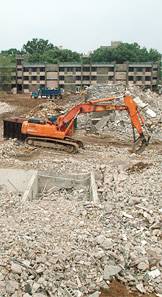 Demolition of five of the Butler College dormitories should be completed by mid-September and will be followed immediately by construction of the new buildings to replace them. All but 400 tons of the 9,000 tons of material produced by the demolition will be re-used or recycled. Photo: David Hunsinger

Top, middle and bottom left: Campus walkways will penetrate the new Butler College buildings and landscape, providing the vistas that are a Princeton trademark. At the lower level, architects plan to fill the space with active communal areas, including a food emporium, common room, classroom and seminar rooms. These spaces will have large windows that look out onto open courts. The new buildings will be constructed of a warm-color brick with horizontal bands of limestone accenting the design and will incorporate several sustainability features, ranging from green roofs to energy efficient building envelopes. Renderings: Courtesy of Pei Cobb Freed & Partners 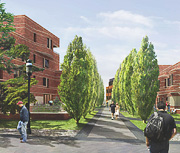 Efforts to raze Lourie-Love, 1922, 1940, 1941 and 1942 halls -- all built in 1964 -- began immediately after Commencement in June. Demolition should be completed by mid-September and will be followed immediately by construction of the new dormitories to replace them, according to Anne St. Mauro, director of design and construction. Wu Hall and 1915 Hall, also part of Butler, remain standing.

The demolition process is expected to produce more than 9,000 tons of material, according to Shana Weber, sustainability manager. All but 400 tons of that material is to be re-used or recycled, including 8,370 tons of concrete, 300 tons of metals and 20 tons of wire and cable.

"Our goal into the future is to find ways to sort the remaining mixed debris more effectively and increase our recycling rate even further," she said.

The Butler project is slated for completion by fall 2009, when the college will join Whitman and Mathey as a four-year residential college. It is part of the University's effort, launched this fall with the opening of Whitman, to revamp its residential system to better serve students as well as to provide them with more options. 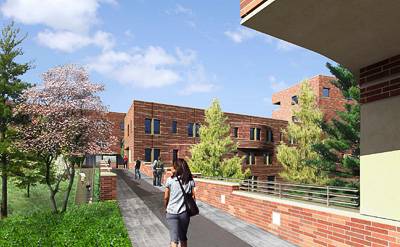 The Butler dorms being demolished contained either singles or one-room doubles -- something viewed as not being conducive to today's residential life. A majority of the new rooms will be suites, with two bedrooms each housing two students, a common area and a bath.

The architect for the project is the renowned firm Pei Cobb Freed & Partners of New York. Henry Cobb, a founding partner in the firm, has designed the new dorms. He also was the architect for the University's Friend Center for Engineering Education, which opened in 2001.

The buildings will have two, three and four stories. They will be constructed of a warm-color brick to harmonize with Wu, 1915 and Bloomberg halls with horizontal bands of limestone accenting the design.

More than half of new dorms will have "green roofs," according to University Architect Jon Hlafter. This environmentally friendly feature involves covering the roof with a waterproofing membrane topped by soil and vegetation. It is intended to reduce heating and cooling loads and decrease stormwater runoff. Once the buildings are up, University officials intend to evaluate the difference in performance between the green and conventional roofs, he said.

Other sustainability features incorporated into the project include an energy efficient building envelope that is 30 percent greater than code requirements, natural light to illuminate 90 percent of interior spaces, and the use of low volatile organic compound (VOC) content materials and water efficient plumbing fixtures.

At the lower level, architects plan to fill the space with active communal areas, including a food emporium, common room, classroom and seminar rooms. These spaces will have large windows that look out onto open courts. Student rooms also will look out onto either a campus walkway or a courtyard, one of which will be irrigated using a rainwater capture and storage system. The walkways will penetrate the college buildings and landscape, providing the vistas that are a Princeton trademark.

During construction, Butler College residents are being housed in 1915, Bloomberg and Cuyler halls and continuing to take their meals in Wu Hall. Bloomberg will remain a part of Butler College after 2009, while Cuyler will revert to being an upperclass dormitory.