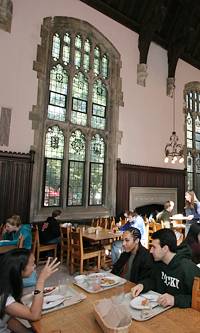 As envisioned by the task force, dining halls in Rockefeller and other colleges would feature a more "homelike, intimate atmosphere."

Below left: The changes in the dining facilities would be part of a transformation in the entire residential college system, which currently includes five two-year colleges. When Whitman College opens in 2007, it will join Mathey and Butler (shown here) colleges in housing students from all four classes. Each of the other three colleges (Forbes, Rockefeller and Wilson) will be paired with a four-year college, and all the colleges will include graduate students in residence.

Bottom left: Mathey College, like other residential dining facilities, currently offers a "scramble" style of service, with specialty bars and short-order grills. To diminish their institutional feel, the college dining venues will be upgraded to a "marketplace" style similar to the Frist Campus Center food gallery, with multiple stations serving more diverse dishes that are cooked to order.

A task force created to examine dining and social life in the residential colleges has recommended a broad series of changes aimed at significantly improving the quality of the food and dining atmosphere in the colleges.

In a report delivered to President Shirley M. Tilghman, the Task Force on Dining and Social Options also recommends strategies to provide greater access to residential college dining facilities through operational changes and a new partnership with the eating clubs.

The task force, consisting of faculty, staff and students, was appointed in spring 2004 by Tilghman to play a key role in planning efforts for the new four-year residential college system. The new system will take effect in fall 2007 with the opening of Whitman College.

"Our goal was to help put forth a series of recommendations that would allow Princeton to supply food of the very highest quality in warm, intimate spaces," Michael Jennings, a German professor who chaired the task force, said in presenting its report at the Oct. 10 meeting of the Council of the Princeton University Community. "The president has envisioned a more fluid, flexible, tolerant social environment, and our task was to think about how the new colleges could be part of that vision."

The task force members spent the past academic year evaluating Princeton's current college dining system to provide insight on how to appeal to more undergraduates, as well as graduate students, faculty and staff. Members visited other colleges and universities around the country to compare offerings. Their work was guided by "the necessity of making recommendations that would promote the integration of the colleges into the wider campus community, forging relationships with existing institutions such as the clubs, the co-ops, dormitories housing independent students, and a wide range of student organizations," according to the report. 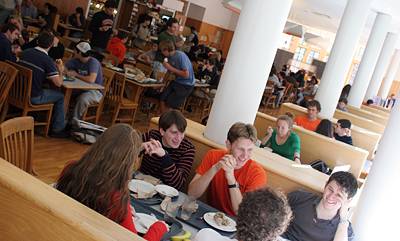 The residential college system, which currently includes five two-year colleges, is being transformed under a plan approved in 2000 by the trustees to increase the undergraduate student body from roughly 4,700 to 5,200. Under the new system, Whitman will join Mathey and Butler colleges in housing students from all four classes, allowing for greater interaction among all students and more participation by juniors and seniors in the colleges' academic, social and cultural offerings. Each of the other three colleges (Forbes, Rockefeller and Wilson) will be paired with a four-year college, and all the colleges will include graduate students in residence.

A key element in the task force's vision for the residential colleges is enhancing the appeal of the dining environment through improved food quality and design of the facilities.

The task force noted that the "homelike, intimate atmosphere" and smaller quantities of food served draws many students to the eating clubs. "The task force is convinced that one of the most important goals in the design of the new college dining facilities is a renewed attention to scale -- the reduction or elimination of the institutional character of the dining experience," the report says.

"As Whitman College is built and planning is undertaken for renovations to the serveries and dining halls of the remaining colleges, the University should insist that the architects and designers responsible for the new dining spaces be especially attentive to issues of scale and warmth," the report says.

To diminish the institutional feel of the dining halls, a "marketplace" design -- similar to the Frist Campus Center food gallery -- has been incorporated into plans for Whitman and for future renovations in the existing residential colleges. The task force endorsed this more open style of service and further recommends that the University hire architectural firms with experience in commercial restaurant settings to oversee the design of the dining halls, noting the need for "high standards in furnishing, lighting, acoustics and ambience."

"Dining spaces that can seat 400 students, with open sight lines, soaring ceilings and geometrically arranged rows of identical … tables are impressive, but they are not conducive to the kind of intimate dining experience envisioned here," the report says. "The architectural firms should be encouraged to explore solutions that allow for smaller dining areas within larger dining halls -- that convey the sense of warmth and intimacy stressed in this report."

To promote individual identities for each of the colleges, the task force recommends a new emphasis on autonomous units in the Department of Dining Services, with each college dining venue run by its own chef with direct responsibility for the menu and budget. Currently, menu development and purchasing decisions are centrally controlled by dining services. The task force envisions a more competitive, creative environment that provides incentives for chefs to devise appealing menu offerings. It also recommends the hiring of chefs with extensive restaurant experience.

"It is essential that the spirit and driving force of a retail operation suffuse every aspect of a newly conceived dining operation at Princeton," the report says. "In the newly conceived dining system in which each unit is a cost center, students must be considered as customers who are able to exercise options regarding where and what they eat. With the introduction of upperclassmen and graduate students and their access to a wide range of dining options, it will have to become clear that these customers, if not satisfied with the food and service in their unit, will take their business elsewhere."

The report cites initial discussions between members of the task force, the administration and representatives of the eating clubs about developing new working relationships. "We believe that a truly significant opening has been forged here, an opening that can be exploited to the advantage of the colleges and clubs alike, but also one that could lead to generally improved relations between the clubs and the University, to the benefit of all concerned," the report says.

The report calls for other major changes to meal plans offered to students based on the idea that "the dining halls should take on the character of the rest of the college facilities: They should afford extensive, trouble-free access to members of the community." Those changes include: expanded late-night meal hours; a faster electronic check-in system; a reduction in the number and variety of meal plans to eliminate confusion; and a revamping of meal plans to "allow for free movement between colleges, clubs, co-ops, independent eating arrangements and retail facilities on campus and in the town."

The task force also proposes expanding the graduate fellow system -- which encourages graduate students to eat in the dining halls -- to all six residential colleges. The system currently exists in four of the five colleges. "Such a system helps address a major concern of many undergraduate and graduate students, who hope to break down perceived divisions on campus," the report notes. In addition to expanding the graduate fellow system, the task force recommends efforts to regularly involve other graduate students in college dining activities to foster a greater sense of community.

The task force also noted the need to provide greater options for students with special dietary needs. Students who eat kosher food can dine at the Center for Jewish Life, for example, but provisions should be made in at least one of the colleges for Muslim students, faculty and staff who follow halal dietary practices, the report says.

A copy of the report is available on the task force's Web site.

The report of the Task Force on Dining and Social Options is one of many elements in the planning for the four-year residential college system. At the CPUC meeting, Dean of the College Nancy Malkiel updated members of the campus community on a series of "brainstorming sessions" held over the summer among administrators and faculty associated with the residential colleges to discuss various elements of college life.

Those meetings, convened by Malkiel and Executive Vice President Mark Burstein, generated numerous ideas that are detailed in a report titled "Creating a New Social Environment in the Residential Colleges." The report is available on the CPUC Web site.

Major themes in the report include the following:

Malkiel said the report will be distributed to students and discussed intensively in the residential colleges and with members of the Undergraduate Student Government, the Undergraduate Life Committee and other students to gather their input during the college planning process.

"Our plan for this fall is to have this document assessed in every venue that we can imagine. … We're going to take stock of what we've heard and decide on the right structures for carrying forward the next part of the conversation," Malkiel said.

Malkiel noted that freshmen and sophomores will be key constituents in these discussions. "The classes of '08 and '09 will be the first upperclass students who will live in these colleges, and their leadership in figuring out how to make these colleges as effective as possible for them and their classmates is front and center," she said.

Task force issues report on University and the eating clubs