Below left: These renderings of the Rockefeller-Mathey dining facilities show the mixed seating (above) that will replace the long rows of large tables in the eating areas as well as the marketplace concept (below) that will be implemented in the serveries.

From the April 3, 2006, Princeton Weekly Bulletin

• Michael Graves & Associates, the Princeton-based firm founded by the Princeton professor emeritus of architecture who won the 2001 American Institute of Architects Gold Medal and also is known for his designs for Target stores.

• Sheila Bridges Design, the New York-based firm that designed the Harlem offices for former President Bill Clinton and his staff; the founder was named "America's Best Interior Designer" by CNN and Time Magazine.

• Mesher Shing, a Seattle-based firm that focuses particularly on food service design and has worked with clients such as Starbucks, Westin Hotels and Resorts and the University of Washington.

"Each of these designers is very different and will give each college its own unique ambience and character," said Chad Klaus, general manager for services in the University's facilities department. 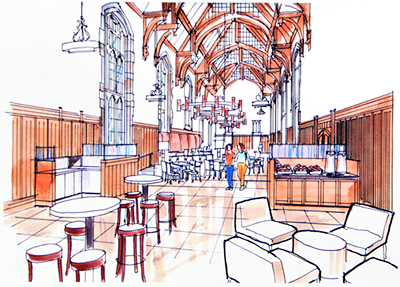 The new college system begins in fall 2007 with the opening of Whitman College and the conversion of Mathey College into a four-year college. Butler College will become a four-year college in fall 2009 after many of the existing Butler dormitories have been torn down and replaced with new construction. Whitman will be paired with Forbes College, Mathey with Rockefeller College and Butler with Wilson College.

As part of the planning process, President Shirley M. Tilghman appointed a Task Force on Dining and Social Options that was chaired by Michael Jennings, professor of German. In fall 2005, the faculty, staff and student group recommended a broad series of changes aimed at significantly improving the quality of the food and dining atmosphere at the colleges.

These recommendations are serving as the basis for the design (in the case of Whitman College) and redesign of the college dining facilities. They include diminishing the institutional feel of the dining halls by creating intimate eating spaces as well as implementing a "marketplace" concept in the serveries featuring a more retail, cook-to-order format.

"Thanks to the efforts of Professor Mike Jennings and his task force, we have a blueprint for Dining Services that will radically improve service and food quality in the residential colleges," said Mark Burstein, executive vice president. "These renovation projects are one piece of this plan, and we are very pleased to have such a talented group of designers working on them."

New furniture, lighting and flooring will help improve the ambience in the halls. The long rows of large tables will be replaced with a mix of booths and tables seating two to eight. Special attention will be paid to acoustics. 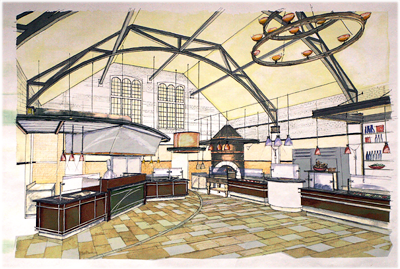 The marketplace design in the serveries will include exhibition-style cooking, intended to increase the freshness of the food and the options available to diners.

Each design firm has been assigned to a specific dining facility: Mesher Shing to Rockefeller-Mathey; Bridges to Whitman; and Graves to Butler-Wilson. Forbes College, which will continue to have its own dining facility, will undergo a modified renovation designed by Debra Barresse, interior design project manager in the Office of the University Architect.

The Rocky-Mathey renovation will take place during the summer of 2007. While the two college dining halls will remain separate, their kitchens and serveries will be merged. Wooden tables and chairs will be replaced with fabric covered banquettes and tables with matching upholstered chairs. Area rugs will partially cover the wooden and marble floors.

The plan for Whitman, currently under construction, features a more contemporary look. The large Collegiate Gothic space will be subdivided using various types of seating, lighting and soft finishes. Carpeting will be interspersed with the bluestone flooring to provide better acoustics. The hall includes two private dining rooms, one rectangular and the other octagonal with a 40-foot ceiling. This project also will be completed by fall 2007.

The Butler-Wilson project will begin in summer 2008 with infrastructure work. The main renovation will take place during the summer of 2009 and be completed by that fall. The kitchens and serveries for the two colleges will be merged. Most of the other renovation will focus on Wilson College's dining facility in Wilcox Hall. Butler's facility is located in Wu Hall, which was built in 1983 and already incorporates many of the proposed features, such as a mix of seating.

The Forbes project will involve renovating the dining hall as well as lobbies and lounges in the dormitory. It will begin in the summer of 2007 and be finished that fall.

The changes in facilities are only part of the improvements scheduled for the dining halls. Other plans center on the variety and quality of the food and access, including: the selection of chef-managers for each venue who will create independent menus for their respective college and exercise greater control over the dining experience; the expansion of dining hours; and the implementation of more flexible meal plans.