During her address at Princeton's 260th Commencement, President Shirley M. Tilghman expressed concern about recent proposals by the U.S. Department of Education that "for the first time in American history" could impose standardized testing on colleges and universities. She said that the best way to measure the value of a college education is not by any standardized test, but by the ways graduates put their degrees to work once they leave the University. Princeton awarded degrees to 1,127 undergraduates and 716 graduate students at the June 5 ceremony.

Top left: A student put her own twist on the traditional graduation garb.

At left: Friends gather to capture the moment.

The Commencement ceremony offered an opportunity for students to reflect on their Princeton experiences as they looked forward to the future. 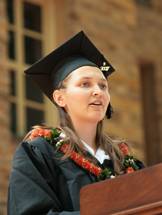 Salutatorian Maya Maskarinec, a classics major from Honolulu, delivered the salutatory address, which at Princeton is traditionally given in Latin and is the University's oldest student honor.     Above left: More than 1,800 undergraduate and graduate degree recipients filled the lawn in front of Nassau Hall for the University's 260th Commencement. 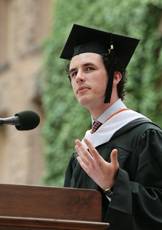 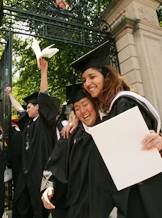 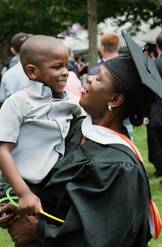 Graduating senior Nicole Scott enjoyed a moment with her cousin after receiving her degree.     At and below left: Students rejoiced with their fellow graduates.

President Shirley M. Tilghman, the 19th president of Princeton, presided over the exercises and addressed graduates. Approximately 7,000 guests attended the morning ceremony on the front lawn of historic Nassau Hall.

During her address, Tilghman expressed concern about recent proposals by the U.S. Department of Education that "for the first time in American history" could impose standardized testing on colleges and universities. She said that the best way to measure the value of a college education is not by any standardized test, but by the ways graduates put their degrees to work once they leave the University.

Looking back on his time at the University, Weyl said, "The purpose of the passion for intellectual inquiry that Princeton gave us is the use of ideas to improve the world we share. In each area of study at this university and in every profession you will enter, there are questions so important that it is, or should be, hard to think about anything else. By making present and immediate in our lives these most important challenges, Princeton has compelled us toward the nation's service and the service of all nations."

Maskarinec delivered the salutatory address in Latin, a Princeton tradition dating to an era when the entire ceremony was conducted in Latin. The Latin Salutatory, Princeton's oldest student honor, began as a serious, formal address, but today it often contains humorous tributes, recollections and a farewell to Princeton campus life.

"As we prepare to scale the walls that surround us and escape into the many worlds that await us, or for the more practically minded, walk through the open FitzRandolph Gate, it is appropriate that we should cast our gaze back to that most hallowed of institutions in which we have squandered our days and years; I refer, of course, not to Princeton University, but to the library of Firestone," she quipped. 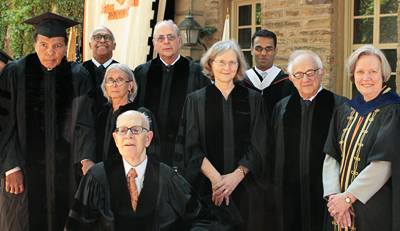 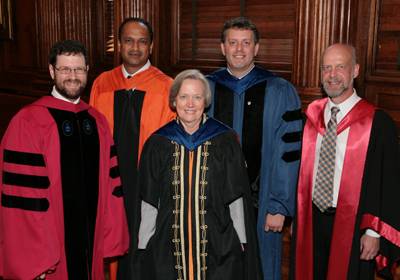 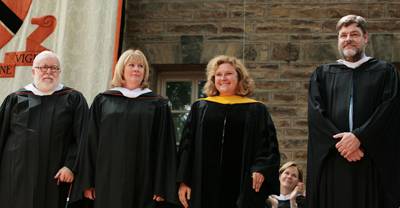 Other honors for the new graduates were presented over the last few days of the academic year. Five graduate students were honored for excellence in teaching during the Association of Princeton Graduate Alumni's Tribute to Teaching Dinner June 1. Seniors were recognized at Class Day ceremonies June 4, where the keynote speaker was Emmy Award-winning actor Bradley Whitford. He discussed how politics has been tainted by show business, and he encouraged the members of the class of 2007 to get involved in world affairs because "we need you."

At the Baccalaureate service on June 3, John Fleming, the Louis W. Fairchild '24 Professor of English and Comparative Literature Emeritus, urged the "Class of Destiny" -- as he dubbed them -- to recognize the privilege of a Princeton education and to use it to improve the world.

Class of 2007 by the numbers:
594 men, 526 women
955 bachelor of arts
165 bachelor of science in engineering
1,120 total class of 2007 undergraduate degrees awarded
7 degrees were awarded to graduates from earlier classes 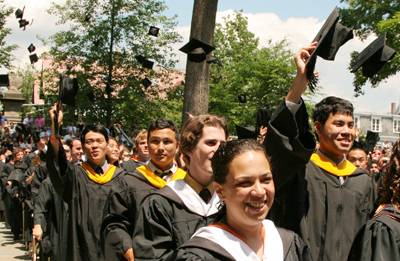