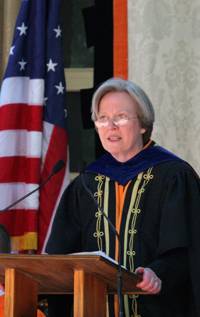 In her Commencement address, President Shirley M. Tilghman encouraged the graduates to draw upon their education to "make this world a safer, more just and more compassionate place for all of its people."

Above left: The University awarded degrees to 1,127 undergraduates and 688 graduate students at its 258th Commencement. 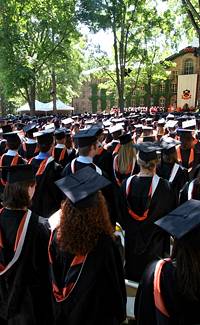 Approximately 8,000 guests joined the 1,814 undergraduate and graduate students receiving degrees at the morning ceremony on the front lawn of historic Nassau Hall. 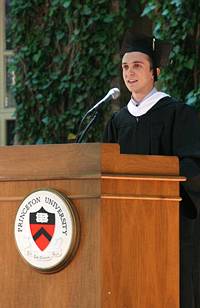 Graham Phillips, a history major from Brookfield, Mass., delivered the salutatory address, which at Princeton is traditionally given in Latin. 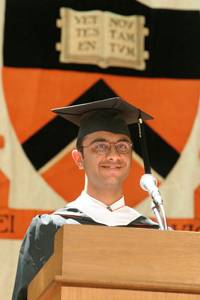 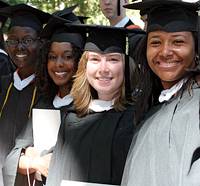 From left, Tolu Onigbanjo, Joanne Coupet, Rebecca Stewart and Erin Langley rejoiced at the conclusion of their undergraduate days at Princeton. 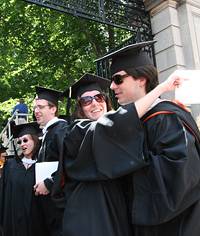 The seniors who graduated from Princeton May 31 and University President Shirley M. Tilghman began their freshman year together.

In her Commencement address, Tilghman, who became the University's 19th president four years ago, reminded the students of their shared experiences and encouraged them to draw upon their education to "make this world a safer, more just and more compassionate place for all of its people."

"Members of the class of 2005, you will always have a very special significance for me, for we began our freshman year together," she said.

"Two days after Opening Exercises our world changed forever when 19 terrorists attacked the World Trade Center in New York City, the Pentagon in Virginia and flew a plane into a field in Pennsylvania," she continued. "The true colors and spirit of the Princeton student body were plainly in evidence in the days following that tragic event. Rather than being paralyzed, you organized blood drives, collected blankets and food, planned events for the children of the families who had lost loved ones, and as is most fitting in a university, you sought ways to understand what had happened by engaging in discussions in seminars, colloquia and classes. I was deeply proud of the way this campus community responded during those dark months in the fall of 2001."

Phadke offered a few "words of wisdom" for the graduates: don't be nervous, appreciate simple things, don't hold grudges, help your friends and always be genuine. He also encouraged them to laugh at themselves.

"Ultimately, we will all make mistakes or meet failure at some point or another, whether in the laboratory, or the office, or the classroom, or on stage," he said. "For instance, the collective typos from all our theses could, in all likelihood, be compiled into an entirely new thesis. How else are we to survive these and other far less serious mistakes if we don't stop to laugh at ourselves? By bringing a refreshed sense of humor to work every day, we not only will have more fun, but we are more willing to try the hardest things again and again."

Phillips delivered the salutatory address in Latin, a Princeton tradition dating to an era when the entire ceremony was conducted in Latin. The Latin Salutatory, Princeton's oldest student honor, began as a serious, formal address, but today it often contains humorous tributes, recollections and a farewell to Princeton campus life.

"We students are deeply indebted to you, the faculty, truly the foundation of our ivy-covered edifice of education," Phillips said. "You cast away the shadows of ignorance, you nurture young minds with the fruit of knowledge, and -- most importantly -- you write our letters of recommendation."

Speaking to the crowd assembled under blue skies on the front lawn of Nassau Hall, Tilghman held up the honorary degree recipients as models for the graduates as they chart their futures.

"This is the reason we award honorary degrees -- to publicly recognize men and women who embody the very qualities of mind and character that Princeton University seeks to develop in all its students," she said. "I would like to take a few moments to reflect on those qualities that I hope you will continue to cultivate once you leave this truly privileged place."

Like Rubin, who has followed her passion for studying the stars, Tilghman encouraged the graduates to "continue to nurture your own unquenchable curiosity and the habit of independent thinking."

She noted that Ma's "cosmopolitanism -- his appreciation that great music knows no geographical boundaries" -- has set him apart, and urged the students to "adopt the perspective of a world citizen, and live your life accordingly."

"D'Harnoncourt's work reminds us that the treasures of the past and the movements that have shaped them should always inform our thinking as we look to the future," Tilghman said.

She characterized Gossman as "the quintessential Princeton faculty member -- one who is able to combine imposing erudition with a devotion to passing on that wisdom to the next generation," adding that graduates planning to pursue academic careers will be following in the footsteps of those "who hold that knowledge is among the most important gifts that one can give another human being."

Describing Soyinka's struggle to survive in a four-by-eight-foot prison cell, Tilghman called upon the graduates to have "the conviction and the courage to take a stand against tyranny and injustice wherever it arises."

Finally, she encouraged the graduates to be guided by the principles and standards -- including integrity -- to which they have been held at Princeton. "You are certain to be tested in little and not so little ways, but as Jack Bogle demonstrates, it is possible to pass these tests with flying colors and still achieve worldly success," she said.

In conclusion, she said, "... as you walk, skip or run -- whatever your preference may be -- through the FitzRandolph Gates today, as educated citizens of this and many other nations, I hope you will carry forward the spirit of Princeton and all that this place has aspired to teach you -- a determination to follow your passions in service to the common good, a respect both for tradition and for progress, an openness to new ideas and a willingness to share them with others, the courage to stand up for your beliefs and the rights of others, a global sensibility, a lifelong devotion to justice and freedom, all informed by the highest standards of integrity and mutual respect. And I fully expect you will continue to do as you have done at Princeton -- to aim high and be bold."

Other honors for the new graduates were presented over the last few days of the academic year. The Association of Princeton Graduate Alumni honored five graduate students for excellence in teaching. Seniors were recognized at Class Day ceremonies May 30, where the keynote speaker was comic actor Chevy Chase.

At the Baccalaureate service on May 29, Nobel laureate and Princeton faculty member Toni Morrison told the students: "There is serious, hard and ennobling work to do, and bit by bit, step by step, you can change the things that need changing."