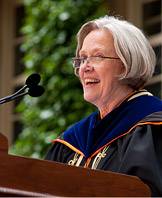 Emphasizing the value of a liberal arts education, Princeton President Shirley M. Tilghman addresses the crowd of 10,000 students and guests assembled on the front lawn of Nassau Hall for the University's 265th Commencement. The University awarded degrees to 1,230 undergraduates in the Class of 2012, five from other classes and 832 graduate students. 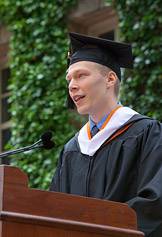 Valedictorian Nathaniel Fleming reminds his classmates that the fundamental lessons they learned at Princeton will serve them well regardless of their ultimate career path. 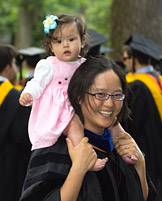 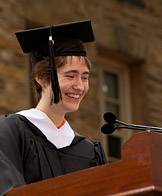 Making a stand for a liberal arts education in today's difficult economic climate, Princeton University President Shirley M. Tilghman urged graduates to bring to the fore the talents they have developed as they embark on the future.

"In a world that is changing as rapidly as ours, developing the capacity to learn new things is as critical as how well you think or how much you know," Tilghman said June 5 in her annual Commencement address. "Your education is the best vaccine I know against early obsolescence."

Speaking to a crowd of approximately 10,000 students and guests assembled on the front lawn of Nassau Hall, Tilghman championed a liberal education in the face of "economic hard times" that "always elicit calls for more goal-oriented education." 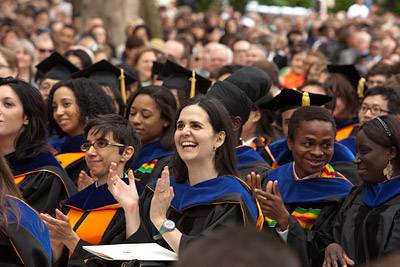 Arguing against efforts to shrink the breadth of higher education, Tilghman maintained that the "kind of thinking" that emphasizes education merely as a means to specific jobs is misguided.

"It is ironic that these calls for more outcome-oriented education in the U.S. come at precisely the moment when other nations are racing precisely in the opposite direction," Tilghman said. "They have taken note of the immense creativity of the American economy over the past 50 years, and have concluded that education in the liberal arts promotes in citizens innovation, independent thinking and the ability to work across disciplinary boundaries."

As other nations have begun to believe that an education that "specializes too early and too narrowly produces well-trained technocrats but very few innovators," Tilghman said she "rejects the notion that a liberal arts degree has suddenly become obsolete." 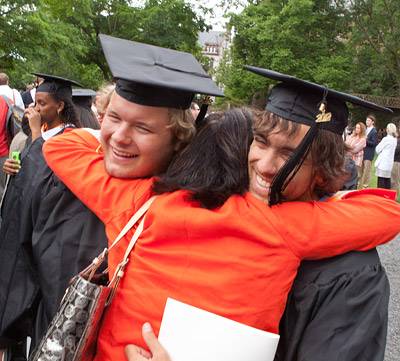 Graduating seniors Dustin Davidson, left, and Paolo Iaccarino get a hug on Cannon Green after the ceremony. (Photo by Denise Applewhite)

Tilghman offered the example of James Madison, a member of the Class of 1771 and the fourth president of the United States, who pursued far-ranging intellectual interests while at Princeton, which she said helped build a foundation for his public career. Tilghman explained that Madison was "a leader in the crusade to found a free and independent nation" and was the author of "a number of the most important documents that guide our nation to this day," including the framework for the U.S. Constitution and the Bill of Rights.

"Without taking anything away from Madison's towering intellect, I would argue that the years he spent at Princeton, engaged in the study of subjects such as mathematics and political philosophy, powerfully prepared him for his life's work," Tilghman said.

She said that Madison's accomplishments at Princeton remain relevant to today's Princetonians. "Just as the nascent United States depended upon well-educated individuals who brought historical perspective, political theory and a sympathy for the complexity of human nature to the task of designing a new nation, both this country and the dozens of others represented on this lawn today need thoughtful, open-minded and well-informed citizens to chart their course and influence their future. No, we are not about to administer the last rites for a liberal education."

Noting that a liberal education is not the "only valuable form of education," Tilghman said that "to be successful in the 21st century, just as in the 18th century, a society requires citizens who are steeped in history, literature, languages, culture, and scientific and technological ideas from ancient times to the present."

She also emphasized that a "liberal education is a privilege that brings with it a responsibility to use your education wisely, as much for the benefit of others in your community and nation and the world as for your own private good."

Concluding the address with her traditional send-off, Tilghman said: "So, as you walk, skip or run through the FitzRandolph Gates today, as citizens of this and many other nations, I hope you will carry forward the spirit of Princeton and the liberal education you have received. The future is now in your hands. And I expect you to do as you have done at Princeton — to aim high and be bold!" 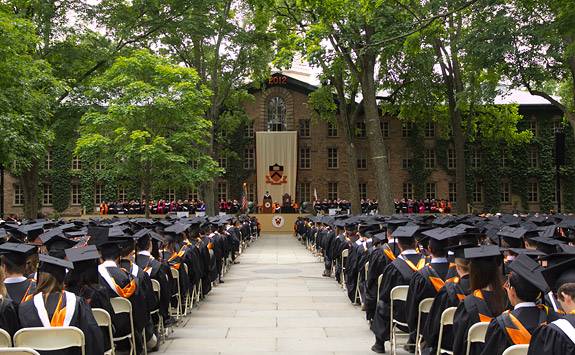 The front campus, facing Nassau Hall, overflows with students in gowns and mortarboards, as they are awarded Princeton degrees and become graduates. (Photo by David Kelly Crow)

Fleming told his classmates that the knowledge they have acquired while at Princeton will prepare them for the future. "Don't just think of yourself as a chemical engineer, as a sociologist, as a consultant; we have lots of those already. We do not have any more of you. Bring your own individual knowledge and experiences to your work," he said. "Think of your Princeton transcript as your fingerprint: Nobody else has the same one, and your complete list of classes — including that random one that you took senior year because it looked like fun — helps define your unique intellectual identity. Use this to your advantage."

Butterworth delivered the salutatory address in Latin, one of her key areas of study. The Princeton tradition dates to the first Commencement in 1748, when the entire ceremony was conducted in Latin. The Latin Salutatory, Princeton's oldest student honor, began as a serious, formal address, but today it often contains humorous tributes, recollections and a farewell to Princeton campus life.

Butterworth honored Princeton as the "best alma mater in the world," noting that "here in your embrace we cultivated virtue, knowledge and friendship." She said: "Be well, my friends. Today we come to a sad parting, but not to the end of our friendships. Daily I will see your images on Facebook! And we will come together again and again at Reunions, so that we may rejoice in Bacchus bringing sweet memories." 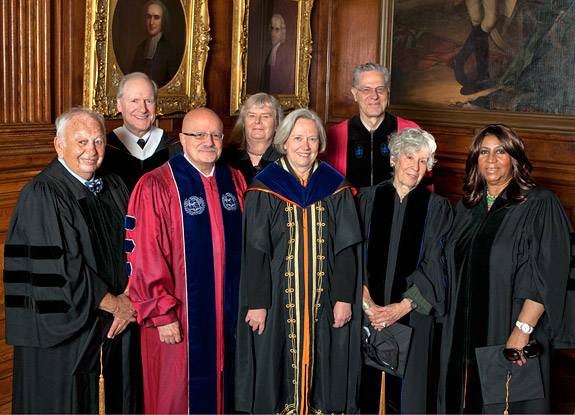 The University awarded degrees to 1,230 undergraduates in the Class of 2012, five from other classes and 832 graduate students at its 265th Commencement. It also conferred honorary doctoral degrees upon six people for their contributions to athletics, music, education, the humanities and science: Peter Carril, basketball Hall-of-Famer and former Princeton coach; Aretha Franklin, the singer known as "the Queen of Soul"; Eduardo Padrón, president of Miami Dade College; Joan Wallach Scott, the Harold F. Linder Professor in the School of Social Science at the Institute for Advanced Study; Joseph Taylor Jr., the James McDonnell Distinguished Professor of Physics Emeritus at Princeton; and Karen Uhlenbeck, the Sid W. Richardson Foundation Regents Chair in Mathematics at the University of Texas-Austin.

As it does each year, Princeton honored excellence in teaching at the Commencement ceremony. Four Princeton faculty members received President's Awards for Distinguished Teaching and four outstanding secondary school teachers from across New Jersey also were recognized for their work. 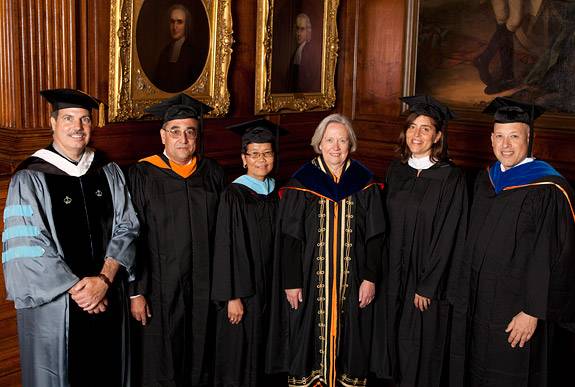 Other honors for students were presented over the last few days of the academic year. Six graduate students were honored for excellence in teaching during the Association of Princeton Graduate Alumni's Tribute to Teaching Reception June 2. Advanced degree candidates participated in the Hooding ceremony in McCarter Theatre on June 4, where the keynote speaker was columnist and author George Will.

In his address, Will, a 1968 Princeton graduate alumnus and a member of the University's Board of Trustees, urged the degree recipients to communicate the value of the academy to broader society, and also to "communicate the sheer fun of the intellectual life." 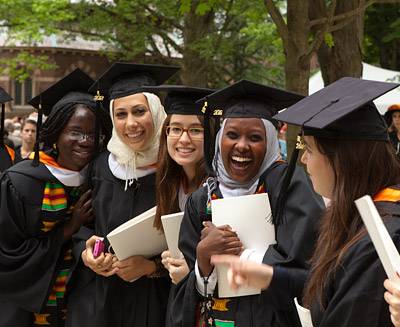 Seniors share a laugh before the start of the Commencement ceremony. (Photo by Denise Applewhite)

Also on June 4, seniors were recognized at Class Day ceremonies, where the keynote speaker was actor and comedian Steve Carell. He lightheartedly lamented the waning of personal interaction in the Digital Age, before closing with some "helpful hints." He said: "Every once in a while, put something positive into the world. We've become so cynical these days — and by 'we,' I mean us. So do something kind. Make someone laugh. And don't take yourself too seriously."

At the Baccalaureate service the day before, author and journalist Michael Lewis, a 1982 Princeton graduate, spoke about how good fortune plays an important role in success. "Life's outcomes, while not entirely random, have a huge amount of luck baked into them," he said. "Above all recognize that if you have had success, you have also had luck — and with luck comes obligation."

Webcasts of Princeton graduation events will be available on the University's WebMedia site. Also available is an interactive photo zoom of the Commencement stage. 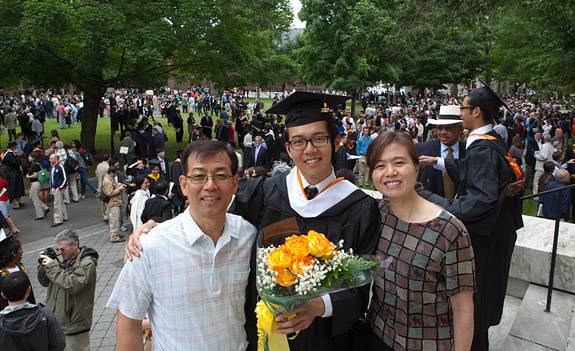 Graduate Eric Kim, center, is joined on the steps of Clio Hall with his father, Youngjun Kim, and his mother, Karen Kim, after the ceremony. (Photo by Denise Applewhite) 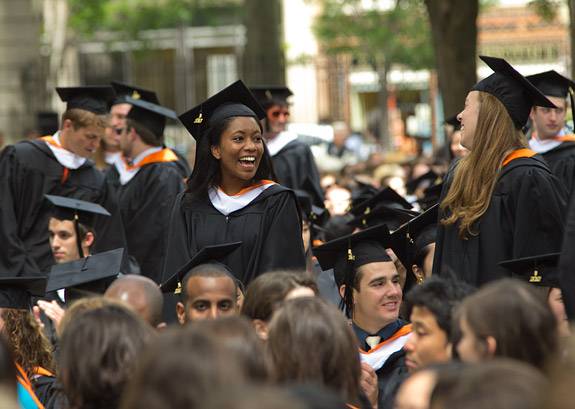 Commencement is the last of the many festivities enjoyed by graduating students. It is an occasion filled with an array of emotions — especially jubilation — as Princetonians connect with each other while looking to the future. (Photo by David Kelly Crow)