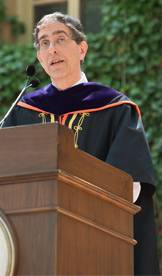 Princeton President Christopher L. Eisgruber addresses the Class of 2014 and their guests at the University's 267th Commencement on Tuesday, June 3, advising graduates to embrace their uncharted futures and encouraging them to continue learning throughout their lives. The University awarded degrees to 1,244 undergraduates in the Class of 2014, seven from other classes and 996 graduate students.

Princeton President Christopher L. Eisgruber addresses the Class of 2014 and their guests at the University's 267th Commencement on Tuesday, June 3, advising graduates to embrace their uncharted futures and encouraging them to continue learning throughout their lives. The University awarded degrees to 1,244 undergraduates in the Class of 2014, seven from other classes and 996 graduate students. 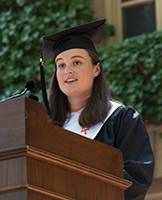 Katherine Pogrebniak, a computer science major from Jacksonville, Florida, gives the valedictory oration, telling her peers that it is their time to "venture into the unknown and create a new path."

Katherine Pogrebniak, a computer science major from Jacksonville, Florida, gives the valedictory oration, telling her peers that it is their time to "venture into the unknown and create a new path." 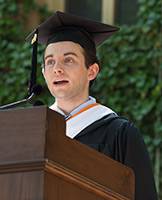 In his first Commencement address as president of Princeton University, Christopher L. Eisgruber advised graduates on Tuesday, June 3, to embrace their uncharted futures and encouraged them to continue learning throughout their lives.

"My colleagues and I could not possibly teach you everything you need to know for your path beyond Princeton. We have not even tried to do so," said Eisgruber, who became Princeton's 20th president on July 1. "But we have tried to teach you how to learn what you need to know to travel that path and to flourish in the places that it takes you. Indeed, the twists and turns in the path beyond FitzRandolph Gate are not only inevitable. They are to be relished. Twists and turns bring discovery, they demand new learning — and that is a good thing."

Speaking to a crowd of about 10,000 students and guests on the front lawn of Nassau Hall, Eisgruber offered the example of an 1879 Princeton graduate, Tommy Wilson, who was adrift after earning his degree and failing as a lawyer. Wilson went back to school, earned a Ph.D. in political science, dropped his first name in favor of his middle name (Woodrow) and became a Princeton professor and University president and the 28th president of the United States, living "a life of leadership, service and consequence."

"There is a lesson for us in this story — and, no, the lesson is not that all of you should start using your middle names. Believe me, my own middle name is 'Ludwig Maria.' Maybe Wilson's change would work for you, but it definitely won't work for me," Eisgruber joked.

He added, "You have emerged from this University with a liberal arts degree that prepares you for the long term — that prepares you to adapt and to confront challenges and to seize opportunities that you may not now be able even to imagine." 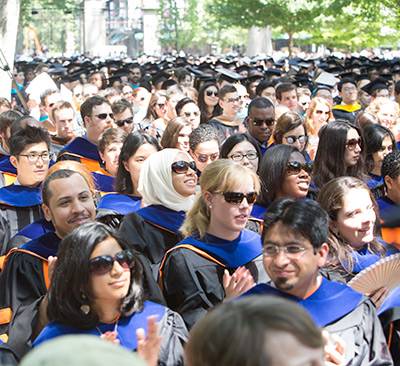 On a warm, sunny day, graduates listen to the Commencement ceremony on Princeton's front campus. (Photo by Denise Applewhite, Office of Communications)

Eisgruber said that Princeton faculty members, like all great teachers, work to inspire a love of learning in their students.

"Even those of us who teach spectacular students like you find ourselves using all sorts of tricks to get your attention and engage your imagination. We will use whatever it takes: provocative questions, fanciful stories, in-class experiments, free food, bad jokes, … dramatic pauses, demonstrative gesticulation," he said, waving his hands.

Eisgruber emphasized that teaching is a personal act built on personal, individual relationships. For that reason, he said, massive open online courses (known as MOOCs) lack the benefits and impact of an in-person learning environment. Because investing in personalized education is expensive, Eisgruber urged students to "become advocates for the kind of personal teaching that has made a difference in your own lives." He said, "As we know from Tommy Wilson's story and your own stories, an investment in the personal art of teaching is one of the best investments that our society, or any society, can make."

Eisgruber said he hoped students would continue to seek out the joy of learning after leaving school. "You will need to sustain the will to learn — you will need, in other words, to find the inspiration to read, the time to think, and the provocation and the energy to break away from the daily routines that enable you to cope with the responsibilities of adult life," he said. "Honoring the value of learning is not always easy, but if you do, it will make your life's journey more fulfilling. Your teachers on this campus have sought to kindle a deep and persistent love of learning within you, and, if you nurture that flame, its glow can illuminate your path and warm your soul."

In closing, Eisgruber wished the graduates well as they began their journeys beyond Princeton's gates, saying: "We send you our heartfelt congratulations, and we will watch your journeys with affection and with pride. We are thrilled that on this auspicious Commencement Day, you are now, and shall be forever into the future, Princeton University's Great Class of 2014. Congratulations and best wishes!" 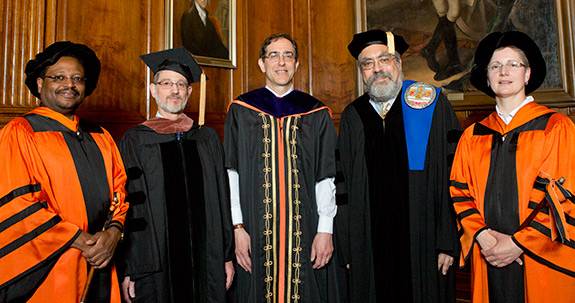 Before the ceremony, Eisgruber (center) meets with the faculty members recognized with the President's Awards for Distinguished Teaching: (from left) Simon Gikandi, Robert Sandberg, Anthony Grafton and Claire Gmachl. (Photo by Denise Applewhite, Office of Communications)

Pogrebniak spoke about the many unknown challenges and choices facing her fellow students. Yet because of the variety of skills each had learned, she said, they were well equipped for their futures. "I am a computer science major, but I am also a mathematician using numerical methods to solve complex differential equations, an artist using creativity to see problems in a new light, a historian learning from my previous mistakes, and an English major looking for incorrect syntax in code," she said. "Princeton has given us the knowledge and self-confidence to be trailblazers. Now it is up to us to venture into the unknown and create a new path."

Iriza delivered the salutatory address in Latin, which he studied intensively in high school. This Princeton tradition dates to the first Commencement in 1748, when the entire ceremony was conducted in Latin. The Latin Salutatory, Princeton's oldest student honor, began as a formal address but today often contains humorous tributes and a fond farewell to Princeton campus life.

Iriza reminisced about the senior class's "shared experiences," such as "fires celebrating our victories in the battles of the game of feet," referring to bonfires held for football wins over Harvard and Yale. Said Iriza, "But most of all, we will remember the bonds we have made with each other." 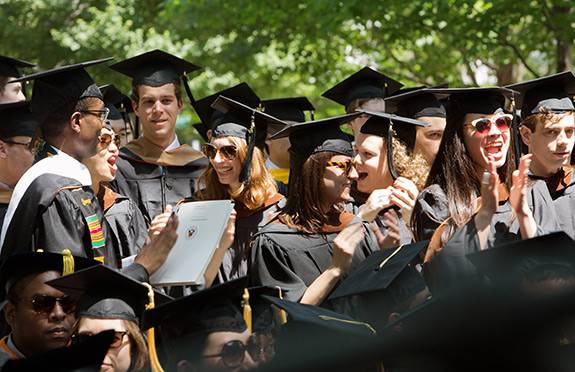 Undergraduates cheer as their names and departments are called, officially conferring their degrees. (Photo by Denise Applewhite, Office of Communications)

The University awarded degrees to 1,244 undergraduates in the Class of 2014, seven from other classes and 996 graduate students at its 267th Commencement. It also conferred honorary doctoral degrees upon five people for their contributions to human rights, public life, business, the humanities, education and engineering: Fazle Hasan Abed, founder and chair of the nongovernmental development organization BRAC; Madeleine K. Albright, former U.S. secretary of state; Herb Kelleher, co-founder of Southwest Airlines; James McPherson, the George Henry Davis 1886 Professor of History, Emeritus, at Princeton; and James West, an inventor and research professor of electrical and computer engineering at Johns Hopkins' Whiting School of Engineering. 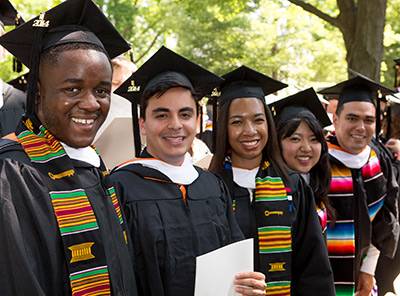 Seniors line up with friends and file onto the front lawn of Nassau Hall for the ceremony. (Photo by Denise Applewhite, Office of Communications)

Students received other honors over the last few days of the academic year. Advanced degree recipients participated in the Hooding ceremony on Cannon Green on June 2, where the keynote speaker was former chairman and CEO of Lockheed Martin Corp. Norman Augustine. Augustine, who holds undergraduate and graduate degrees from the University, told students that Princeton has prepared them to take a leadership role in solving challenges facing today's globalized and quickly evolving world.

"With your new degree each of you is exceedingly well prepared to address both the challenges and opportunities that await you — for indeed you will be entering a world unlike any that has ever been known before," he said. "Furthermore, the world in which you will spend most of your careers cannot even be imagined today. That is why Princeton's focus on fundamentals is so valuable."

Earlier that day, seniors were recognized at the Class Day ceremony, which featured former U.S. Vice President Al Gore as the keynote speaker. Gore told the graduates that they had the power to move society toward confronting the world's biggest challenges, particularly climate change, saying "The will to act is itself a renewable resource."

"Young people who take the time to get a quality education and empower themselves with the kind of skills that you have acquired here at Princeton can change the world," Gore said. "The fact that the world has resisted change thus far is of no import."

Christopher Lu, a 1988 alumnus, deputy secretary of the U.S. Department of Labor, former White House cabinet secretary and assistant to President Barack Obama, spoke at the interfaith Baccalaureate service on June 1, urging students to devote a portion of their lives to public service.

"At its core, public service is a mindset. It is a commitment to address the problems of our time — and not simply pass those problems on to the next generation," Lu said.

Said Lu, "By looking beyond yourself, by understanding how we are all connected as one people, by fighting for greater opportunity for all, and by continuing the legacy of progress that defines our nation, you choose the better history of this proud University and its graduates."

Webcasts of Princeton graduation events are available on the University's Media Central website. 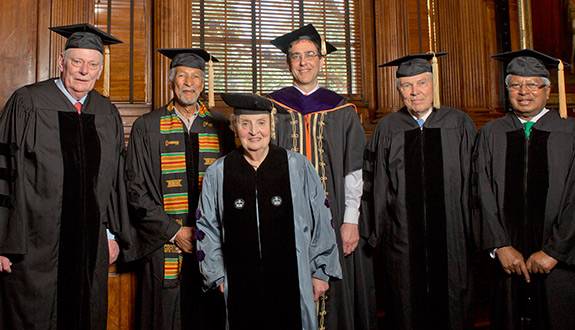 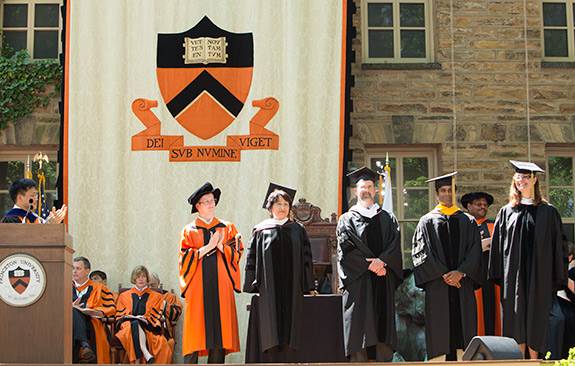 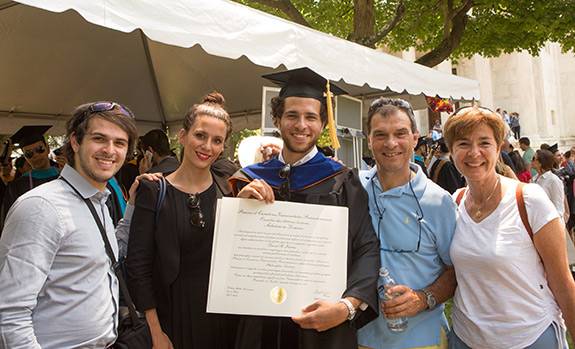 David Kanter (center) and his family celebrate the completion of Kanter's Ph.D. in the Woodrow Wilson School of Public and International Affairs. (Photo by Denise Applewhite, Office of Communications) 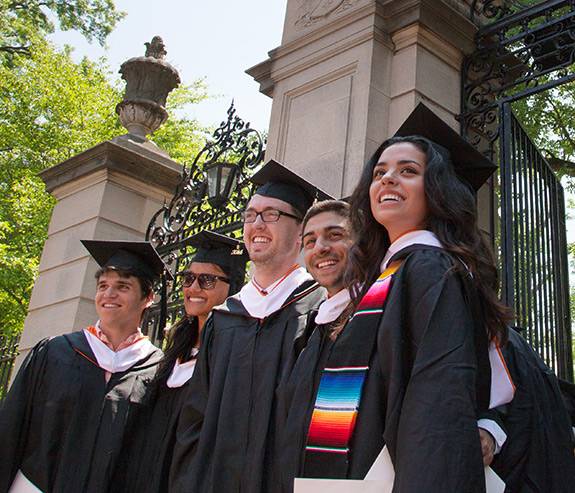 Students pose with friends for photos as they walk out of FitzRandolph Gate as newly minted graduates. (Photo by John Jameson, Office of Communications) 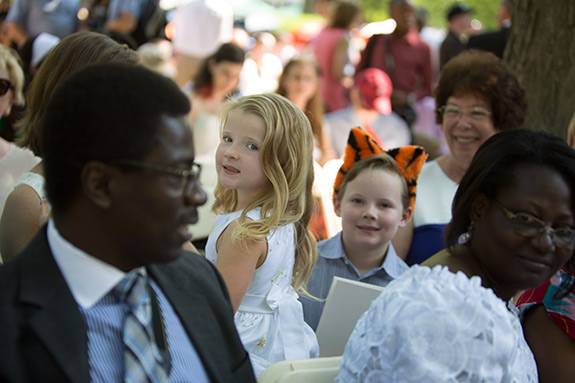 David Parker shows his Princeton spirit while watching the procession with his sister Brooke. (Photo by Amaris Hardy, Office of Communications) 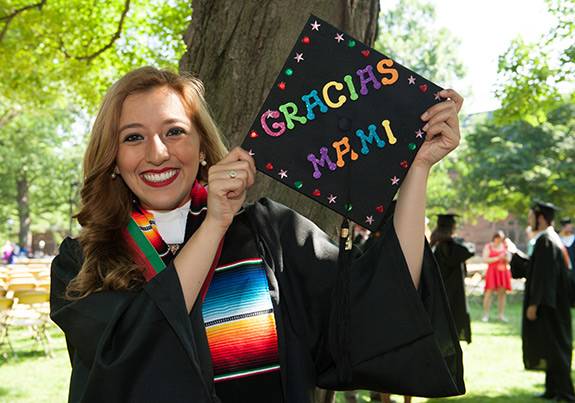 Jenesis Fonseca-Ledezma of the Class of 2014 shows off her mortarboard, decorated to show her appreciation to her mother. (Photo by Mark Czajkowski for the Office of Communications)

2014 President's Commencement Address: 'Life's Journey and the Value of Learning'