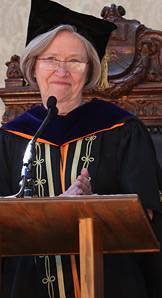 Celebrating the new graduates of Princeton University, President Shirley M. Tilghman presides over the University's 266th Commencement held June 4 on the front lawn of Nassau Hall. The University awarded degrees to 1,261 undergraduates in the Class of 2013, five from other classes and 892 graduate students.

Celebrating the new graduates of Princeton University, President Shirley M. Tilghman presides over the University's 266th Commencement held June 4 on the front lawn of Nassau Hall. The University awarded degrees to 1,261 undergraduates in the Class of 2013, five from other classes and 892 graduate students. 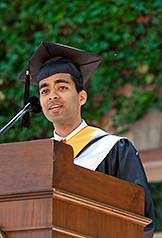 Valedictorian Aman Sinha, a mechanical and aerospace engineering major from Ivyland, Pa., reminds graduating students that there is much to learn after leaving Princeton, such as "how to chase not just success but happiness."

Valedictorian Aman Sinha, a mechanical and aerospace engineering major from Ivyland, Pa., reminds graduating students that there is much to learn after leaving Princeton, such as "how to chase not just success but happiness." 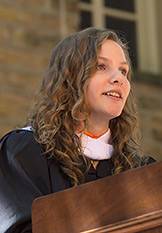 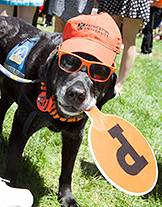 Sajen, a service dog, joins the graduation celebration decked out with Princeton gear.

Sajen, a service dog, joins the graduation celebration decked out with Princeton gear.

In her final Commencement address June 4 as president of Princeton University, Shirley M. Tilghman reflected on the Princeton experience and urged graduates to lead lives of purpose and service.

After serving at the helm of the University since 2001, Tilghman will return to the faculty at the end of this academic year. She will be succeeded by Provost Christopher L. Eisgruber, who will become Princeton's 20th president on July 1.

Tilghman, who received an honorary doctoral degree during the ceremony, said that she, like the graduating students, has been thinking about what she has learned and what she will "take away from this remarkable University." 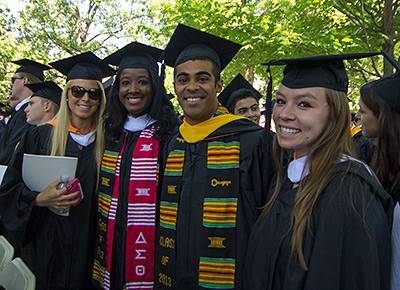 Graduates of the Class of 2013 gather before the start of the ceremony. (Photo by David Kelly Crow)

Speaking to a crowd of approximately 10,000 students and guests assembled on the sun-dappled front lawn of Nassau Hall, Tilghman addressed the new Princeton graduates after conferring their degrees. "You are the beneficiaries of that most distinctive of American inventions — a modern liberal arts education — and you leave here knowing far more about the world in general, and your chosen discipline in particular, than when you arrived," she said.

Whether a "dancer who studied physics" or an "accredited civil engineer inspired by green technology" or "a chemist resolved to cure cancer," all Princeton students have absorbed the value of learning, Tilghman said.

"Your education has not so much given you all the answers as it has taught you to ask the right questions," she said. "It has given you a thirst for free inquiry and the nimbleness of mind to cut through complexity to the insights within. It has given you a powerful voice to make your case and the intellectual confidence to change your mind. And it has exposed you to the staggering breadth and richness of your own and other societies around the world. It is the best preparation I can imagine for the rest of your life." 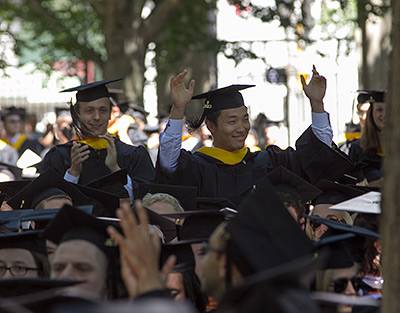 Students stand up and cheer as their academic departments are recognized. (Photo by David Kelly Crow)

The Princeton experience extends far beyond the classroom, Tilghman said, emphasizing how much students learn by being members of a "close-knit community living and working and playing on this beautiful and cherished campus."

Quoting Nobel laureate and Princeton emerita professor Toni Morrison's address at the University's 250th anniversary celebration in 1996, Tilghman said that Princeton's " ... strength is knowing what its founders knew, that service to the individual, to the government, to the world requires unwavering commitment to intellectual freedom, [and] a fierce commitment to virtues already being debased by apathy: virtues such as integrity and honor and fair play and courage."

"The key word here is 'service,'" Tilghman said, stressing that "with the privilege of a liberal arts education . . . comes an obligation to pursue a life that is larger than you, to be in the service of this and all nations."

In asking the graduates to "affirmatively make a choice to serve," Tilghman quoted another speaker at Princeton — Amazon founder and CEO Jeff Bezos, a member of the Class of 1986, who gave an address at Baccalaureate in 2010. Tilghman said that among his questions offered as a "touchstone to guide those choices" were:

"Will inertia be your guide, or will you follow your passions?"

"Will you choose a life of ease, or a life of service and adventure?"

"Will you wilt under criticism, or will you follow your convictions?"

"Will you be clever at the expense of others, or will you be kind?"

In closing, Tilghman gave her traditional send-off one last time: "As you pass proudly through the FitzRandolph Gate today, as citizens of this and many other nations, I hope you will carry forward the spirit of Princeton and make use of the education you have acquired here.

"And, as I have instructed graduates for the last 12 years, I fully expect you to do as you have done at Princeton — to aim high and be bold!" 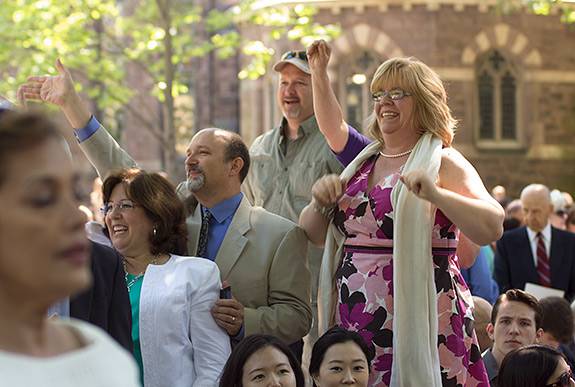 A crowd of approximately 10,000 students, families and friends attended Princeton University's Commencement on Tuesday, June 4. Families watched the students process through the front of campus at the start of the ceremony. (Photo by David Kelly Crow)

Sinha told his classmates that all their experiences at Princeton "will collectively help us in some inchoate way" and that while they have learned many lessons, there are many more to come. "Learning how to embody not just intelligence but also virtue, for example, or learning how to chase not just success but happiness: many of these lessons we will have to teach ourselves, and some we will only learn after we walk out FitzRandolph Gate," he said.

Bensch-Schaus delivered the salutatory address in Latin. This Princeton tradition dates to the first Commencement in 1748, when the entire ceremony was conducted in Latin. The Latin Salutatory, Princeton's oldest student honor, began as a formal address but today often contains humorous tributes and a fond farewell to Princeton campus life.

Bensch-Schaus thanked Tilghman for tending to her "final flock" and honored the gathered professors and parents. In closing, she said: "Once we entered these very gates as sheep, but now we will emerge from these same gates as men and women unafraid of hungry wolves and fierce storms; we will emerge as tigers of Princeton." 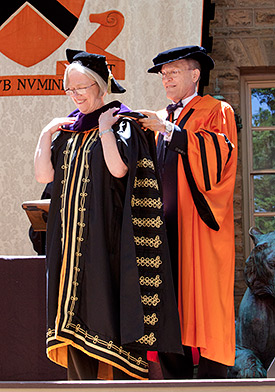 Douglas Clark, chief marshal for University convocations, places an academic hood on Tilghman as she receives her honorary doctoral degree from Princeton. (Photo by Denise Applewhite)

The University awarded degrees to 1,261 undergraduates in the Class of 2013, five from other classes and 892 graduate students at its 266th Commencement.

In a surprise announcement not printed in the day's program, Tilghman was recognized for her leadership as president and was conferred an honorary doctoral degree by Kathryn Hall, chair of the Board of Trustees. Tilghman received a standing ovation when the degree was given. The University also conferred honorary degrees upon five individuals for their contributions to architecture, literature, the humanities, human rights, medicine and science: Francis Collins, director of the National Institutes of Health; Lorraine Daston, executive director of the Max Planck Institute for the History of Science, Berlin; Frank Gehry, world-renowned design architect; Toni Morrison, the Robert F. Goheen Professor in the Humanities Emeritus at Princeton; and Sakena Yacoobi, executive director of the Afghan Institute of Learning. 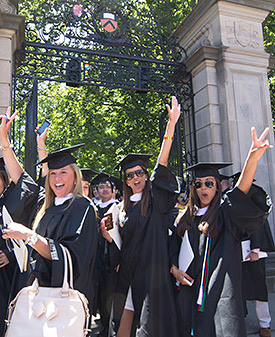 Commencement is the last of the many festivities enjoyed by graduating students as they leave Princeton as alumni. (Photo by David Kelly Crow)

On June 3, seniors were recognized at Class Day ceremonies, where the keynote speaker was editor of The New Yorker David Remnick, a member of the Class of 1981. He exhorted the graduating class to meet the "demands, the responsibilities, that freedom asks of you." He said: "But you came here not merely to set out on a trade or profession, but to exercise the freedom of your minds. You're needed in the larger world — and not merely to shop and take up space. The stakes are huge. The project of building a free society isn't something you can farm out to the experts. You must, in some way, play your part."

Five graduate students were honored for excellence in teaching at the Association of Princeton Alumni's Tribute to Teaching Reception June 1. An afternoon thunderstorm disrupted the Hooding ceremony for advanced degree candidates on June 3, moving the students indoors to Whig Hall, where they received their hoods. The keynote speaker was author and entrepreneur Sheryl WuDunn, a 1988 graduate alumna.

At the Baccalaureate service June 1, Ben Bernanke, chairman of the Board of Governors of the U.S. Federal Reserve and former chair of the economics department at Princeton, offered suggestions and observations for the graduating students. He said: "Whatever life may have in store for you, each of you has a grand, lifelong project, and that is the development of yourself as a human being."

Webcasts of Princeton graduation events will be available on the University's WebMedia site. 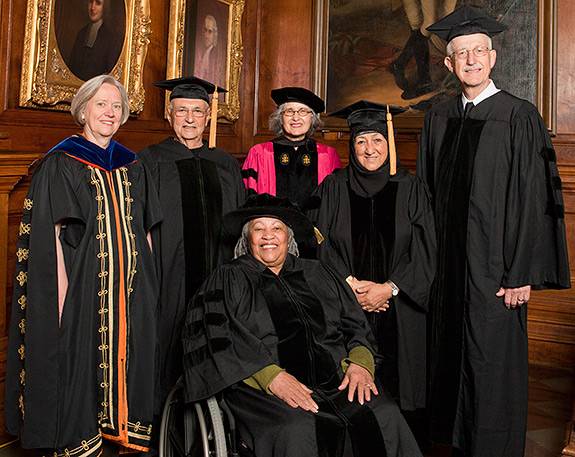 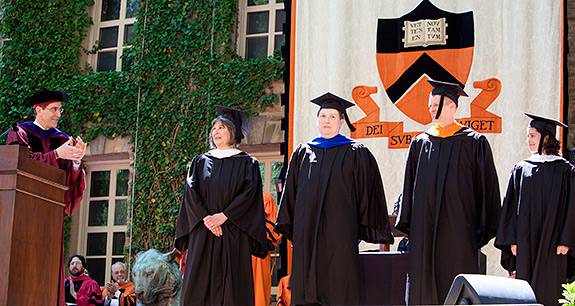 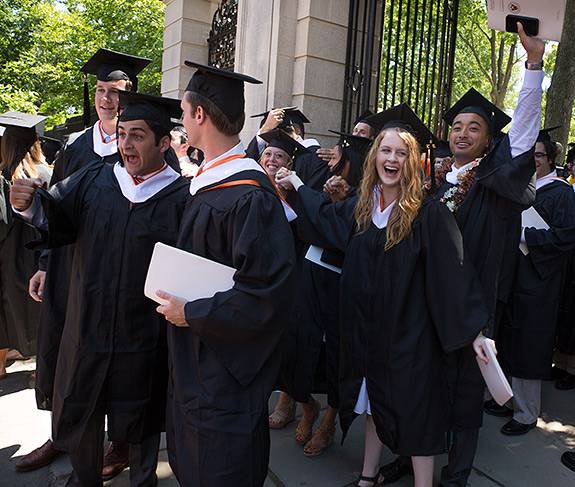 Graduates stream through FitzRandolph Gate after the Commencement ceremony, jubilant and full of anticipation for the future. (Photo by John Jameson) 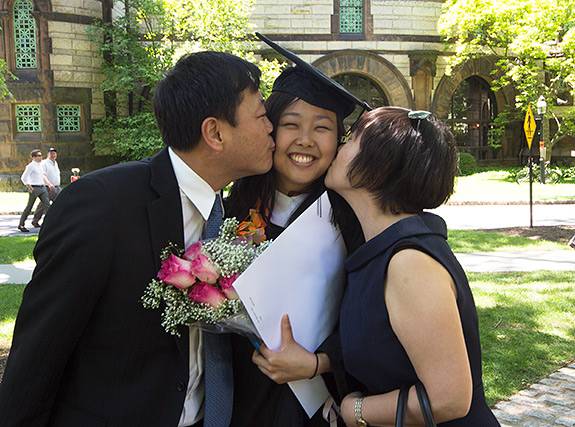