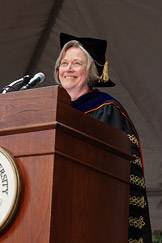 Calling for more respectful debate and discussion in today's "increasingly polarized world," Princeton President Shirley M. Tilghman addresses the crowd of 7,500 assembled on the front lawn of Nassau Hall for the University's 263rd Commencement. The University awarded degrees to 1,166 undergraduates in the class of 2010, nine from other classes and 804 graduate students.

Play a video celebrating the class of 2010. 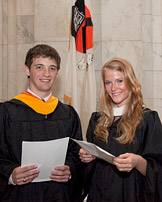 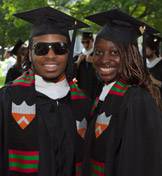 Danny Scotton and Alima Kamara share memories as they prepare for the 2010 Commencement procession to begin. (Photo: Brian Wilson) 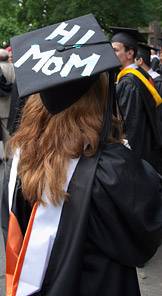 One student keeps her family in mind during Commencement. (Photo: Denise Applewhite) 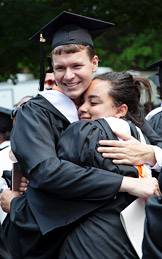 In today's environment of easy access to politically charged sound bites, Princeton President Shirley M. Tilghman urged graduates to find common ground with others for the civil discourse needed to bring about change.

"As I think about the world that you are about to enter, it seems to me that effecting change has never been harder," she said June 1 in her annual Commencement address. "We are living in an increasingly polarized world, in which discussion and debate -- those critical ingredients for creating fertile ground for change -- have become sharper and far more likely to result in impasse than in consensus."

Speaking to the crowd of 7,500 assembled on the front lawn of Nassau Hall, she added, "Politics has never been for the faint of heart, and never more so than today. Everyone has taken sides, retreated to his or her respective corner, and tuned into the cable networks where they will have their opinions confirmed, or logged into the Internet bloggers who reinforce rather than challenge those opinions." 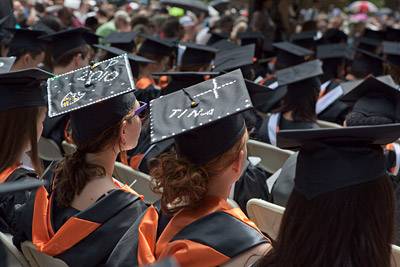 Some national leaders are speaking out for a different approach, Tilghman said, citing former Congressman Jim Leach, a 1964 Princeton alumnus and now the chair of the National Endowment for the Humanities. Leach has been on a nationwide tour calling for civil discourse and expressing the dangers of polarization in the political sphere.

But all too often, Tilghman said, people look to the opinion that bolsters their own views -- including when it comes to media sources. "Whether you tune into Rachel Maddow and Keith Olbermann on the left or Glenn Beck and Rush Limbaugh on the right, or look to Jon Stewart and Stephen Colbert to simply laugh at it all," she said, "there is little doubt that the trend of framing national issues in the language of black and white; either/or; good guys and bad guys has created a downward spiral in the tone of our political discourse." 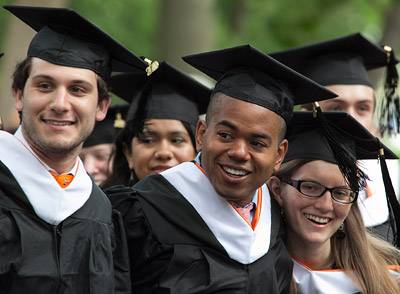 Tilghman said, "One aspect of keeping democracy alive and well is seeking common purpose and finding common ground with one another. Your Princeton education is intended to help you develop the character and habits of mind for you to do this. On our campus you have been exposed to a rich smorgasbord of ideas, perspectives and cultures, both inside and outside the classroom. … You were asked to acquire learning so that you would have the intellectual foundation to engage with the great ideas and pressing issues of the day. … And through these encounters, you have had a unique opportunity to hone your own perspective on the world."

She said Princeton students come into contact with a variety of viewpoints, not only through the faculty and the curriculum, but also through their classmates, who come from around the globe.

"The powerful lessons you take away from your Princeton education are learned as often on the playing fields and performance stages, in dining halls, dorm rooms and eating clubs as in the classroom or laboratory," she said. "It is much harder to throw epithets at a group when the group has the human face of your friend or classmate. By living and studying together, you are able to see beyond difference to the common humanity that binds us together."

In conclusion, Tilghman said, "As you walk, skip or run through the FitzRandolph Gates today, as educated citizens of this and many other nations, I hope you will carry forward the spirit of Princeton and all that it has sought to teach you -- an openness to the other point of view and the courage to stand up for what you believe, all informed by the highest standards of integrity and mutual respect. And I expect you will continue to do as you have done at Princeton -- to aim high and be bold!" 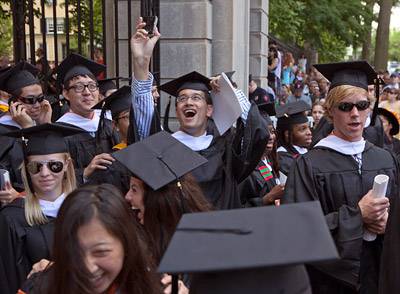 This graduate captures his own moment of celebration as he and his classmates exit FitzRandolph Gates after the ceremony. (Photo: Brian Wilson)

Karp told his classmates that they should consider themselves people first and scholars second. "The scholastic achievements of our class are well documented, and I am certain that the intellectual challenges that we as a class will take on and solve will be numerous," he said. "But our time here has prepared us to handle far more than just academic pursuits, and our talents and passions clearly reflect this. Now that we have all successfully run the great intellectual gauntlet that is the Princeton undergrad experience, I hope that all of you will continue to seek out things that challenge you not just as a lawyer or a teacher or a hockey player, but as a person."

Colson delivered the salutatory address in Latin, one of her key areas of study. The Princeton tradition dates to an era when the entire ceremony was conducted in Latin. The Latin Salutatory, Princeton's oldest student honor, began as a serious, formal address, but today it often contains humorous tributes, recollections and a farewell to Princeton campus life. 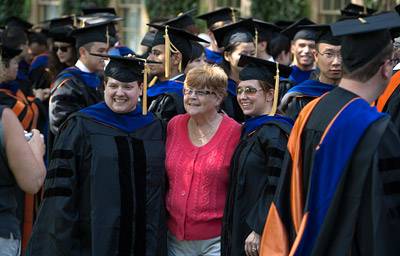 Graduate students memorialize their friendship by posing with family members before the bell tolls to begin the Commencement procession. (Photo: Brian Wilson)

"At the outset of our freshman year, President Tilghman, you told our class, 'Past is not prelude,'" Colson said. "Looking to the past we find not inflexible precedents or prerequisites, but opportunities to transform the institutions we hold dear and to create new traditions to carry us into the future. … Eo Ipso [by that very fact], Princetonians, as you go forth, see, conquer and imbibe, may you be always faithful to the traditions your success is built upon. Remember, though, to make them new and to make them you."

The University awarded degrees to 1,166 undergraduates in the class of 2010, nine from other classes and 804 graduate students at its 263rd Commencement. It also conferred honorary doctoral degrees upon five individuals for their contributions to the humanities, law, medical and scientific research and human rights: Drew Gilpin Faust, a historian and the president of Harvard University; Ruth Bader Ginsburg, a U.S. Supreme Court justice and trailblazer for women's rights; Olufunmilayo Olopade, a medical researcher who focuses on cancer risk assessment; Albie Sachs, a champion of human rights in South Africa; and Edward Taylor, Princeton's A. Barton Hepburn Professor of Organic Chemistry Emeritus.

As it does each year, Princeton honored excellence in teaching at the Commencement ceremony. Four Princeton faculty members received President's Awards for Distinguished Teaching, and four outstanding secondary school teachers from across New Jersey also were recognized for their work. 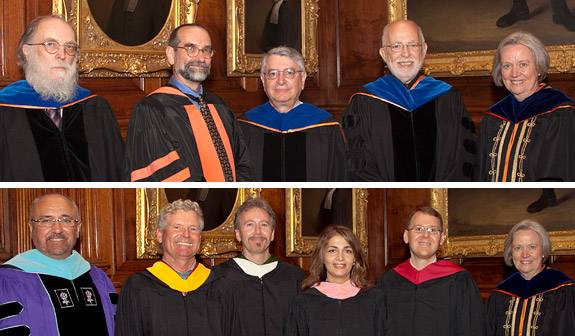 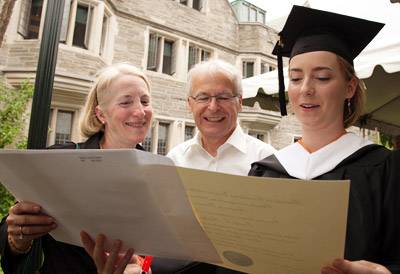 Emily Sandys, who received a bachelor of arts degree in politics, looks over her diploma with her parents, Barbara and Peter, at Mathey College. (Photo: Denise Applewhite)

Other honors for students were presented over the last few days of the academic year. Six graduate students were honored for excellence in teaching during the Association of Princeton Graduate Alumni's Tribute to Teaching Reception May 29. Advanced degree candidates participated in the hooding ceremony at McCarter Theatre on May 31.

Also on May 31, seniors were recognized at Class Day ceremonies, where the keynote speaker was Charles Gibson, a 1965 Princeton alumnus and former anchor of ABC's "World News." In an address that was at times humorous, but mostly earnest, he said, "It is old-fashioned, but I will tell you there are ethical imperatives in this life -- compassion, honesty, fairness, trustworthiness, a respect for others. … If you don't possess these basic qualities, no one will know it better than you do yourself. And if you don't admire yourself as a person, frankly, in the long run, you won't matter." 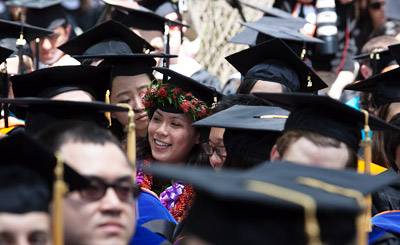 A student celebrates her culture by adorning her gown with traditional flower leis. (Photo: Denise Applewhite)

At the Baccalaureate service the day before, Jeff Bezos, a 1986 Princeton alumnus and founder and chief executive officer of Amazon.com, spoke. He made an impassioned plea to the graduating seniors to pay close attention to the choices they make in life, as they will dictate not only success, but happiness: "When you are 80 years old, and in a quiet moment of reflection narrating only for yourself in the most personal version of your life story, the telling that will be the most compact and meaningful will be a series of choices you have made."

Students celebrate after officially being designated as graduates at the ceremony, with some tossing their caps into the air. (Photo: Denise Applewhite)