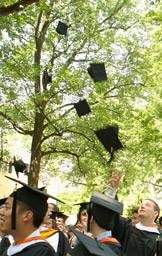 Students tossed their caps into the air after officially being designated as graduates at the University's 261st Commencement. Princeton awarded degrees to 1,125 undergraduates and 743 graduate students during ceremonies Tuesday, June 3, on the front lawn of Nassau Hall. (Photo: Brian Wilson) 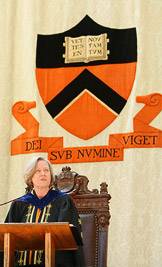 Using Princeton alumnus and president emeritus Robert F. Goheen as an example, President Shirley M. Tilghman told the graduates that they should not only expect to adapt to change, they should plan to lead change. (Photo: Brian Wilson) 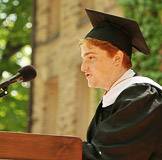 The valedictory oration was delivered by Zachary Squire, a classics major from New York City, who thanked his classmates for the memories. (Photo: Brian Wilson) 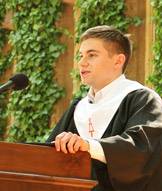 Salutatorian James Morrison, a chemical engineering major from Kensington, Md., delivered the salutatory address, which at Princeton is traditionally given in Latin and is the University's oldest student honor. (Photo: Brian Wilson)

President Shirley M. Tilghman told graduates June 3 that their Princeton education -- with its "powerful combination of breadth and depth" -- is their best preparation for a world in which the one constant is change.

She illustrated her annual Commencement address by citing examples from Princeton graduate Robert F. Goheen, who served as president of the University from 1957 to 1972 during a period of transformative growth and change. Goheen died earlier this year at age 88. 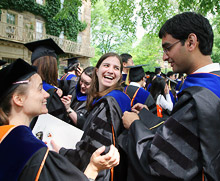 From left, Pauline LeVen, who was awarded a Ph.D. in classics, shared a laugh with Ty Wilde and Vinayak Tripathi, who both received Ph.D.s in economics. (Photo: John Jameson)

"Bob Goheen is an exemplar of the Princetonian who did not simply adapt well to change, but was able to lead change when it mattered most," she added.

Goheen earned his bachelor's degree from Princeton in 1940 after winning the Pyne Honor Prize, the highest general distinction conferred upon undergraduates. He enrolled in Princeton's Graduate School; however, his work was interrupted by his induction into the Army. He re-enrolled after World War II, earned his Ph.D. and was named an assistant professor in 1950.

In 1956, trustees selected him to become Princeton's 16th president. When he assumed office on July 1, 1957, he was the third youngest president in the University's history at age 37. During his tenure Princeton became coeducational, increased its ethnic and racial diversity, and coped with protests against the war in Vietnam. 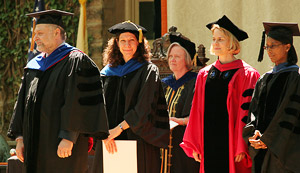 In her address, Tilghman reflected on these milestones "when Bob Goheen's openness to other viewpoints and willingness to change his mind were instrumental in his effectiveness as a leader."

Initially, she pointed out, he was against the admission of women undergraduates. "When asked … why he had changed his mind about coeducation, Bob said simply, 'Because I was wrong! ... What you want to do when you have made a mistake is admit it, explain your reasoning and move on.'" 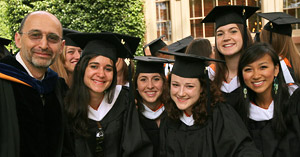 Tilghman then quoted from Goheen's Alumni Day address in 1969, the year women would first be admitted as regular members of the undergraduate student body: "While it has proved a most complex matter, the essential question is not hard to identify. It is whether the education we offer -- not just the social conveniences -- will be better if both men and women take part. It has become increasingly clear to us that it will -- that it will make for a richer and more relevant educational experience at Princeton in the years ahead."

She went on to cite Goheen's leadership on issues related to race, drawing from a 2004 oral history project in which Goheen said he became increasingly aware of these issues through students who were working to desegregate the South. She said he also recognized that Princeton's record of admitting students of color was "downright dismal." 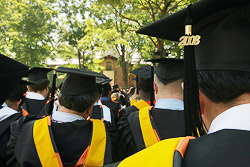 The class of 2008, designated by the tassel on the hat, listened to the addresses during the Commencement exercises. (Photo: John Jameson)

Tilghman quoted from Goheen's 1962 Commencement address, in which he said: "The denial of human dignity and equal rights on the blind basis of color or creed is an abomination of our time and cancer in our society. Distinctions which unfairly curb the inherent potentials of individuals or groups are the direct antithesis of the aims of higher education."

"In a few short years," Tilghman said, "the two men transformed the landscape for students of color at Princeton, created the forerunner of the Carl Fields Center, and changed the University, as we see today, very much for the better."

Tilghman's third example centered on Goheen's response to campus protests against Vietnam War. She commended him for focusing attention on what the University could control and for encouraging students to channel their energy in constructive ways. 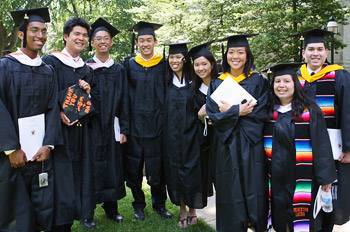 "Princeton weathered the storms with its dignity and its civility intact, largely because of Bob Goheen," she said. "I recently compared him to Abraham Lincoln, in the sense that his greatness was partly due to his own inherent qualities of intelligence, open-mindedness and integrity, and partly due to the turbulent times through which he lived. Like Lincoln, he did not simply endure those times, he provided inspired leadership at a point when it was desperately needed. His calm willingness to listen at large University gatherings where students and faculty vented their fury and frustration at events outside their control; his defense of their right to dissent but his opposition to all forms of coercion defused what could have been incendiary moments."

Tilghman encouraged this year's graduates to draw on their Princeton education and to model themselves after Goheen as they make their way in the world. 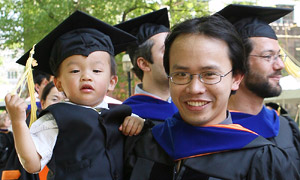 Oki Gunawan, who was awarded a Ph.D. in electrical engineering, recessed with his son, Nathanael, who is 3. (Photo: Brian Wilson)

"His strengths as a leader were embedded in the qualities we hope to have instilled in each of you -- an open-mindedness to new evidence that allows for the possibility that your original impressions were wrong, coupled with the courage to say so out loud; the habit of listening to and learning from the views of others, particularly those with whom you deeply disagree; the capacity to speak the truth as you understand it; a willingness to hold your ground against fierce opposition; a deep respect for learning as opposed to uninformed opinion; and the strength that grows out of humility and compassion for human shortcomings," she said. 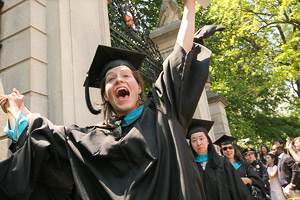 Nealin Parker rejoiced after receiving her master in public affairs degree from the Woodrow Wilson School of Public and International Affairs and walking through FitzRandolph Gates. (Photo: John Jameson)

In conclusion, Tilghman said, "As you walk, skip or run through the FitzRandolph Gates today, as educated citizens of this and many other nations, I hope you will carry forward the spirit of Bob Goheen and his beloved Princeton. And I expect you to continue to do as you have done at Princeton -- to aim high and be bold."

Looking back on his time at the University, Squire told his classmates, "It is you, the great class of 2008, who have given me what is most memorable and valuable that I will take away from Princeton, and I wish you all the best of luck and the greatest success."

Morrison delivered the salutatory address in Latin, a Princeton tradition dating to an era when the entire ceremony was conducted in Latin. The Latin Salutatory, Princeton's oldest student honor, began as a serious, formal address, but today it often contains humorous tributes, recollections and a farewell to Princeton campus life. 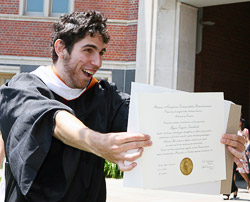 It’s official! Ryan Truchelut, a member of the class of 2008, celebrated the receipt of his diploma at Butler College. (Photo: Brian Wilson)

"… let us thus go forth to seize the day," Morrison said. "Let us lead happy and rich lives, and may we do good for this nation and all nations."

Other honors for the new graduates were presented over the last few days of the academic year. Six graduate students were honored for excellence in teaching during the Association of Princeton Graduate Alumni's Tribute to Teaching Dinner May 30. Advanced degree candidates participated in the hooding ceremony at McCarter Theatre on June 2. 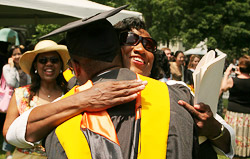 Alan Johnson, who was awarded a master of engineering degree in electrical engineering, was greeted by loved ones following the ceremony. (Photo: John Jameson)

Also on June 2, seniors were recognized at Class Day ceremonies, where the keynote speaker was Stephen Colbert, the host of Comedy Central's "The Colbert Report." He told the audience that he had come to Princeton to tell the class that, if they followed their dreams and applied what they had learned at the University, they had the power to change the world. But, in keeping with his character, Colbert implored, "Please don't do that."

In contrast, at the Baccalaureate service the day before, Paul Farmer, the medical anthropologist and physician who founded the international charity organization Partners in Health, asked the class of 2008 to do nothing less than change the world, urging them to ignite a broad social movement that would bring peace, health and justice to humanity. 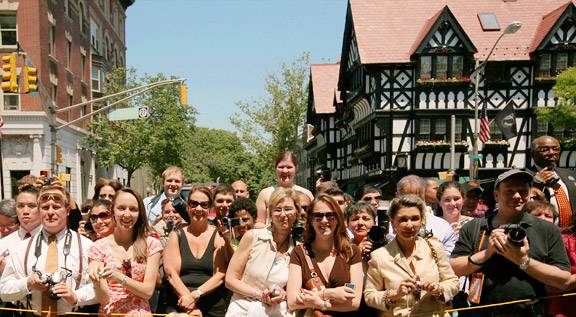 Family members waited to take photos of the graduates as they walked through FitzRandolph Gates for the first time as alumni. (Photo: John Jameson)