Hema Sundaresan, a member of the class of 2009, received a congratulatory embrace from her grandmother, Lalitha, on Cannon Green after the University's 262nd Commencement. Princeton awarded degrees to 1,128 undergraduates and 753 graduate students during ceremonies Tuesday, June 2, on the front lawn of Nassau Hall. (Photo: Denise Applewhite)

Play a video featuring words of wisdom from the four winners of this year's President's Awards for Distinguished Teaching as well as President Shirley M. Tilghman and the valedictorian.

President Shirley M. Tilghman implored the graduates to use their education to solve some of the world's most challenging problems. She also encouraged them to be seekers of purpose and meaning through engagement with the arts. (Photo: Denise Applewhite) 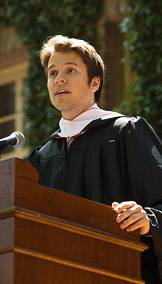 The valedictory oration was delivered by Holger Staude, an economics major from Frankfurt, Germany, who reminded his classmates to continue to ask questions. (Photo: Denise Applewhite)

Salutatorian Stephen Hammer, a classics major from Carrollton, Texas, delivered the salutatory address, which at Princeton is traditionally given in Latin and is the University's oldest student honor. (Photo: Denise Applewhite) 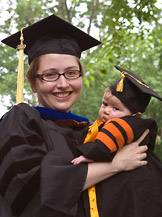 Lillian Pierce, who was Princeton's valedictorian in 2002, reached two milestones this year: defending her dissertation and giving birth to her daughter. Both dressed to receive the Ph.D. in mathematics. (Photo: Brian Wilson)

With today's Princeton graduates stepping out of FitzRandolph Gates and into the nation's economic downturn, President Shirley M. Tilghman implored them to use their education to solve some of the world's most challenging problems.

In her annual Commencement address June 2, she also encouraged them to be seekers of purpose and meaning through engagement with the arts.

"The education you have received at Princeton -- an education that we rightfully claim does not prepare you for one job but for many jobs -- puts you in remarkably good stead in an uncertain time," she said. "The skills and traits that we strived to instill in you -- critical thinking and writing, a finely tuned moral compass, a disciplined work ethic, a commitment to excellence in whatever you choose to do, compassion for those less privileged and a devotion to service -- will serve you well whatever comes next." 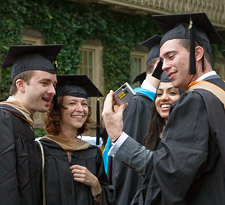 Students shot pictures of themselves as they waited for the procession to start. (Photo: Brian Wilson)

Speaking to the crowd assembled on the front lawn of Nassau Hall as skies cleared after a morning shower, she added, "Everywhere you look there are enormous problems -- many of them created by my generation, I will confess -- that will take the hard work and dedication of every one of you to fix."

In addition to the uncertain economic climate, she listed the effect of burning fossil fuels on the planet, religious and ethnic intolerance, the inequality of opportunity in the K-12 education system and the country's inefficient health care system.

"These problems are truly daunting, but individuals armed with a Princeton education have never been known to shy away from hard challenges," Tilghman said. "I have every confidence that you, like Judge Sonia Sotomayor of the class of 1976, the nominee to the U.S. Supreme Court and a trustee of this University, are ready to embrace this task today."

Tilghman noted that the University's purpose is to contribute to social change and economic progress not only through its graduates, but also through the research and scholarship its faculty and graduate students perform.

However, she reminded the audience that "as important as it is for the University to directly address the pressing issues of the day …, it is equally vital that we celebrate and vigorously defend the exploration of ideas for their own sake, without regard to immediate utility."

Tilghman specifically mentioned the importance of the creative and performing arts in "the curiosity-driven search for meaning that has been an integral part of the tradition of universities going back to the Middle Ages." 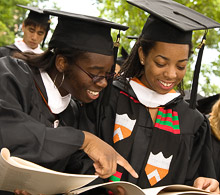 Tilghman, a world-renowned molecular biologist, launched a major initiative to enhance the role of the creative and performing arts in the life of the University and its community in 2006 with support from a significant gift by alumnus and trustee Peter B. Lewis.

"At Princeton we are committed to folding into a seamless continuum the making and the study of art," she said. "Both are deeply creative human endeavors; both are essential to the vibrant life of a great university, and when they happen in close proximity to one another, the sum is always greater than the parts.

"I come to this conclusion from the perspective of a scientist, having seen the tremendous synergy that can happen when an experimentalist and a theorist collaborate on a scientific problem," she continued. "The same, I believe, can happen when artists and critics occupy a common space, something that colleges and universities are uniquely positioned to provide."

Surveying the graduates, Tilghman said, "If we have succeeded, I am now looking at 1,881 future patrons of the arts, and we need every one of you."

She added, "In difficult times like these, we must be doubly protective of the arts, much as the Roosevelt administration sustained countless artists, musicians, actors and writers through the Works Progress Administration in the depths of the Great Depression. We must do so not simply for the sake of struggling artists, but for the sake of the future of our society."

In conclusion, Tilghman said, "As you walk, skip or run through the FitzRandolph Gates today, as educated citizens of this and many other nations, I hope you take from this place a sense of purpose that is drawn from an understanding of the major challenges of our day and a lifelong search for meaning through engagement with the arts. If you do, you will be carrying forward the spirit of Princeton and all that this place has aspired to teach you. And I expect you will continue to do as you have done at Princeton -- which is always to aim high and be bold."

Staude told his classmates that one of the most important skills they take with them as they leave Princeton is an ability and willingness to ask questions. "Being inquisitive and capable of positing the right questions will take us a long way," he said. "If nothing else, our four years at Princeton have given us the courage to approach the world as a big question -- not only in our professional roles … but also in our private lives, as thoughtful individuals and citizens."

Hammer delivered the salutatory address in Latin, a Princeton tradition dating to an era when the entire ceremony was conducted in Latin. The Latin Salutatory, Princeton's oldest student honor, began as a serious, formal address, but today it often contains humorous tributes, recollections and a farewell to Princeton campus life. 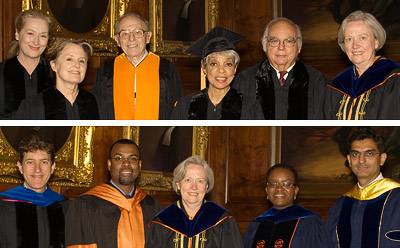 "With the journey having been begun, finish the race: love justice, shun vice, and exhibit integrity to the republic and compassion to all men," Hammer said. "To all those who helped us to come this far, of ages past and present, hail and farewell." 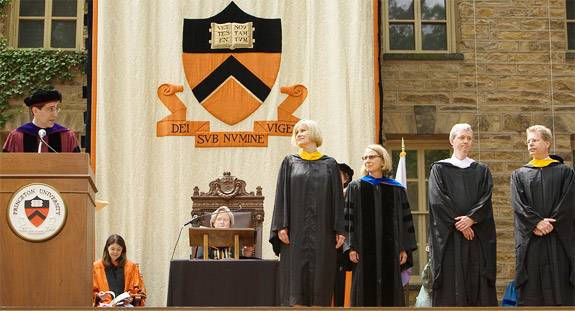 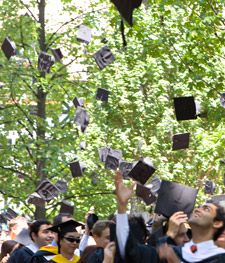 Students tossed their caps into the air after officially being designated as graduates at the ceremony. (Photo: Denise Applewhite)

Other honors for the new graduates were presented over the last few days of the academic year. Six graduate students were honored for excellence in teaching during the Association of Princeton Graduate Alumni's Tribute to Teaching Reception May 30. Advanced degree candidates participated in the hooding ceremony at McCarter Theatre on June 1. 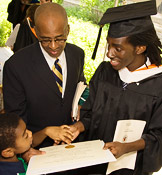 Also on June 1, seniors were recognized at Class Day ceremonies, where the keynote speaker was "CBS Evening News" anchor and managing editor Katie Couric. She told the students: "Take some chances. Get out of your comfort zone, even if that's extremely uncomfortable. Make some noise. Be a rabble-rouser."

At the Baccalaureate service the day before, U.S. Army Gen. David Petraeus, a Princeton graduate alumnus and commander of the U.S. Central Command, challenged graduating seniors to enter a life of public service: "Be bold and fearless in channeling your energy into the undaunted pursuit of worthwhile work."

Students celebrated as they walked through FitzRandolph Gates after the ceremony. (Photo: Brian Wilson)