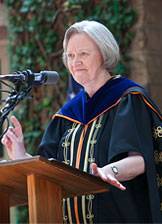 Lamenting "a K-12 education system that is leaving vast numbers of students behind," Princeton President Shirley M. Tilghman encouraged the 2,021 graduates to help close the educational achievement gap. Here she addresses the crowd of 7,500 guests assembled on the front lawn of Nassau Hall for the University's 264th Commencement.

Play a video highlighting insights from the class of 2011 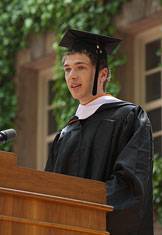 Princeton senior John Pardon delivers the valedictory address at the University's Commencement ceremony, telling his peers that the completion of their under-graduate studies should not mark the end of their quest for knowledge. 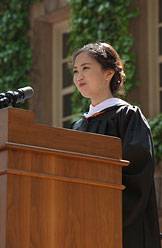 Irfan Kherani (middle) proudly displays his diploma after collecting it from the Wilson College residential college diploma distribution after Commencement. His father, Nizar Kherani, and mother, Nasim Kherani, came from Edmonton, Alberta, for the ceremony.

Calling education "our most powerful engine for social mobility," Princeton University President Shirley M. Tilghman implored this year's graduates to use their knowledge to improve the country's K-12 education system.

"Today you leave this privileged place as the beneficiaries of a world-class education -- one that I hope has prepared you well for whatever comes next, including the unexpected," she said May 31 in her annual Commencement address. "Without in any way diminishing the importance of your own hard work, you are among the lucky ones."

Speaking to the crowd of 7,500 guests assembled on the front lawn of Nassau Hall, she added, "I find it deeply paradoxical that the United States has without question the finest colleges and universities in the world, but a K-12 education system that is leaving vast numbers of students behind." 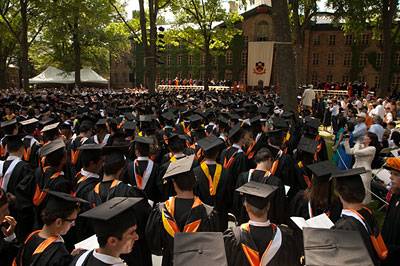 Princeton's front campus is a sea of mortarboards and gowns during the University's 264th Commencement ceremony, at which 2,021 undergraduate and graduate students were awarded degrees. (Photo by John Jameson)

Drawing upon personal experiences, data and examples set by Princeton alumni, she outlined the problem and encouraged the 2,021 graduates to help close the educational achievement gap. "Almost certainly each of you encountered along the way one or more teachers who encouraged you to excel, or raised your sights, or inspired in you a passion for learning," Tilghman said. "I am here today because Lionel Orlikow, my history teacher at Kelvin High School in Winnipeg, Manitoba, sent a lightning bolt through my mind and opened my eyes to the world beyond my middle-class neighborhood. … He inspired me to aim high and be bold."

Getting into the spirit of Princeton's school colors, Daisy Pfander (from left) gave her son, Travis Pfander, orange flowers for graduation. Catie Bartlett of the class of 2012 joined the celebration. (Photo by Denise Applewhite)

But, she said, there are too many students today who will never encounter their own "Mr. Orlikow." She noted that 25 percent of students in this country drop out or fail to complete high school on time -- resulting in a graduation rate that places the United States 20th among the 34 members of the Organization for Economic Co-operation and Development (OECD). In addition, American students perform at or below average among OECD countries in reading, mathematics and science.

"What is downright distressing is the fact that a student's chances of being in the bottom quartile and never finishing high school are almost entirely determined by his or her family circumstances," Tilghman said. "Just consider the fact that the best predictor of SAT score is family income."

Tilghman referenced a recent op-ed in The Daily Princetonian student newspaper by U.S. Secretary of Education Arne Duncan, who spoke on campus this spring. "[He] calls unequal access of students to an excellent education the civil rights issue of our time, and he is right," she said.

Beyond helping to achieve social justice, providing a quality education also could aid in lifting the U.S. economy, she said, increasing both upward mobility for individuals and global competitiveness for the country. "The advent of the knowledge economy has inextricably linked America's future economic competitiveness in the world to the creativity and nimbleness of its workforce," Tilghman said. 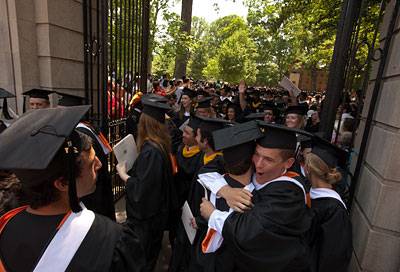 In appealing to the graduates, Tilghman offered up several Princetonians as leaders in the "education revolution" that is gaining momentum across America. In fact, she credited that term to Wendy Kopp, a 1989 Princeton alumna who founded Teach for America, the national corps of recent college graduates who commit two years to teach in the country's poorest-performing schools.

Tilghman also cited: Michelle Shearer '95, this year's National Teacher of the Year, who discovered her interest in teaching at Princeton while volunteering at the Marie Katzenbach School for the Deaf in Trenton, N.J.; former University trustee Raj Vinnakota '93, who founded the SEED School, the nation's first charter boarding school, in Washington, D.C., and a second in Baltimore that cater to the poorest and most disadvantaged students; former trustee John Scully '66, who began directing his philanthropy 20 years ago to an after-school tutoring and mentoring program for disadvantaged youth in Richmond, Calif., called Making Waves, which has grown to include a charter middle school and a new high school; and Jared Polis '96, who served on the Colorado State Board of Education, created a foundation, and established two innovative charter schools for low-income students and now is a champion for public education as a congressman from Colorado. 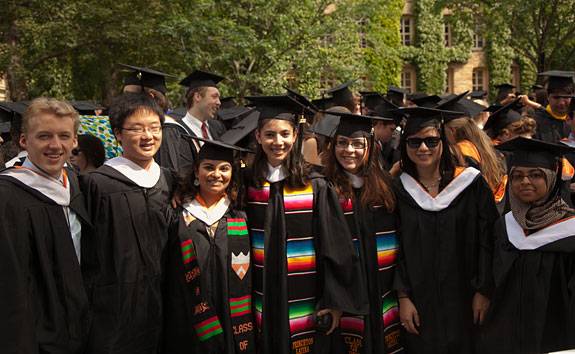 A group of classmates shares a moment of togetherness before the Commencement procession begins. (Photo by John Jameson)

While not all graduates may accomplish these successes, most will be citizens of places "that will depend on their public schools for their future prosperity, and all of you will be able to find ways to devote some of your time and talents to raising both their sights and their levels of achievement," Tilghman said. "Your pledge today to demand that those schools serve their students well, not just the lucky ones like you, could make all the difference in the world. The stakes have never been higher, nor the moment more urgent, for millions of young Americans and the nation as a whole." 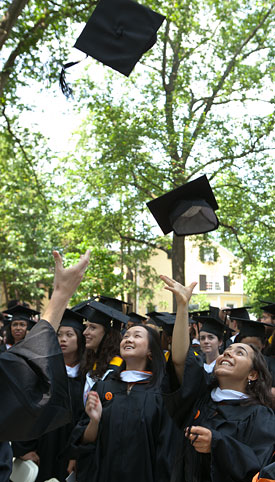 Princeton students celebrate after officially being designated as graduates by tossing their mortarboards into the air. (Photo by Denise Applewhite)

She concluded the address with her traditional send-off -- this time including a tribute to her former teacher.

"So as you walk, skip or run through the FitzRandolph Gates today, as educated citizens of this and many other nations, I hope you will carry forward the spirit of Princeton and all that it has sought to teach you," Tilghman said. "And I expect you to do as Mr. Orlikow directed me to do when I graduated from high school -- to aim high and be bold!"

Pardon said that while the graduation ceremony marked the conclusion of formal education for many of the students, it did not necessarily mean the end of a quest for knowledge.

"I sincerely hope that all of us will be able to excite our intellectual curiosity in our future work, because it is curiosity that makes us seek out those challenges that have the potential to turn into life-changing new experiences," he said. "… at Princeton, we have learned how to approach new material with energy and enthusiasm. We have learned to look for the challenge rather than for the comfortable. This is certainly what makes for top-quality work in any field."

Heerang Kang gets help adjusting his robe from Amber Oliva before they begin the procession for Commencement. (Photo by John Jameson)

Shi delivered a salutatory poem in Latin, one of her key areas of study. The Princeton tradition dates to an era when the entire ceremony was conducted in Latin. The Latin Salutatory, Princeton's oldest student honor, began as a serious, formal address, but today it often contains humorous tributes, recollections and a farewell to Princeton campus life.

"So the generations advance onward, " Shi said. "Marching once and only once, then, friends, and all together, we sing, 'Hurrah, Victory!' exulting, and twice again say, 'Hurrah, Victory!' and will lift to heaven's lofty arch the noble name of Princeton, keeping each other close to our hearts, ever forthright. Blessed friends, I shall say 'Hail,' not 'Farewell,' and this too: 'With undying loyalty, love each other always.'"

The University awarded degrees to 1,202 undergraduates in the class of 2011, four from other classes and 815 graduate students at its 264th Commencement. It also conferred honorary doctoral degrees upon six individuals for their contributions to sports, education and the arts: Henry "Hank" Aaron, baseball Hall-of-Famer; Geoffrey Canada, champion for children in Harlem; Susan Desmond-Hellmann, clinical researcher and chancellor of the University of California-San Francisco; Charles Gillispie, Princeton's Dayton Stockton Professor of History Emeritus; Judith Jamison, dancer and choreographer and artistic director of the Alvin Ailey American Dance Theater; and 1966 Princeton alumnus Robert Rawson Jr., legal expert and long-serving member of the University's Board of Trustees. 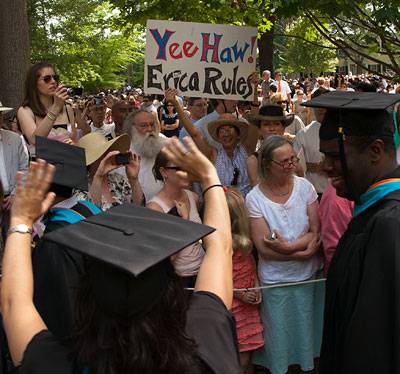 Parents and families are jubilant while holding signs and cheering for their graduates as the students pass by during the procession on the way to the Commencement ceremony. (Photo by John Jameson)

Tilghman also recognized Nancy Weiss Malkiel at her last Commencement as dean of the college, a position she has held for 24 years. "During her deanship, she has presented nearly 27,000 candidates for undergraduate degrees," Tilghman said. A member of the history faculty since 1969, Malkiel plans to take a year's leave and then return to teaching and scholarship.

As it does each year, Princeton honored excellence in teaching at the Commencement ceremony. Four Princeton faculty members received President's Awards for Distinguished Teaching, and four outstanding secondary school teachers from across New Jersey also were recognized for their work.

Other honors for students were presented over the last few days of the academic year. Six graduate students were honored for excellence in teaching during the Association of Princeton Graduate Alumni's Tribute to Teaching Reception May 28. Advanced degree candidates participated in the hooding ceremony at Princeton Stadium on May 30. 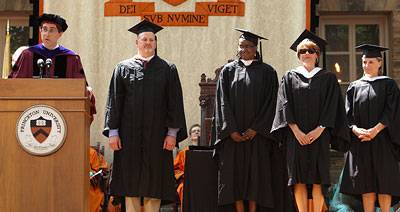 Also on May 30, seniors were recognized at Class Day ceremonies, where the keynote speaker was actress Brooke Shields, a 1987 Princeton alumna. In her address, she combined memories from her four years on campus with advice about how the class of 2011 might put their Princeton experience to use in their professional and personal lives. "This university does not just teach you about subjects, it teaches you how to have independent thought, it teaches you how to take direction and give it, how to engage in heated debate," she said. "Without the four years of learning and growth that culminated in my degree, I would have never survived my industry. … I would never have been able to adapt or reinvent: from movies, to television, to stage, to author, to mom. I've been lucky, but only because I worked hard and I had the same strong foundation that each of you carries today."

At the Baccalaureate service the day before, New York City Mayor Michael Bloomberg, a renowned businessman and philanthropist, whose daughter Emma is a 2001 Princeton graduate, spoke. He urged the graduates to find time to give back to others: "It is the glue that binds us together as Americans -- and the fact that your generation is more active in service than any before it is an incredibly hopeful and encouraging sign for the future." 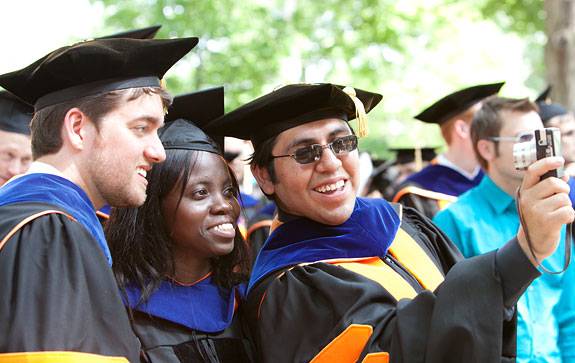 Degree candidates from Princeton University's Graduate School pause to memorialize the moment during the Commencement ceremony. (Photo by Denise Applewhite)