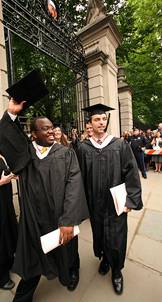 Above left: Bachelor's degree recipient Ruth Hunt and her family check out the newly minted diploma. 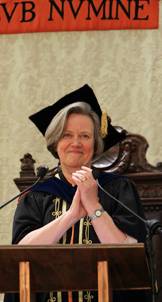 President Shirley M. Tilghman presided over the Commencement ceremony. Her remarks focused on the legacy of Woodrow Wilson. 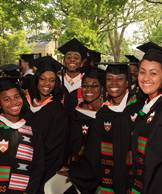 A number of students wore stoles they received at the University's first Pan-African Graduation Ceremony held on June 4.

At left: The new graduates celebrated after walking through FitzRandolph Gates. 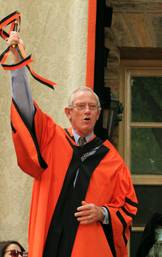 Professor John Fleming, the chief marshal for University convocations, acknowledged applause after President Shirley M. Tilghman recognized him on the occasion of his retirement from the faculty this year. He has led the academic procession at 17 Commencements.

Below left: Students enjoyed the salutatory address, which is traditionally given in Latin. Students were provided with translated copies of the remarks, complete with footnotes telling them when to applaud (applaudite), laugh (ridete) and shout loudly (acclamate magna voce). 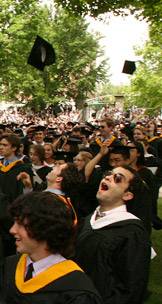 Students tossed their caps into the air after officially being designated as graduates. 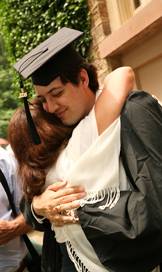 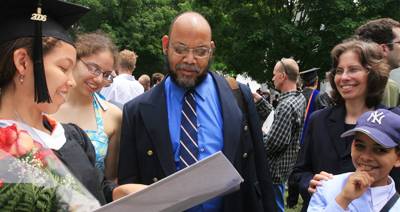 Princeton University President Shirley M. Tilghman drew upon the wisdom of one of her predecessors for advice for today's graduates.

Referring to the legacy of Princeton's 13th president, Woodrow Wilson, she exhorted students during her June 6 Commencement address  to listen to one another "with open minds and mutual respect" as well as to define their lives "in terms of service to causes that are larger than ourselves."

Tilghman reminded the crowd assembled on the front lawn of Nassau Hall that this year marks the 150th anniversary of Wilson's birth and the 75th anniversary of the founding of the University's Woodrow Wilson School of Public and International Affairs. "As a consequence," she said. "I have been reading a great deal about Wilson and thinking about the mark he left on Princeton."

His "insistence that universities foster lively and unfettered dialogue between students and faculty" seems especially important in a world "in which the nature and quality of public discourse has been impoverished," she said.

"It used to be possible to describe the range of public opinion as a bell curve, with the majority finding common purpose in the middle ground, but increasingly our nation's voices are more accurately portrayed as two bell curves, separated by a deep and bitter divide," Tilghman said. "Never has the world seemed so adamantly polarized to me, and I fear we are at risk of losing an essential ingredient of a vital democracy and a humane worldwide community -- listening to one another with open minds and mutual respect."

She encouraged the graduates to continue to pursue ideas with the spirit of inquiry they have found at Princeton. "I hope that this inclination to doubt, to expand, to enhance, to review, to interrogate has become part of your lives, and that you relish every opportunity to exercise these qualities," she said, urging the students to take stands on issues and add to the public discourse.

At the same time, she implored them to be mindful of other opinions. "We also hope that you have developed the capacity to imagine, even if for only a moment, what must be in the mind of a person with whom you profoundly disagree," she said. "If you have learned to do this, you will never be able to hate or defame that person, for you will have looked into, and seen first-hand, the humanity in the other that unites us all."

Another part of Wilson's legacy -- his call to service to the nation -- embraces a broader definition of engagement in public life, Tilghman said. "The modern cacophony of voices shouting past one another is so troubling and dangerous precisely because the world is in dire need of well-educated men and women who are willing to join together to undo the deeds that should not have been done and to accomplish those that were left undone -- not only by earlier generations, but by my own," she added.

The challenges facing the next generation are "truly daunting," she said, citing environmental, health, scientific and social concerns ranging from global warming to the erosion of public education.

"Despite these monumental challenges, I remain an optimist," she said. "I am optimistic because sitting before me on this magnificent historic lawn are men and women who have the intelligence, the will and the education to confront and solve the problems my generation has handed you."

In conclusion, Tilghman said, "... as you walk or skip or run through the FitzRandolph Gates today, I hope you will carry with you the spirit of Princeton and all that this place has aspired to teach you -- a determination to follow your passions in service to the common good, an openness to new ideas, and a willingness to engage in civil discourse with integrity and mutual respect. I also expect you will continue to do what you have done so well at Princeton -- to aim high and be bold." 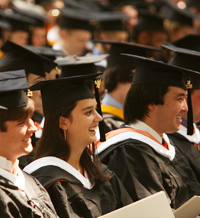 Looking back on his time at the University, Douthitt said, "Princeton has been an incredible incubator: It has indulged our minds, and our minds have grown. Perhaps more importantly, it has kept us nestled away from the intellectually toxic culture of our time. This culture respects power more than ability, it respects answers more than inquiry and it respects naked opinion more than nuance. We should be grateful that Princeton has given us the safety to immerse ourselves in a rich suspension of people and ideas so that we could develop our intellect and our character uninterrupted."

Padilla delivered the salutatory address in Latin, a Princeton tradition dating to an era when the entire ceremony was conducted in Latin. The Latin Salutatory, Princeton's oldest student honor, began as a serious, formal address, but today it often contains humorous tributes, recollections and a farewell to Princeton campus life.

"Our fame will be bounded by the stars, and our names will be imperishable," Padilla told his classmates. "I thank you for your friendship and support. I do not doubt that in the future we will all flourish in the diverse walks of life." 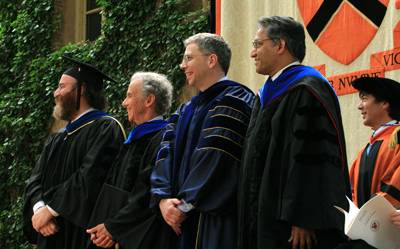 Other honors for the new graduates were presented over the last few days of the academic year. Five graduate students were honored for excellence in teaching during the Association of Princeton Graduate Alumni's Tribute to Teaching Dinner June 2. Seniors were recognized at Class Day ceremonies June 5, where the keynote speaker was former U.S. President Bill Clinton. He challenged the students to apply the "unprecedented personal power" they have gained through education to serve an increasingly interdependent world.

At the Baccalaureate service on June 4, humorist and best-selling author David Sedaris entertained the students with a fanciful tale describing his fictional years as a Princeton student. He concluded his story by reminding the students that the future is unpredictable. "Stuff comes up, weird doors open, people fall into things," he said.