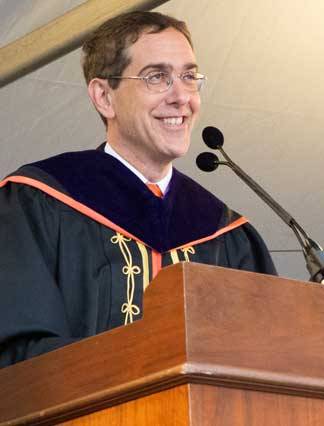 Princeton President Christopher L. Eisgruber addresses the Class of 2015 and their guests at the University's Commencement on Tuesday, June 2. A rainy morning did not dampen spirits as Eisgruber encouraged graduates to "pursue ideals that are beautiful and profound." The University awarded degrees to 1,271 undergraduates and 885 graduate students.

Princeton President Christopher L. Eisgruber addresses the Class of 2015 and their guests at the University's Commencement on Tuesday, June 2. A rainy morning did not dampen spirits as Eisgruber encouraged graduates to "pursue ideals that are beautiful and profound." The University awarded degrees to 1,271 undergraduates and 885 graduate students. 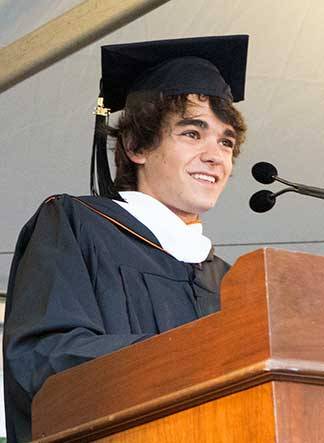 Misha Semenov, an architecture major from San Francisco, gives the valedictory oration, urging fellow graduates to hold on to a sense of wonder and "never, ever grow up."

Misha Semenov, an architecture major from San Francisco, gives the valedictory oration, urging fellow graduates to hold on to a sense of wonder and "never, ever grow up." 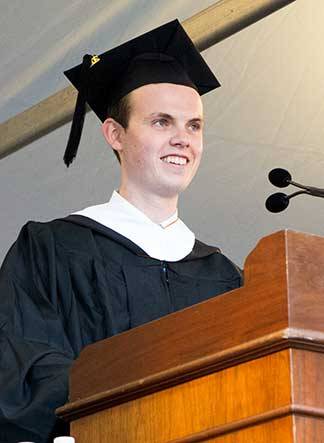 Umbrellas, ponchos — and smiles — were in abundance as Princeton University celebrated its 268th Commencement on a rainy Tuesday morning, June 2.

Welcoming some 10,000 students and guests to the "wet and slightly soggy" front lawn of Nassau Hall, Princeton President Christopher L. Eisgruber announced that due to the ongoing rain, the order of the program would change.

After a round of thanks to families and friends and to all who had contributed to the success of the many year-end celebrations, Eisgruber conferred bachelor's and advanced degrees on the graduating students. 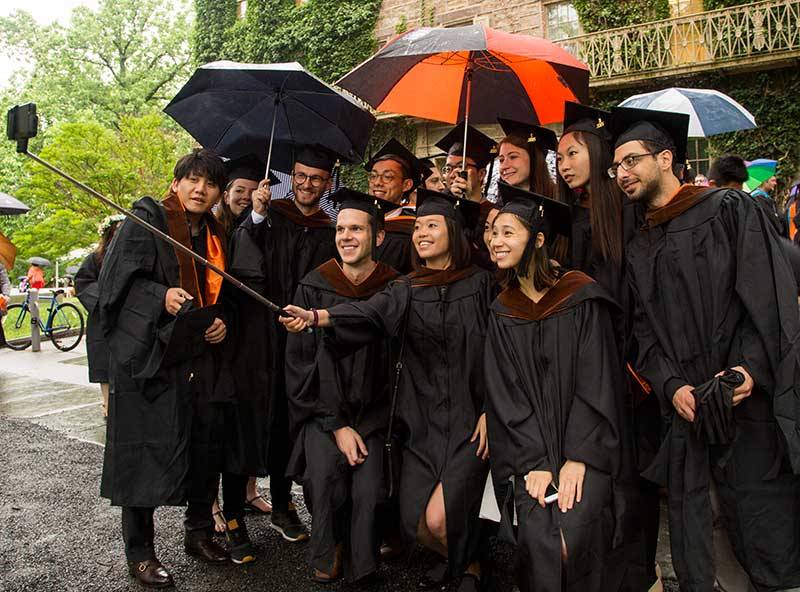 Capturing the moment, friends gather for a "selfie" in front of West College. (Photo by John Jameson, Office of Communications)

In his Commencement address, which Eisgruber abridged and planned to distribute in its entirety to all the graduates after the ceremony and which is available online, he urged the newly minted graduates to engage with a world that "requires your commitment to dream audaciously."

"America has since its birth been a land of diversity and a land of audacious dreamers," said Eisgruber. "It has benefited again and again from men and women who shared, against all odds, the dream that we might transcend our differences and yet be one people. It has benefited, too, from individuals who dared to believe that scholarship and education could generate the progress, the discoveries and the leaders who will help to solve our most difficult problems in our darkest hours."

As the graduates prepared to leave campus through FitzRandolph Gate as Princeton alumni, Eisgruber urged them to "pursue ideals that are beautiful and profound."

Recognizing that the graduates would need to take care of practical matters such as finding apartments and paying rent, he pointed to the examples of Alan Turing and Frederick Douglass. They "remind us that the beautiful and profound are sometimes more powerful and more beneficial than all the things that the conventional world praises in the name of pragmatic utility."

In closing, Eisgruber said: "And so it is with an eye toward the beautiful and the profound that we gather here today, bursting with joy amidst the turmoil of the outside world and the cold rain, to congratulate you on your achievements and wish you well as you begin your journeys beyond this campus.

"We feel great confidence in your ability to meet the challenges that lie ahead, for on this special and auspicious day, you — our graduate students and our undergraduate seniors — are now, and shall be forever into the future, Princeton University's Great Class of 2015.

In May and June, Princeton celebrated Reunions and a number of graduation events, concluding with the University's 268th Commencement ceremony. (Video by Danielle Alio, Office of Communications) 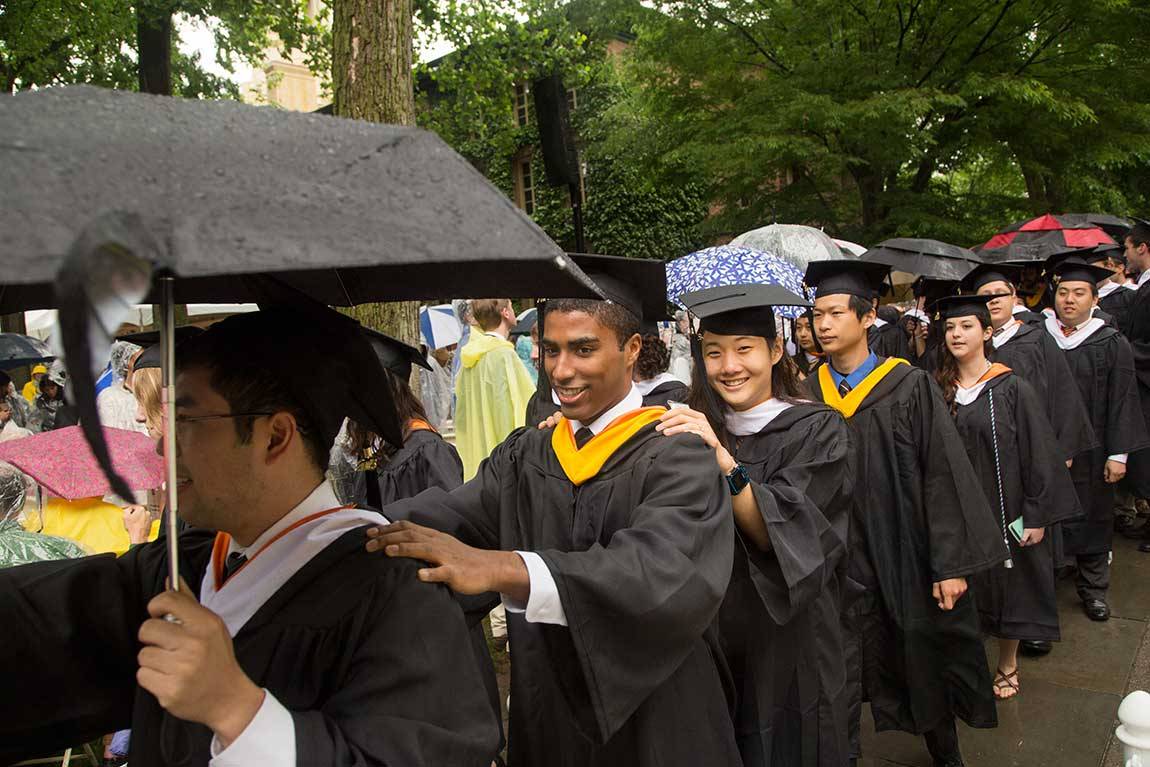 The procession at Commencement is the milestone step as Princeton students take the path from student to graduate. (Photo by John Jameson, Office of Communications)

The ceremony's two other speakers were valedictorian Misha Semenov, an architecture major from San Francisco, and salutatorian Neil Hannan, a classics major from Manhasset, New York.

Semenov implored the Class of 2015 to "never, ever grow up" and to hold on to a sense of wonder.

"In whatever field each of us has pursued, Princeton has layered onto our childhood perceptiveness the ability to appreciate and love the unseen, whether it's a cure for a rare disease in the elegant structure of a protein or the deep beauty and significance of a complex theme in a musical composition," he said.

Semenov asked graduates to embrace "candid openness, and the vulnerability that goes with it," explaining "that if we desire to give and get the most we can in every interaction, to heal others, to heal this broken world, we need to be our full, vulnerable, open selves, the children within." He added, "Rather than hide from our pent-up fears, our insecurities, our idiosyncrasies, we must express and accept them, not as imperfections but as part of the unique story we share every time we touch someone or something with our power of sensitivity." 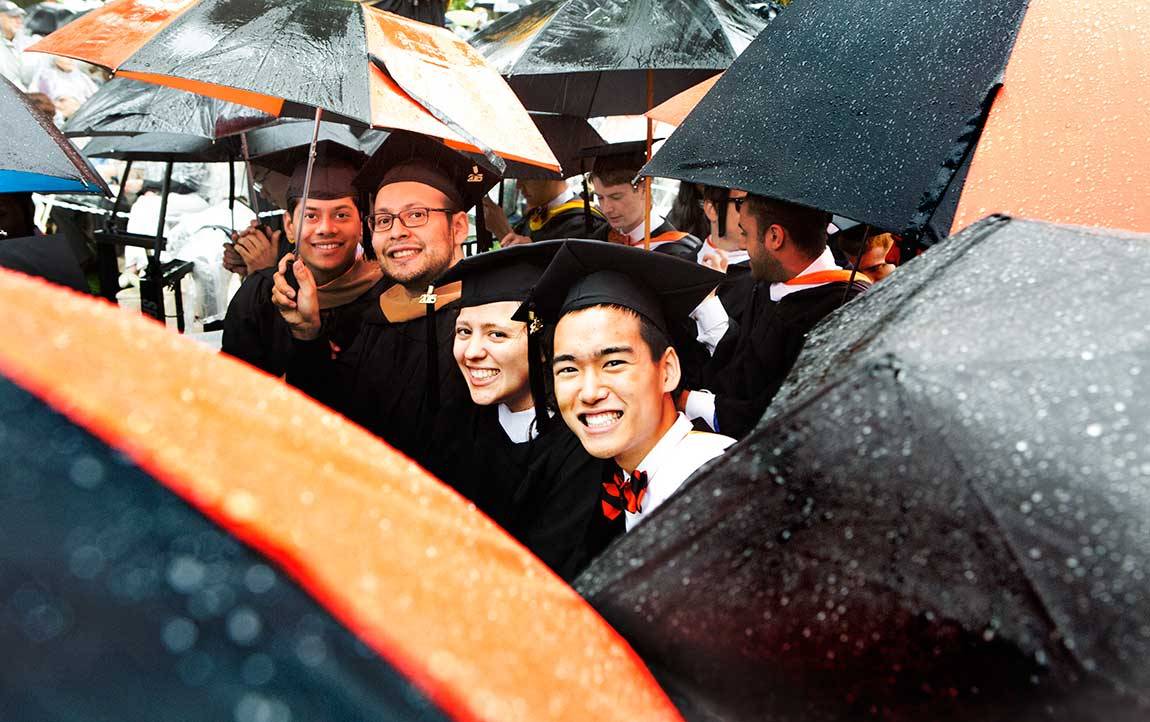 The morning of Commencement brought a second consecutive day of rain to year-end festivities — and ongoing high spirits. (Photo by Denise Applewhite, Office of Communications)

Hannan delivered the salutatory address in Latin. This Princeton tradition dates to the first Commencement in 1748, when the entire ceremony was conducted in Latin. The Latin Salutatory, Princeton's oldest student honor, began as a formal address but today often contains humorous tributes and a fond farewell to Princeton campus life.

In his address, which was written in verse, Hannan closed with warm wishes to his fellow students:

"And now we exchange this place for further ones,

And begin our departure,

May you always be well." 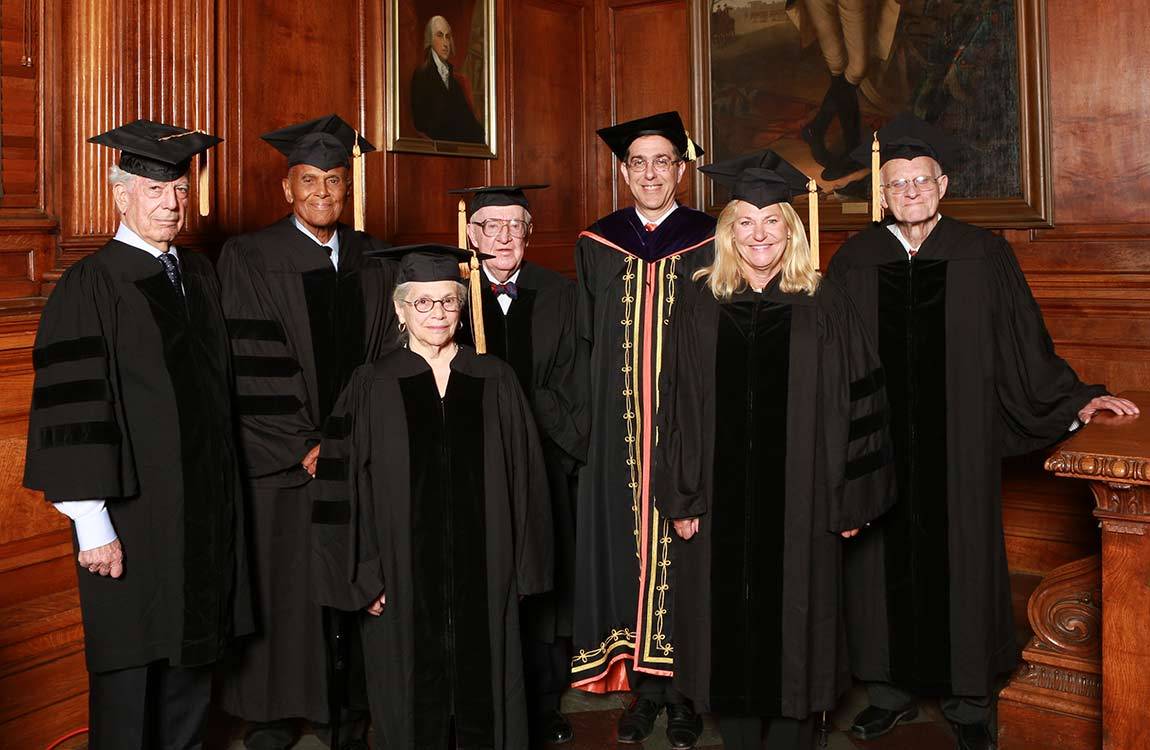 The University awarded degrees to 1,268 undergraduates in the Class of 2015, three from other classes and 885 graduate students. It also conferred honorary doctoral degrees upon six people for their contributions to civil rights, engineering, the law, literature and service to the nation: Harry Belafonte, social activist and artist; David Billington, the Gordon Y.S. Wu Professor of Engineering, Emeritus, at Princeton; Ann Dunwoody, retired four-star general of the U.S. Army; Deborah Poritz, lawyer and former chief justice of the Supreme Court of New Jersey; John Paul Stevens, retired associate justice of the Supreme Court; and Mario Vargas Llosa, Peruvian novelist and Nobel laureate in literature.

Students received other honors over the last few days of the academic year. 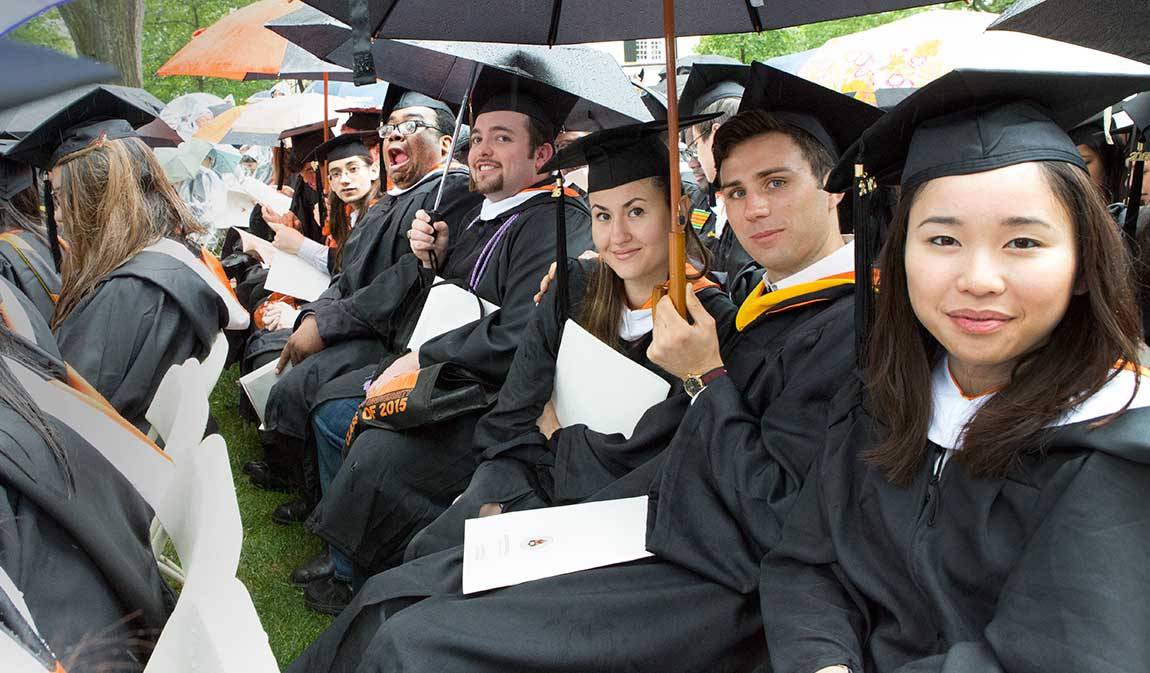 Students gather on the front lawn of Nassau Hall for the conferral of their degrees. (Photo by Denise Applewhite, Office of Communications)

On June 1, seniors were recognized at Class Day ceremonies held in the University Chapel instead of on Cannon Green due to rain, where the keynote speaker was film director Christopher Nolan. He said he was going to break with the tradition of asking graduating students to "chase your dreams."

Later that day, with rain still a factor, advanced degree recipients participated in the Hooding Ceremony in Richardson Auditorium in Alexander Hall, where Eisgruber and Dean of the Graduate School Sanjeev Kulkarni gave addresses. This was the first year that degree recipients could choose to be hooded by their adviser, and more than 100 students elected to do so.

"Their presence and participation reminds us that the complex journey to an advanced degree is made possible only with the continued encouragement, guidance and support of dedicated faculty," said Kulkarni of the 85 faculty members who candidates chose to have hood them.

Princeton graduate alumna and trustee Lisa P. Jackson, vice president of environmental initiatives at Apple Inc., and former administrator of the U.S. Environmental Protection Agency, spoke at the interfaith Baccalaureate service May 31 in the chapel. Her remarks focused on how students have been shaped by their time at the University and how they, in turn, will have a role in shaping Princeton's future.

"I think it can take a while to truly appreciate your Princeton experience — to appreciate what Princeton not only gives us but expects of each one of us," Jackson said.

Webcasts of Princeton graduation events will be available on the University's Media Central website. 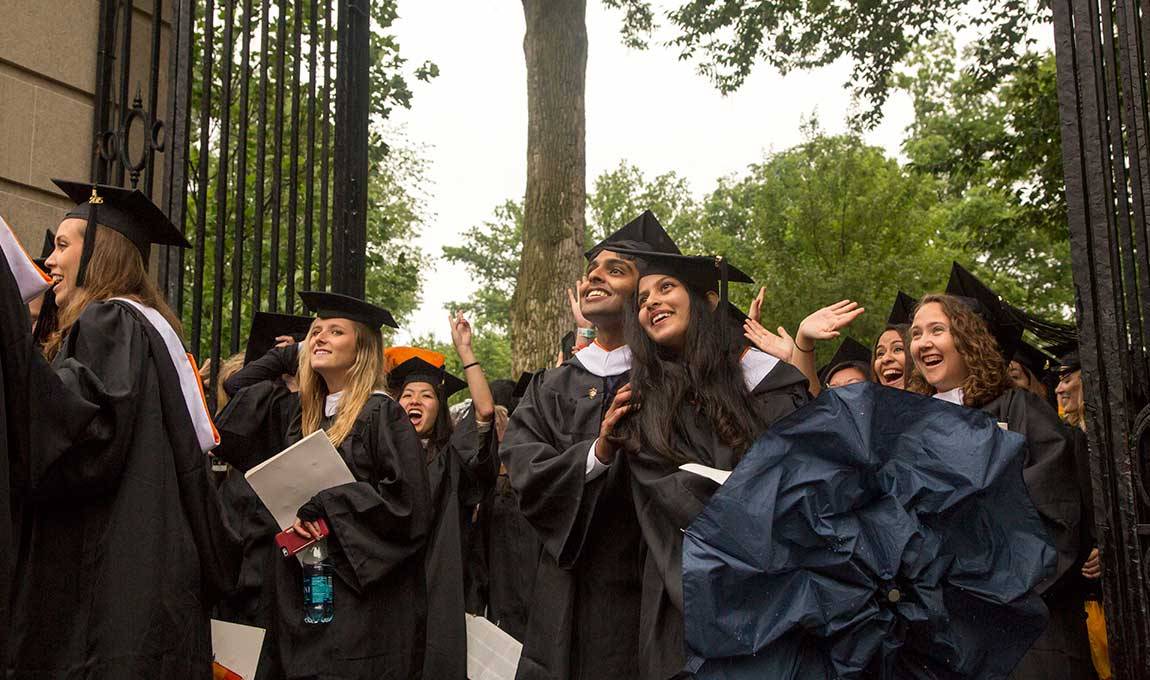 Graduates pass through FitzRandolph Gate after the ceremony — Princeton alumni heading out to futures across the globe. (Photo by John Jameson, Office of Communications) 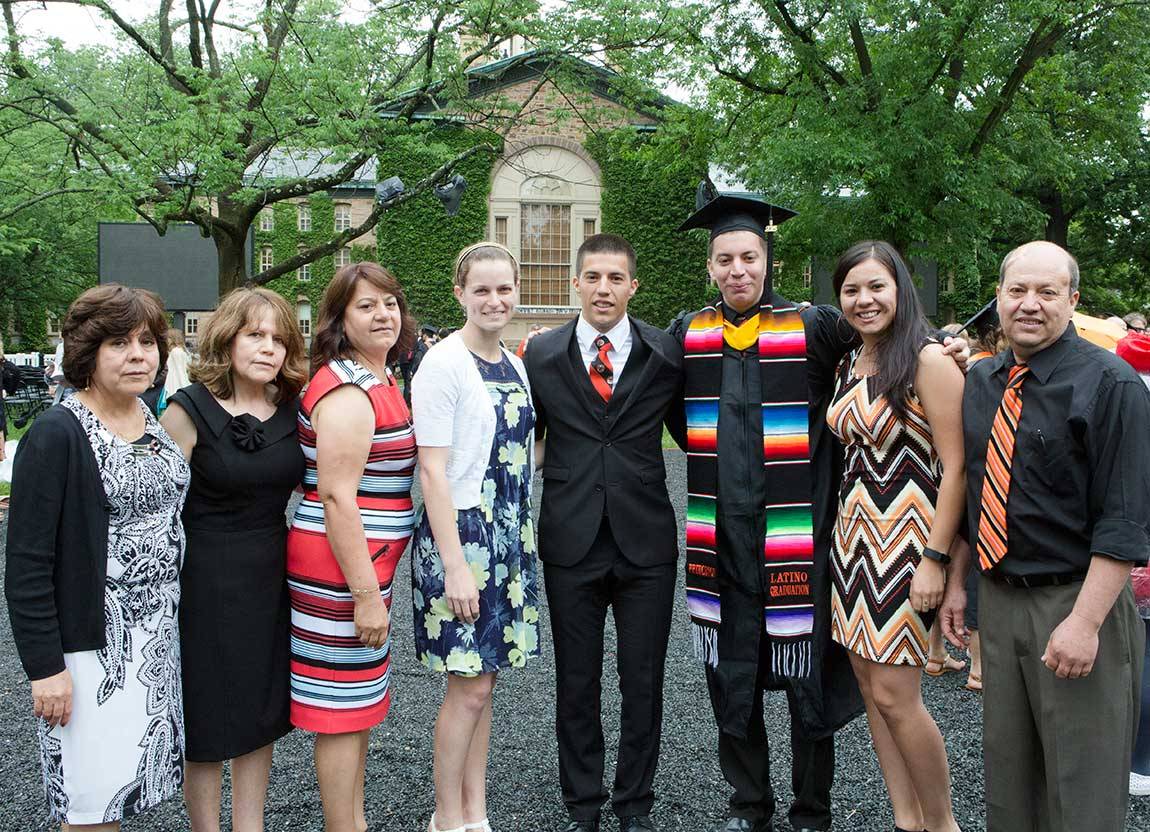 Three siblings, the first in their family to attend college: The Alvarez family celebrates the graduation of José, Class of 2015 (third from right). Also pictured: their mother Herminia (third from left) and two aunts; Cesar, Class of 2013 (center) and his fiancée, Colleen Knight, Class of 2014; Ana, Class of 2012 (second from right); and their father Juan (far right). The siblings are aspiring engineers. Watch a video feature about their college journey. (Photo by Denise Applewhite, Office of Communications) 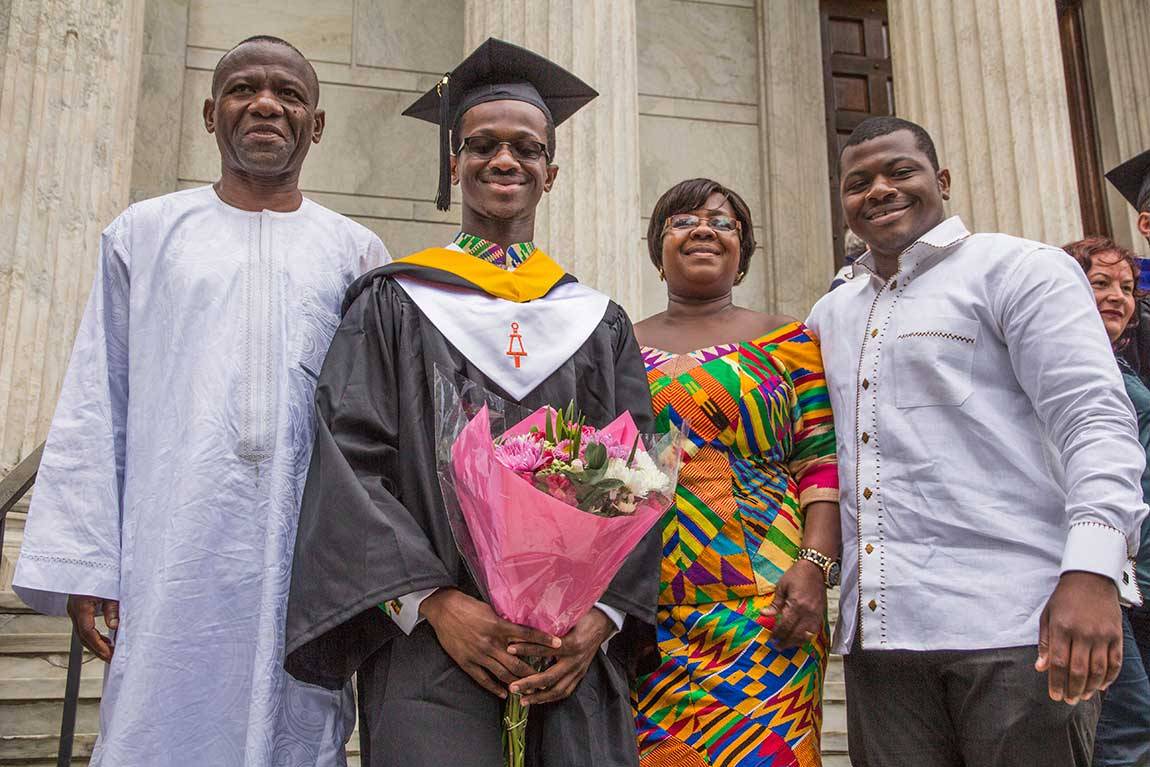 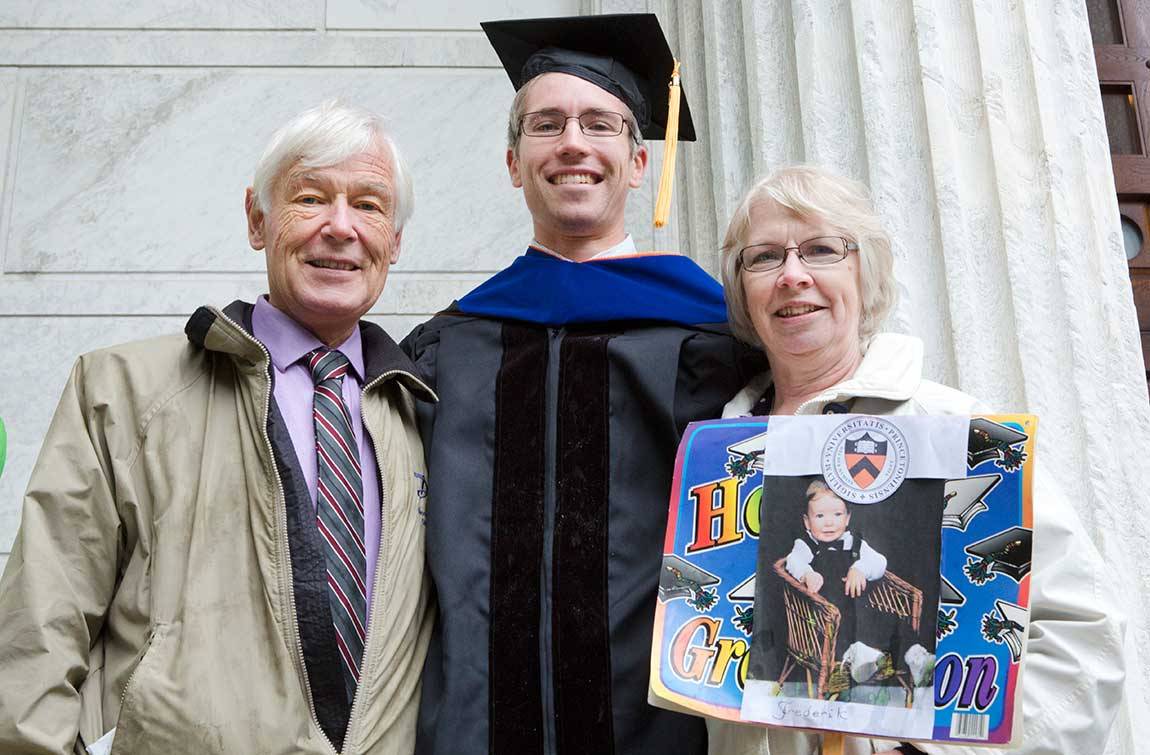 Frederik Brasz (center), who received a Ph.D. in mechanical and aerospace engineering, is greeted after the ceremony by his parents, Joost (left) and Ulla (right) Brasz, who brought along a congratulatory sign featuring a photo of Frederik at age 1. (Photo by Denise Applewhite, Office of Communications)