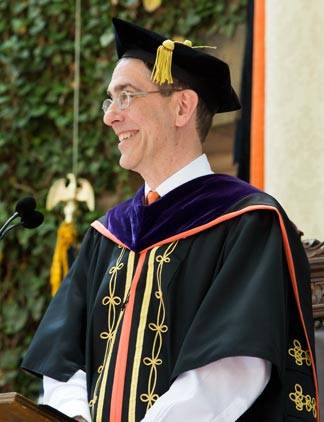 President Christopher L. Eisgruber smiles broadly from the stage in front of Nassau Hall at Princeton University's 269th Commencement on Tuesday, May 31. The warm and sunny weather was ideal for Commencement, when the University awarded degrees to 1,291 members of the undergraduate Class of 2016 and 906 graduate students.

President Christopher L. Eisgruber smiles broadly from the stage in front of Nassau Hall at Princeton University's 269th Commencement on Tuesday, May 31. The warm and sunny weather was ideal for Commencement, when the University awarded degrees to 1,291 members of the undergraduate Class of 2016 and 906 graduate students. 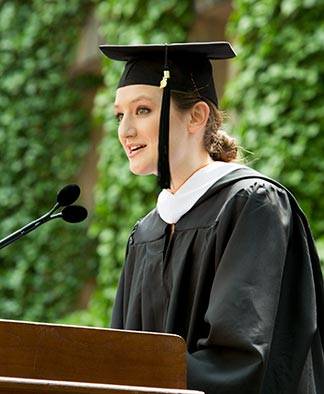 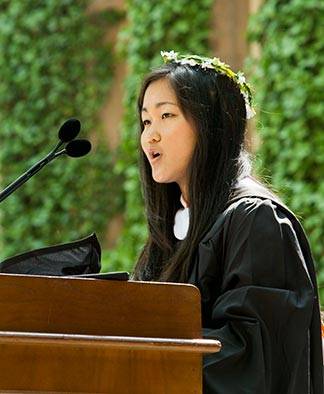 Esther Kim delivers the salutatory address. She replaced her mortar board with a garland as she spoke in Latin.

Esther Kim delivers the salutatory address. She replaced her mortar board with a garland as she spoke in Latin. 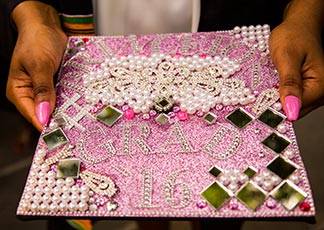 Dashaya Foreman shows off the bejeweled cap that her mom decorated for Foreman to wear during Commencement.

Dashaya Foreman shows off the bejeweled cap that her mom decorated for Foreman to wear during Commencement.

Speaking to graduates at Princeton University's 269th Commencement on Tuesday, May 31, President Christopher L. Eisgruber called for a commitment to engaged discourse and a renewal of civic culture.

In his address to some 10,000 students and guests seated across the sun-dappled front lawn of Nassau Hall, Eisgruber said that while he was tempted to send off the graduates with "a wish that such high spirits will mark all of your future endeavors," he would not want to "ignore the challenges that are evident all around us."

"The world you enter is, in too many places, troubled and turbulent, fraught with disturbing amounts of anger, resentment and violence," he said. "The world that awaits you will sometimes be frustrating and difficult, but it is a world that needs your talents, your citizenship and your engagement."

He spoke of the "shockingly coarse presidential election campaign" in the United States "occurring at a time when politics has become strikingly polarized."

Such divisions around "ideological silos" might pull people apart, but Eisgruber emphasized the deep experiences Princeton students have had in common.

"You have shared friendships, rivalries, highs and lows, cooperation, competition, and conflict, and these experiences have formed your identities not only as individuals but also as Princetonians," he said. 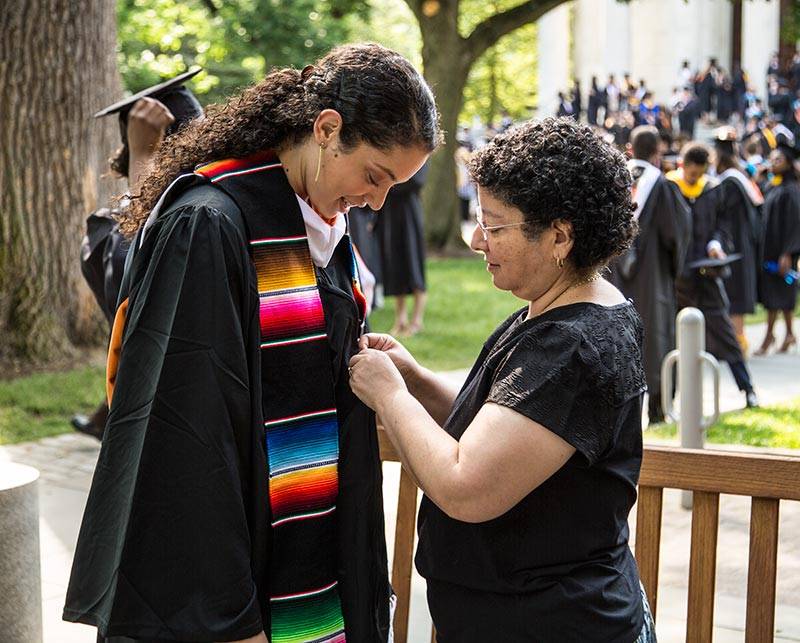 Linda Falter (right) helps her daughter, Melody Falter, put on her robe before the Commencement ceremony. (Photo by Nick Barberio, Office of Communications)

The "intellectual resources" that allow today's Princeton graduates to "connect with one another" will be important in helping to "resist or reverse the partisanship that so threatens America and the world today," Eisgruber said.

"We need people who commit themselves to forging a public culture that enables a shared, respectful and engaged discourse through which we can negotiate differences and address the urgent issues confronting us," he said. "Taking up that project will call upon all the resources that your liberal arts education has provided you."

Eisgruber added, "Renewing our civic culture requires many things, not least among them a certain humanistic imagination." 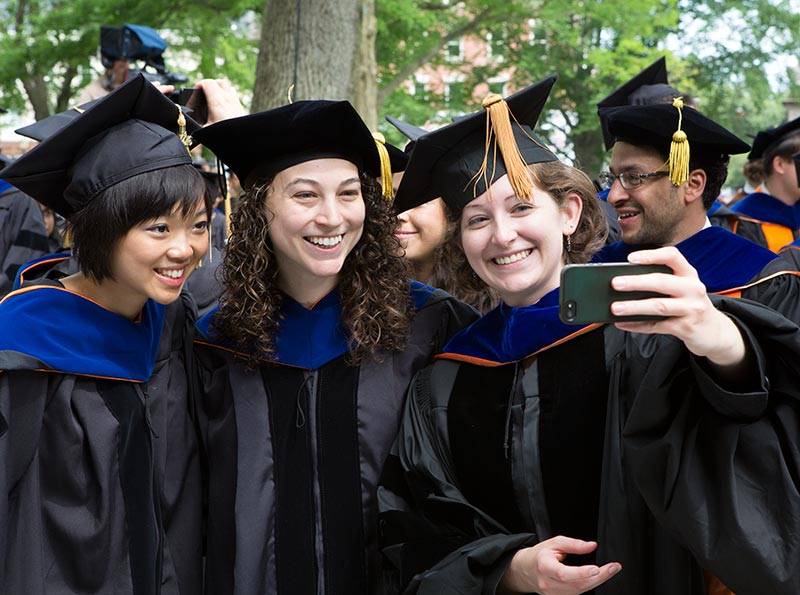 While waiting for Commencement to begin, graduate students pose for a "selfie" photograph on the lawn in front of Nassau Hall. (Photo by Denise Applewhite, Office of Communications)

Eisgruber spoke of his friend Mickey Edwards, the former Republican congressman from Oklahoma, who previously taught at the Woodrow Wilson School of Public and International Affairs at Princeton.

"He had a reputation as an independent thinker and a maverick," said Eisgruber. He described how Edwards decided to confront the polarization in politics by working with the Aspen Institute to create a program for state politicians centered around three-day philosophical seminars that would bring people together and help build bridges across party lines.

For his second example, Eisgruber lauded Lin-Manuel Miranda, the creator and star of the hit musical "Hamilton."

"Unlike most musicals, 'Hamilton' is self-consciously and unabashedly political, and, unlike most things political, it appeals powerfully to both sides of the ideological spectrum," Eisgruber said. "Lin-Manuel Miranda has thus done something that neither our politicians nor our current Supreme Court seem capable of doing, namely, he has produced an intelligent and inspirational account of the American founding that transcends political lines."

Eisgruber said that Princeton's own "struggles with history" — notably the "reckoning" this year with "Woodrow Wilson's racism and, more broadly, with this University's exclusionary past," underscore the need to understand one another and to address the future collectively.

Said Eisgruber: "We need to be able to see other people's points of view, and we must forge shared spaces for disagreement and deliberation. And understanding one another requires, among other things, finding new ways to comprehend the history that has affected, and continues to affect, different groups and individuals in different ways."

In closing, Eisgruber encouraged the graduates to return often to Nassau Hall with updates on their progress as they bring "leadership and engagement" to help address such challenges. With his congratulations and best wishes, he said, "We are proud of you, we will miss you, and we eagerly anticipate what you will achieve, because all of you are now, and forever shall be, part of Princeton's Great Class of 2016!"

In May, Princeton celebrated Reunions and a number of graduation events, concluding with the University's 269th Commencement ceremony. (Video by Danielle Alio, Office of Communications) 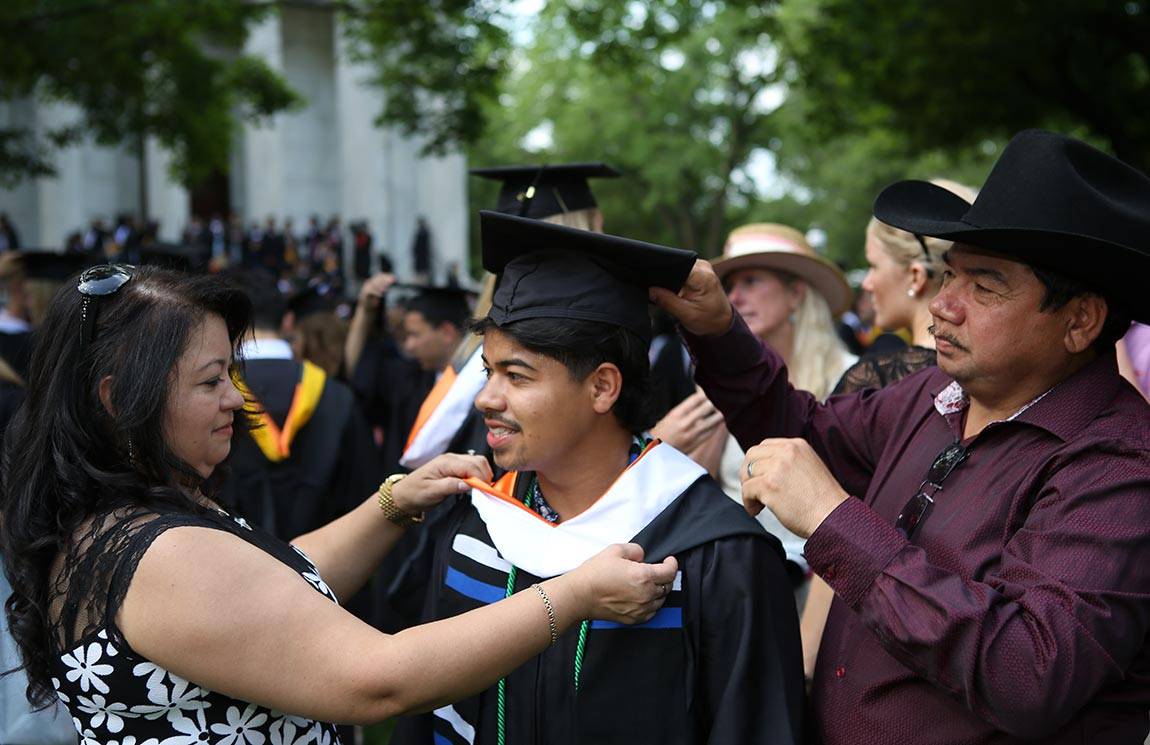 Fidelina Martinez (left) and Juan Leiva (right), natives of El Salvador who live in Trenton, New Jersey, help their son Gerson Leiva (center), the first in his family to go to college, get ready before the processional. (Photo by Noel Valero for the Office of Communications)

Platt said she initially was daunted to speak to her fellow students who represent such "exquisite variety" and whose time at Princeton has been "rich with difference."

She described how as a Princeton student she has become more aware of how important it is to have the right to speak — and how crucial it is to listen.

"As we fixate on the right to speak, we cannot forget its attendant imperative: to listen," Platt said. "I hope that all of us might listen to others with compassion, with care, and with a keen awareness of the responsibility that we carry as speakers. Because the truth is that we never speak only for ourselves. The things that we say, and the things that we do not say, change the lives around us."

Kim delivered the salutatory address in Latin. This Princeton tradition dates to the first Commencement in 1748, when the entire ceremony was conducted in Latin. The Latin Salutatory, Princeton's oldest student honor, began as a formal address but today often contains humorous tributes and a warm farewell to Princeton campus life.

In her address, Kim honored her classmates and said [English translation]: "We have shared many experiences — suffering wounds caused by meningitis vaccines, surviving floods and blizzards, fighting (and often losing) battles with our schoolwork, etc. … I leave you with this this: Seize the day — and the years to come!" 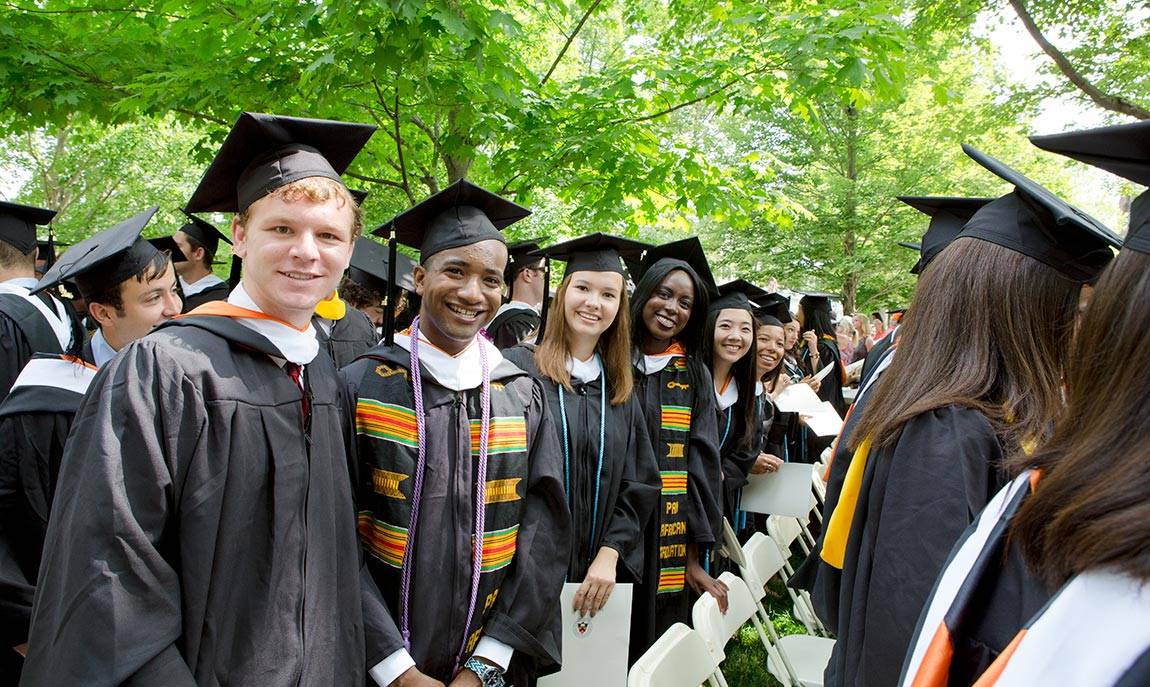 Seniors smile for the camera in unison while standing on front campus. (Photo by Denise Applewhite, Office of Communications)

The University awarded degrees to 1,291 undergraduates in the Class of 2016, five from former classes and 906 graduate students. It also conferred honorary degrees upon six people for their contributions to the humanities, journalism, law, medicine and public service: Ben Bernanke, former Federal Reserve chairman who previously served on the Princeton faculty; Eric Foner, the DeWitt Clinton Professor of History at Columbia University; Robert Rivers, retired surgeon and Princeton alumnus; Shuli Hu, journalist and founder of Caixin Media in China; Bryan Stevenson, public-interest lawyer and founder of the Equal Justice Initiative; and Froma Zeitlin, the Ewing Professor of Greek Language and Literature, Emeritus, at Princeton. 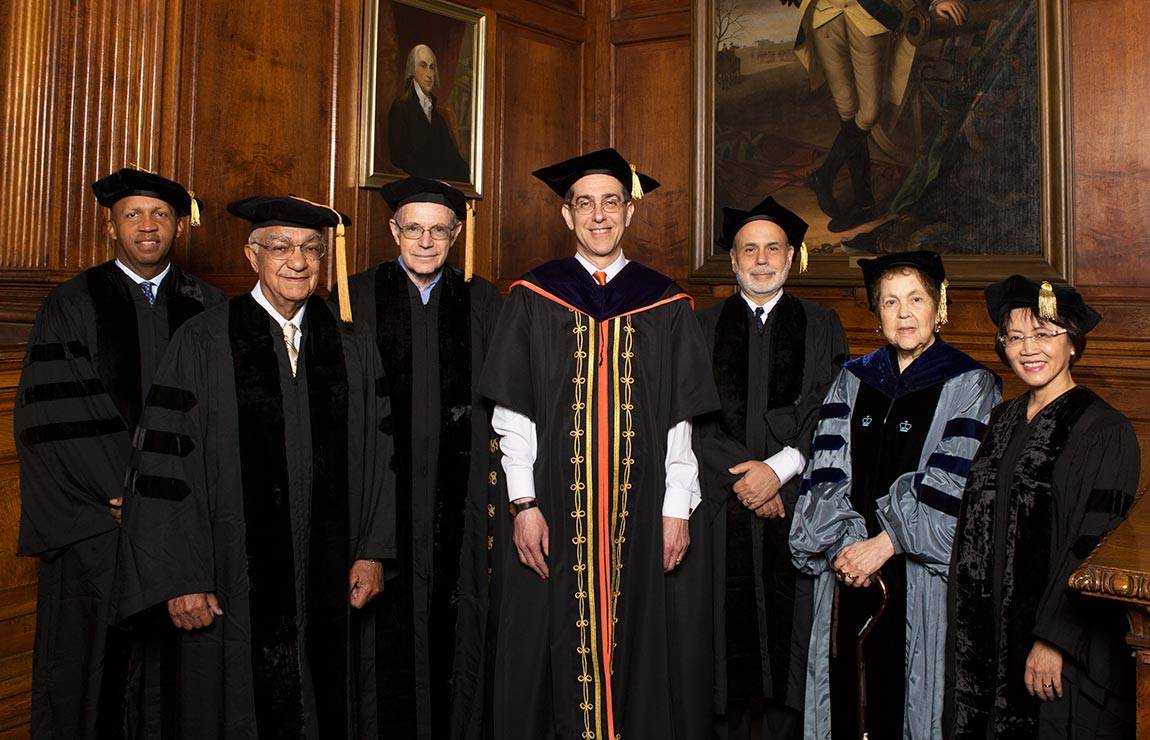 On May 30, seniors were recognized at Class Day ceremonies in the University Chapel, rather than on Cannon Green, due to the threat of thunderstorms. The keynote speaker was best-selling novelist Jodi Picoult, a member of the Class of 1987.

Picoult urged students to stay true to their moral compass. "Thanks to years of lessons from your parents and your friends and your professors, the knowledge of what is right already burns inside you like a pilot light. … In fact your only job, as an official grownup, is to not lose sight of that flame."

In the afternoon, advanced-degree recipients participated in the Hooding ceremony in Jadwin Gymnasium, where Dean of the Graduate School Sanjeev Kulkarni congratulated the students. More than 100 degree recipients elected to be hooded by their faculty advisers in recognition of the close mentoring relationship that often develops during graduate study.

"Our purpose today is to recognize the efforts, dedication and accomplishments of our graduates, to congratulate them on completing master's and doctoral programs, and to celebrate their transitions into a broad range of careers in which they will achieve distinction over the coming years," Kulkarni said.

Randall Kennedy, a 1977 Princeton alumnus, former trustee and the Michael R. Klein Professor of Law at Harvard Law School, spoke at the interfaith Baccalaureate service May 29 in the chapel. He called on the Class of 2016 to advocate for higher education.

Kennedy said: "Insistence upon academic freedom. Facilitation of respectful deliberation. Joy in academic discovery. Delight in artistic brilliance. A determination to do better tomorrow than we did today. These are the representative features of the Princeton that inspires us, the Princeton we admire, the Princeton we love, the Princeton in whose honor we ought to be ambassadors for higher education."

Webcasts of Princeton graduation events will be available on the University's Media Central website. 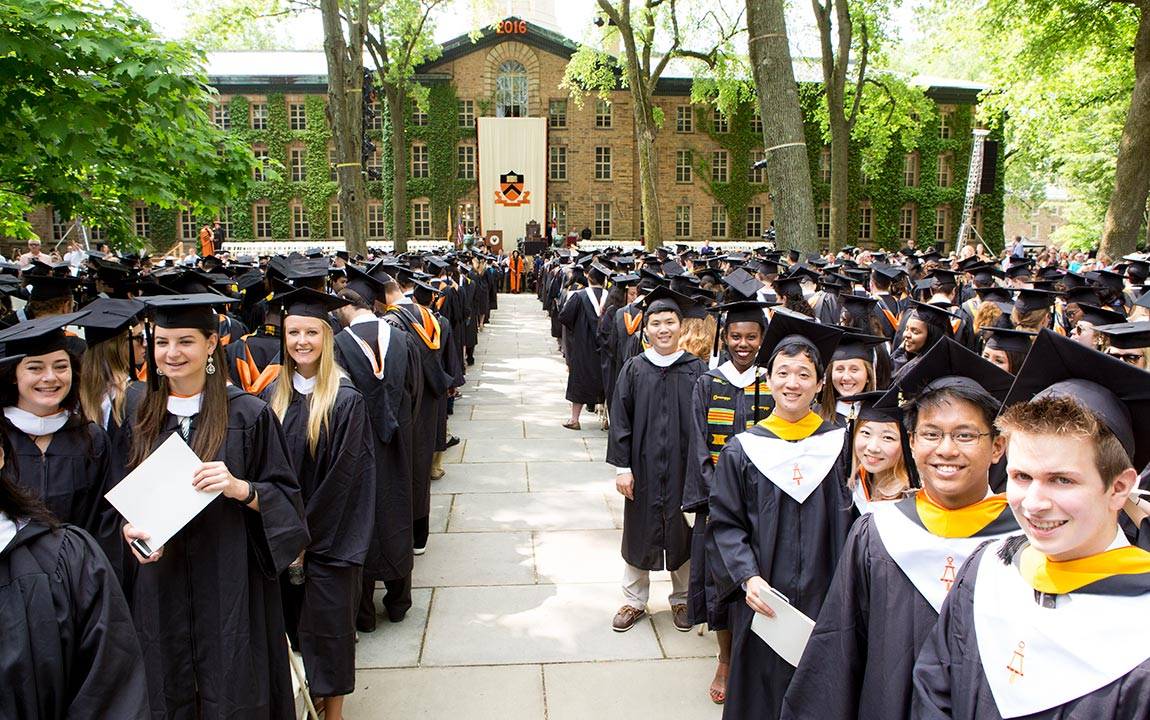 Undergraduate and graduate students stand and face the center walkway leading to Nassau Hall as they await the arrival of faculty members during the opening procession. (Photo by Denise Applewhite, Office of Communications) 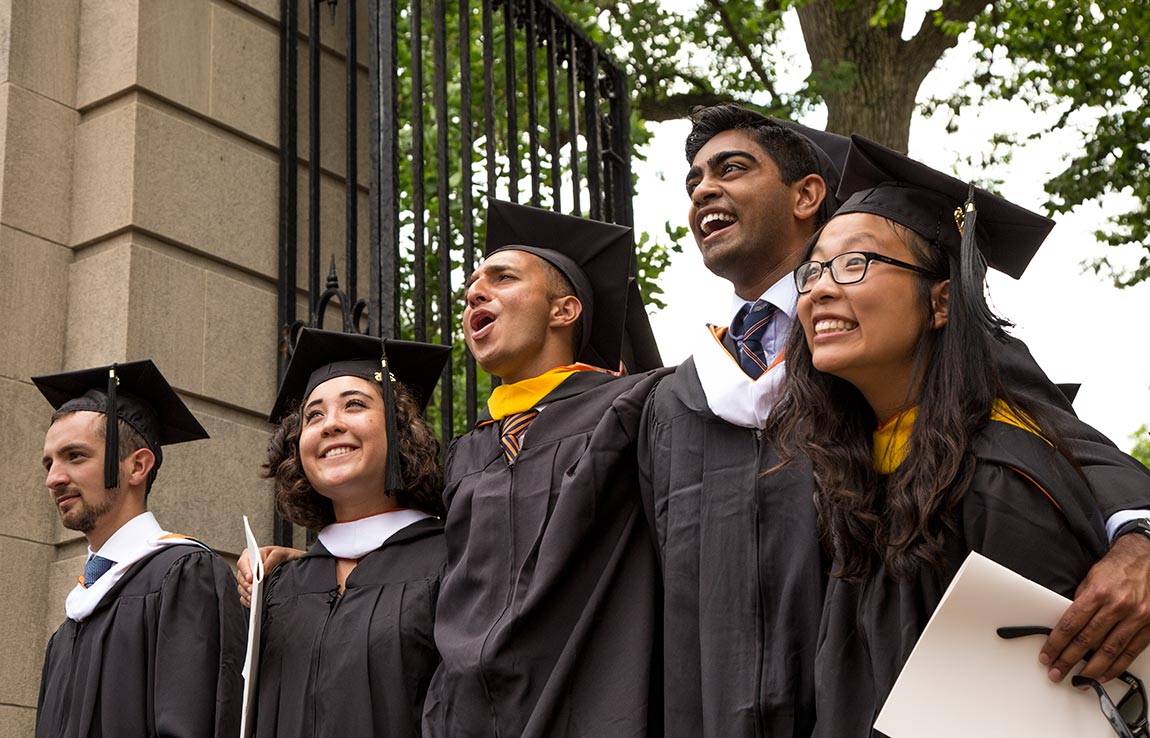 Having just stepped through FitzRandolph Gate, these members of the Class of 2016 celebrate receiving their degrees from Princeton. (Photo by John Jameson, Office of Communications) 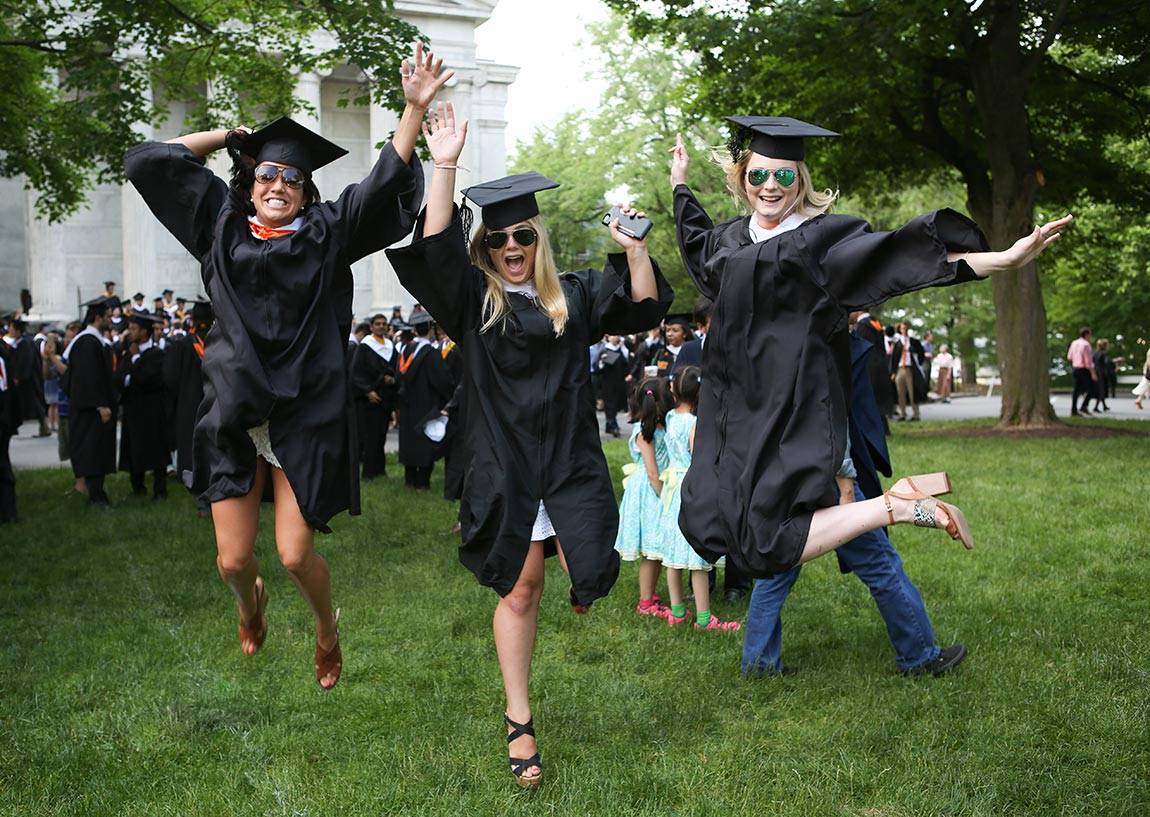 Seniors Phoebe Brown (left), Kimberly Klein and Kristin Lukins jump for joy on Cannon Green before the start of the ceremony. (Photo by Noel Valero for the Office of Communications) 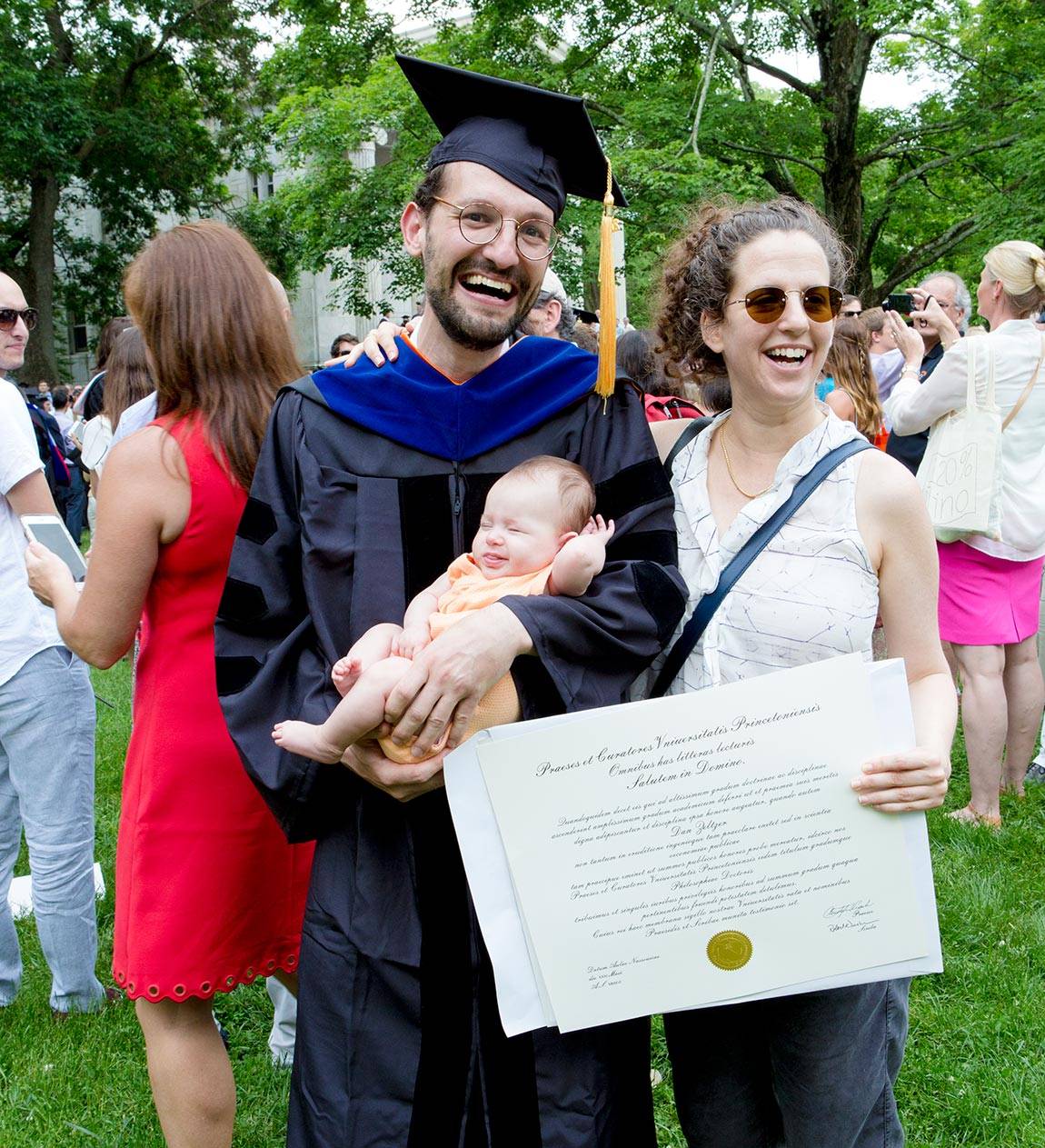 Dan Zeltzer, who earned a Ph.D. in economics, celebrates his graduation with his wife, Efrat Kedem, and their 3-month-old daughter, Amalia. (Photo by Denise Applewhite, Office of Communications) 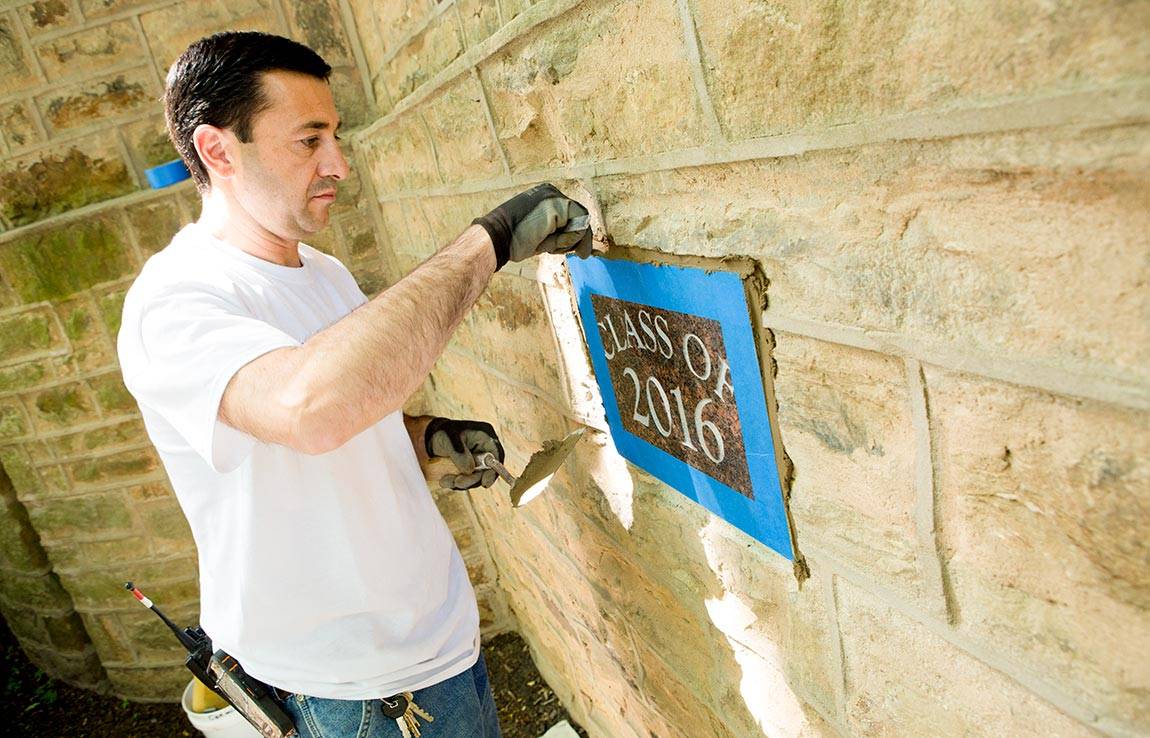 Carmine Fiocca, lead mason in the University's Mason Shop, applies the final mortaring around the Class of 2016's commemorative stone on the northeast corner of Nassau Hall on Wednesday, May 25. The stone, made from "Dakota Mahogany" granite quarried in South Dakota, continues a tradition of honoring classes on Nassau Hall that dates to at least 1869. (Photo by Denise Applewhite, Office of Communications)